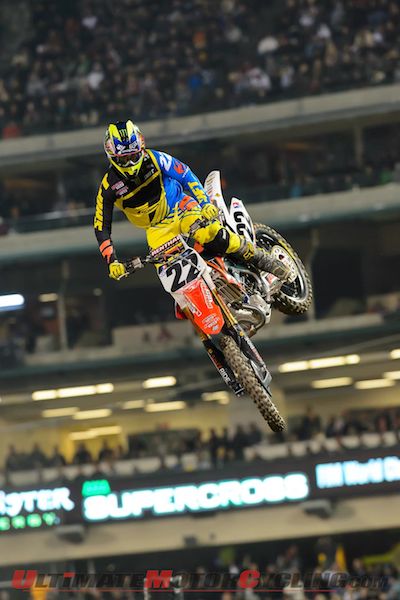 2013 Monster Energy AMA SupercrossMotorcycle Mechanics Institute (MMI) has signed on as an official sponsor of the three-hour live streaming broadcast of SupercrossLIVE! at each of the Monster Energy AMA Supercross, races (2 – 5 p.m. local time), Feld Motor Sports says.As the only place to follow live video coverage of practice and qualifying from Monster Energy SX, SupercrossLIVE! provides fans with afternoon racing coverage and an inside perspective before the gate drops on the night’s qualifying and Main Events.To access the live stream, visit SupercrossOnline.com or subscribe to the SupercrossLIVE! streaming channel.Jim Holley, a former World Supercross Champion, and Kevin Barnett, a former member of the U.S. Men’s Olympic Volleyball Team and professional broadcaster, host the three-hour Supercross LIVE! program.Holley and Barnett provide in-depth analysis of the Monster Energy Supercross practice and qualifying sessions as the riders and teams prepare for the night racing, in addition to interviews and behind-the-scenes coverage.Kim McWaters (Chief Executive Officer, UTI) says: “Motorcycle Mechanics Institute’s legacy is built upon our industry relationships and the quality training we provide to our students. We’re thrilled to be the exclusive sponsor of SupercrossLIVE! and share our passion for this event with thousands of motorsports enthusiasts across the country.”Ken Hudgens (Chief Operating Officer, Feld Motor Sports) says: “We are so pleased to have our longtime partner, Motorcycle Mechanics Institute, sign on as a sponsor of the all-new SupercrossLIVE! show.“After two successful online broadcasts with phenomenal viewership already this year, it’s obvious that fans around the world want this content and will continue to tune in every week.”For more information on the Monster Energy AMA Supercross, an FIM World Championship, please log on to SupercrossOnline.com, the official website of Monster Energy Supercross.Submitted by Feld Motor Sports