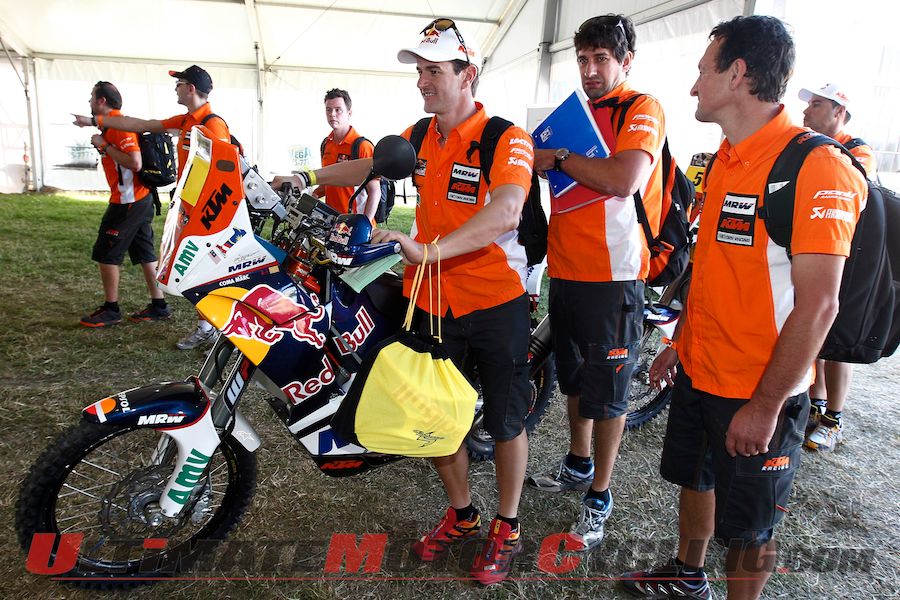 2012 Dakar RallyThe final step in preparation for 2012 Dakar was completed New Year’s Eve for the MRW Red Bull AMV KTM team of Marc Coma and Joan PedreroComa’s and Pedrero’s KTM 450 Rally Dakar motorcycles passed all the administrative and technical verifications at the naval base in Mar del Plata, where 2012 Dakar begins.But it was a long day – and week – for the MRW KTM team. After a year of physical training and practicing, Coma, Pedrero and the MRW KTM team arrived in Argentina last Wednesday.On Thursday, Coma and Pedrero tested the KTM 450 Rally motorcycles on a motocross circuit. Then the bikes and team were transported to the naval base where final mechanical revisions were made Saturday morning before the tech and administrative inspection.With the bikes set for the 33th running of the Dakar Rally, the MRW KTM team can now focus on personal preparations for the first stage on Sunday, which will run 474 miles from Buenos Aires to Santa Rosa de la Pampa, with the first 35 miles times.MRW KTM says: “In front there are 3 countries -Argentina, Chile and Peru-, nearly 9.000 kilometers (5600 miles) and 14 stages through South America. Marc Coma, helped by Joan Pedrero, will face tomorrow with full confidence the next fifteen days to try and be the first to get to Lima, where he wants to win his fourth bronze touareg.”Marc Coma says: “Finally we passed the scrutineering and everything is fine. We are looking forward to start after these days in Mar del Plata, with all the accumulated tension.“Truth is they are difficult moments, that we dedicated to distribute the luggage and the material we will need during the Rally. Now we can have our minds only set in the race.”Joan Pedrero says: “Truth is that it is a relief to pass the scrutineering, because it is a difficult part of the race, quite cumbersome.“Everything went perfectly and this is when you are grateful to be in a team like the MRW Red Bull AMV Team, because there never are problems, everything is under control and very professional.“I am very grateful to the team because everything is ready and we can start to prepare the last few details and focus in the start.”