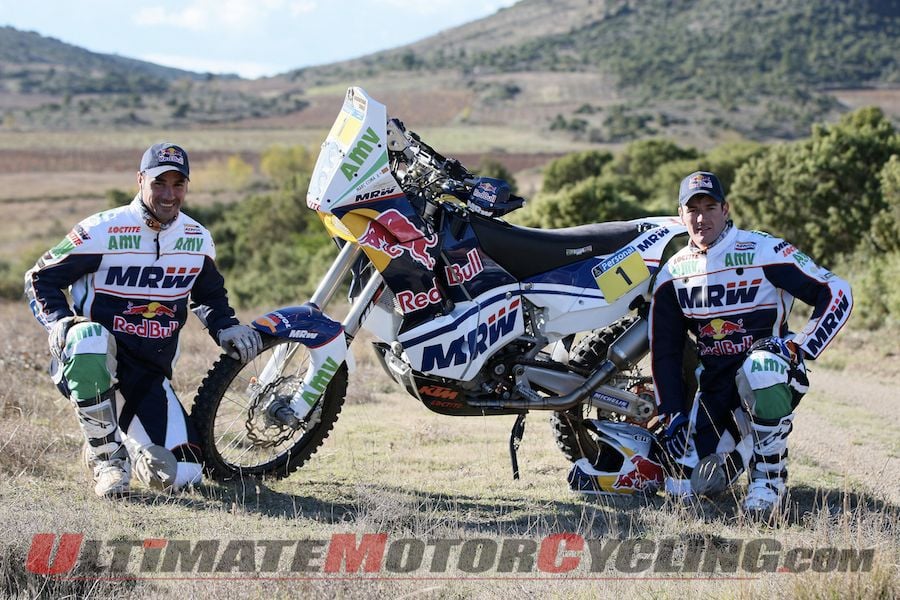 2012 Dakar Rally PrepWith 2012 Dakar only four weeks away, teams are prepping as much as possible, gathering all important information for hopeful success.One team that recently wrapped a four-day test was the MRW KTM team of Marc Coma and his support rider, or “water carrier,” Juan Pedrero. Both Spaniards tested the factory KTM 450 Rally bikes in Morocco, following old tracks used in past Dakar rallies.During the four-day Dakar Rally test, last year’s champions gathered information after many miles on the 450 Rally bike, which KTM says has “undergone overall updates and improvements to the 2011 model on which Coma and Despres successfully absolved the bike’s maiden Dakar ride, finishing 1-2 after 17 days grueling competition.”The test took place on technical tracks of the High Atlas, to the deep dunes of the Sahara desert, environments very similar to where the 2012 Dakar Rally will challenge Coma and Pedrero (Argentina to Peru).MRW KTM says three-time Dakar winner Coma (2006, 2009, 2011) and Pedrero “did different stages, following old tracks used some years ago for the mythical African race and were able to practice both navigation -a key element at the Dakar-, as well as the required technique to tackle the Moroccan dunes and tracks.The MRW KTM team didn’t stop with just riding during the day, though; Coma and his team also practiced working on the 450 Rally while it was dark out, replicating real Dakar conditions.MRW KTM reports “In a race such as the Dakar, where any failure can ruin the work done along thousands of kilometres, the riders must know the tiniest detail and screw of their bikes. That is why the work of the MRW KTM Team also included practice of the way to repair key elements, thus completing a comprehensive preparation for this unforgiving race.”The 2012 Dakar Rally begins Jan. 1, 2012 in Mar Del Plata, Argentina, and travels almost 3100 miles to finish in Lima, Peru, on Jan. 15.