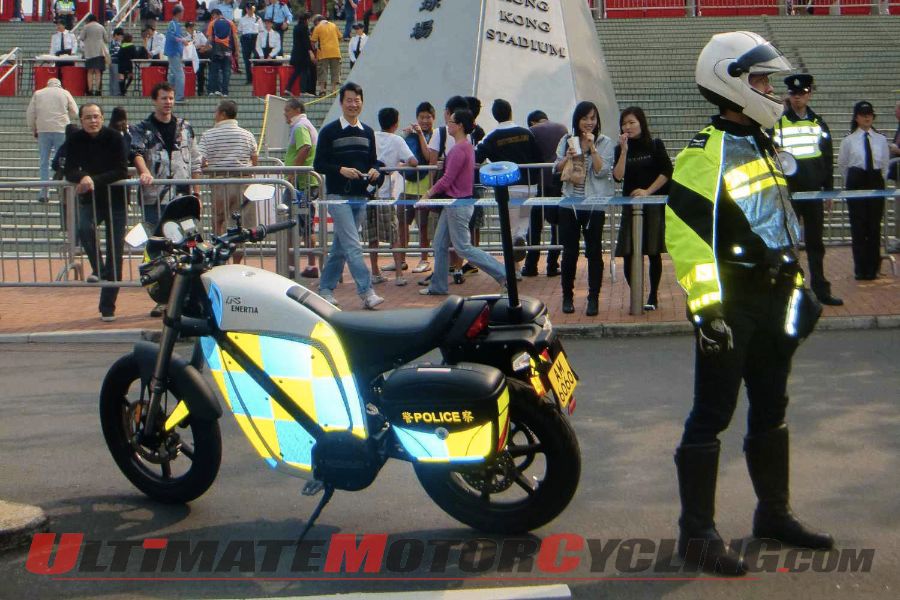 Electric Motorcycle NewsAfter studies were conducted to see what electric vehicles will be utilized by multiple sectors of the Hong Kong Government, the administrative region of China decided on Brammo.Brammo, a lead player in the electric-motorcycle industry, will replace “existing conventional petrol motorcycles in the Government fleet which have been in service for several years.”The Hong Kong Government chose the 2012 Enertia Plus LE (Law Enforcement) for the police department; this model is based on the civilian Enertia Plus, but features special equipment specifically for police use. The standard-issue Enertia Plus will be used year-round by the Water Supplies Department.Brammo reports that the electric motorcycles will be supplied through Brammo’s exclusive dealer in Hong Kong, JCAM Advanced Mobility Company Ltd. (JCAM).Craig Bramscher (CEO and Founder of Ashland, Oregon-based Brammo Inc.) says: “This is a significant milestone in the adoption of electric vehicles by governments. As the world’s leading manufacturer of electric motorcycles, we were confident that we would lead this change and we are delighted that we have started here in Hong Kong with some of the most EV-engaged leaders in the world.”Matt McGuire (Managing Director, JCAM) says: “We are enthusiastic about strengthening our relationship with the Hong Kong Government through the supply and support of premium performance electric motorcycles to help them achieve vehicle emissions reduction initiatives.”Brammo’s first-in-class product has garnered widespread attention and support since its initial introduction to Hong Kong streets over one year ago. Among its early advocates was Secretary of Commerce Gary Locke, who admired the Enertia Plus at an all-U.S. Electric Vehicle Showcase over which the then-Secretary presided in May 2010 at Hong Kong’s Disneyland, as part of the Clean Energy Mission he led to Hong Kong and mainland China.Andrew Wylegala (Chief Commercial Consul of the American Consulate General in Hong Kong) says: “The U.S. Foreign Commercial Service is pleased to see that a leading U.S. electric vehicle manufacturer such as Brammo is supplying its world class products to the Hong Kong Government.“Hong Kong plays a unique role as a regional trendsetter and commercial hub, and the Hong Kong Police Force, in particular, enjoys a sterling international reputation, so I am confident that this contract represents but the first of many future sales for Brammo and other U.S. electric vehicle manufacturers.”About Brammo
Brammo, Inc., is a leading electric vehicle technology company headquartered in North America. Brammo designs and develops electric vehicles including the Encite, Enertia, Empulse and Engage motorcycles. Brammo is the current TTXGP eGrandPrix champion of North America. Brammo is an OEM supplier of its innovative Brammo Digital Drivetrain systems including the Brammo Power battery pack and Brammo Power vehicle management system. Brammo has vehicle distribution and marketing operations in North America, Europe and Asia. To learn more, visit Brammo.com.