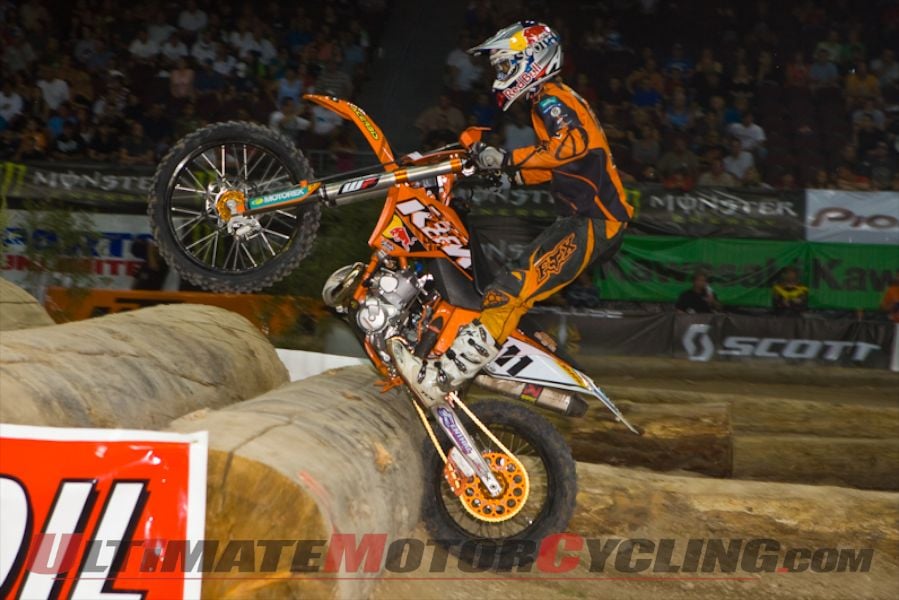 2011 AMA EndurocrossRed Bull/KTM Factory rider Taddy Blazusiak blasted his way to a sixth consecutive victory in the AMA Endurocross Series to retain his perfect scorecard in front of a sell-out crowd at the Idaho Center in Boise. But Factory FMF/KTM rider Mike Brown earned a strong second place finish to keep the championship alive until the finale in Las Vegas, Nevada.The championship will now be decided in the final double round in Las Vegas in November and it remains to be seen if KTM’s extreme Enduro specialist from Poland can retain the title and his perfect results.Blazusiak and Brown both started strong turning the fastest hot laps of the night to secure first gate pick in their heats. Brown went on to win heat number one, Blazusiak heat number two and Justin Soule took the win in the final heat.In the main event, Blazusiak got off to a powerful start by launching his KTM to the front of the pack to nail the holeshot. Brown came around the first corner in second place and began a battle with Soule for the position. The two swapped positions a few times before Brown made an aggressive move to make the pass stick.Brown was able to keep Blazusiak in his sights for the first half of the race before Taddy turned up the heat, stretched the lead and grabbed yet another victory in what has been an epic season for the Polish rider. Brown went on to finish second and Geoff Aaron earned third. KTM riders soaked up five of the top 10 places in this exciting competition that is growing in popularity with every event.The series next heads to Las Vegas for a double format main event. Brown is the only rider that has a chance to challenge Blazusiak for the title in Vegas. For more information on the season finale go to endurocross.com.Next Event: Las Vegas EnduroCross – November 19, 2011 – Orleans Arena2011 Boise Endurocross Overall Results:
1. Taddy Blazusiak – KTM
2. Mike Brown – KTM
3. Geoff Aaron – Honda/Christini
4. Justin Soule – Kawasaki
5. Gary Sutherlin – Kawasaki2011 Boise Endurocross Overall Championship Point Standings:
1. Taddy Blazusiak – 180
2. Mike Brown – 127
3. Geoff Aaron – 118
4. Cody Webb – 103
5. Justin Soule – 103