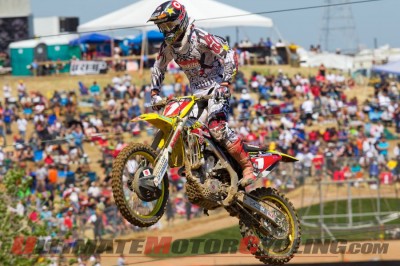 Yoshimura-backed teams once again showed their dominance and the performance advantage of their Yoshimura products Saturday during the AMA Pro Motocross Championship season opener at the 43rd Annual Rockstar Energy Hangtown National.

The Rockstar Makita Suzuki and Honda Racing teams put their Yoshimura products to the test in a successful campaign at Hangtown.

Team Rockstar Makita Suzuki’s Ryan Dungey and his Yoshimura-equipped Suzuki RM-Z450 were strong from the get go, with two solid practices that gave him the eighth gate pick for moto one.

A great start put Dungey near the front, just behind teammate Metcalfe. He worked his Suzuki into second in lap two and made a charge for the lead, which he was able to grab in lap six. Dungey powered his RM-Z across the finish for the first 450 moto win of the year.

In moto two, Dungey had another strong start, which put him in second place, and he was able to pass for the lead in lap six. Dungey fell back to second in lap eight and battled for the lead for the remaining laps but was unable to make the pass and finished second. His one-two moto finishes gave him a second-place overall for the day. Dungey is tied for the lead in the season points going into next weekend’s event in Texas.

Ryan Dungey (Rockstar Makita Suzuki RMZ450F) says: “Overall, our day was really good. We had a good, strong setup on my Suzuki from practice and my Rockstar Makita Suzuki team made just a few adjustments, which made it even better for the two motos. I got good starts today, which was very helpful.

“I was able to get out in front and pull away for the win in the first moto, which was a good start to the season. I wasn’t able to get the job done in the second moto and ended up in second for the moto and second on the day. It’s a really good solid start for the season. There’s a lot of motos and a lot of racing. We’ll keep moving forward and building from here and we’ll be good.”

Dungey’s teammate, Brett Metcalfe, had a great first day back on his RM-Z and started by scoring the seventh fastest lap in practice. In moto one, The Rockstar Makita Suzuki rider blasted his Suzuki out of the gate and into the front. Metcalfe ran in second for the first two laps before falling back and finishing fifth. Metcalfe had a solid start in moto two and rode strong to move from tenth to eventually cross the line with another fifth-place finish. His five-five moto finishes gave him fifth overall for the day.

Brett Metcalfe (Rockstar Maktia Suzuki RMZ450F) says: “It was really awesome today,” said Metcalfe. “It’s good to be back with my Rockstar Makita Suzuki team after being out injured for a while. My Yoshimura-equipped RM-Z was unreal this weekend. It is good to be back racing and I really like the outdoors, so that’s a plus for me. I wanted to get a good start to the season and I’m really happy with this five-five and fifth overall finish.

“Coming away, we got a good load of information and learned a lot that will help give me a little more speed out there by making me more comfortable, and then I’ll be able to be more aggressive. I’m really looking forward to the next round in Texas so I can build on this result.”

With American Honda Racing’s Trey Canard and Josh Grant unable to compete at the opening round due to injuries they sustained during the Supercross season, veteran Honda racer Kevin Windham made his return to the factory Honda squad aboard an American Honda Racing-prepared CRF450R.

Making a strong impression at his motocross season debut with the team, Windham catapulted out of the start gate in moto one, grabbing the holeshot and maintaining the lead for six laps-much to the delight of the crowd. As the race went on, Windham relinquished several spots before finishing moto one in sixth position. The likeable Honda racer made up a few spots in moto two, finishing in fourth place to earn fourth overall.

Kevin Windham (GEICO Honda CRF450F) says: “I had very little time to prepare for outdoors because I was off the bike while I waited for some internal bleeding to stop after my crash at the final race of the Supercross season.

“However, I feel like today went really well and I’m happy with fourth overall. We came out here pretty much still a work in progress and just gave it our all. I’m happy about getting the holeshot in the first moto and that I held it for six laps. I know I have the bike to win and pretty soon I’ll get the legs to be able to hold onto the lead.”

The Yoshimura-backed team’s next event is the second round of the 2011 AMA Pro Motocross Championship on Saturday, May 28, at the Rockstar Energy Freestone National in Wortham, Texas.