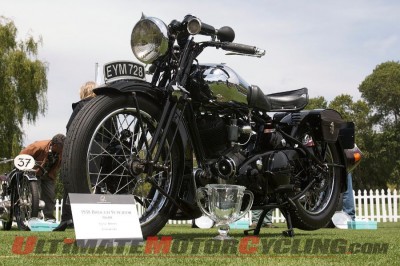 Isle of Man TT Quail Lodge GateringOn May 14, 2011, more than 1,500 motorcycle enthusiasts and collectors attended the third annual Quail Motorcycle Gathering at Quail Lodge Golf Club in Carmel, Calif. The daylong celebration paid tribute to A Century of Racing at the Isle of Man, while also showcasing nearly 200 of the top motorcycles from the past, present and future.Motorcycles on display included the world’s most famous motorcycle, the John Edgar Lightning, star of the renowned “Bathing Suit Bike” photograph, shot at the Bonneville Salt Flats in 1948. Unveilings included Falcon Motorcycles’ Black Falcon, which was designed and engineered around the engine of a 1952 Vincent Black Shadow.This motorcycle underwent more than a year of engineering and design by founder Ian Barry and his team. So-Cal Speed Shop, known for custom car creations, also debuted its new line of limited edition motorcycles, the Miler, which are reminiscent of flat-track Triumph racers from the 1960s and 1970s.Other key motorcycles on display included a 1929 Sunbeam Model 90 TT, winner of the 1929 Isle of Man TT, a 1938 Brough Superior SS-80, a 1961 BSA Goldstar and Avon Motorcycle Tyres 100th Anniversary Bike, built in celebration of its incredible milestone and custom painted by renowned airbrush artist Carlos Avelar. In addition to admiring the aesthetics and engineering of the rare bikes and mingling with fellow collectors and enthusiasts, guests enjoyed live entertainment by The City Limits Band and a barbeque lunch prepared by the culinary team at Quail Lodge Golf Club.Bonhams & Butterfields’ highly-anticipated auction set a new record with the sale of legendary actor and racer Steve McQueen’s 1971 Husqvarna 400 Cross motorcycle – a machine identical to the one he famously rode shirtless on the cover of Sports Illustrated – at an estimate-shattering price of $144,500. A 1925 BMW R32, an early and very rare motorcycle from the Bavarian Motor Works which would become the blueprint for all subsequent BMWs, also sold for $139,000 – what is believed to be a new record for the model.The Quail Motorcycle Gathering concluded with the Circle of Champions awards ceremony presented by Breitling. For the first time, full concours judging was offered for those enthusiasts interested in entering a motorcycle and competing for an award in their class.The appreciation for the wide variety of motorcycles represented at The Quail Motorcycle Gathering was acknowledged by a select group of motorcycle industry experts, The Quail Motorcycle Gathering Judges Committee who chose the motorcycles in their respective class that they believed was most deserving of the award.This year’s Quail Lodge Motorcycle award winners:Best of Show
1938 Brough Superior SS-80 owned by Gene BrownIsle of Man Award
1925 New Hudson Factory Racing owned by Paul HudsonInnovation Award
1990 DNEPR Diesel owned by Treven BakerCompetition Sport Award
1948 Indian 648 B16 Base Scout owned by Don EmdeDesign and Style Award
1966 Velocette Thruxton owned by Frank and Elizabeth RecoderCustom Award
2011 So-Cal “Miler” owned by Terry KargesCycle World Award
1966 Velocette Thruxton owned by Richard VarnerVetter Fuel Economy Challenge Winner
2010 Hayes Diesel MD690R1 owned by Fred HayesAntique through 1940
First place: 1910 Pierce Arrow Four Cylinder owned by C.C. Kasik
Second place: 1924 BMW R-37 owned by Gary LewisJapanese through 1978
First place: 1977 Honda GL1000 owned by Albert Catelani
Second place: 1976 Yamaha XT500c owned by Steve CaseyEuropean through 1978
First place: 1957 Triumph TR6 owned by Robert Jordan
Second place: 1954 BMW R-68 owned by Tim StaffordCompetition through 1978
First place: 1961 Bultaco TSS 125 Factory Prototype owned by Randolf Reed
Second place: 1968 Honda CL175 Roadster owned by Michael A. Polkobla