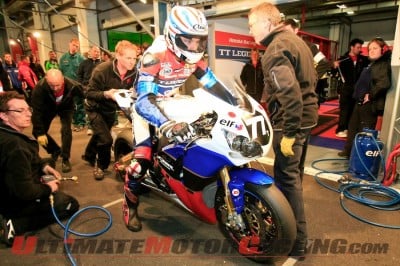 2011 Endurance World ChampionshipThe Honda TT Legends team is ready to improve on its fifth position out of 53 at the opening round of the 2011 Endurance World Championship last month at Bol d’Or (24 Hours).The team taken the time off to prep for this weekend’s race in Albacete, Spain; the “8 horas Nocturnas of Albacete” will run from 6 p.m. on Saturday, May 21, until 2 a.m. on Sunday, May 22.Isle of Man TT stars John McGuinness and Steve Plater are set to race in Spain, with Keith Amor set as a reserve rider.Here’s what the Honda TT Legends Team had to say heading into the 8 Hours of Albacete:John McGuinness (Honda TT Legends CBR1000RR) says: “I’m really looking forward to Albacete. We had a steady start at the Bol d’Or and we got a top five position so I think we could do alright this weekend.“I really just want to get back on the bike, get stuck in and get some laps in. We tested at Albacete a while back and we found a good base setting for the bike. Steve’s on fire at the moment, we’re both bike fit and strong – we’re as ready as we’re ever going to be.”Steve Plater (Honda TT Legends CBR 1000RR) says: “We have a completely different approach this time around. Not only is it an eight hour as opposed to a 24-hour race but it is also a completely different circuit.“It’s a more aggressive, busy track and it’s much more suited to my riding style so I’ll be pushng hard. It’s still a difficult task as there are only two riders instead of three this time, but I’m really looking forward to it. It’s my kind of race, I’ve won there before so hopefully we can get a bit nearer to the podium.”Keith Amor (Honda TT Legends CBR 1000 RR) says: “The Bol d’Or was a trip into the unknown but we did it, we did well and we’re going into the second round with open eyes. We are much more aware of what we are up against this time and I think that can only work in our favor really. It would be good to improve on our position.”Neil Tuxworth (Honda TT Legends Team Manager) says: “The team did an excellent job at the Bol d’Or 24-hour, we learned a huge amount but we know that we still have a lot to learn. This is a very different race, it’s a much shorter race and we only have two riders competing instead of three.“As with the Bol, our main objective is to finish but of course this time we would like to try and improve on our position and the aim is to be in the top four. To go out and win at this stage would be very, very difficult as we are up against incredibly experienced teams and riders – but anything can happen in endurance racing.”