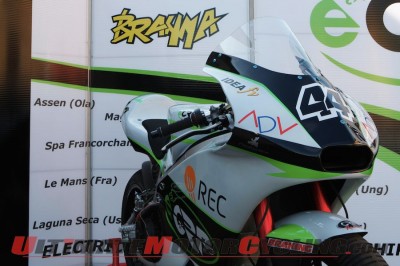 Electric Motorcycle RacingOn Thursday, April 7 at the Bobino Club in Milan, CRP Racing officially presents its electric racing motorcycle, the eCRP 1.4, the eco-friendly workhorse that will compete in the FIM e-Power and TTXGP with Alessandro Brannetti (# 44), the rider confirmed by the Italian team.CRP staff told their guests how innovative ideas grew into the creation of the Italian electric motorcycle and how the bike became the TTXGP European Champion and Vice World Champion in 2010.The team’s accomplishments have generated substantial interest and support in Italy and abroad; especially in the U.S., where fans are waiting with great enthusiasm for the arrival of the first modern electric motorbike that we can proudly say, was made in Italy.The eCRP 1.4 is the evolution of version 1.2 and it strikes a cost-effectiveness balance for competition in electric racing. CRP Racing has engineered a motorcycle that handles extremely well and has the ability to provide a stable and predictable platform for the rider. Proper weight distribution and use of proven racing technology allows the eCRP 1.4 to weigh in at just 160kgs total.The eCRP 1.4 uses a lithium-polymer 7.4Kw/h battery module to power dual DC motors. It can reach a top speed of 220 km / h and accelerates from 0 to 100 km / h in 3.2 seconds with 120 Nm of torque at 100 percent.The 2011 workhorse is distinguished by a datalogger that can record the values from sensors for front and rear suspensions and throttle position.It is also able to measure volts / amps into and out of the controller, and monitor the temperature of the motors (updated in 2011) and controller. All this data will be integrated with the GPS that records speed, acceleration and trajectory in real-time, with the objective of increasing the rider’s and team’s ability to be effective in practice and at the race. Better information is key to improving racing strategies.In Milan, CRP will not speak only about racing: the step from the track to the road is short, especially when the manufacturer has a history of more than 40 years at the top of the motorsport and automotive industry.Technological know-how and a concern for the environment are the guiding principles behind CRP Racing’s goal of a street-legal electric motorcycle.The sustainable mobility project will see the creation of a 100-percent electric super sport motorbike which will be previewed at EICMA, the international two-wheel exhibition.Meanwhile, CRP is pursuing strong relationships within the green economy. A partnership signed with E-move.me (www.e-move.me) will bring the eCRP 1.4 to the Fuori Salone along with other electric vehicles. Additionally, CRP is grateful for and the support of companies such as REC Group  and Idea FV, which has helped it achieve other meaningful results.These partners have viewed the project of eCRP as the right opportunity to convey a respect for the environment through sporting competition, with the aim of providing their expertise in the development of new energy technologies for a better future.An example of this commitment, which the official sponsors REC Group anf IdeaFV are the proponents, is represented by a roof made of photovoltaic panels that can be used at the paddock.Ivano Zanni (Managing Director REC Solar for Italy and Spain) says: “Our relationship with CRP was born from the desire of REC to be on track with an undisputed star of the green revolution in the field of motorsport, oriented to innovation and technology research, hallmarks shared by REC Group. eCRP, the electric motorcycle, becomes even ‘greener’ if it is recharged with solar energy produced by REC Peak Energy photovoltaic modules, which are known for their high energy performance and reduced carbon footprint.”Andrea Docci (CEO of Idea DV) says: “Idea FV was one of the first Italian companies to offset its CO2 emissions by using photovoltaic systems on our property. Electricity used at our sites by all of our personnel and in our manufacturing processes is offset by solar power produced by the modules. It actually produces many more kWh than we need so this surplus will be ‘turned over’ to eCRP: all European trips (travel for the eCRP personnel) will then be CO2 Free! ‘Ours’ will then be the cleaner championship.”The project eCRP contains within itself the contribution of other companies such as Magni (compressed air systems and maintenance), EmilTecno (electrical and residential and industrial thermal-hydraulic plants), TTM (metal heat treatment), AGV (helmet manufacturer) Braking (disc brakes), Domino (motion controls), Govecs (electric scooter support paddock at European races) Motorex (lubricants and products for the care of the bike), Norway (back cover) and Kelly Controller (motor controller).Thursday in Milan the curtain will raise on CRP’s project of sustainable mobility. The eCRP has been able to combine technology, environment, and future on two wheels.