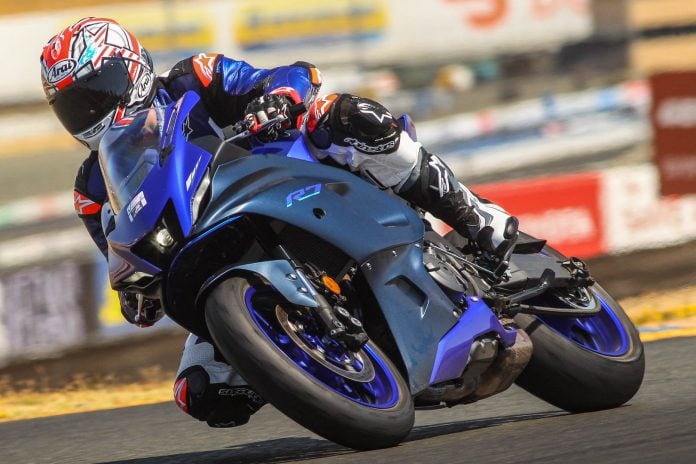 The Alpinestars Supertech R is the Italian marque’s range-topping race boot, designed for and with input by some of MotoGP’s brightest stars. What’s good enough for them is good enough for us, says Alpinestars, providing track day enthusiasts, club racers, and street riders with the same kind of protection and comfort that graces professional feet across the globe.For 2021, the Supertech R boot takes its next evolutionary step with a redesigned front flex area and rear bellow, a new TPU shifter and shin plate, a new top gaiter, a larger shin slider, and an updated inner bootie that all add up to increased comfort, flexibility, and a racier fit. Best of all, these new features don’t come at an additional price, with the MSRP remaining $499.95. 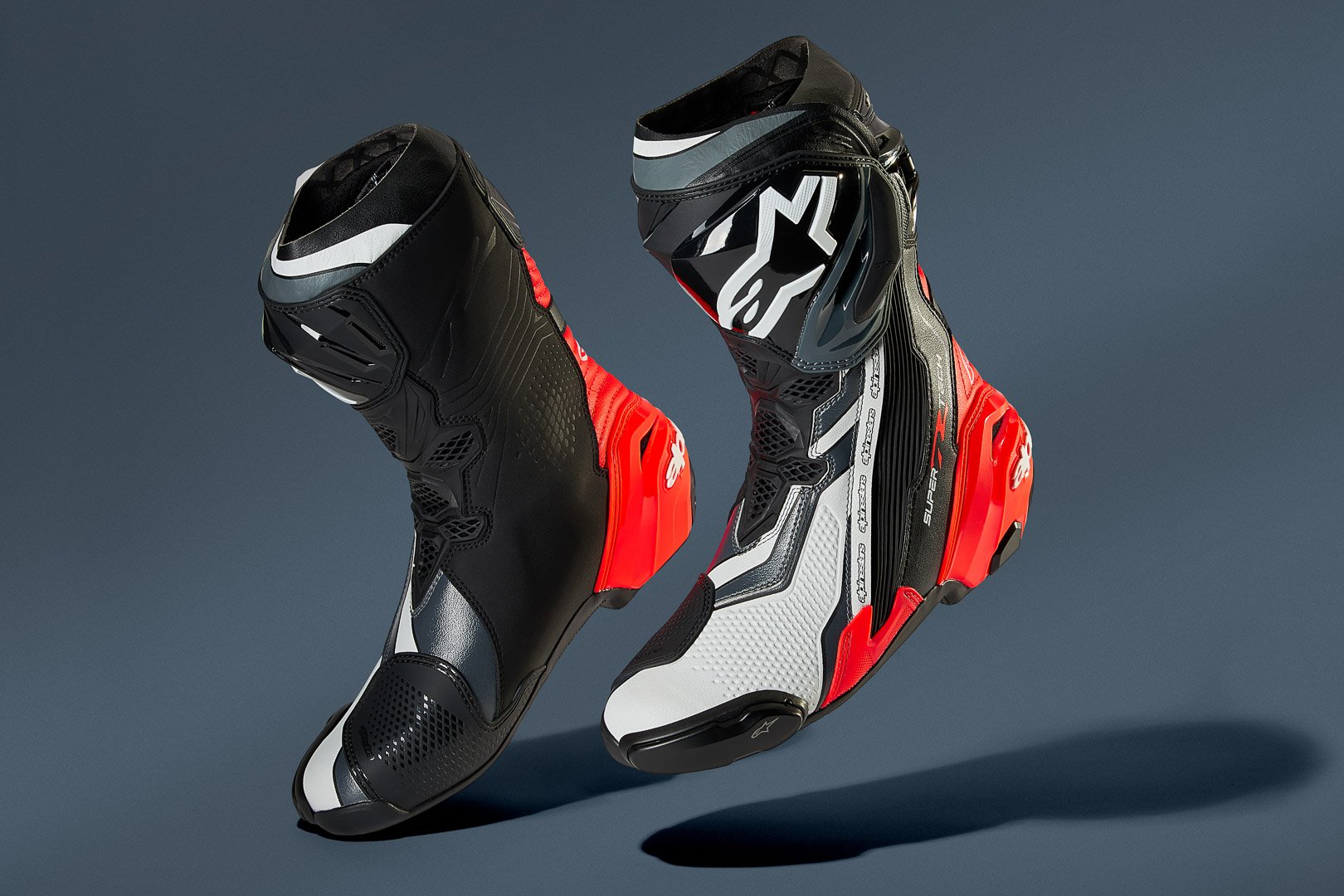 There are two versions of the new Alpinestars Supertech R—vented and standard. We tested the vented version. Except for the perforations and a colorway deviation, the two versions of the boot are identical and have the same price.Well, if you’re going to test road racing boots, you might as well do it in its natural habitat. Luckily enough, we had the opportunity to saddle up on the 2022 Yamaha YZF-R7 and latest Yamaha YZF-R1 during the Yamaha R/World Track Day at Sonoma Raceway, hosted by Z2 Track Days—held exclusively for Yamaha owners. Subsequent all-day street rides confirmed my feelings—one of the best is incrementally better.As is tradition for the Supertech R, the boot takes a two-pronged approach to protection. The inner-bootie provides the all-important torsional protection that helps prevent unwanted lateral or medial movement—excessive flexing side to side and left to right. The second safeguard is the high-quality leather outer boot, which mitigates impacts and abrasion resistance by using sturdy toe and heel boxes. There are also ample TPU guards at the ankle, shin, and heel, and replaceable sliders throughout. Notably, the Supertech R doesn’t deviate from one of its original goals to create a boot that requires no break-in period. They’re ready to rock right out of the box. 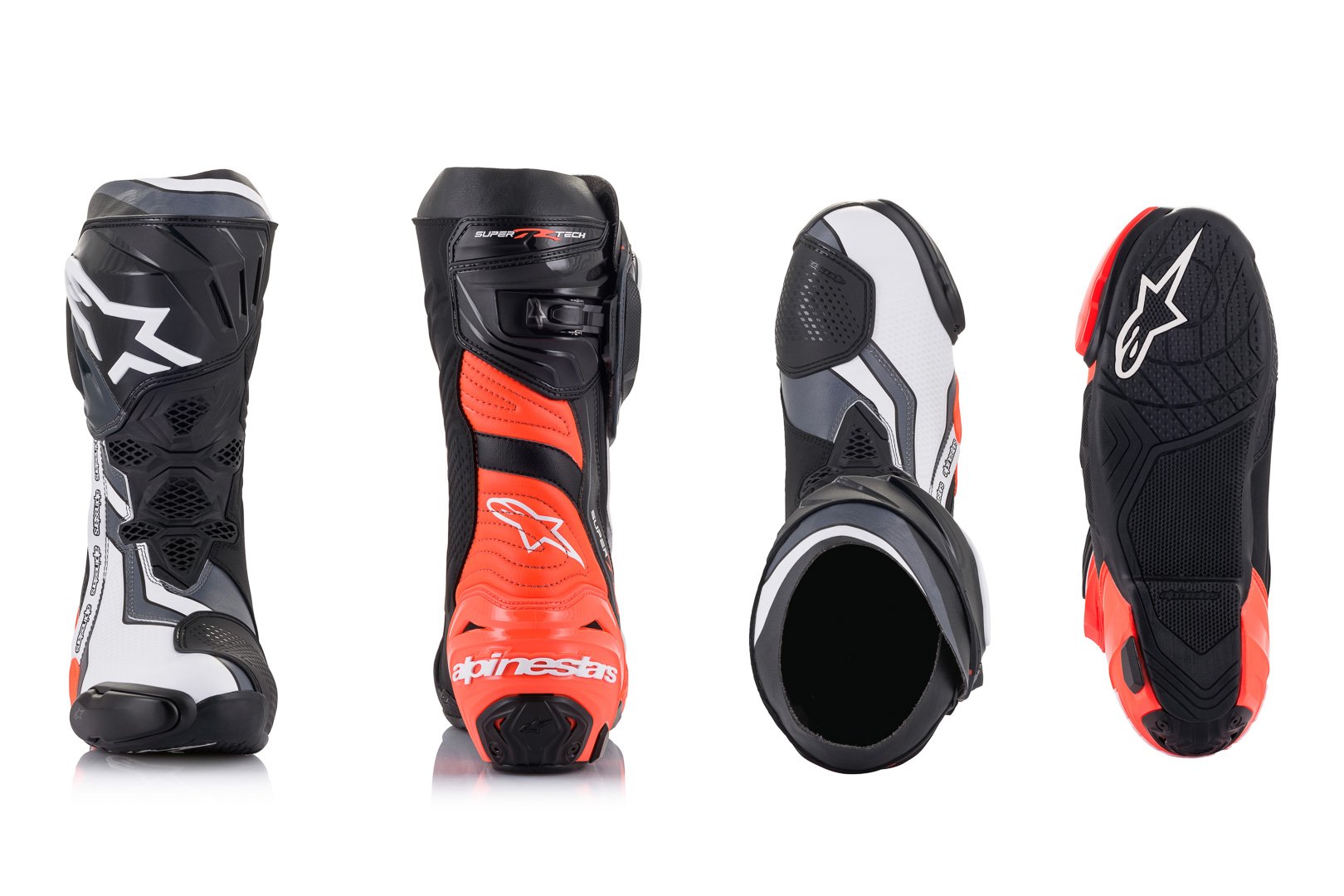 Let’s begin with what’s fresh on the inside and work our way out. The updated inner bootie uses the same supporting plastic bits as before, and adds a new, downright luxurious, tight-weave mesh material with soft TPU reinforcement in the toe and side areas, along with additional padding in the ankle region. Taken together, those updates make the fit slightly snugger and more comfortable. Additionally, the rubberized material in the shift region makes aggressive shifting less taxing, especially when using aftermarket rearsets with knurled shift pegs, without sacrificing tactile feel.Another benefit of the rubberized regions is that they prevent me from feeling the pointier plastic protective bit of the bootie against the outside edge of my foot when wearing thinner riding socks. Now, that isn’t the case. There’s also a new loop that makes pulling the whole shebang on much easier. A word to the wise regarding the speed-lacing system: Don’t tug them tight from the top. Snug things secure from the bottom up to ensure that the laces last for many seasons—a tip that extends to all boots with speed laces. There’s also a new locking mechanism that releases from the sides and isn’t as fussy.Moving to the exterior, the most apparent change is the new textured synthetic microfiber panel on the medial side of the boot, replacing the chamois-like material of the past that tended to fold, fray, and become worn with prolonged use. The new microfiber panel has flex areas baked in that should work to its benefit. Then, as it does now, the medial side of the boot doesn’t get caught up against heel guards or other hard parts.A huge benefit of using a supportive bootie for your lateral and medial protection on the interior is that those features don’t protrude from the boot’s exterior, potentially hanging up on heel guards. Check out fellow Italian brands such as Forma, Sidi, or TCX for examples of boots that add those protection features to the exterior.Riders with bigger calves will be glad to know that a larger TPU accordion panel allows the boot to stretch and zip up with less effort. While the 2015 model featured TPU accordion paneling, it was still a challenge to zip up for those of us that don’t skip leg day. Alpinestars also beefed up the TPU slider near the zipper for additional crash protection and ensuring these kicks will survive abuse. Also, the shifter pad extends further down the interior of the boot for additional slide protection. The quintessential rubberized honeycomb protection is reshaped, which in conjunction with a new rear bellow, allows a little more forward flexibility. Whether using non-ventilated or ventilated boot versions, you’ll still get some airflow through the honeycomb areas, which helps. Speaking of which, the ventilated versions here breathe nicely. At the top of the boot sits a new TPU shin guard that features a larger replaceable shin slider, brought on by the extreme lean angles achieved by modern MotoGP pilots. For the ordinary rider, that equates to an extra bit of replaceable crash protection.Where grip is concerned, the Supertech R’s sole sticks to your footpegs and communicates loads of feedback through the controls. Although the tread pattern and shape are the same, Alpinestars says that a lighter weight compound is now used.Flagship footwear comes with the expectation of supreme comfort, protection, and utility, which the Supertech R delivers in spades. Those that are hitting the track, racing, or want top-tier protection for street outings should try on a pair. If you’ve donned the previous Alpinestars Supertech R boots and enjoyed them, rest assured that the incremental improvements are yet another step in the right direction.Action photo by Got Blue MilkAlpinestars Supertech R Boots Fast Facts2021 Alpinestars Supertech R Boots Price: $500 MSRP (standard and vented)