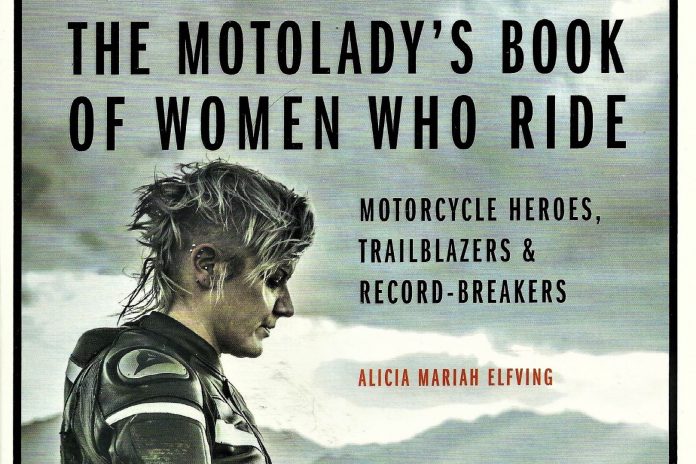 It is with some embarrassment that I have to admit that many of the remarkable women featured in Alicia Mariah Elfving’s new book, “The Motolady’s Book of Women Who Ride,” were unfamiliar to me.I thought I was pretty well-informed about motorcycle sport and almost all aspects of it, including the machines, the events, the records, and the people who make it all happen. Turns out, I wasn’t; I was missing quite a few people and their accomplishments.Thanks to Ms. Elfving’s book, I am now considerably better informed and I enjoyed getting caught up, as well.It turns out, there’s even more to the stories she tells about each of her individual subjects. While it’s true she covers women who are flat track racers, road racers, land speed record holders, creative custom bike builders, epic adventure riders, risk-takers, and history-makers, she reveals even more.Among their number are entrepreneurs, philanthropists, caregivers, leaders, supporters, survivors, friends, and just plain solid people. Among them are women who have seen hard times and adversity—and overcame. Now, they reach out to help others to do the same. 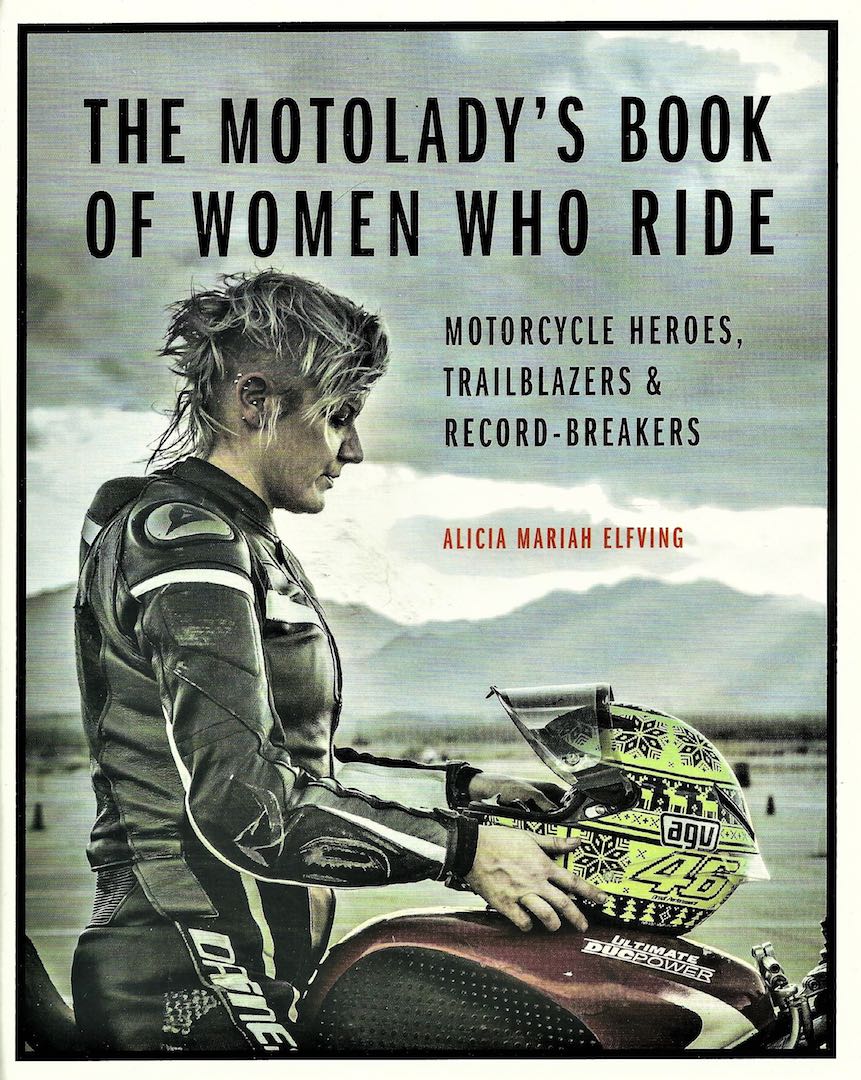 The book’s chapter titles lay it out: they are History Makers, Adventurers, Racers & Stunters, and Creators. In each chapter, Elfving introduces women, past and present, who have made contributions to the world of motorcycling and the motorcycle experience for women and, in large measure, for all of us who ride. The breadth of their accomplishments must have made it difficult to decide which categories some should be included in.For example, Effie and Avis Hotchkiss, a daughter (Effie) and mother duo who rode a Harley-Davidson sidecar rig from Brooklyn to San Francisco in 1915. To be sure, with poor roads of the time, sparse availability of service, parts, and fuel in some areas along the way, and potential for exposure to wild weather, this was definitely a history-making adventure making the pair the first to make such a cross-country journey, complete with the return trip.Elfving also recalls Adeline and Augusta Van Buren, sisters who, in 1916, rode their Indian motorcycles from New York City to Los Angeles, making them the first women solo riders to achieve that—and they became the first women to reach the summit of Pike’s Peak along the way.The objective was to demonstrate to the U.S. government that women could handle the rigors of military dispatch rider duty. Though their achievement didn’t change the policy at the time, they made history and set a benchmark for future adventure riders.The book tells of tough, resilient women who race, win and set records, such as Leslie Porterfield who came back from a 110-mph crash at Bonneville that caused serious injuries in 2007 to set a world speed record for a conventional motorcycle at 232.522 mph in 2008.And, another land-speed champion, Valerie Thompson, who as the fastest woman on two wheels has piloted a streamliner to 328 mph and holds eight land speed records.Then there’s Erin Sills who has set 45 land speed records including her mark of 237.275 mph for a partial streamliner. Not left out is the first woman to join the 200 mph Club, Marcia Holley who piloted Don Vesco’s Lightning Bolt Kawasaki streamliner to 229.361 mph at Bonneville in 1978.There are triumphant women on closed courses over the years; the 1960’s British TT challenger, Beryl Swain, Ana Carrasco Gabarron, the first woman to win a world championship in motorcycle road racing capturing the Supersport 300 World Championship in 2018.But the book looks deeper than the great racing, riding, adventure, creative talents, and mental toughness of the women it features. It tells of heart and soul—and that may be its most moving feature.There’s Sofi Tsingos, whose custom bike builds do more than stir the soul—they are raffled to raise money for charities such as St. Jude Children’s Research Hospital. Krystal Hess founded Motorcycle Missions, which helps veterans coping with PTSD. Brittany Morrow overcame a horrific motorcycle crash to become an advocate for motorcycle safety and a RiderCoach with the Motorcycle Safety Foundation. The list goes on.It is the book’s first entry that will probably touch you most; a story Elfving would rather not have had to write. It is devoted to the late, great Jessi Combs. Combs was, as Elfving says, an “Educator, welder fabricator, land-speed record holder, motorcycle builder, TV host, off-road racer, Queen of the Hammers, beautiful badass, intelligent woman.” Combs was a close friend and inspiration to ElfvingShe was the fastest woman on the planet, achieving a top speed of 522.783 mph aboard the North American Eagle jet car. She lost her life in a crash with that same vehicle during her third pass in the series wherein she had set that world record in August 2019.In all, Elfving introduces us to no less than 73 great women who each bring their one-of-a-kind talent, drive, and vision to the world of motorcycling, and the world in general. That is—if you don’t include the author, who as the founder of TheMotoLady.com, founder of the Women’s Motorcycle Show, journalist/photographer whose work has appeared in Cosmopolitan, Motorcyclist, and many others and whose Ducati Monster custom “Pandora’s Box” which has become known around the world. Yep—she brings the total to 74.Book Data: