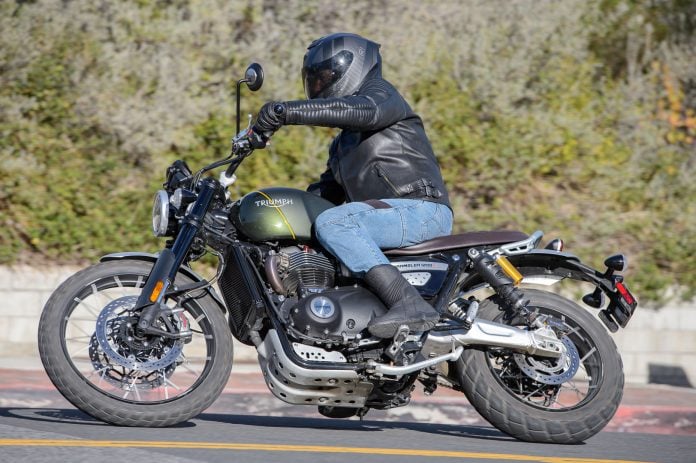 Certain motorcycles capture your imagination with styling and remind you that, for many of us, motorcycle riding is about fun above all else. The 2020 Triumph Scrambler 1200 XC, the junior member of the Scrambler 1200 lineup, is neither a high-performance street bike nor a highly capable dirt bike. Although the 1200 XC doesn’t quite harken back to the 1970s, when a scrambler was a street motorcycle with high pipes and a taller handlebar, it definitely favors the street over dirt riding.

The 2020 Triumph Scrambler 1200 XC uses the same Bonneville-branded 1197cc DOHC vertical twin 1200HP (High Power) powerplant utilized by several Triumphs in the Modern Classics line. The Scrambler 1200 gets its own tuning, as do other models using the motor. Non-intuitively, the Scrambler 1200 gets a higher-revving, higher-power version of the twin, rather than the grunty 1200HT (High Torque) iteration deployed in the upright retro-standard Bonneville T120. Usually, one would expect a torquier motor that favors lower engine speeds for dirt duty. Triumph inarguably presents the 1200 XC as a dirt-ready performer. It gets a 21-inch front wheel and long-travel suspension—nearly eight fully adjustable inches at each end—and quality units from Showa (inverted fork) and Öhlins (dual piggyback-reservoir shocks). While the wire-spoke wheels speak to the world of dirt bikes, the decidedly street-biased Metzeler Tourance tires do not. The fuel tank runs over $1500, so denting it in an off-road tip-over is an expensive proposition.Triumph describes the Scrambler 1200 XC as a “dual-purpose” motorcycle—the name given to dual-sport bikes from the 1960s to the 1980s. However, we think the Scrambler name is more accurate due to its street leanings, and there’s certainly nothing wrong with that. 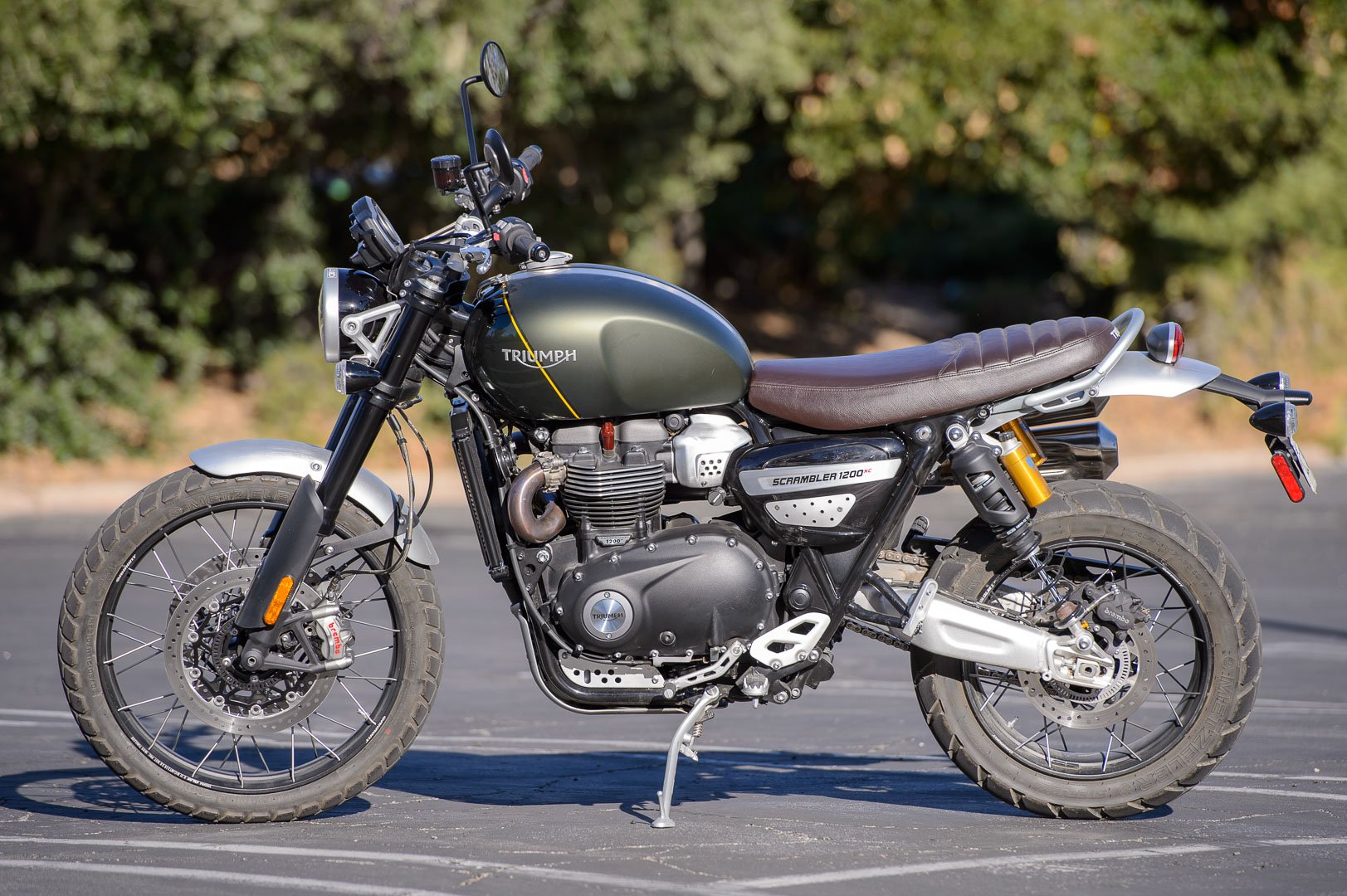 As a street bike that you don’t mind taking down dirt roads or on urban trails—something I particularly enjoy doing in the hilly parts of Los Angeles—the 2020 Triumph Scrambler 1200 XC nails the genre perfectly. Recalling the 1964 Triumph TR6C closely associated with Steve McQueen, the undisputed King of Cool, you can bathe in reflected glory. It is a motorcycle that is admired wherever you take it, and that indisputably an enjoyable part of motorcycle riding.The versatility of the Scrambler 1200 XC in urban, suburban, and rural settings is its calling card. Compared to the XE, the XC’s more aggressively off-road brother, the XC has a seat height over an inch lower, a wheelbase 1.6-inches shorter, and the rake is tucked in more than a degree. The XC’s 33.1-inch seat height makes the 500-ish pound motorcycle manageable in stop-and-go traffic for average-height (or more) riders, while the tidy 25.8 degrees of rake and moderate 60.2-inch wheelbase add to the XC’s city-friendly agility.Five riding models help the Scrambler 1200 XC handle whatever comes its way, and behave in a way that best satisfies the user. There are four preset riding modes—Sport, Road, Rain, and Off-Road—plus the customizable Rider mode that allows you to set the ABS, throttle response, and traction control to your liking. 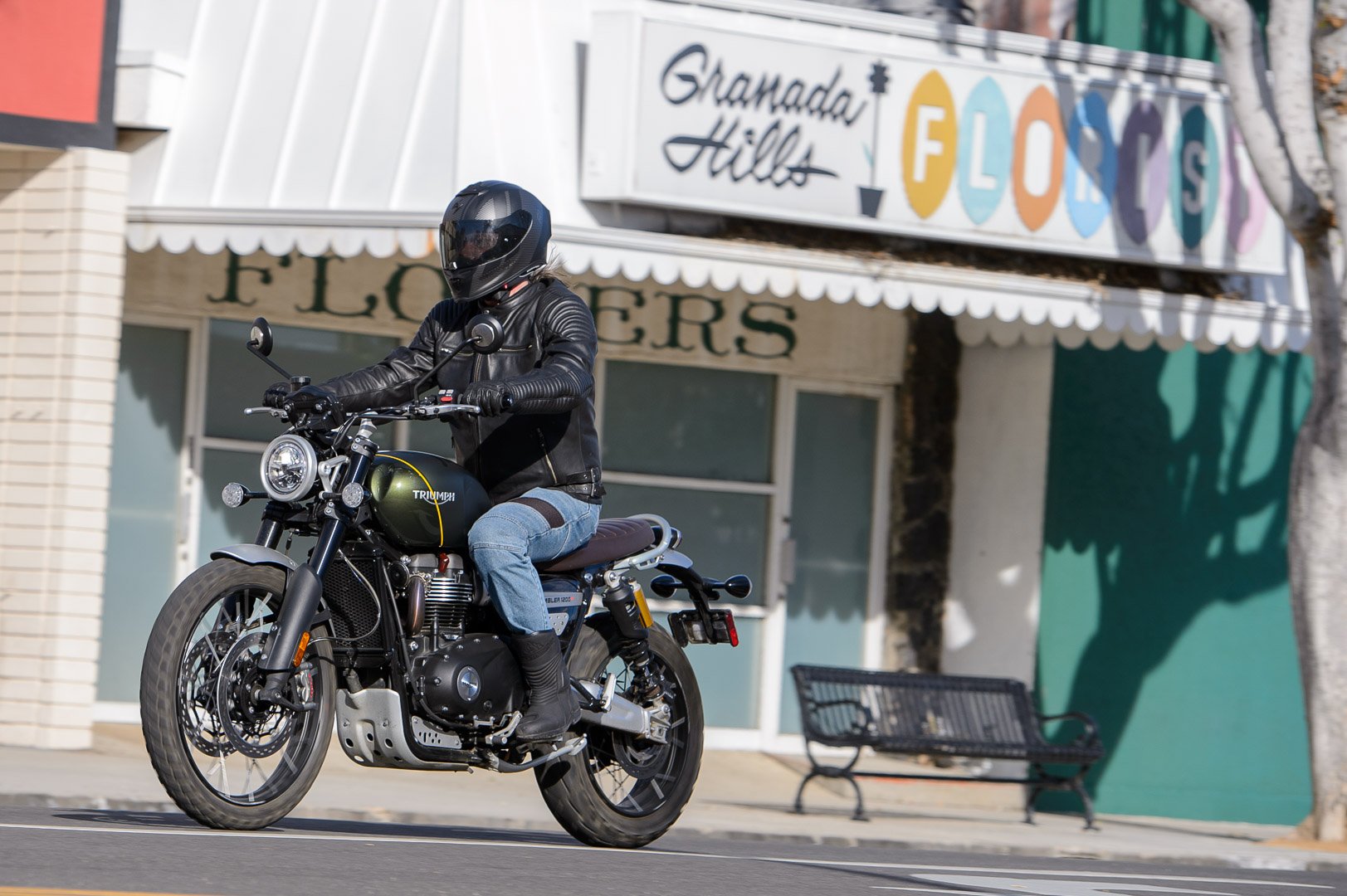 Of the preset modes, the Sport and Road aren’t that hugely different, though Sport does have a perceptively sharper throttle response. Traction control intervention is toned down in Sport compared to Road, though not especially noticeably.The Off-Road mode definitely has its own personality, and you absolutely want to select it in the dirt. The rear-wheel ABS is turned off and the front wheel intrusion lessened, while the traction control is even less meddling than the Rain mode. If you happen to forget to switch to Off-Road mode on the dirt, the Scrambler 1200 XC will quickly remind you as soon as you get hard on the throttle, as the traction control kicks in and the motor blubbers instead of winding up. Don’t ask me how I know this.The Rider mode has two parameters that you can set. ABS is fixed at the same level as Sport, Rain, and Road modes. You can only change the ABS behavior by selecting the Off-Road mode. There are four throttle response and traction control curves, all named after the riding modes.

Except when in city traffic, I prefer the sharpest throttle response offered by Sport, in conjunction with the slightly more aggressive Road traction control. It’s not a huge deal, as both Sport and Road preset modes are fully capable of providing a good time. The most assertive riders will like the Rider mode because they can defeat the traction control. Finally, you can make some adjustments within the preset modes—Triumph does make it easy to set up the motor to behave as you like.We did have an odd experience with the engine stalling when pulling away from a stop. Associate Editor Kelly Callan rode the XC before I did, and stalled it three times in a day. I gave her a hard time about it, until I hopped on and managed to do it twice. I don’t stall a motor from a standing start more than once every year or two, so this quirk got my attention. The off-idle behavior of the 1200HP’s tune needs some work. In the meantime, more revs before releasing the clutch is the cure—something Suzuki’s Low RPM Assist technology does transparently.The handlebar button array, TFT screen, and customizable display make it easy to swap between modes and settings—the UI is well thought out. The Chronos Theme display will appeal to those who want to add a bit of modernity to the ride, while traditionalists will gravitate toward the realistically retro Quartz Theme. Both are state of the art in how smoothly and effectively they display information to the rider. 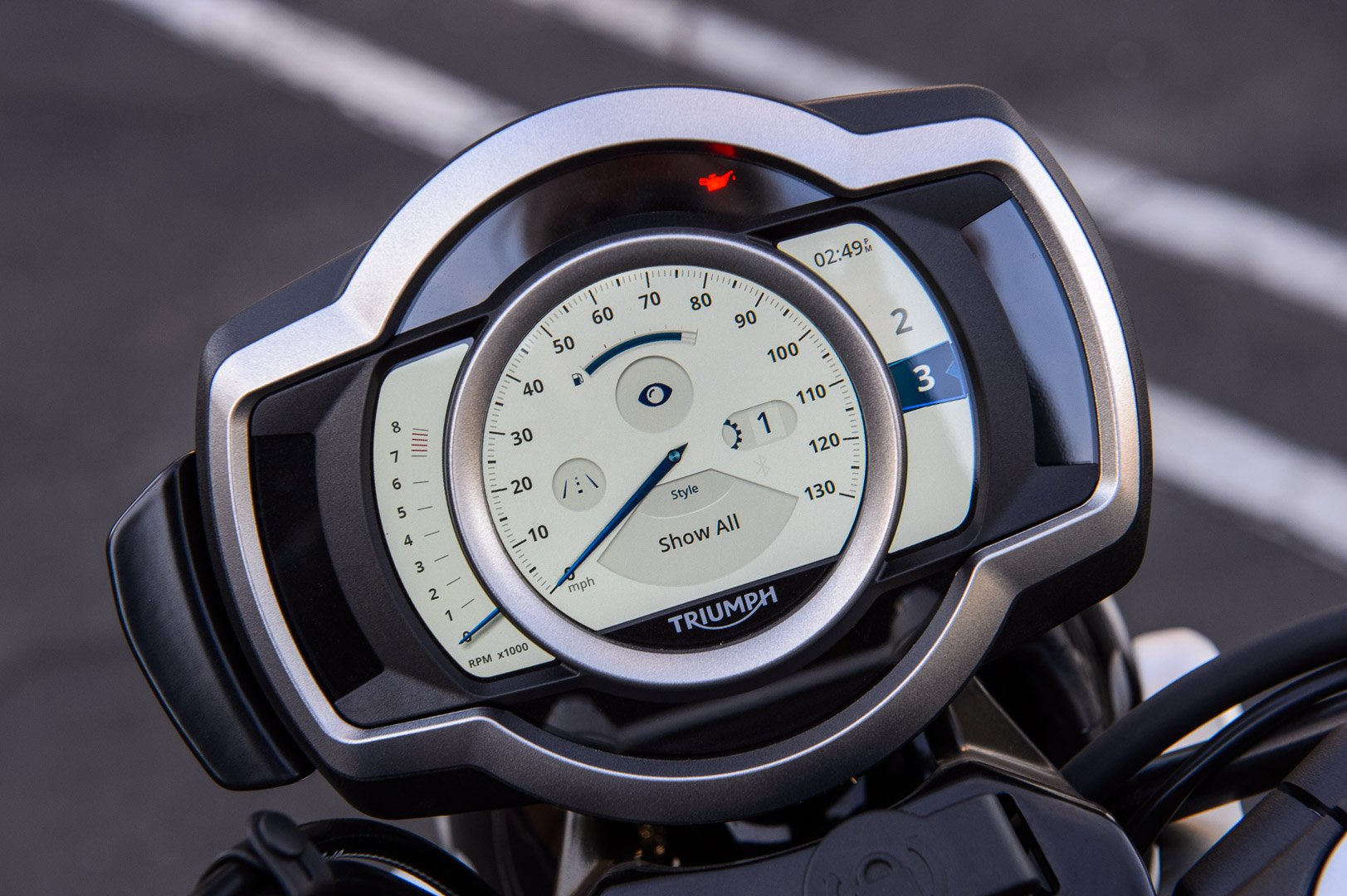 As someone with extensive off-road experience, the ergonomics of the 2020 Triumph Scrambler 1200 XC are natural. The vintage-style flat seat doesn’t just look good—it’s comfortable. It gives you plenty of room to move around, and it’s long enough to easily accommodate a passenger. Only long runs on the open highway will get old, even with cruise control, as the upright and arms-out seating position leaves you open to plenty of windblast. Everywhere else, the XC feels right at home.Riders in warm climates will quickly learn that most of the testing of the Scrambler 1200 XC was done in the cooler clime of central England. The catalytic converter in the nicely tucked-in upswept exhaust system starts roasting the rider’s right leg when engaged in stop-and-go traffic. Of course, in the wintertime, the warmth is almost welcome. There are aftermarket catalyst-free exhaust systems that will cut heat and weight, while increasing power and sound—we’ll let someone else determine the legality and desirability of any exhaust swap.That extra power isn’t really needed. The Scrambler 1200 XC has plenty of power around town and on the open road. In the twisties, that nice rumbling 270-degree crank pulls strongly through the rev range. The Tourance tires are more than adequate for the XC on the street, so you can get reasonably aggressive in the canyons, even with the 21-inch front wheel. All turning duties are performed with an intuitive grace, though the XC does not entice me to push my luck. 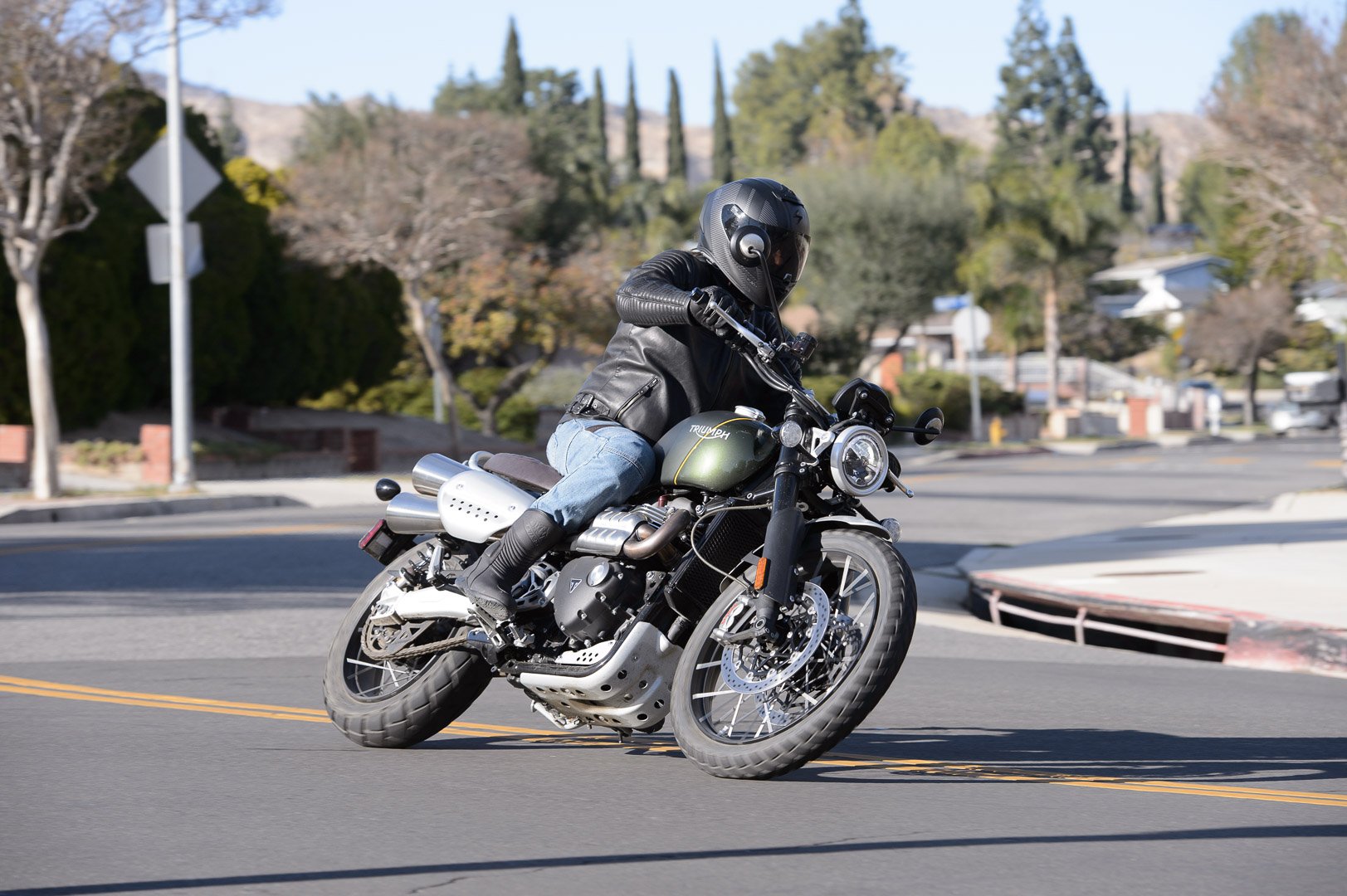 I took the XC out on a number of dirt roads, and it behaved predictably. Weighing in at around 500 pounds with the generous 4.2-gallon fuel tank filled, I wasn’t tempted to test the limits of the suspension. Hardpack urban trails are great fun, and the Triumph’s retro style significantly lowers the chance of angering a passerby should you be on an undocumented route.If you’re truly serious about taking a Scrambler 1200 off-road, the XE version is your Scrambler of choice. The XC is just capable enough off-road to provide plenty of fun at sensible levels of commitment. Yes, that’s a skidplate, but I can’t imagine hammering the XC through the rocks. 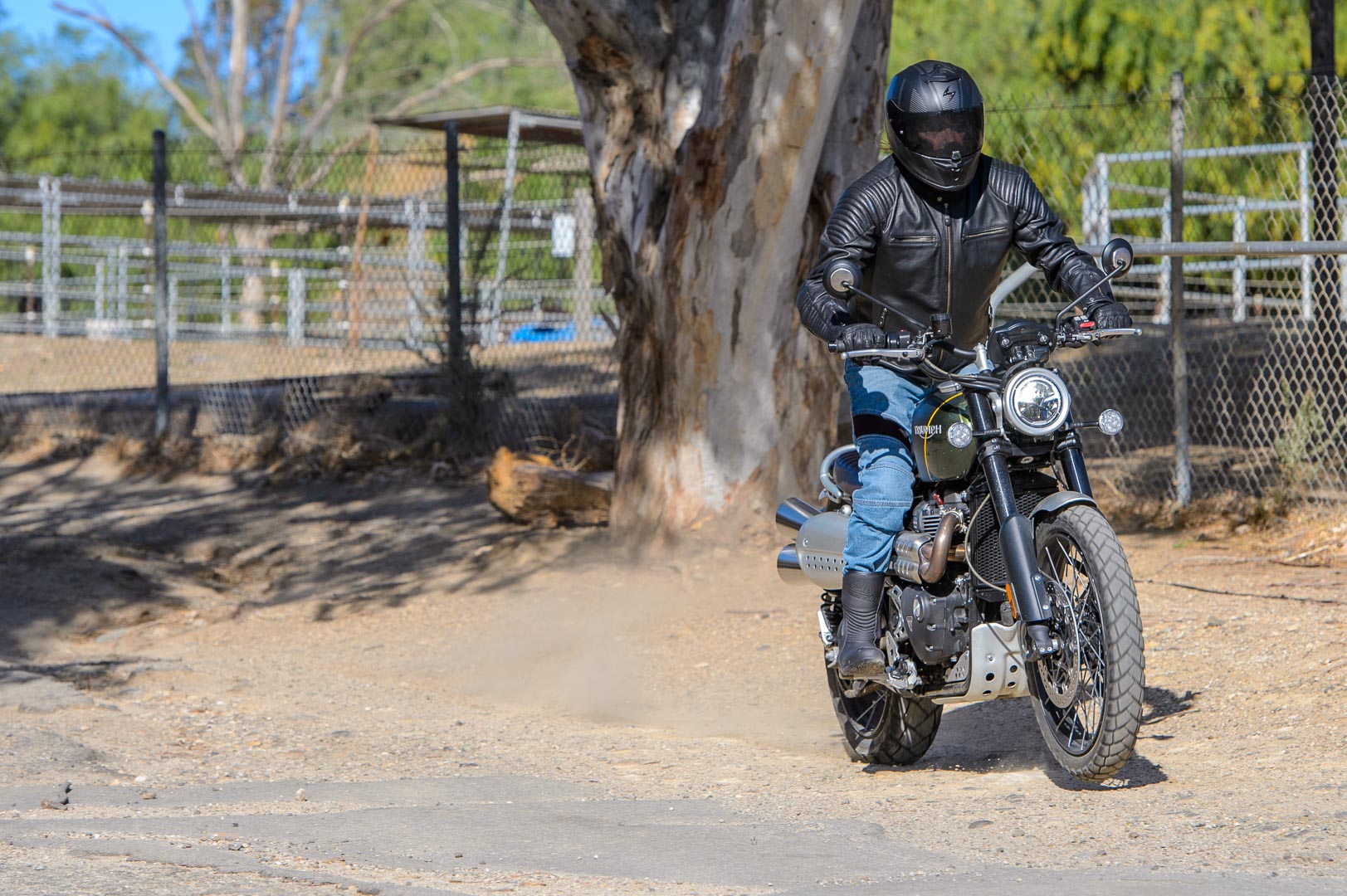