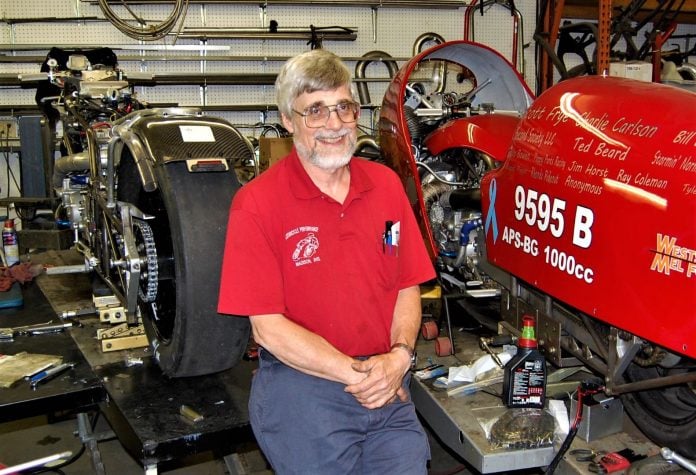 Bill Whisenant, a great competitor on the strip or the salt and an even greater friend, died on May 21, 2020, after a nine-year battle with prostate cancer. Despite that diagnosis, Bill lived his life full throttle—literally.He was the founder and owner of Motorcycle Performance in Madison, Wisc., and a very successful businessman. As good as he was in building that business, which he launched in 1976, it was building, tuning, and competing on machines built for speed that was his passion.In 2017, he and his team from Motorcycle Performance went to the Bonneville Motorcycle Speed Trials and came back with two AMA National Land Speed Records. Nick Moore rode the team’s 750cc A-AF class W3 Ducati to a record speed of 169.426 mph and Bill rode the team’s 1000cc APS-BG class W3 Ducati to a record speed of 177.987 mph. Both of those records still stand.Bill’s shop also boasts the quickest Ducati on the drag strip (7.99 sec. at 178.42 mph, the first to do a sub-eight second run) and the fastest Ducati on the salt in North America with a top speed of 212.959 mph.His brilliance in building speed machines was matched by his generosity in sharing his time, talent and expertise. It was his help and encouragement together with that of our mutual friend and racer, Jim Haraughty, that made my long-held dream of going to the Bonneville Salt Flats and competing in motorcycle land speed racing come true in 2009.That experience set the stage for three more trips to Bonneville and for me to set the AMA National Land Speed Record in the 350cc P/PC class in 2014. Bill and his team helped prepare the 1974 Honda CB350F that set that record, which also still stands.In the course of his treatment, Bill participated in clinical studies that will aid in the development of ever-more effective treatment for others.There will be a gathering at the Motorcycle Performance shop in Madison later in the Fall (once it is safe to do so), to share stories and memories. More details will be posted on www.motorcycleperf.com/ and the shop Facebook page as pandemic recommendations continue to evolve.His subtle sense of humor, his ability to teach, innovate, and share his experience made Bill a friend and respected mentor to a great many people.The staff of Ultimate Motorcycling magazine online sends its condolences to the family of Bill Whisenant.