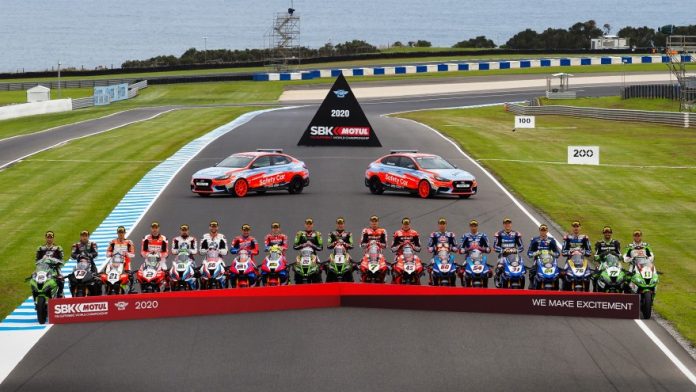 June 19 update: There has been a huge upheaval in the 2020 World Superbike Championship Series. You can skip the story below and go right to the updated schedule. There are rounds scheduled into November, with three rounds—UK, The Netherlands, and Qatar—with dates to be determined.With the 2020 World Superbike Australian Round in the books, the FIM, promoter Dorna WSBK Organization, tracks, and governments are scrambling to assemble the rest of the 2020 FIM Superbike World Championship Schedule in the wake of a world health crisis.The good news is that are still 12 rounds on the schedule, though the Qatar Round does not yet have a date set. The bad news is that the Italian Round at the Imola is canceled.

“There is profound bitterness for the painful decision,” the President of Formula Imola Uberto Selvatico Estense said, “and I say this, not only as President of the company that manages the circuit, but above all as a great motor enthusiast who waits for the Imola round every year with the enthusiasm of a boy. On the other hand, there is the awareness that the right choice has been made to protect the health of the public and professionals as much as possible, a main aspect beyond any economic and/or sports topic. However, as an optimist, I quickly put aside the displeasure to give space to the idea of 2021, that will make it up to us emotionally and objectively for the current sufferings and with Dorna. We are, therefore, already considering the planning of an Italian Superbike Round in 2021, and I also hope for the following three years.”As it stands, the 2020 WSBK Championship Series will restart on the July 4 weekend at Donington Park Circuit in central England. August and October will be busy months, with three races each.Currently, Alex Lowes leads in the 2020 FIM Superbike World Championship Series with 51 points, followed by Scott Redding (39 points) and Toprak Razgatlioglu (34 points).