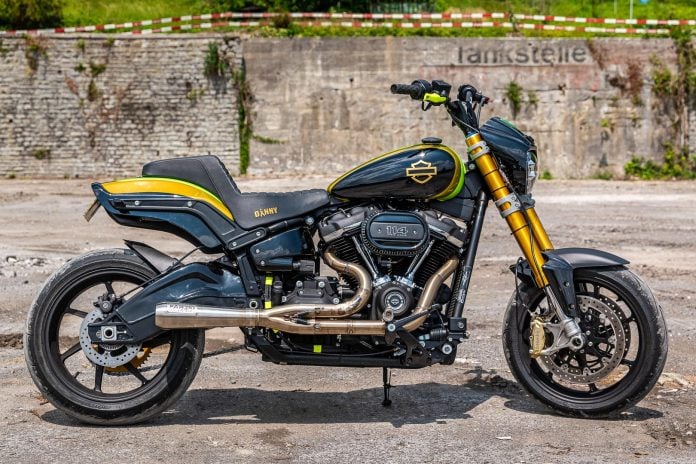 No one can accuse Hardnine Choppers’ Danny Schneider of taking the road most traveled. A Swiss-born pioneer of freestyle motocross in Europe, he had to move to France to build the sport and ply his trade. Suffering career-ending injuries at age 21, Schneider reinvented himself as a hardscrabble builder of custom performance motorcycles with unusual pedigrees.Schneider started up Hardnine Choppers ten years ago, with a lightly customized shovelhead. “When I look back,” Schneider recalls, “it’s not much to do with a custom bike! I put a little gas tank on it, cut the fender, added baby apes, and that was it.” 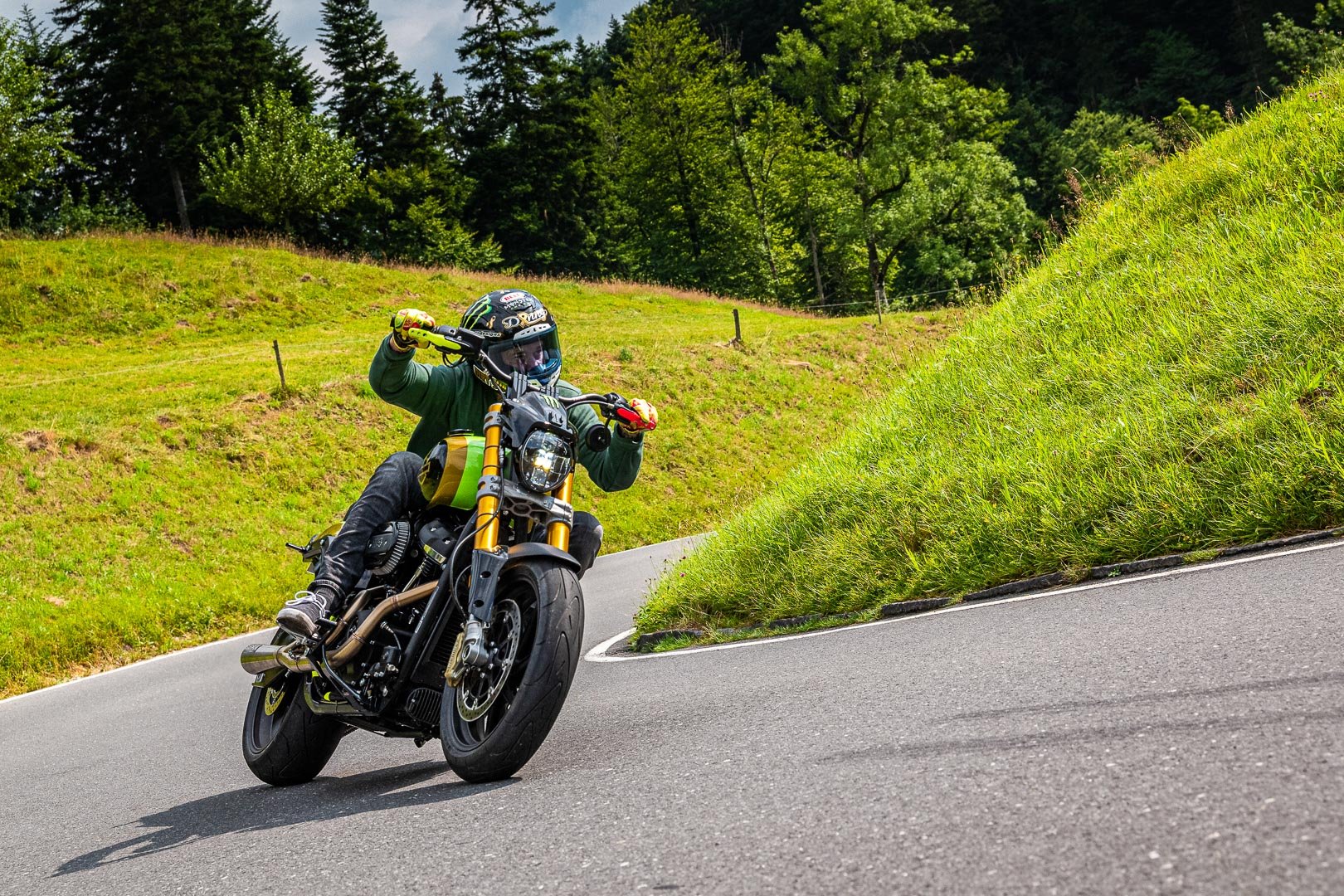 Hardnine Choppers creates unorthodox motorcycle builds that reflect the unlikely origins of Schneider. “I guess my background—BMX, FMX, MX, skate-inspired me ’til now!” he says before changing direction. “Now, only country music inspires me.”His latest creation, the Hardnine Choppers Nuggets, starts with a 2019 Harley-Davidson Fat Bob and turns it into something ready for the twisties.“All of my bikes are street legal; all of them are very rideable. I’m constantly looking for the best set up,” Schneider declares enthusiastically, “because in the Alps there are no rails on the side of the street. If you flip your bike there, you are dead.”Schneider recalls a crash he had during a video shoot saying, “Now I have a 17-month-old daughter, I need it perfect! I take Charlie to my shop every afternoon! I wanna spend as much time as possible with her, and she loves it there! I made her own room with a swing, tent toys, everything.” Reflecting that, Nuggets is named after his daughter, who he nicknamed Nugget after her appearance in an ultrasound image. 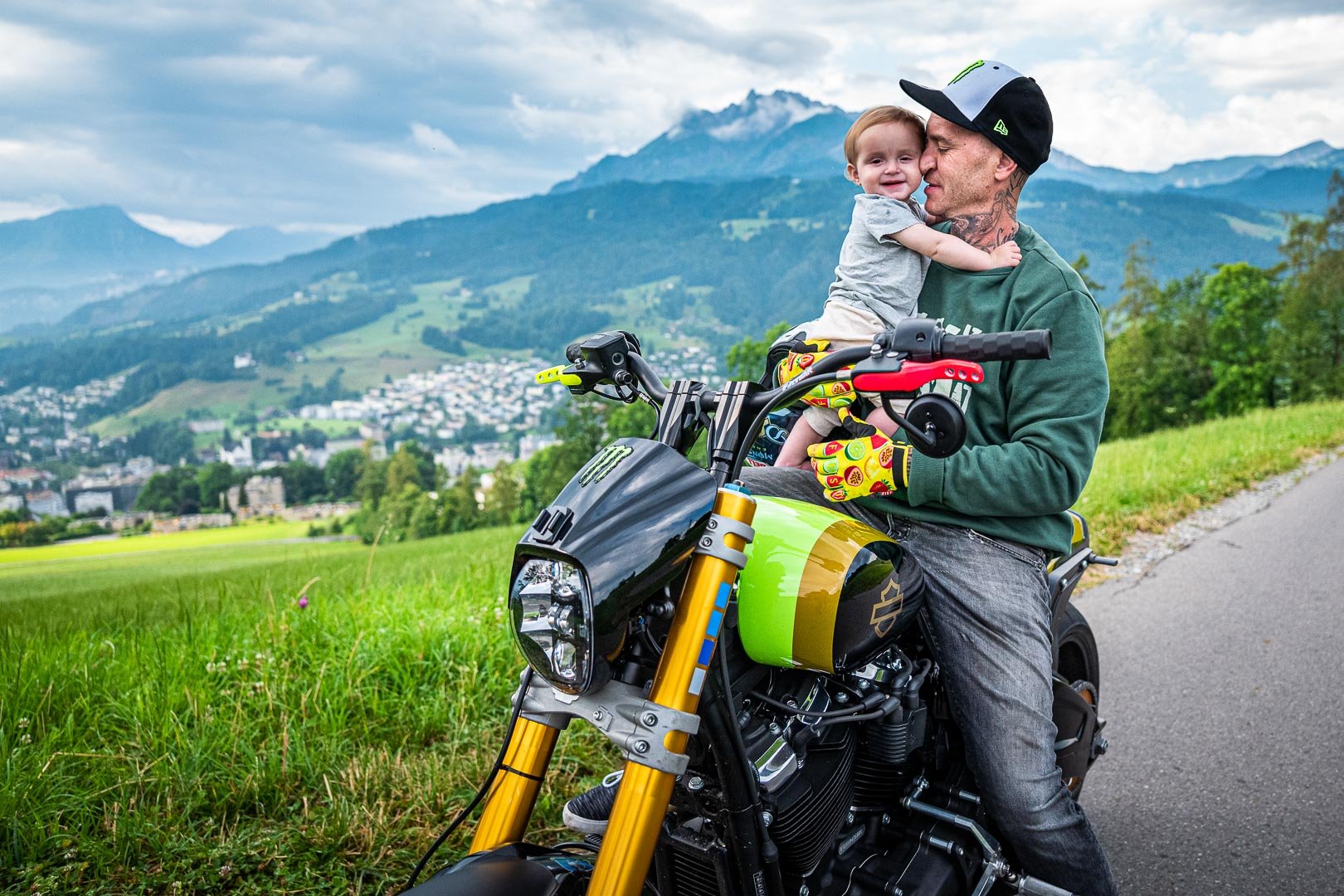 Schneider took the Fab Bob and began grafting on BMW S 1000 RR parts. The wheels are from the RR, but that’s the easy part. That arch swingarm is also from an RR, though it has been shortened by 3.6 inches. Continuing on that arc, Nuggets has Öhlins suspension from an RR, including a semi-active fork.The front brakes are Brembo, with a colorful abbreviated Rebuffini lever (to match the clutch lever) mounted on a Renthal handlebar with a motocross bend. Risers from Kraus motor lift the grips higher for a more upright riding position.Further ergonomic changes come from the decidedly 1970s Saddlemen seat, and a Harley-Davidson Street Rod headlight cowl. Mid-controls from The Speed Merchant enhance the sporting credentials of the Fat Bob, which sits higher for improved cornering clearance. Continental ContiSport Attack tires provide traction. Power and volume from the Milwaukee-Eight 114 are pumped up with a Fab28 Industries exhaust, and a chain final-drive is used.

Like many builders, Schneider relishes every part of the process. “I love all of it,” he says, “even though most of the time, it’s a pain in the ass! Gas tanks and pipes, I love building the most, and the little detail work when almost finished.” One such detail in Nuggets is the moving of the gas cap.Schneider doesn’t go into builds with preconceived notions. “I sit in front of it, thinking what could be done,” he says, “which will change a million times during the build!”All builds have their challenges, and if you look at the custom stitching in the Saddlemen seat, you’ll get a hint of an intrusion in the creation of the Hardnine Choppers Nuggets.“I got the bike last year from Harley,” Schneider explains, “and built it up in two months. Three weeks later, I had to go through a high dose of chemotherapy because of testicular cancer! So, I was not able to ride much.” 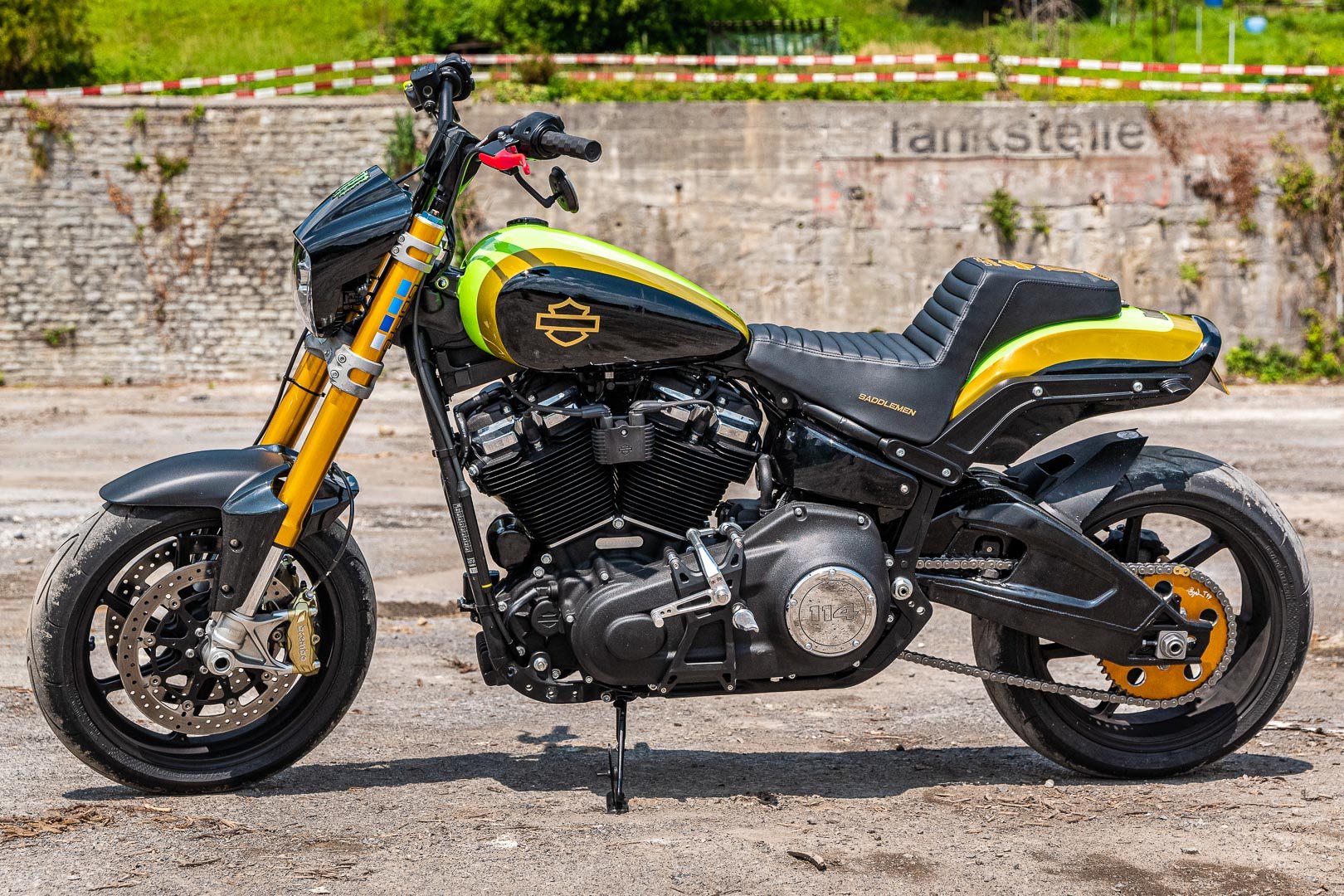 However, that did not stop him. “I have set this bike up like this because of my riding style. The swingarm is so stiff, it’s like to ride a GP bike. Switzerland offers the best streets and Alps passes with tons of turns,” Schneider continues. “I put a bigger rear sprocket on so I’m still able to wheelie the bike, plus I get faster out of turns. This bike is so very different from the FXR I used to ride, but it’s amazing to ride. I still have to dial some suspension details, and can’t wait for spring. Other than that, I’m super happy with it!”Regardless, Schneider continues to look forward. His association with Monster Energy has helped him along. “When I was riding pro FMX 25 years ago, we went to Red Bull asking for support,” he relates. “The owner then told us Red Bull will never sponsor any motorsports! I got to Monster after my FMX career, and now I’m doing more riding projects for them in places where no one else can ride.” 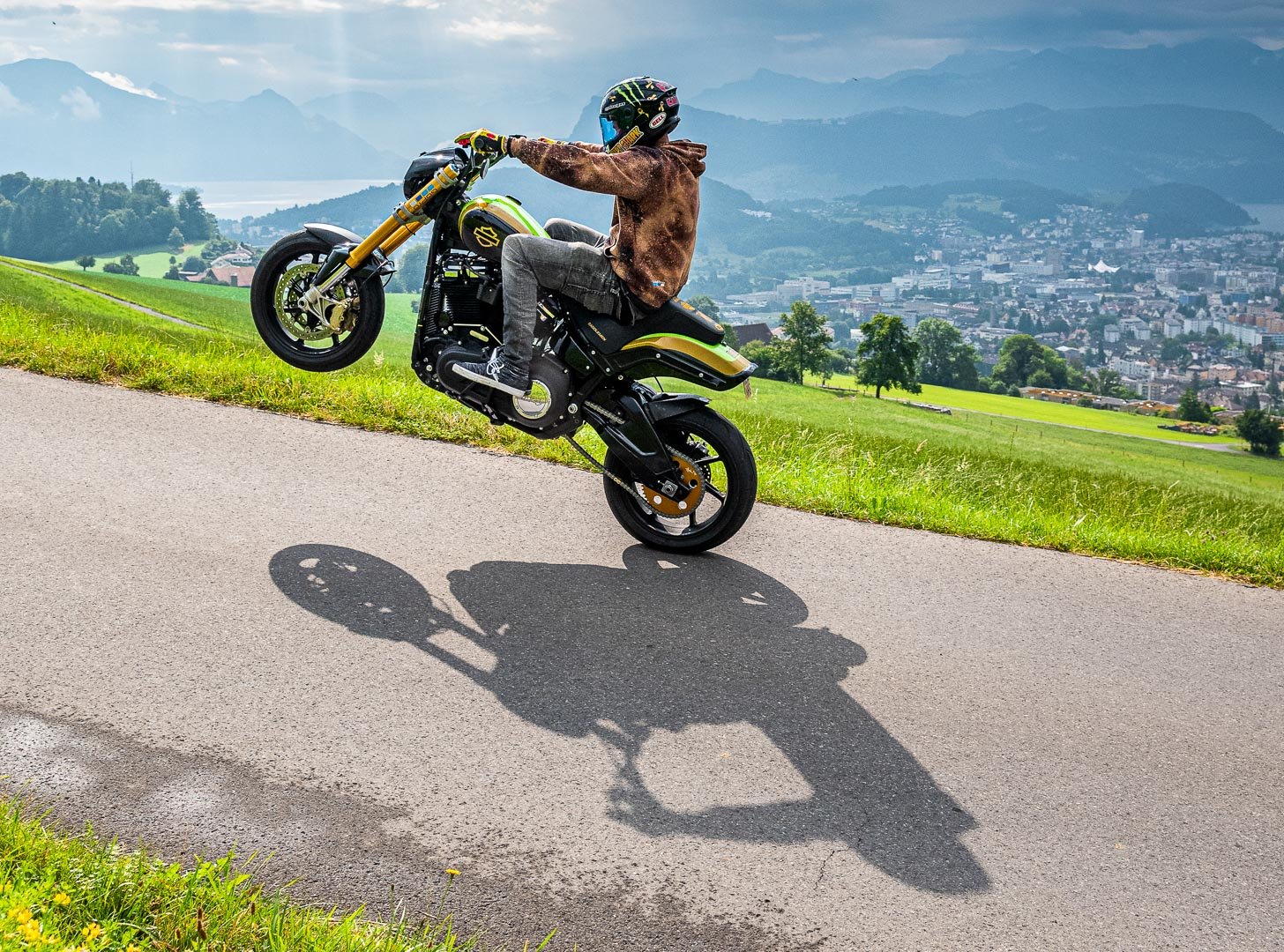 It’s a long way from a 1979 Italjet mini motocrosser to a freestyler inspired by Crusty Demons of The Dirt, and finally to building custom motorcycles at a shop in Bern. Despite debilitating injuries and a bout with cancer, Danny Schneider continues to be inspired by the big and little things in his life, most importantly his Nugget.Photography by Tino Scherer