In hopes of gaining some traction from the popularity of power cruisers such as the Yamaha VMax and Ducati XDiavel, one of Triumph’s least popular models, the Rocket III, is revamped for 2020.

Meet the 2020 Triumph Rocket 3—the Roman numeral ‘III’ is replaced by the Western Arabic numeral ‘3’ to signify significant changes. The new Rocket 3 motorcycles, available in a sporty R and laid-back touring GT models, are both beauty and the beast.

The Triumph Rocket 3’s design features enough power and sporty handling to satisfy the needs of the beast, plus the smooth power delivery and ergonomics that cater to those who prefer gawking at the world’s beauty.

I headed to Tenerife, the largest of Spain’s Canary Islands off the west coast of Africa, to test the all-new 2020 Triumph Rocket 3 R and GT. Here are the fast facts of the “all day, any gear, any ride” motorcycle.

1. The behemoth of an engine—the highest-displacement production motorcycle engine—was overhauled for more power and a much linear torque curve that is felt from the first twist of a throttle. Hold on, because the power is endless and caters equally to both slow- and fast-paced riding styles. The oversquare 2458cc inline-three powerplant is 164cc larger than the outgoing Rocket III.

The Rocket 3 creates 165 peak horsepower at 6000 rpm, up 11 percent over the previous model, and 163 ft/lbs of peak torque at 4000 rpm. This is just the fifth Rocket update since it was launched in 2004, and 2020 marks the first significant upgrade to the engine. The revised powerplant presents zero complaints regardless of riding style.

2. The torque curve is even more impressive than the overall power numbers and makes riding within any situation or any gear fun and straightforward. Torque is already over 150 ft/lbs at 2500 rpm and builds evenly to the 4000-rpm peak of 163 ft/lbs. Torque eventually descends as the engine hits its 7000 rpm redline.

In the quicker switchbacks at Tenerife, I played in second and third, bouncing off the rev limiter. If you prefer, you can short shift the engine into fourth on the same exact tight switchbacks and let the engine’s linear torque do its thing.

3. The big triple is willing to pull down from low rpm—very low. On one highway ride—the only time I needed sixth gear—I allowed the engine to chug down to around 1000 rpm. Picking up the throttle for passes was done with ease, the power respectfully present and the engine not sounding like it was about to choke. Also, this type of gearing should easily allow for more than 150 miles from the five-gallon gas tank on both models.

4. From first to fourth, the six-speed engine is geared just optimally for aggressive riding, while fifth and sixth are very tall to keep the revs low on highway rides. The lever pull on the new assist (but not slip) clutch required only two fingers, and the lever featured super simple adjustability with a twist of a knob. Buyers can also add the Triumph Shift Assist ($320 option) for clutchless up/downshifts.

Our test bikes were not updated with the shift assist, but that would undoubtedly be worth the extra coin. The transmission gets the power to the ground through a zero-maintenance shaft drive that is integrated inside the beautiful single-sided swingarm. Forget about rolling back on steep hills; hill assist is standard. 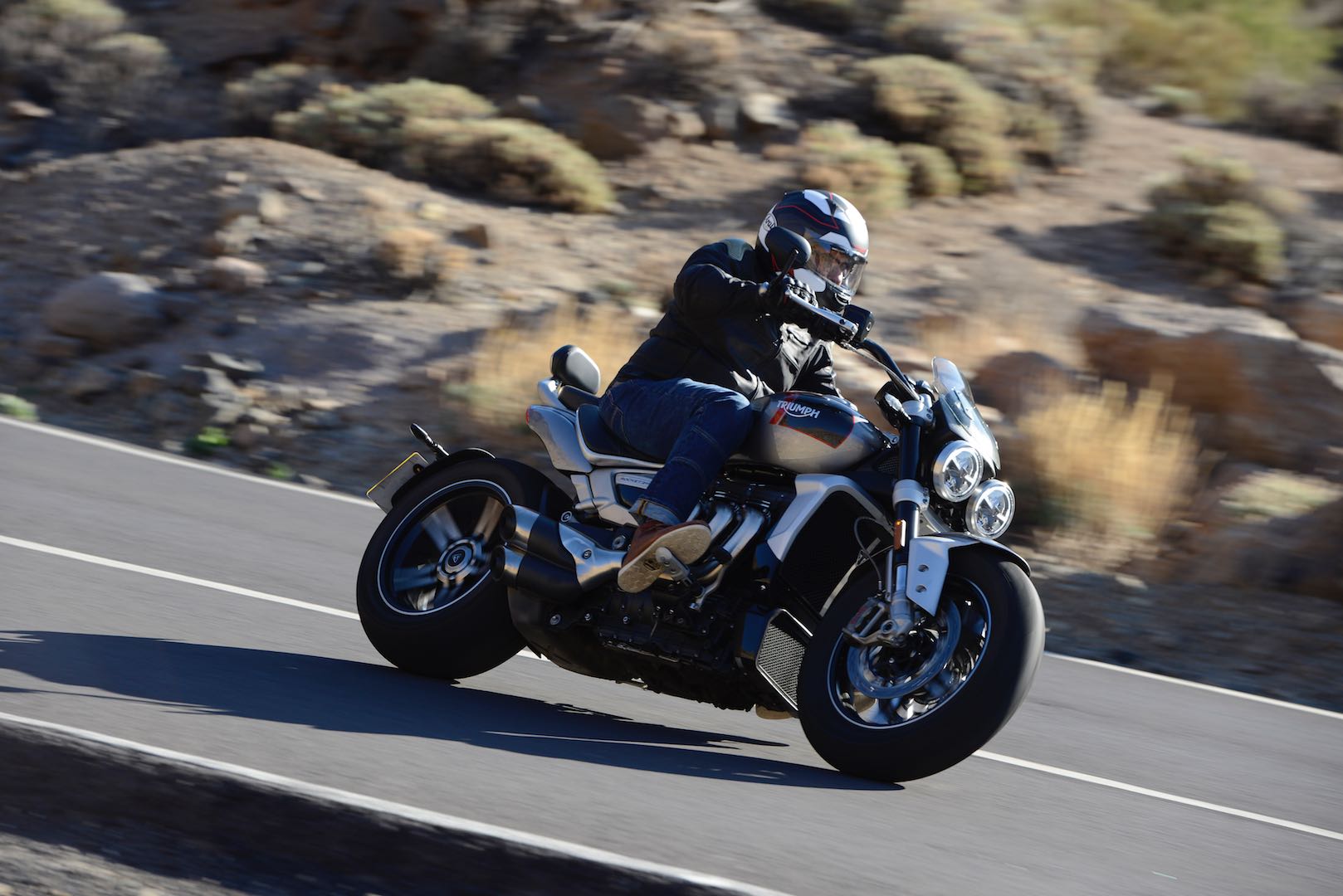 5. The 2020 Triumph Rocket 3’s ergonomics provided zero comfort issues for my nearly six-foot body. Yes, the laidback handlebars on the GT are a bit more comfortable. My ideal ride would take the GT’s handlebar and larger windscreen and transplant them on the Rocket 3 R. The mid-mount R’s pegs have two positions—standard and dropped down a bit over a half-inch.

The forward-mounted GT pegs allow horizontal adjustment—a standard position, and backward or forward an inch. All tools for adjustment are included under a cover below the right side of the rider’s seat. Regardless, I rode roughly an equal amount of time on both bikes throughout a nearly seven-hour journey across Tenerife’s back roads and highways, and I didn’t have one complaint of discomfort. The seat is only 29.5 inches off the ground, which will not provide height issues for most riders.

6. The thick stature and weight of the Rocket 3—around 700 pounds wet—may seem intimidating, but this cruiser feels much smaller. The small-cruiser feel can be credited to the new chassis specs and engine. The Rocket 3 is claimed to be 88 pounds lighter than the old Rocket III.

7. The outgoing Triumph Rocket III handled like a well-fed hog, whereas the 2020 Rocket 3 feels like a precision-loving superstar. This sharp agility and handling at any speed, even parking lot U-turn speeds, is directly attributed to the new lighter aluminum frame and aluminum shaft drive. Overall the bike sees an 88-pound reduction compared to the previous generation. Like the increase in power, the weight savings are immediately noticed. 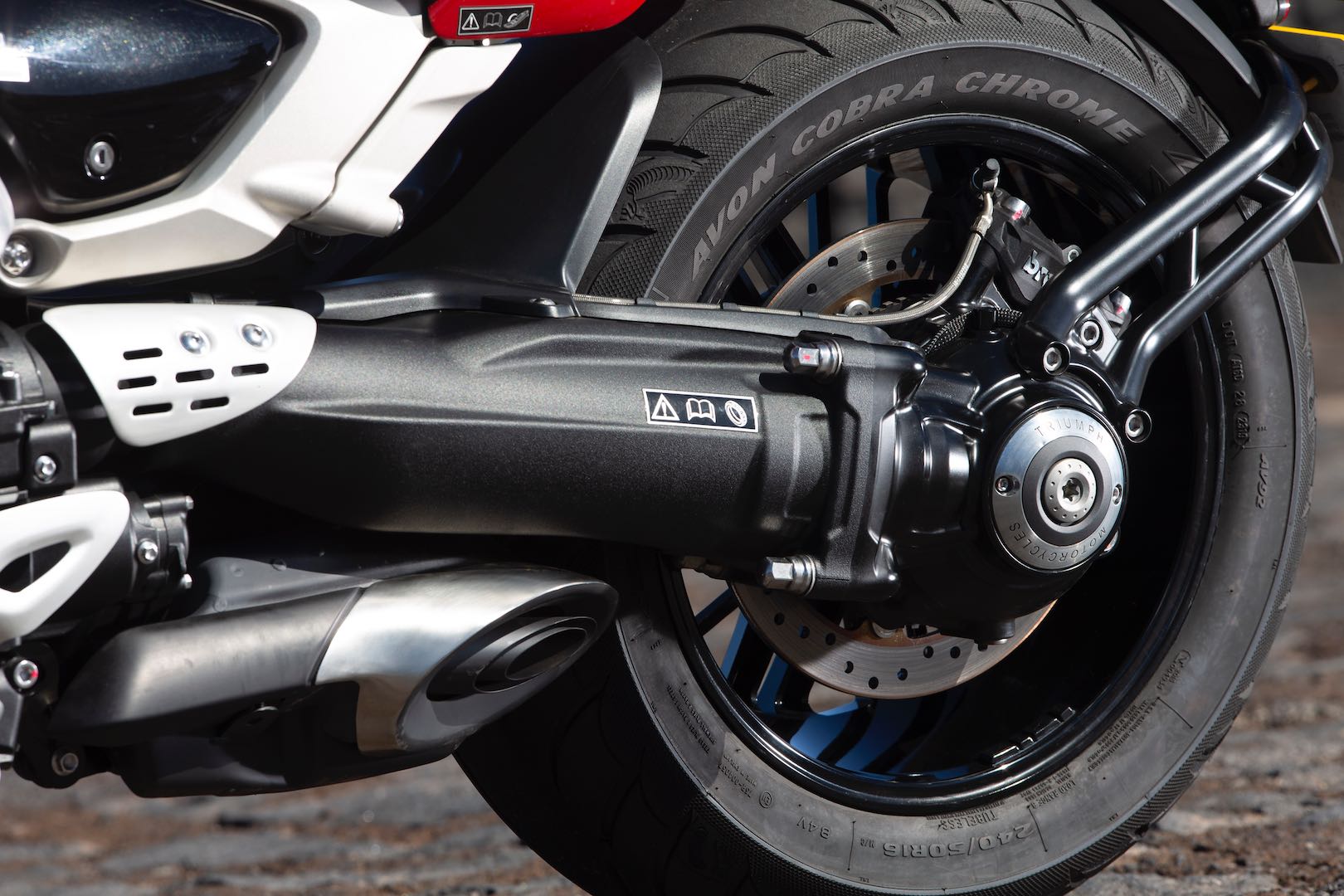 8. The motorcycle’s chassis is complemented by Showa suspension components that help the bike remain stable in the corners while not sending painful jolts to my body. The 47mm inverted fork allowed me to read any nuances in Tenerife’s pavement, and recovered exceptionally well after hard braking or abrupt throttle movements.

I purposely upset the chassis in a few bumpier corners, and the chassis/suspension combo allowed me to get back on line easily. The suspension was a bit soft for my liking, though a bit of playing with the fork damping (no spring-preload adjustability) and fully adjustable piggyback reservoir shock can solve that. The newfound agility can also be attributed to the 28-degree rake, versus 32 degrees on the previous-gen Rocket.

9. While challenging the chassis when hard on the brakes and throttle, I also tested the new electronics. The cornering ABS and cornering traction control, both possible due to a new five-axis IMU, provided pure confidence.

I also experienced with some 100+ mph emergency stops with both brakes and each one separately. The Rocket 3’s chassis remained stable as it arrived at a full stop, so I felt in complete control.

10 The 2020 Triumph Rocket 3 models offer four riding modes—Road, Rain, Sport, and Custom—which are easily changed on the fly. After a few stops and experimenting to figure out the combination of buttons needed to get the setting page on the dash, the setup proved itself intuitive. TC and ABS can be disengaged while stopped.

By day’s end, I had created my own customized map that lacked TC and ABS, allowing for some wheelie attempts and burnouts. Come on, this is a power cruiser!

11. Even though the stock Avon Chrome tire sizes are a unique combination of 150/80 x 17 and 240/50 x 16, you need to scrape a few millimeters off the short handling pegs before reaching the edge of the tire. Triumph engineers say another two degrees of lean angle remain after the feelers are worn out. 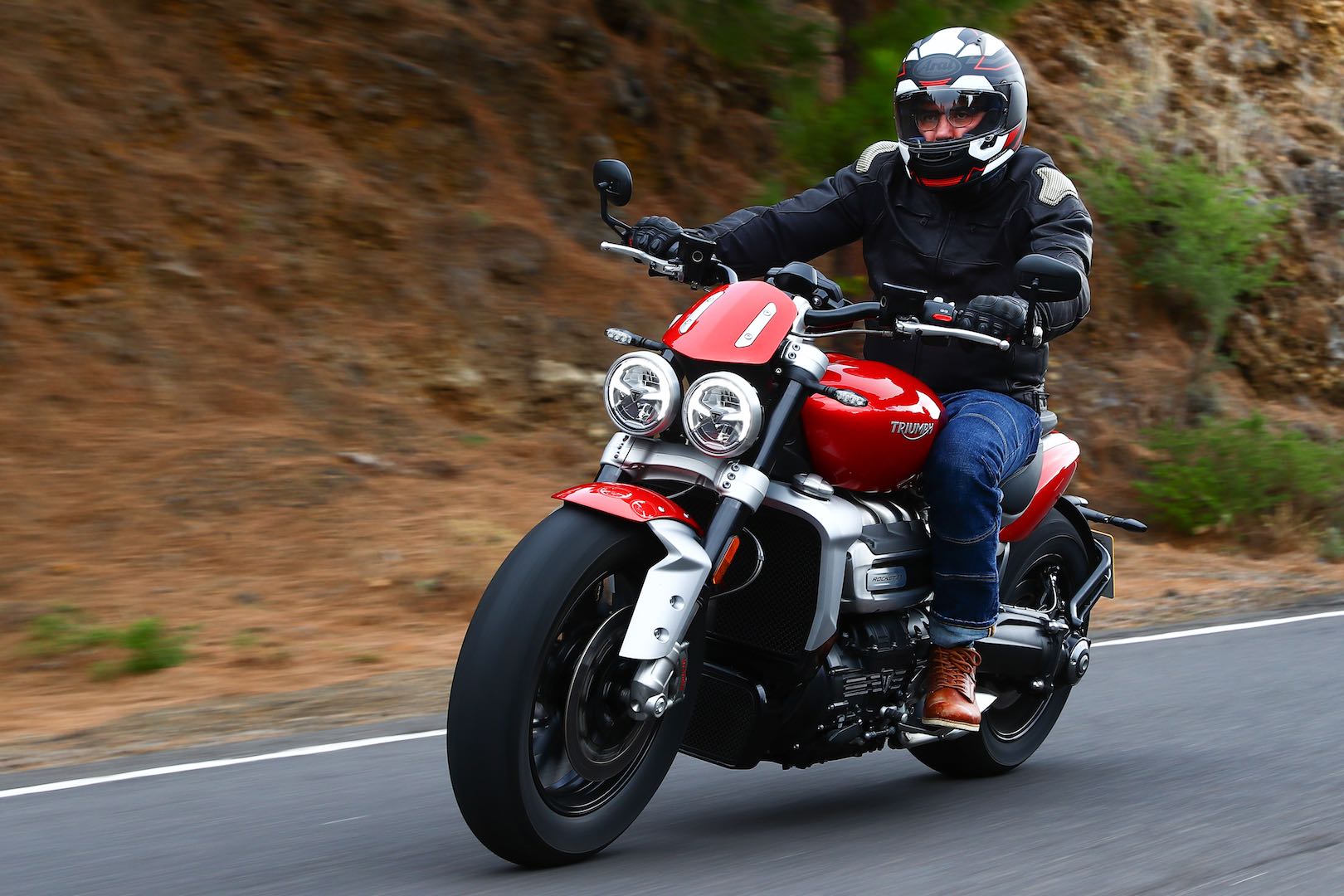 12. Triumph wisely choose Brembo Stylema brakes for the Rocket 3, and they work as Brembos should. I only used one finger for most of the ride without any issue. The rear brake did fade a bit after riding through a long series of aggressive corners while keeping the chassis balanced and purposely trying to upset the chassis with aggressive mid-corner braking.

For everyday riding, though, the brakes should present zero issues. The setup is typical of many of the world’s leading sportbikes—320mm discs up front squeezed by four-piston monoblock calipers, plus a massive 300mm disc out back squeezed by a four-piston caliper.

13. Cruise control and keyless ignition create a much more convenient ride. The cruise control is simple to use from the left switchgear. As for the keyless ignition, the fob is bulky, like many offered for the automobiles of today. These should hopefully get smaller in time!

14. The TFT full-color gauge layout is also clean, easy to see in bright sunlight, and simple to navigate via a left toggle on the controls. You can customize the display screen, and Triumph wisely placed the gauge on a pivoted bracket so you can quickly adjust the screen up or down to eliminate reflection from the sun.

15. The styling is super appealing to me; the motorcycle’s lines flow like it’s in constant movement. My favorite styling elements include the GT’s black/machined 20-spoke rims (R’s are all black), the single-sided swingarm, the belt along the top of the gas tank, the clean rear license-plate holder attached to the swingarm, and the gorgeous twin LED headlights.

I admired seeing other Rocket 3s in the mirrors—the LED headlight’s T logo bright and pronounced, but not enough to distract. As for colors, the red talks more than silver or black. 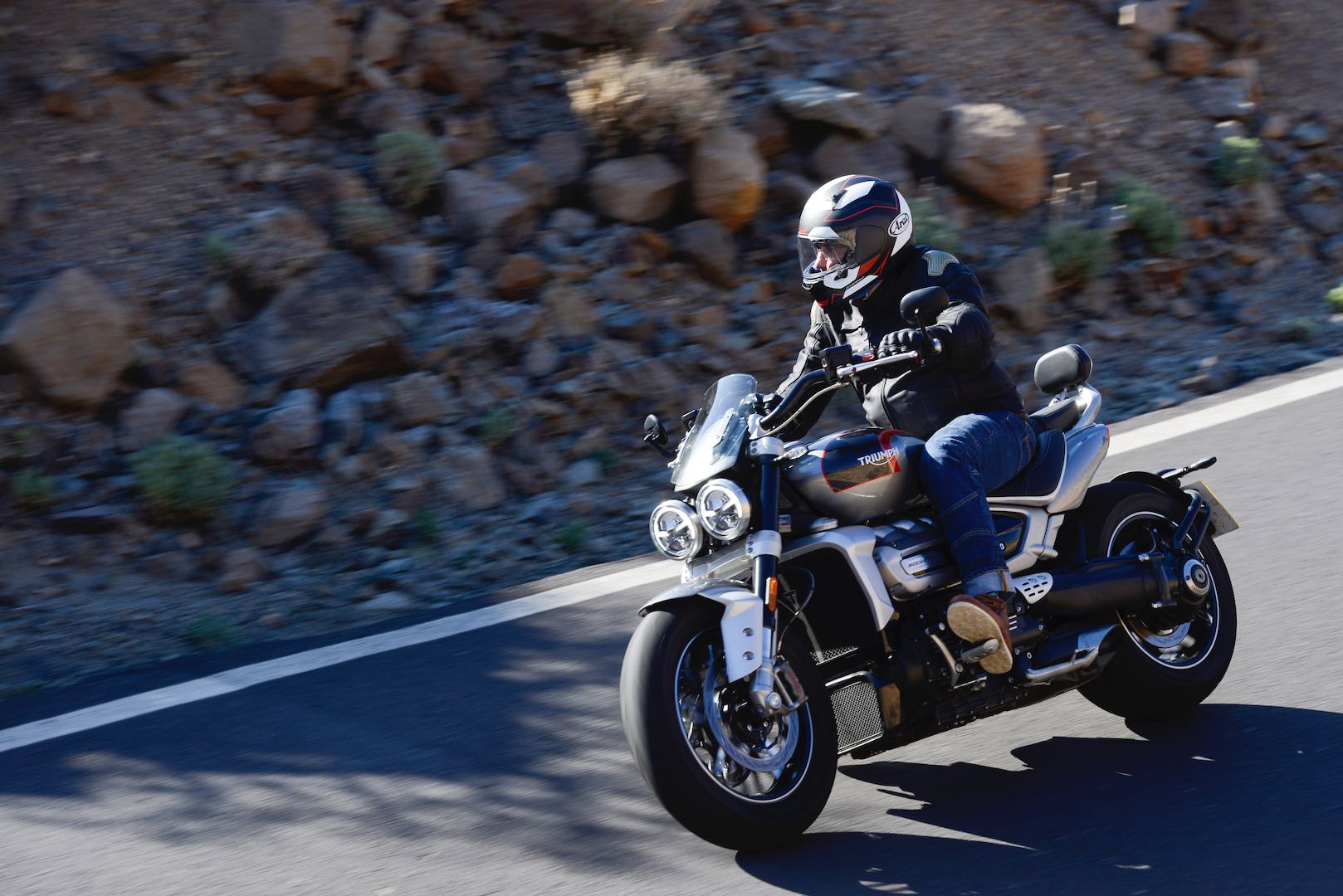 16. Two more styling attributes need their own mentions due to their factory sexiness—the internal handlebar wiring and discreet passenger footpegs. To hide the latter, you simply fold the rubber-covered peg into the bracket and the bracket into the tailpiece. The design is simple and super clean, providing one of those “why didn’t this exist years ago” thoughts.

17. Triumph wisely choose the proven technological infrastructures of GoPro and Google, instead of developing their own. Technology-forward accessories include two that are so far exclusive to Triumph—an integrated GoPro control system that allows you to control the camera from the handlebar while displaying all information on the dash and Google-powered navigation. Also available as a handy $260 accessory is a tire pressure monitoring system.

18. The engine alone couldn’t satisfy the speed brain, though, and Triumph’s Chief Engineer Stuart Wood understood this. That’s precisely why he paired the new engine with a lighter aluminum chassis and Showa suspension that allows a rider to harness and control all that linear torque seriously. As for the styling, with many attributes to that single-sided swingarm, the beauty matches the beast of a powerplant.

19. The previous generations of the Rocket III did not work for me, but the Rocket 3 does. The old IIIs appeared as experiments in style with some bragging rights as building the largest capacity motorcycle engine. Various variations were released—the Classic, Roadster, and Touring models—while the chassis and engine remained relatively the same.

The 2020 Triumph Rocket 3 has changed this history drastically with optimal amounts of torque across the rev range that is usable for the everyday ride or tourer and handling to match. With an extra bit of right-throttle twist, this torque also helps fuel a brain mad with speed. Many sporting riders would have never considered the Triumph’s portly Rocket III of yesterday, but the 2020 Triumph Rocket 3 is a power cruiser that will entice new riders to the genre. 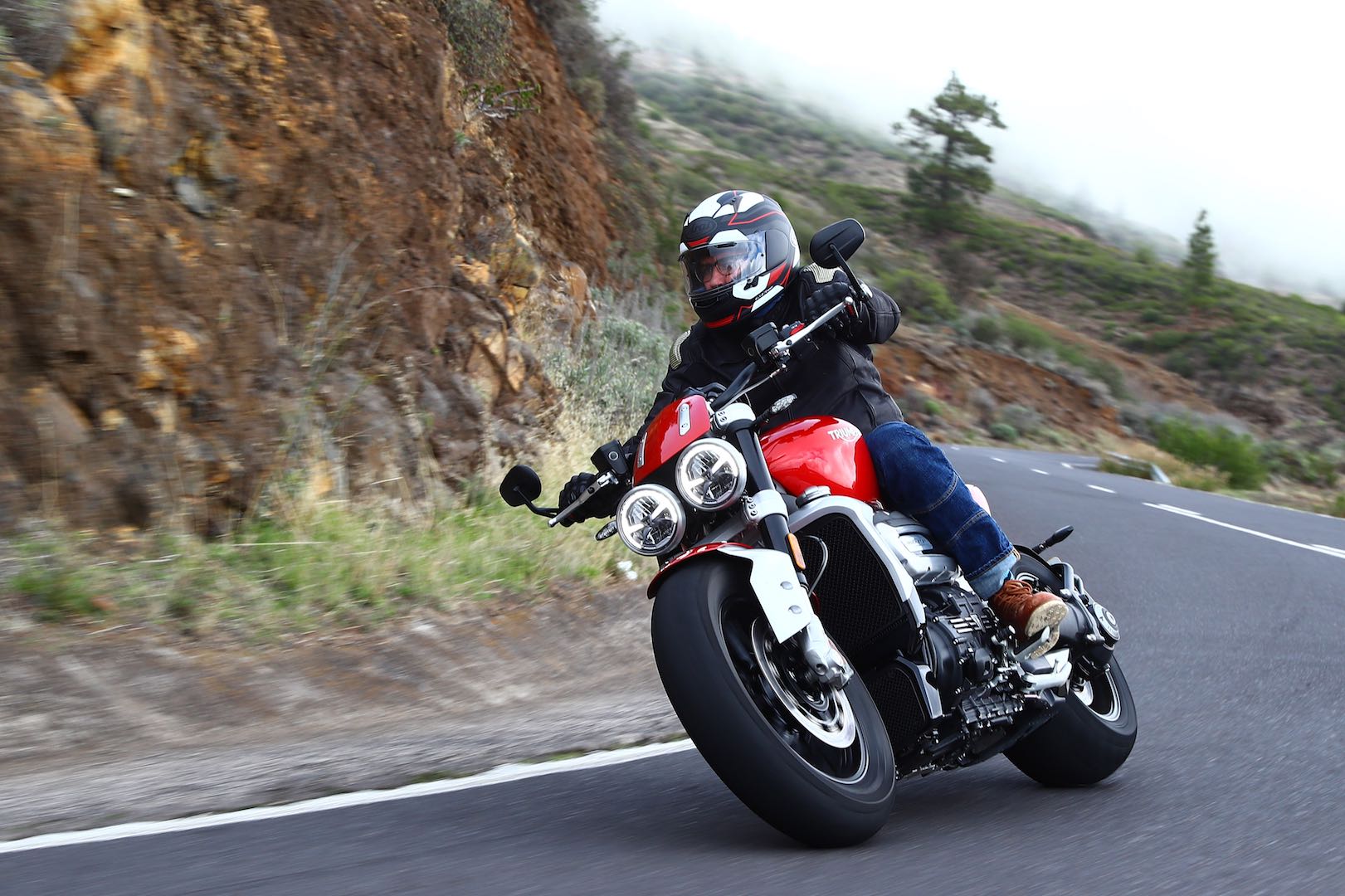 Get the Gear You See Here at MotoSport.com!