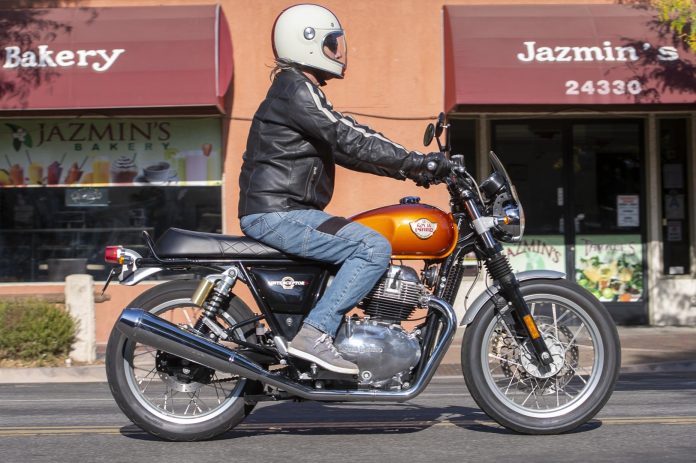 Everything old is new again, so that should make me a very desirable model—ha! Yes, I’m about as old as the original Royal Enfield Interceptor that has been reimagined by the Indian company as the INT650 (Honda likely had something to say about the use of the name Interceptor).Nostalgia reigns as we look back to simpler times. Selective memory has us yearning for carefree days of seemingly endless summer sunshine—or that’s the impression one gets watching the promo video for the 2019 Royal Enfield INT650.While the Royal Enfield INT650 undoubtedly makes for a desirable lifestyle accessory for adventurous millennials, there’s more to the motorcycle than that. With a base MSRP of $5799—identical to the Suzuki Boulevard S40 (a 652cc single)—the INT650 is going to attract the attention of would-be commuters. We decided to find out how well the INT650 works in the demanding commuting environment of Los Angles, rather than rest on its style laurels. 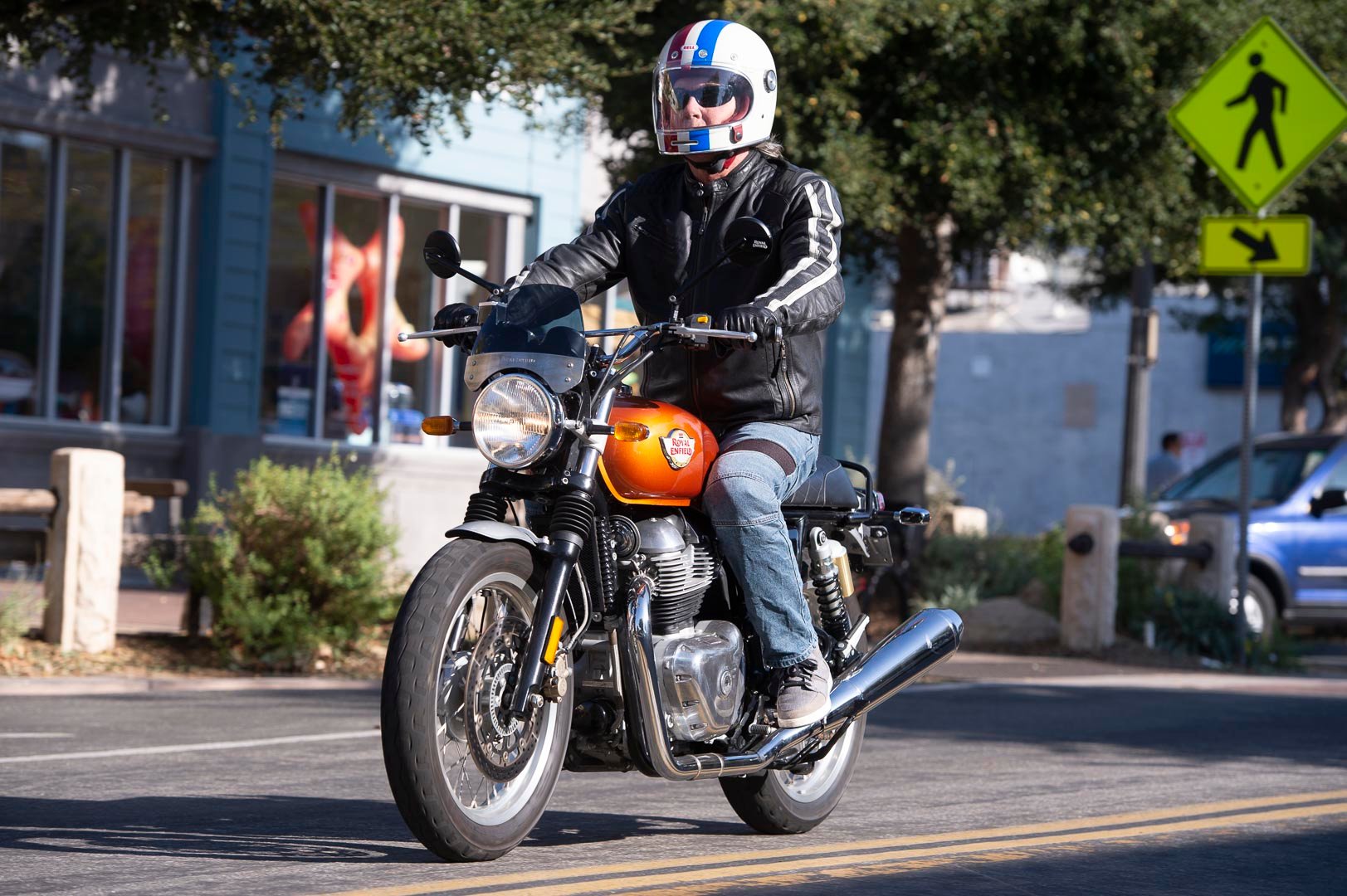 Having said that, the INT650 gets full style points. It’s hard not to feel cool when riding down the boulevard on a motorcycle that looks so authentically old school that passersby will ask you what year it is. Don’t buy this motorcycle unless you’re willing to answer questions about it. The wire-spoked wheels, twin shocks, bench seat, and wide handlebars capture the classic look, with fuel injection, disc brakes, ABS, and a slipper clutch providing the reliability and safety we appreciate.Happily, you don’t have to suffer an awkward body position on your way to a cramped cubical to get those approving covetous looks. The INT650 is supremely comfortable. The diamond-quilted bench seat is nicely padded, helping absorb the irregularities of neglected urban pavement. The upright seating is natural, creating a good vantage point for seeing what’s going on around you. It is the best position to be in for maneuvering through traffic.While the neutral riding triangle is perfect for riding, I found the footpegs to be in an awkward position for touching down to the ground. I had to consciously remember to put my feet forward from what feels natural when coming to a stop to avoid bumping my calves into the pegs.I expect taller riders won’t find this quite as much of a hindrance. I had to aim to have my legs straight down to take advantage of every fraction of my 30.5-inch inseam. Happily, the INT650’s 31.6-inch seat height is not unusually tall, so I am just able to flat-foot it at stops. 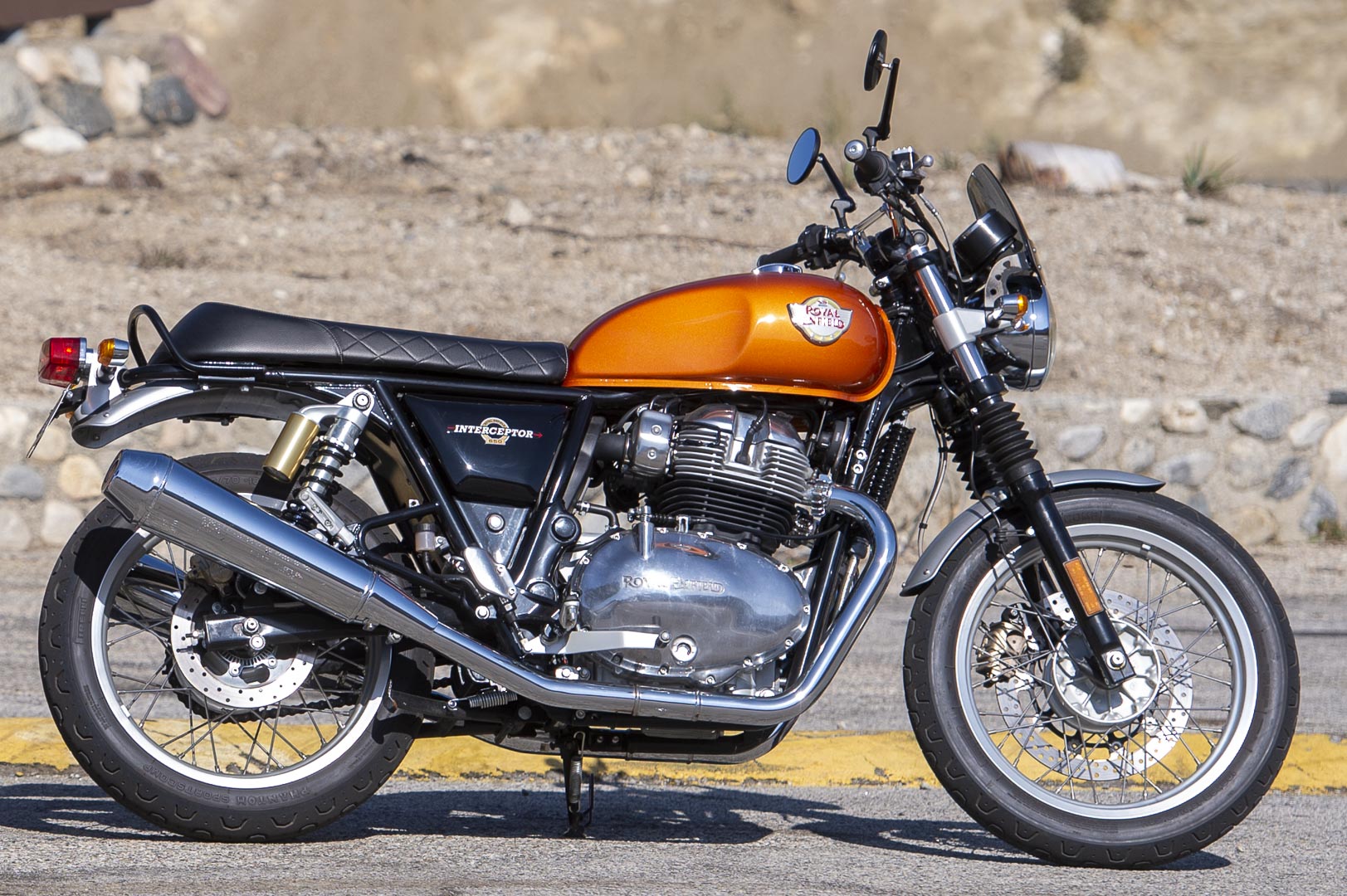 You won’t want to be in a hurry when commuting on the 2019 Royal Enfield INT650. While the motor has gobs of torque and pulls with authority from low speed all the way through its six gears, the parallel-twin does not do so quickly. You won’t be drag racing anyone from a red light, and why would you? The INT650 doesn’t have to prove anything to anyone.The transmission works smoothly, and shifting is precise. That means you can pay more attention to the traffic around you. I didn’t have to do a lot of shifting on the INT650. There’s so much useful torque and engine compression braking that rolling on or off throttle takes care of most speed adjustments. It’s genuinely a motorcycle that embraces cruising through town without being a cruiser. Clutch pull is about average—not stiff like an authentic vintage motorcycle. The clutch lever is not adjustable, and the reach was a bit long for my not-so-petite size L women’s hands.As one who is usually running late for work, I found myself more often than not just chilling and remembering to take in the world around me along the well-worn path I beat to work every day. So, yes, I was often tardy on the days I rode the INT650. I don’t really care, though, because the whole vibe of the bike is a more relaxed ride. It improved my mood every day before walking through the front door of work.Of course, the Royal Enfield INT650 can be hustled when you just must. It doesn’t feel completely planted on the freeway. The Pirelli Phantom Sportscomp tires on 18-inch wheels do not play well with rain grooves, a skill that is essential to confident freeway commuting. The INT650’s motor is happy to take you up into the 90s, but the tires don’t encourage such license-risking. The accessory flyscreen takes the edge off of the windblast, but I’m more happy to be able to get a comforting grip around the seat and tank with my knees.The INT650 is easy-handling despite its 467-pound curb weight and, at anything beyond parking lot speeds, it is reasonably nimble. This makes skirting through lanes of traffic an option, though again, the soul of the INT harkens back to a time where we weren’t all in an overbooked hurry. Just because you can move to the front of the lanes of traffic at a stop doesn’t mean you will on the INT650. 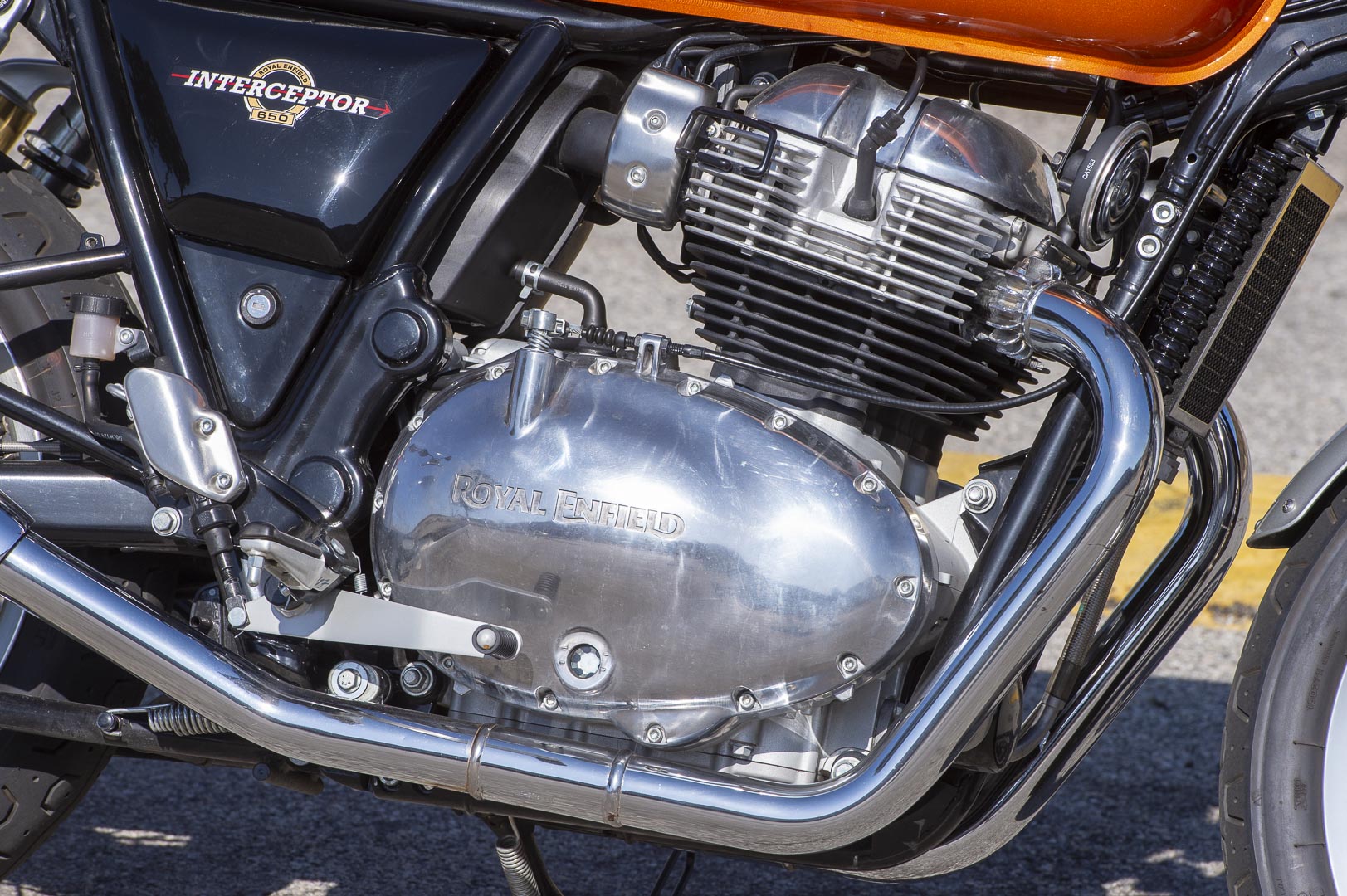 There is just a single 320mm disc up front to slow the INT down. A firm squeeze on the non-adjustable brake lever will slow the bike, but there is not good feel at the lever. Compared to most front brakes, it feels inadequate—this is a category where the 2019 Royal Enfield INT650 feels vintage more than modern. I found myself down-shifting as well to take advantage of the compression braking.The rear 240mm disc has good feel and appropriate power, and Bosch ABS lends extra security without being intrusive. I finished testing the INT650 thinking I’d like to try it with different brake pads as a quick fix, as I expect more from the Bybre calipers and a 320mm disc.Interestingly, I didn’t feel the same unease when riding the tight and twisting Mulholland Drive—an excellent commuting route if you can get it. When the speeds were slower, I had more confidence in the INT. The fairly aggressive 24-degree rake and leverage from the wide handlebars allow me to adjust my line when needed. There’s enough cornering clearance that the peg feelers aren’t getting worn.The mostly non-adjustable suspension on the INT650 is reasonably matched to the expected use of the bike. The harder you ride it, the more you will feel the limits of the budget suspension. I found it to be fine around-town, which feels like the INT650’s niche. 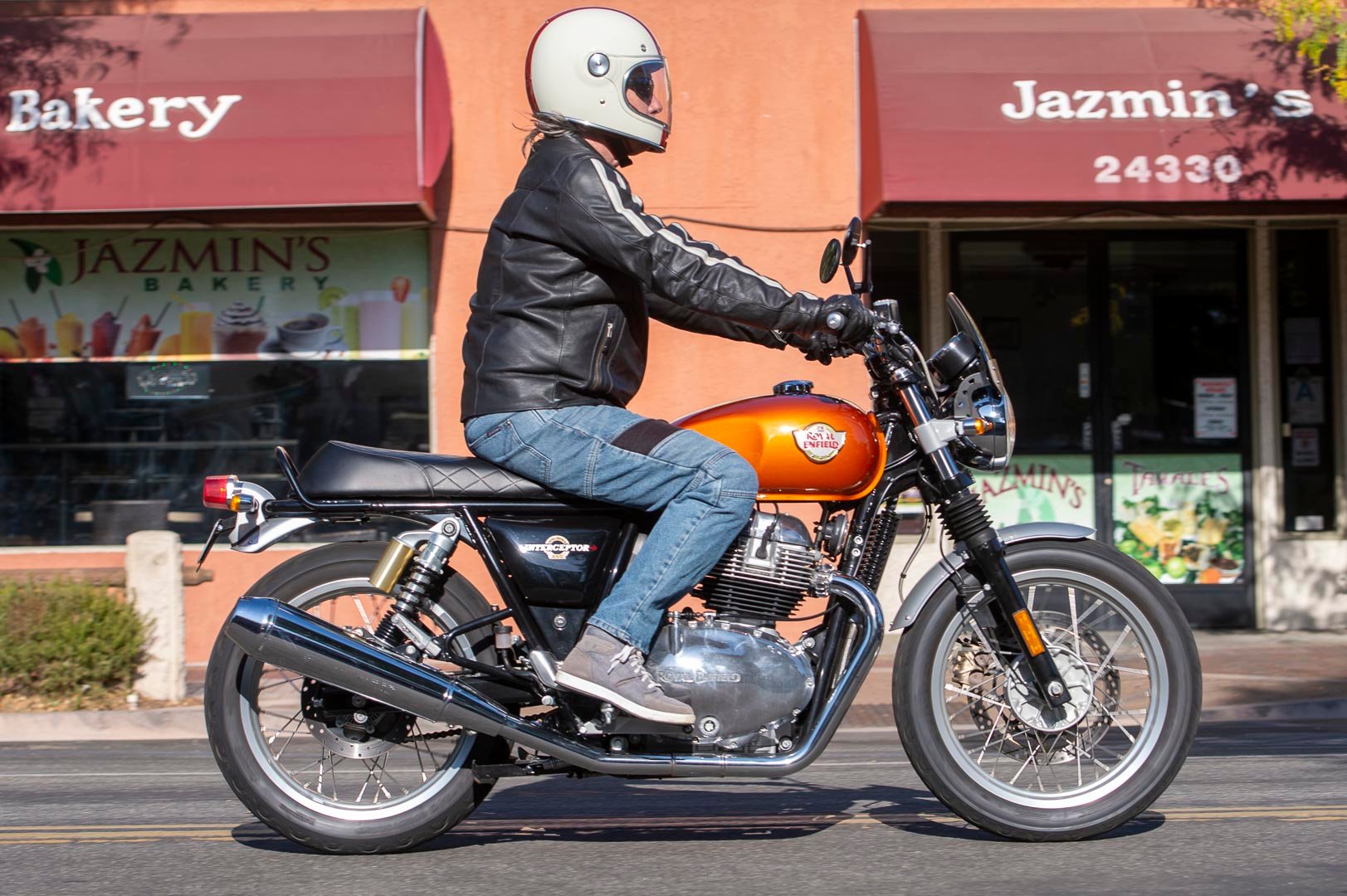 An elephant in the Royal Enfield’s room is reliability. As much as I’d like to tell you it was perfect, the INT650’s bottom end sprung an oil leak during the test. Smoke wafted off the mid-pipe before the rear wheel was sprinkled with hot oil. This required an ignominious trip to the Royal Enfield dealer in the back of a pickup truck. We hope that’s atypical. Still, it is a concern for a brand that hasn’t established a reputation for rock-solid reliability.The Royal Enfield INT650 taps into an appealing narrative—one of a relaxed, self-assured individual with nothing to worry about, with time on his side to enjoy riding with friends. It’s not about speed, noise, or badassery; its undeniable coolness just is. With a completely capable engine, appealing aesthetics, and a sub-$6K price tag—unless you want the Glitter And Dust colorway—the 2019 Royal Enfield INT650 650 is a tempting purchase.Photography by Kelly CallanRIDING STYLEGet the Gear You See Here at MotoSport.com!