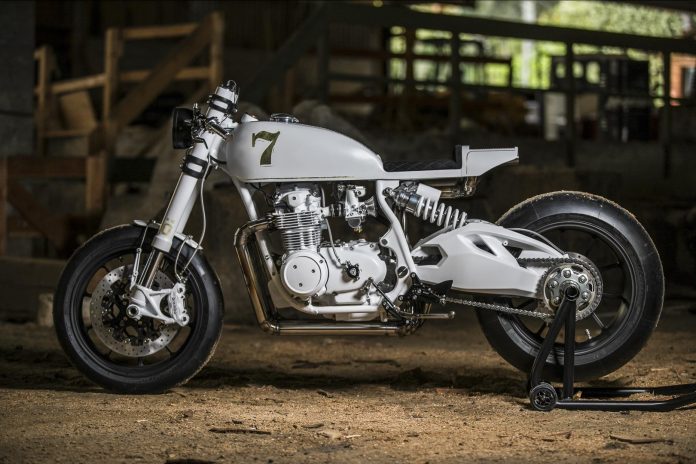 When tackling a custom build, there are a wide variety of approaches available to the craftsman. From extravagant to austere, there is no right way to create art. In the case of the Duke Motorcycles Honda CB500 Four Café Racer, Frenchman Lionel Duke chose to keep it clean, building a chassis around a classic 1970s inline-4 powerplant. 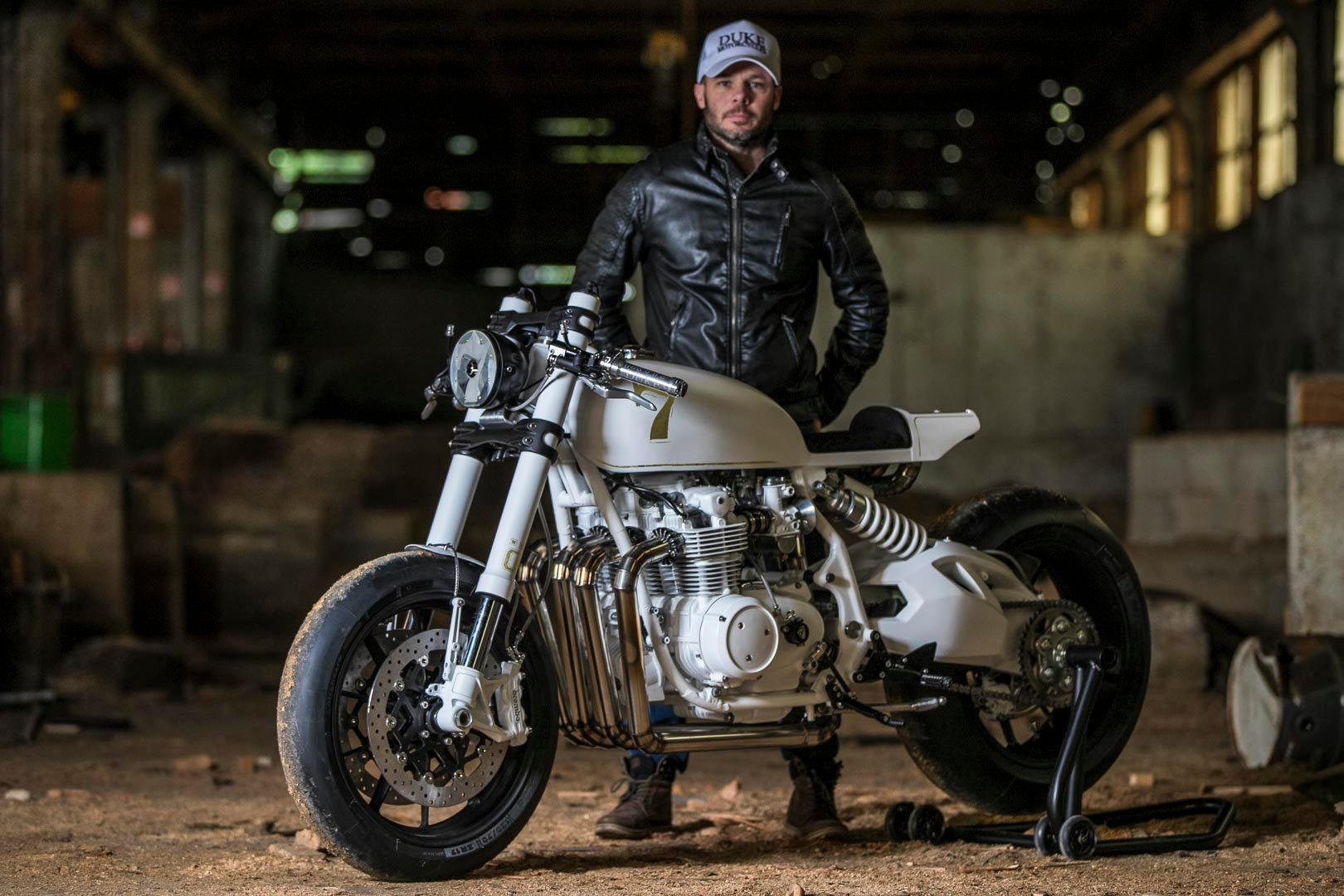 Although the powerplant is easily recognizable as an air-cooled four-cylinder Honda, most people would expect the more iconic CB400 or CB750 Fours in a café racer. Instead, Duke went with the less-heralded middle child. That, of course, is hardly the point of the build, and the motor was kept relatively stock. Instead, the Duke Motorcycles Honda CB500 Four Café Racer is all about minimalism and a striking chassis.To give the build undisputed café racer credibility, the Duke CB500 gets thoroughly modern suspension. Despite being painted white, that is an inverted Öhlins fork, a Ducati Panigale single-sided swingarm, and an Öhlins piggyback-reservoir shock. Matching the suspension is high-performance Brembo braking, while Bonamici Racing provided footrests from Central Italy. Retromod, indeed. 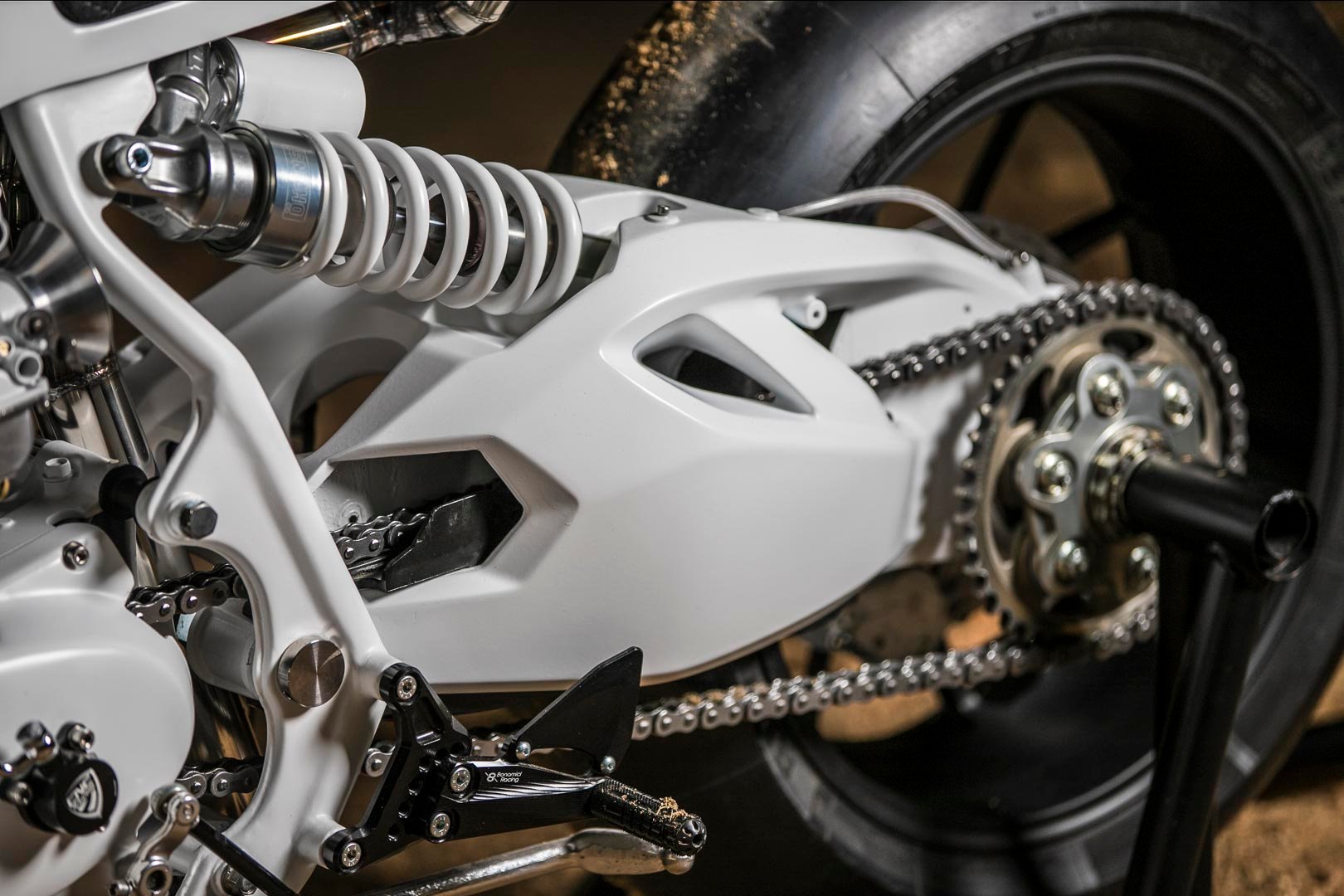 Above the chassis is an aluminum tank/seat/tail unit. “It was realized by hand,” Duke says. “I wanted to keep the proportion of the tank and form of the original so that one recognizes the CB500.” The tank also houses a retro-modern Motogadget MST Speedster analog/digital speedometer.The tank is adorned with a #7, as is the headlight and the aluminum front fender. “I engraved the front with a 7 to recall the decoration of the tank,” Duke explains, “the 7 being the symbolic figure that represents the purity. It seemed to me that was connected to the bike.”Furthering the purity theme, the motorcycle is overwhelmingly white. “The color white, pure white, it’s something that I wanted to do for a long time,” Duke reveals, “a completely white motorcycle with decoration that I made in 18-carat gold leaf.” 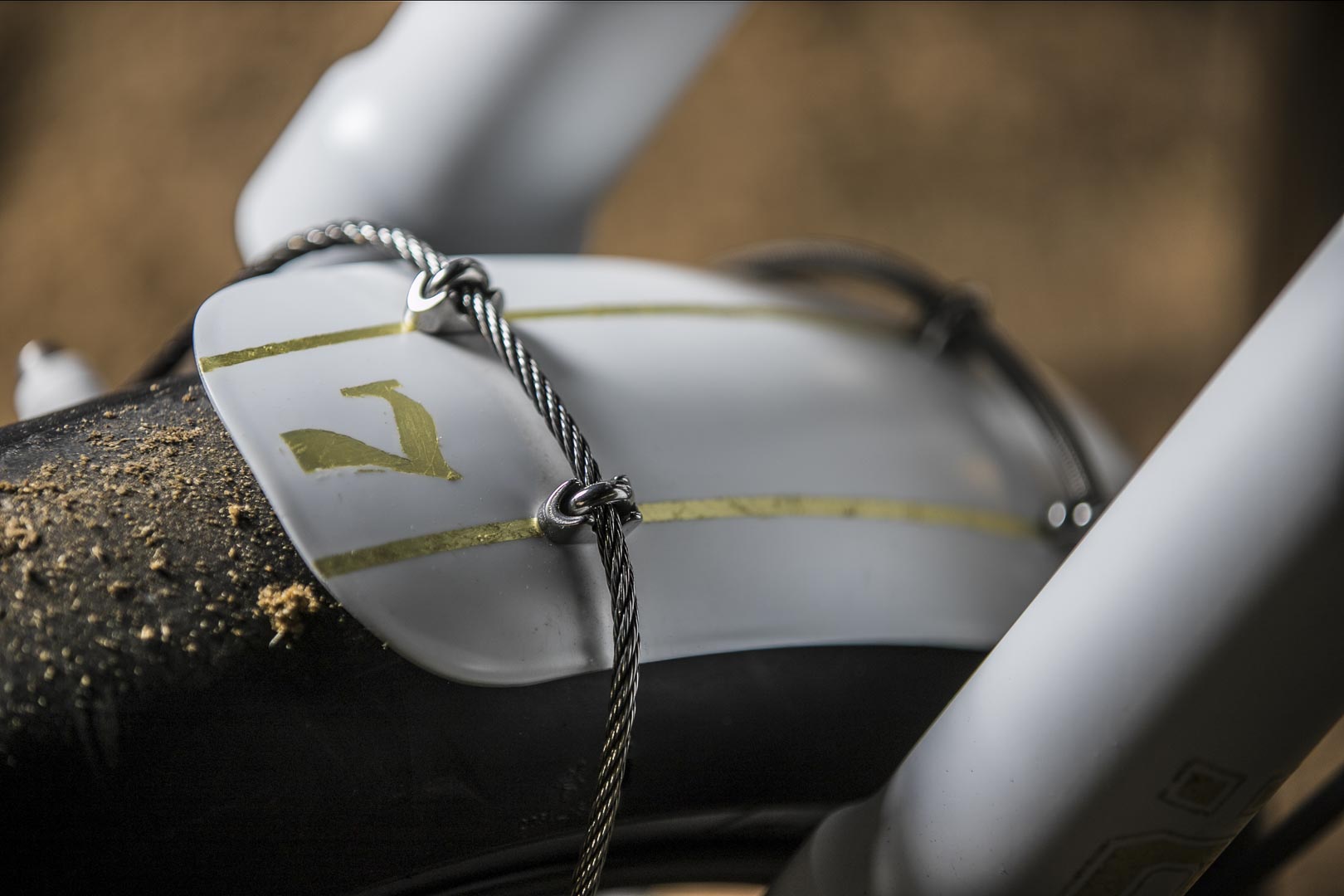 For the rear bodywork, I wanted it to be very short to free the rear wheel and give it a racing side.” The seat is covered in Alcantara, which has a microfiber pile that recalls suede. Nice-based NMB Design was responsible for building the seat.Throughout the motorcycle are decorative and functional cables. “Stainless steel cables through the length of the bike give it a luxury side,” Duke says, “and a finesse to this preparation.”Four Keihin carburetors are retained to feed the Honda motor, with the velocity stack intakes made in the Mediterranean coastal town of Toulon by USVRacing. The engine was fully restored by Duke Motorcycles for optimum performance and reliability, with the unique touch of a CNC Racing hydraulic clutch from Arezzo, Italy.

While the exhaust retains the four-into-four architecture, there is a substantial twist. Unmuffled, two pipes exit under the seat and another short pair peak out on the right side—both a nod to modern MotoGP designs and made from stainless steel. Speaking of MotoGP, the Duke CB500 sports Michelin Power Slick Evo racing tires.The Duke Motorcycles Honda CB500 Four Café Racer is a long-time coming in more ways than one. Getting his start customizing a Honda Dax (CT70/Trail 70 in the US), Duke has built dozens of custom motorcycles in preparation for this outstanding result.Working alone in his Tourrettes-sur-Loup shop 17 miles east of Nice, Duke has spent 700 hours on this motorcycle. “It is a personal project that I wanted deliberately different from what we can see,” he says, “a project that looks like me and that highlights my style and all the methods of work that I use.” 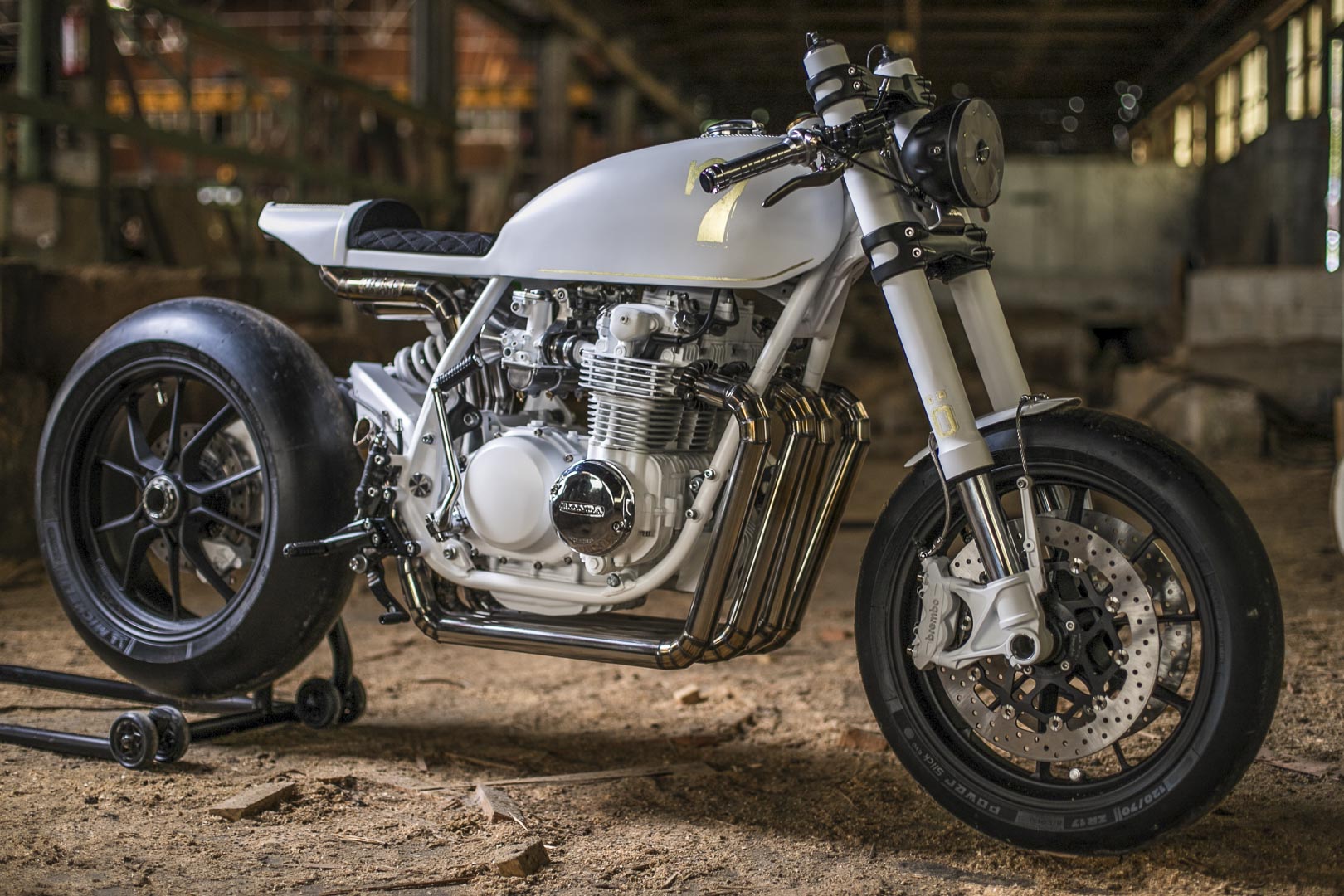 “I have been passionate about motorcycles since the youngest age,” Duke says, “but especially of design and manual construction. I studied mechanics, bodywork, and painting, which really helps me in my work. I’m crazy about music, and design in general. I have a passion for watches, architecture, and supercars.”Often, builders have twinges of regrets and second-guessing when they are done with their builds. That’s not the case with Duke and his CB500 Four Café Racer. “There is not really a thing that I would change,” he asserts. “It is really as I wanted it, and when I finish a bike, I think about the next one and do not think to modify what is already done. I tried to bring the French touch and maximum finesse of work to create this bike.” An indicator of that French touch is a French flag embedded in the tank, under a screen between two stainless steel cables. 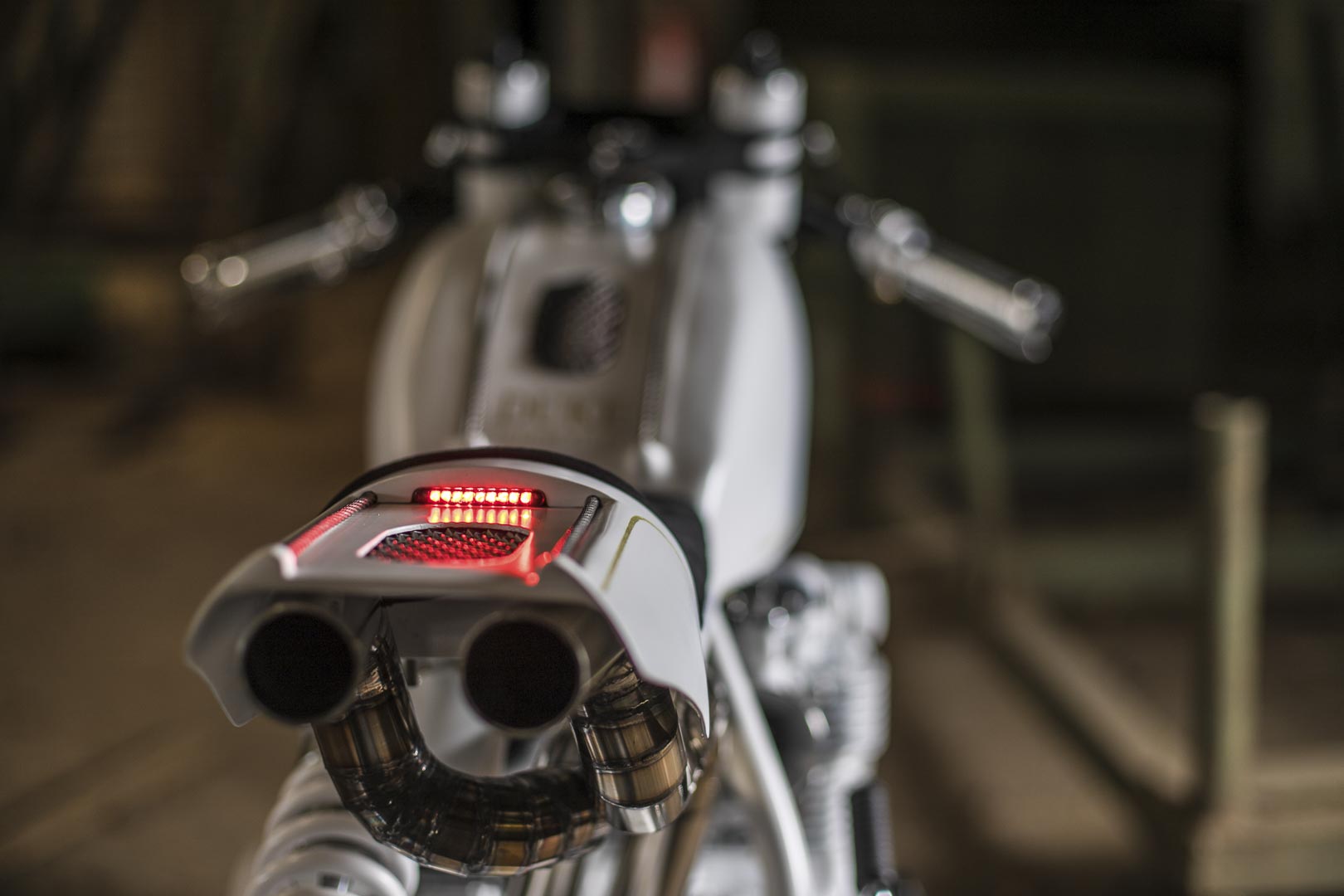 One reason Duke is satisfied with the CB500 Four Café Racer is that he built it for himself, rather than a customer. “With a client, it is a little different,” Duke explains. “I advise him, and I listen to what he wants. When I make a bike for me, I take the opportunity to do new things, show what I am able to do. With a client, we create a thing for two. The difficulty is that clients do not often project themselves. They often want copies seen on the Internet.”Undoubtedly, the Duke Motorcycles Honda CB500 Four Café Racer meets Lionel Duke’s standards for individuality. Likely, though, this striking white motorcycle will have clients of other builders pointing to it for inspiration.Photography by Julius Designs