Indian Motorcycle has partnered with MotoGP legend Randy Mamola and Workhorse Speedshop to compete in the Sultan of Sprint – a series that brings radical custom motorcycles together for some sprint-style drag racing. The awards are not just about speed, though; the customization is also awarded.

And the IndianxWorkhorse Sprint Racer that Mamola will race is truly unique. The bike, nicknamed the “Appaloosa” which derives from the famous breed of horses, uses an Indian Scout Bobber as the base. 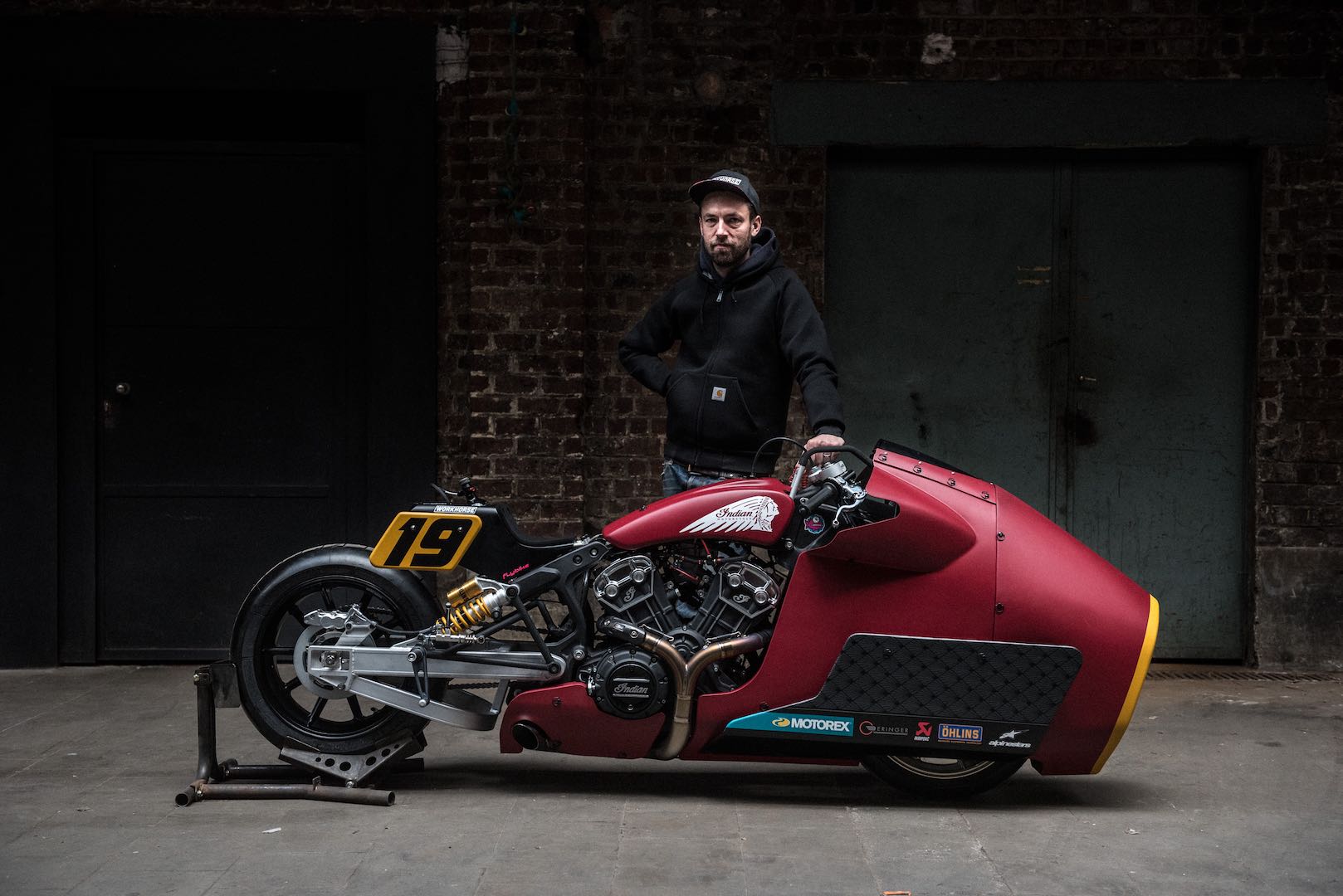 The Appaloosa was recently unveiled at The Reunion in Monza, Italy. It was built by Brice Hennebert of Workhorse Speedshop, and honors the Scout’s 100th anniversary.

“I wanted a name that could link Workhorse, Indian Motorcycle and speed,” Brice Hennebert said. “As soon as I discovered that the American horse breed Appaloosa was one of the world’s fastest horses, I knew I had the name for an American sprint bike built by Workhorse. After putting so much into this build, I’m excited to see the reaction to it and I can’t wait to see Randy blast it down the racetrack.”

Randy Mamola, who will compete under race number 19 to celebrate 1919, the year the original Scout was unveiled, says, “I’ve always been a big fan of Indian Motorcycle and I’m really looking forward to racing this amazing creation.

“It’s great to be part of this project, especially during the Scout’s 100th anniversary. With the Sultans of Sprint being such a unique series, it’s going to be a lot of fun soaking up the atmosphere, meeting the crowds and putting on a show for them.”

About the IndianxWorkhorse Sprint Racer

The IndianxWorkhorse was designed to compete in the Factory Class; motorcycles must be a four-stroke (air or water cooled. The engine capacity is unlimited, but the power-to-weight ratio must remain a 0.65 horsepower per kilogram. 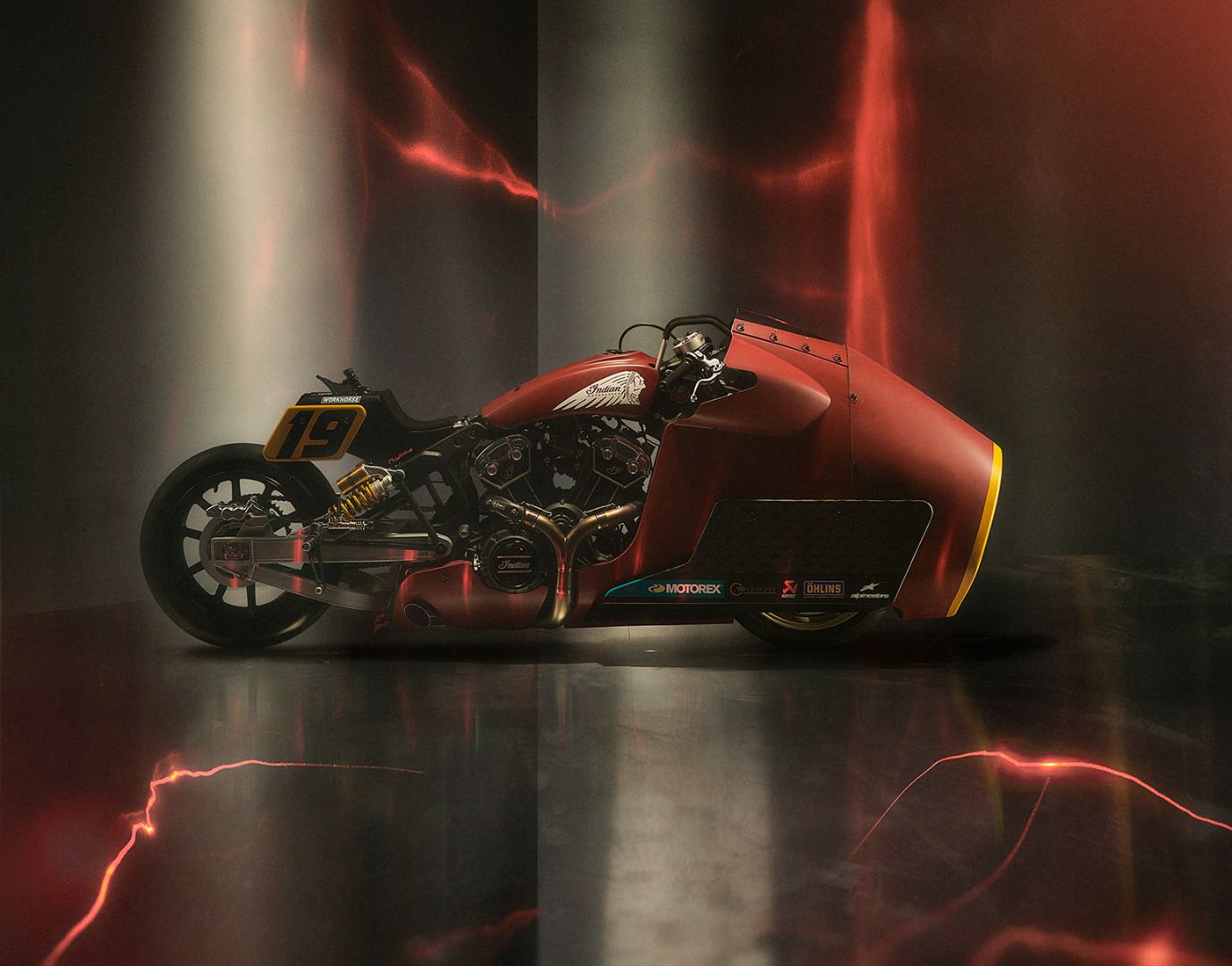 The bike took more than 700 hours to design and built, and uses premium components from:

After completely stripping the Scout Bobber, Brice cut and narrowed the original fuel tank, retaining the side profile, to create a cover for a new aluminium fuel cell which holds just 2.5 litres for sprint racing.

With the fuel cell in place, work focussed on the riding position, a critical element for quick starts. A new sub-frame was fabricated to better support the rider under hard acceleration and combines with lower clip-on handlebars and drag-style foot controls to tilt the rider forward and keep weight over the front wheel. 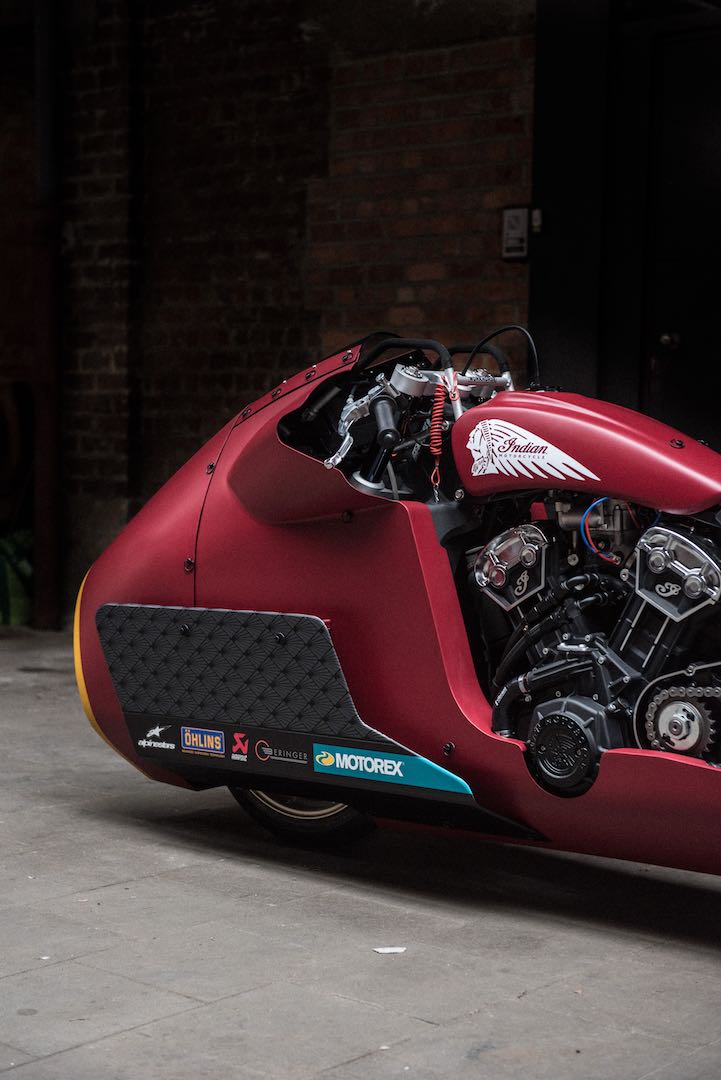 To further enhance traction when the flag drops, Brice designed and welded an extended aluminium swingarm. With parts CNC machined from his drawings by Beringer Brakes, the swingarm is mated to advanced, fully adjustable suspension technology from Öhlins. Matching the STX 36 piggyback rear shock absorbers, Öhlins also supplied Retro 43 front forks and a steering damper to ensure the best possible grip and stability enabling the full performance of the bike to be utilised.

With a rolling chassis and elements of the streamlined fairing starting to take shape, Brice took Appaloosa to Akrapovič where a bespoke titanium exhaust system was created for maximum power and the best possible sound. 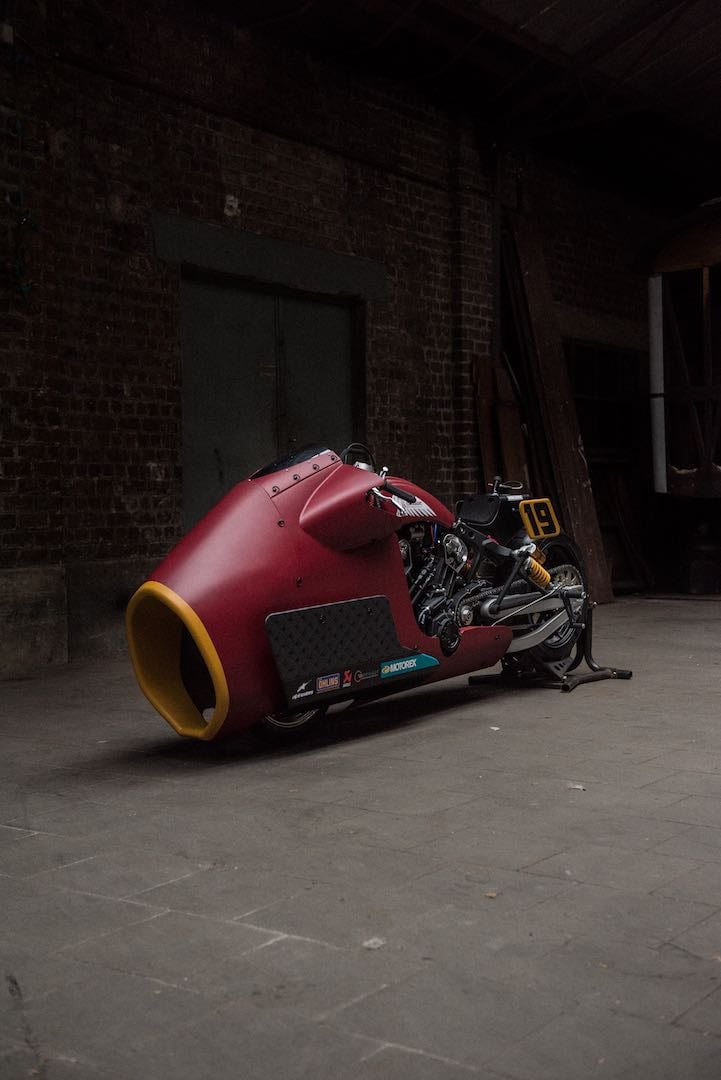 Without making any internal modifications, engine power has been increased to 130 horsepower with a combination of the Akrapovič exhaust, a racing ECU, Power Commander, direct intake, Nitrous Oxide Injection system and MOTOREX oil. To get the power to the tarmac, the original belt drive has been converted to chain drive and a quickshifter ensures swift and precise gear changes.

Bringing the rapid racer to a controlled stop is the complete 4D Aerotec braking system from Beringer Brakes. The 4D system features two 230mm discs per caliper for increased power over standard single discs as well as reduced inertia to aid acceleration. Beringer Brakes also supplied the handlebar controls and buttons as well as CNC machining many of the parts designed by Brice.

Using hosing supplied by Vibrant Performance the cooling system has been simplified for weight reduction and for a cleaner look around the engine. Additional components from Vibrant such as welded dash connectors, fuel and water tank caps and heat protection hoses add finishing touches to Appaloosa. 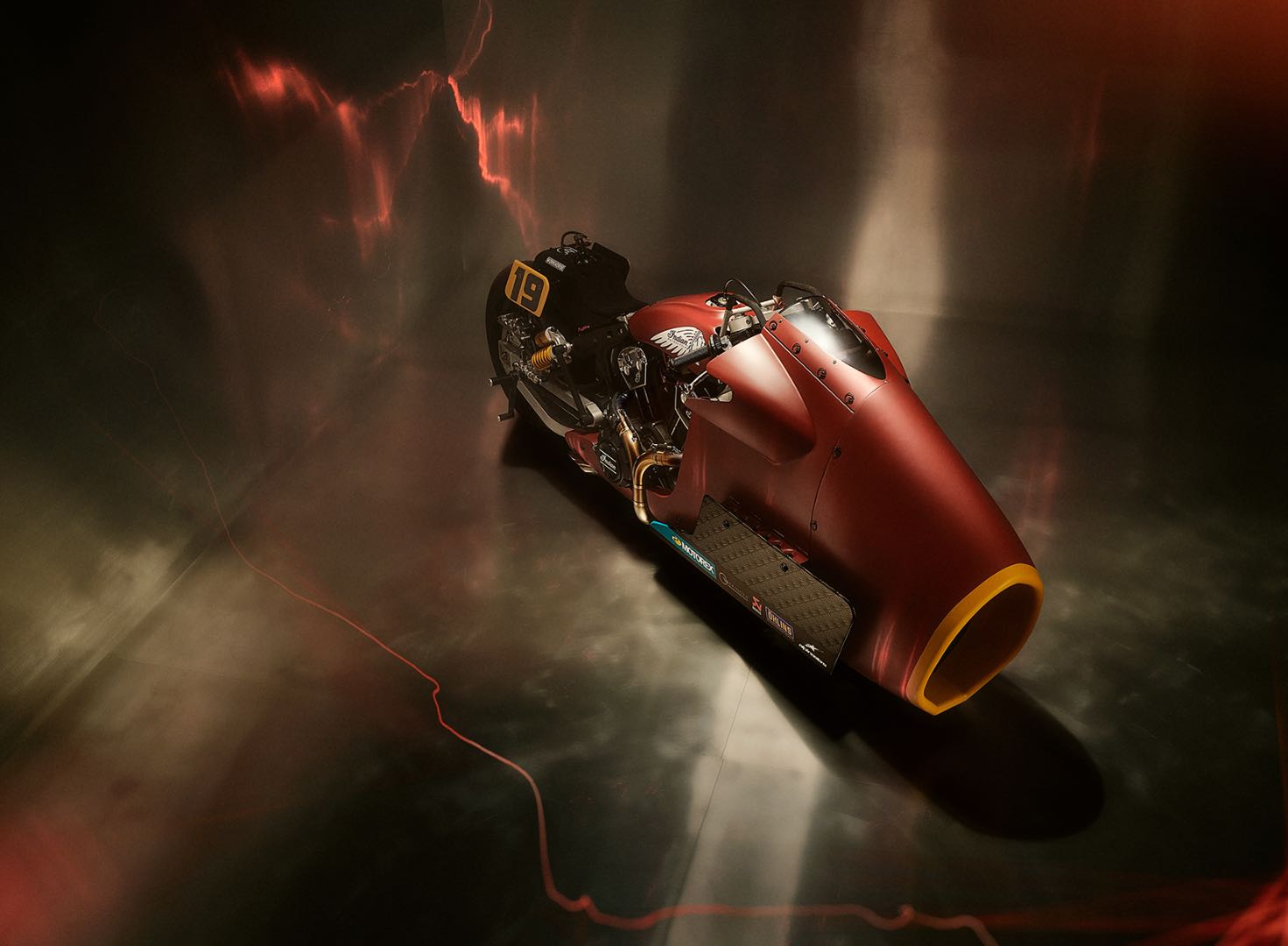 As well as competing in the Sultans of Sprint championship, Indian Motorcycle also plans to have the bike on static display in the UK at The Bike Shed (May 24-26) and during Wheels & Waves in France (June 12-16).