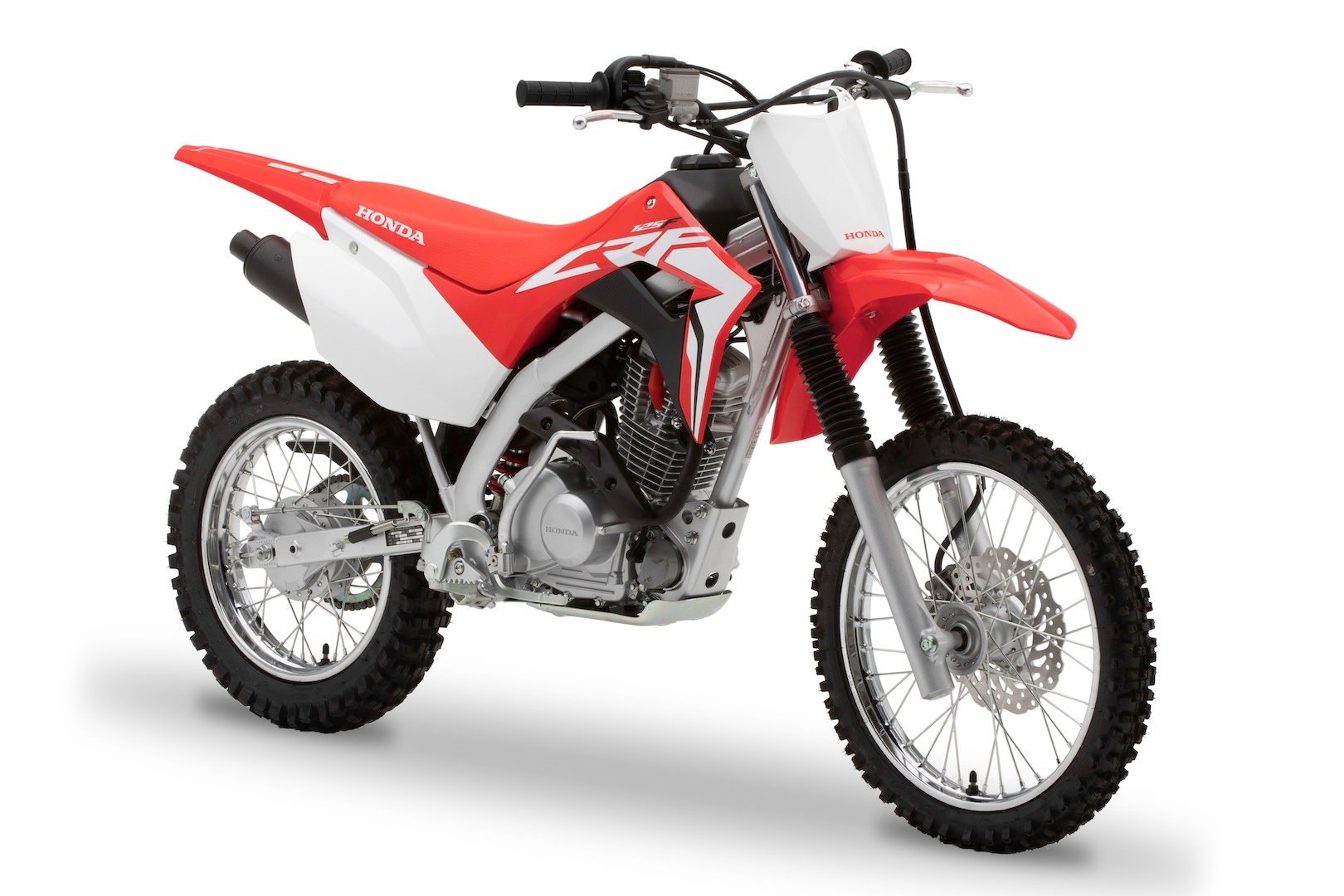 2. Both 2019 CRF125Fs have updated suspension travel numbers—some longer, some shorter. The standard CRF125F loses about a quarter-inch of fork travel, while picking up an inch of shock travel. That makes the travel at both ends about equal, for improved balance. Fork travel is unchanged on the CRF125F Big Wheel, with the rear wheel getting nearly three-quarters of an inch more travel. In both cases, rear wheel travel is a bit longer than the front.3. Keihin fuel injection with a 22mm throttle body replaces a 20mm carburetor. Both motorcycles share the same motor, and they both get the upgrade. That means riders won’t have to fiddle with a choke on cold mornings to warm-up the 125cc two-valve engines. There won’t be a petcock any longer, and that means no reserve. Instead, when the tank gets low, a warning light tells the rider to add more gas. The EFI system will also make the CRF125Fs run better at varying altitudes.4. Along with the EFI, the 2019 Honda CRF125F gets transistorized ignition. CDI works fine, but a transistor ignition is a superior, less complex, and more reliable technology.5. The new steel fuel tank holds a bit less gas due to the fuel pump, but expect improved fuel economy for a net increased range. There’s room for about 13 fewer ounces of 87 octane fuel in the new tank, putting it at an even gallon capacity.6. The new chassis and EFI adds a few pounds to each CRF125F. The standard CRF125F weighs two pounds more, while the CRF125F Big Wheel picks up five pounds.7. The seat heights are down on the new CRF125Fs, along with the ground clearance. With the new frame and suspension travel, the 2019 Honda CRF125F has a seat height and ground clearance about a quarter-inch lower than last year. The 2019 Honda CRF125F Big Wheel’s seat height is unchanged, and the ground clearance is down just a hair. The standard CRF125F’s 29.1-inch seat height is 1.8 inches lower than the CRF125 Big Wheel. The Big Wheel has 10.3 inches of ground clearance—a full two inches more than the standard CRF125F.8. As you would expect, the 2019 Honda CRF125F Big Wheel has a larger set of wheels than the CRF125F. The CRF125F has a 17-/14-inch pairing, while the CRF125F Big Wheel goes with a 19-/16-inch set. That gives the CRF125F Big Wheel access to some high-quality off-road racing rubber used on 85cc motocrossers. Both 2019 CRF125F models use CST tires (a rebranding of the long-running Chinese budget brand Cheng Shin).