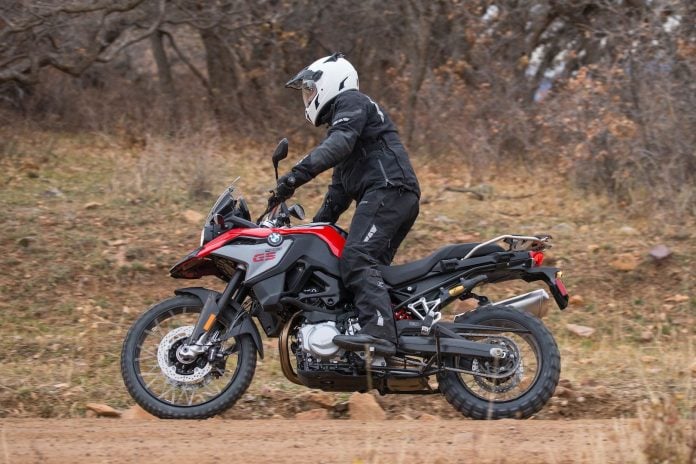 Following a decade as the lead player in BMW’s mid-weight adventure touring platform, the parallel-twin F GS line gets totally revamped this year with the 2019 BMW F 850 GS leading the way.I headed to Gateway Canyons Resort, a Colorado tourist center tucked away in the middle of nowhere between Grand Junction and the famed Moab in Utah. Both the off- and on-road riding situations impressed, as did the bike. 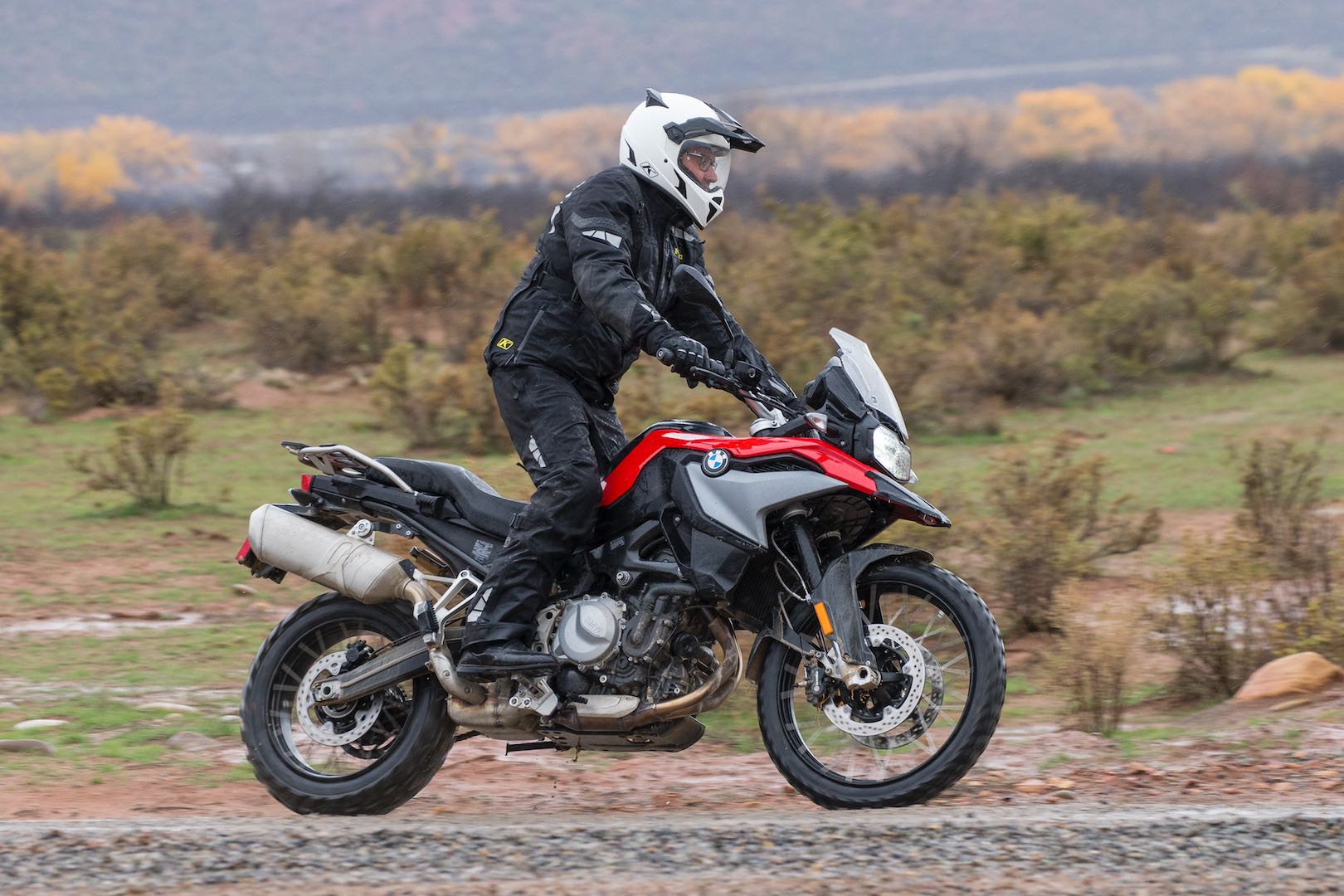 Here are the essential Fast Facts on riding the all-new 2019 BMW F 850 GS in a wide variety of conditions.1. One of BMW Motorrad’s primary goals with the revisions is to appeal to a wider group of riders – from the short to the tall, and every weight in between. To accomplish that goal, the 2019 BMW F 850 GS not only grows in displacement and power, but also technology and ergonomics.2. Peak output is up by five horsepower to 90, but it feels like much more. The F 850 GS’s parallel twin grew from 798 to 853cc, which naturally leads to additional power. The new F 850 GS creates 90 horsepower at 8000 rpm compared to 85 horses at 7500 on the previous 800, and 63 ft/lbs of torque at 6250 rpm rather than 61 ft/lbs at 5750 rpm.3. The firing order is changed and that gives the F 850 GS an improved sound. The new twin now has a 90-degree crankpin offset and 270-degree firing order compared to 0-degree crankpin offset and 360-degree firing order on the previous powerplant. This creates a much bolder sound that is apparent from the first rumbling of the new exhaust.4. The engine revs quicker than the previous-gen F 800 GS. This is optimal for tight ADV riding where instant power is sometimes needed for clearing rocks or logs.5. All this power arrives with much less vibration through the handlebars and foot pegs. BMW Motorrad achieved this by adding two counterbalancing shafts. The difference makes long rides more comfortable, especially on lengthier stretches of the asphalt. 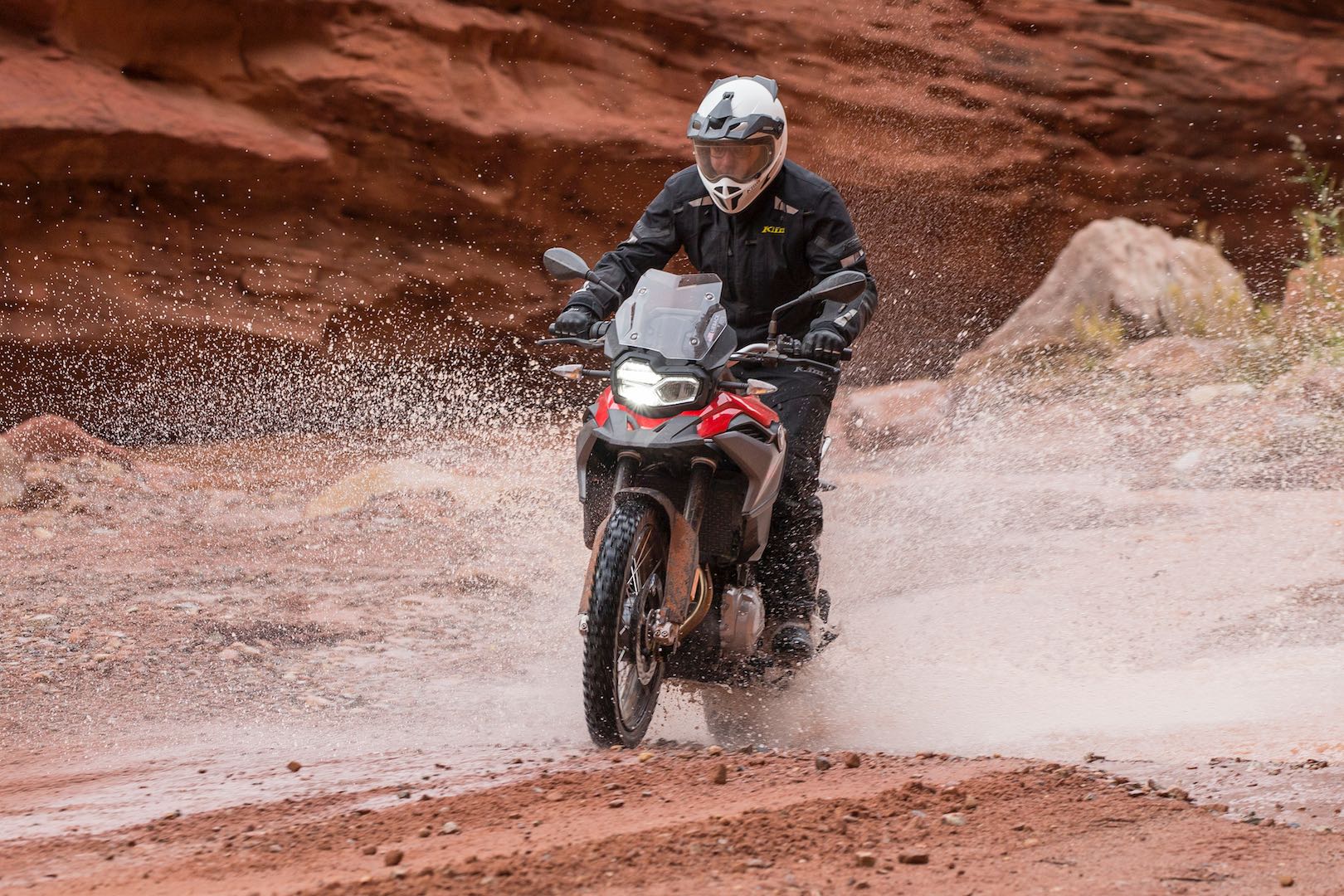 6. The clutch is updated, and helps ease clutch-finger fatigue on some of the more technical portions of the double-track trails. The clutch is now anti-hopping, and has a much easier pull. On some sections of the Rose Garden Hill Safari Route that snaked along and through Onion Creek, I used only one finger instead of my usual two fingers. Speaking of levers, the clutch and brake hand controls are now fully adjustable.7. The F 850 GS has a wider-ratio transmission. The lower first gear is a huge help off-road, while the transmission’s higher upper gears keep the revs down while at highway speeds. For most of the more aggressively paced on-road rides, I remained in fifth or the top of fourth for optimal power.8. The standard quickshifter is flawless up and down clutchless shifts. I still found myself using a clutch off-road out of mostly habit, but on-road that clutch lever was never touched except to get rolling.9. Due to the transmission’s revised gearing and engine revisions, BMW claims that gas mileage is 57 mpg for the 850, a 2 mpg improvement over the 800. With a four-gallon tank, on paper this equates to a 228-mile range. I saw the very noticeable low-fuel warning flashing across the TFT gauge at around 120 miles that said I had 40 remaining. But then again, I also saw 126 mph in the fullest tuck possible and BMW claims a top speed of 125 mph. Truly, your mileage may vary. 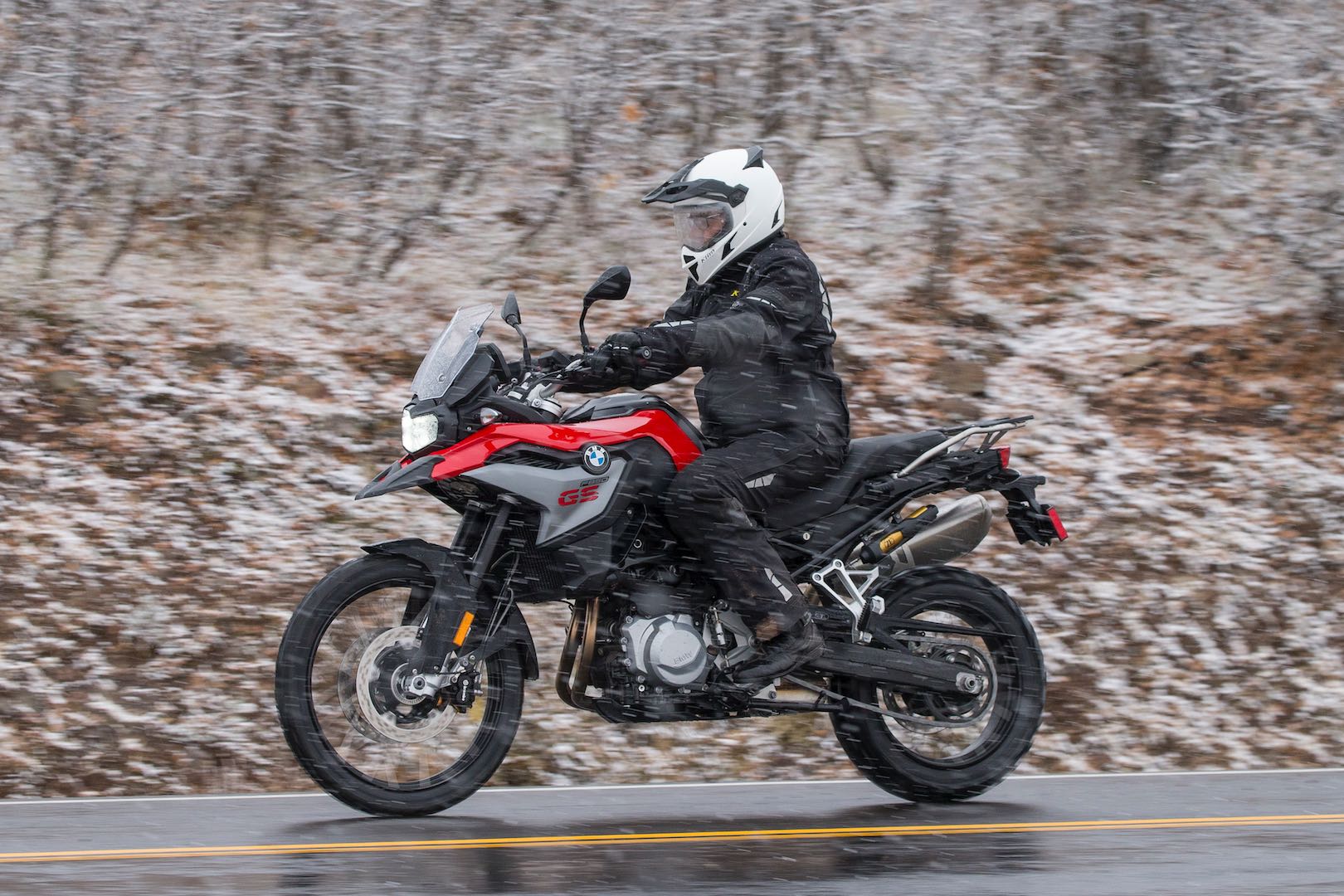 10. Touring riders will appreciate standard ABS Pro, cruise control, and heated grips. I rode in temperatures in the freezing range, and heated grips are a must for true adventures.11. Gone is the former under-seat plastic rear gas tank, and in its place is a traditional gas tank. I welcomed this more than the additional horsepower because I wasn’t sold on the old F 800 GS’s feel—something I constantly blamed on the under-seat gas tank. Of course, this makes filling much easier, especially if you upgraded to the keyless fob version where a physical key isn’t needed to open the tank.12. The new tank also improves wheel-load distribution. It is 49 front/51 rear on the 850, rather than 47/53 on the 800. This certainly helped keep the front end planted quicker in the loose stuff—especially sand. The traditional gas tank also slims the tail design, and aids in easier gripping of the chassis during standing up rides.13. Also new are the cross-spoked 21-inch front and 17-inch rear wheels, and they took a heck of a beating. This is the first time BMW offered cross-spoked wheels on the midweight GS, and they are much stronger.14. Designed to cater to a wider group of riders, the base seat on the F 850 GS is now 33.9 inches vs 34.6 inches on last year’s 800. Nearly three-quarters of an inch can mean the difference between dropping a bike when putting foot down or not. With a 34-inch inseam, I was much more comfortable on this model than the 800, especially standing up—the position I did about 75 percent of my riding in. To further cater to shorter or taller riders, BMW offers seat options as high as 35 inches with a simple change of seat, or as low as 32.1 inches with seat and lower suspension options. 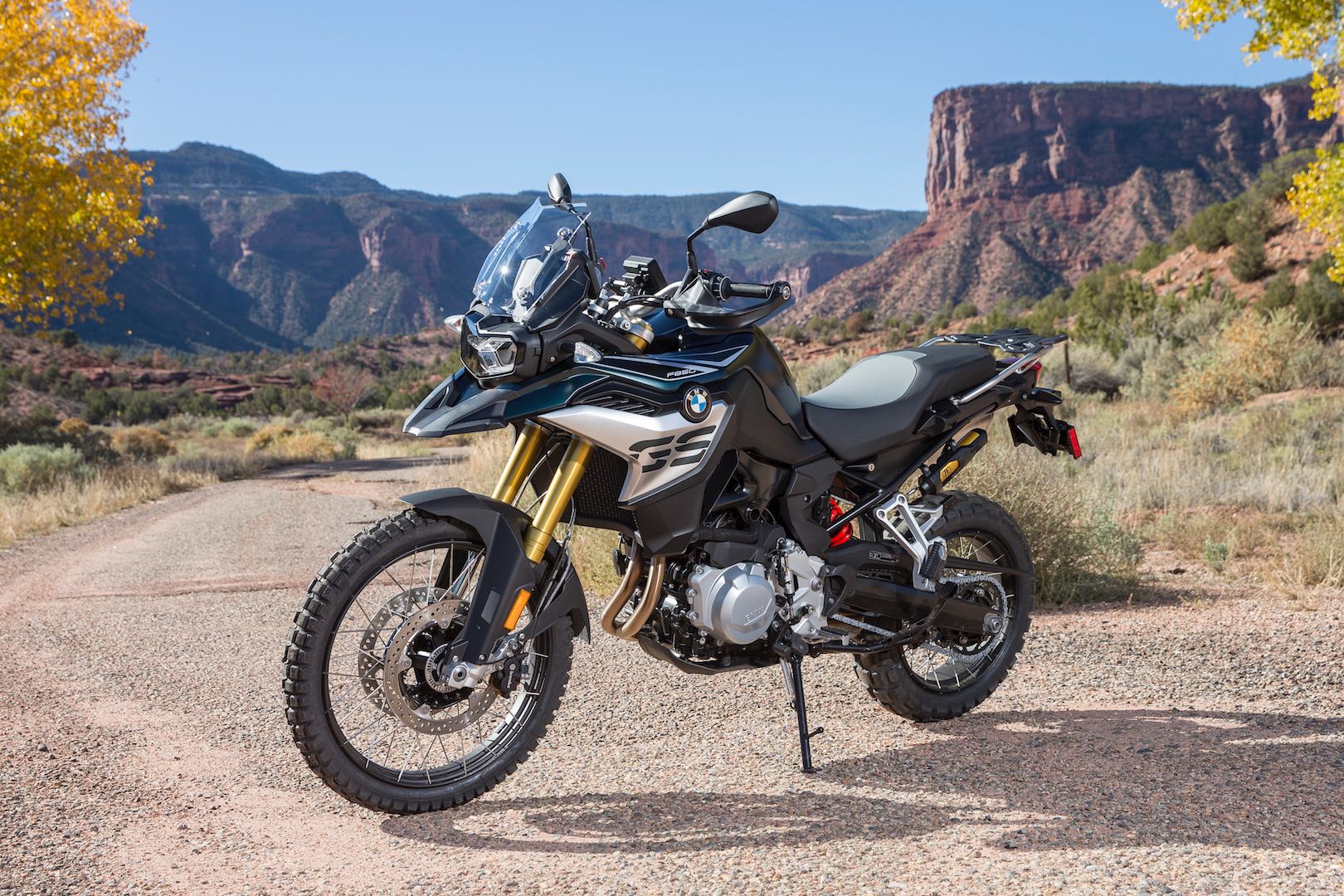 15. The suspension was also revamped with the off-road in mind, and my 185-pound frame had few complaints. I would want a bit more adjustability to stiffen the front, but that was due to the tight technical riding I was performing. For fire roads and typical on-road riding, the suspension settings are optimal from the factory.16. As part of the suspension revamping, the ground clearance grew 1.3 inches to 9.8. Even while riding at pace, I had zero issues bottoming out.17. The exhaust and final chain have switched to the more universal positions. The high exhaust can is now on the right, and the chain on the left. As most riders pickup and push their bikes up from the left side, the lack of exhaust there makes this task much easier.18. The footpegs now feature removable rubber mounts for additional off-road grip. Although I had street-bias boots on, I never lost grip on the new pegs, even through a succession of 30+ small water crossings soaked my feet. 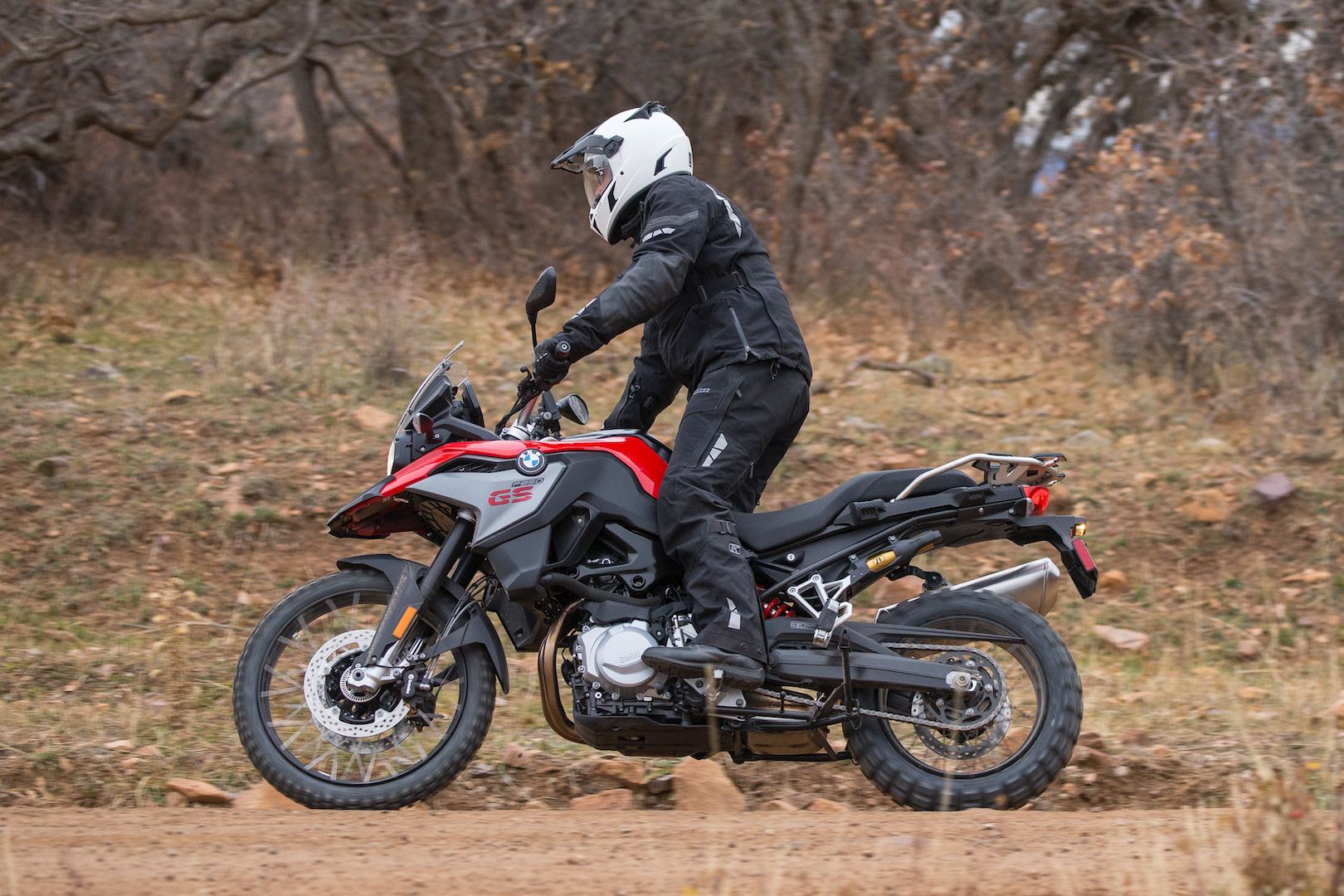 19. BMW offers the 2019 F 850 GS in a bewildering array of “Packages” and “Styles,” but no standard model. Undoubtedly, the $13,195 standard model is available in some markets, but not the United States. You have to choose between the $2400 Select Package, which functions as at standard model in the US, or the $3450 Premium Package. The Premium Package adds semi-active electronic suspension, a tire pressure monitor, keyless ignition, an LED headlight to the Select Package. There is also Exclusive Style and Rally Style color/option choices for $275 each, though not all colors and styles are available with different packages. Consult with your dealer, but know that the effective base price of a F 850 GS in the United States is $15,595.20. BMW says the F 850 GS’s target rider is a “grown-up” adventure rider who seeks spontaneous adventures, rather than the full off-road and long-distance worthiness of the R 1250 GS. After riding the new F 850 GS in the various adventure-worthy conditions, it was clear BMW has certainly completed that task.Riding Style: