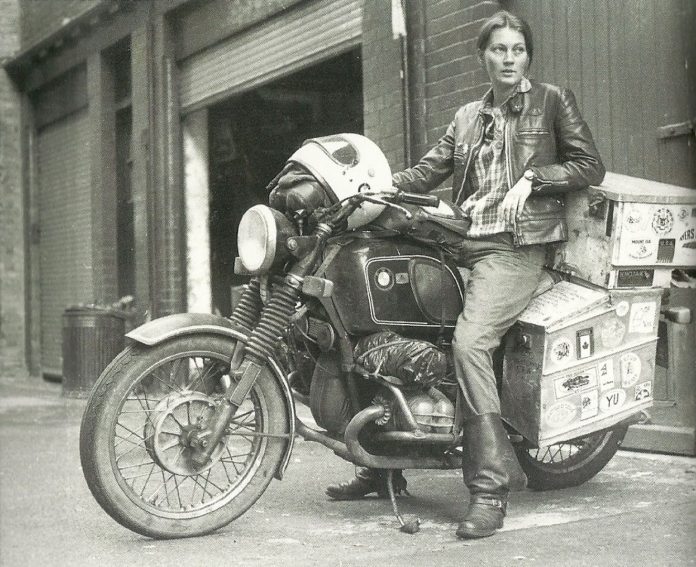 At 23, Elspeth Beard had options. All the options available to any young, bright lady in London in 1982, to be sure.From a solid, if somewhat eccentric family background, she had matured to the stage of looking ahead; career, friends, family, and all those things we think about when we’re starting out.Seeing the classic structures of Europe on family vacations in her youth gave her an interest—and she had a talent for—architecture but that would have to wait. She had something more on her mind.She had shown signs of being independent, if not outright rebellious at an early age, getting kicked out of the boarding school she was enrolled in. Academics early on were very difficult, but not for want of ability. 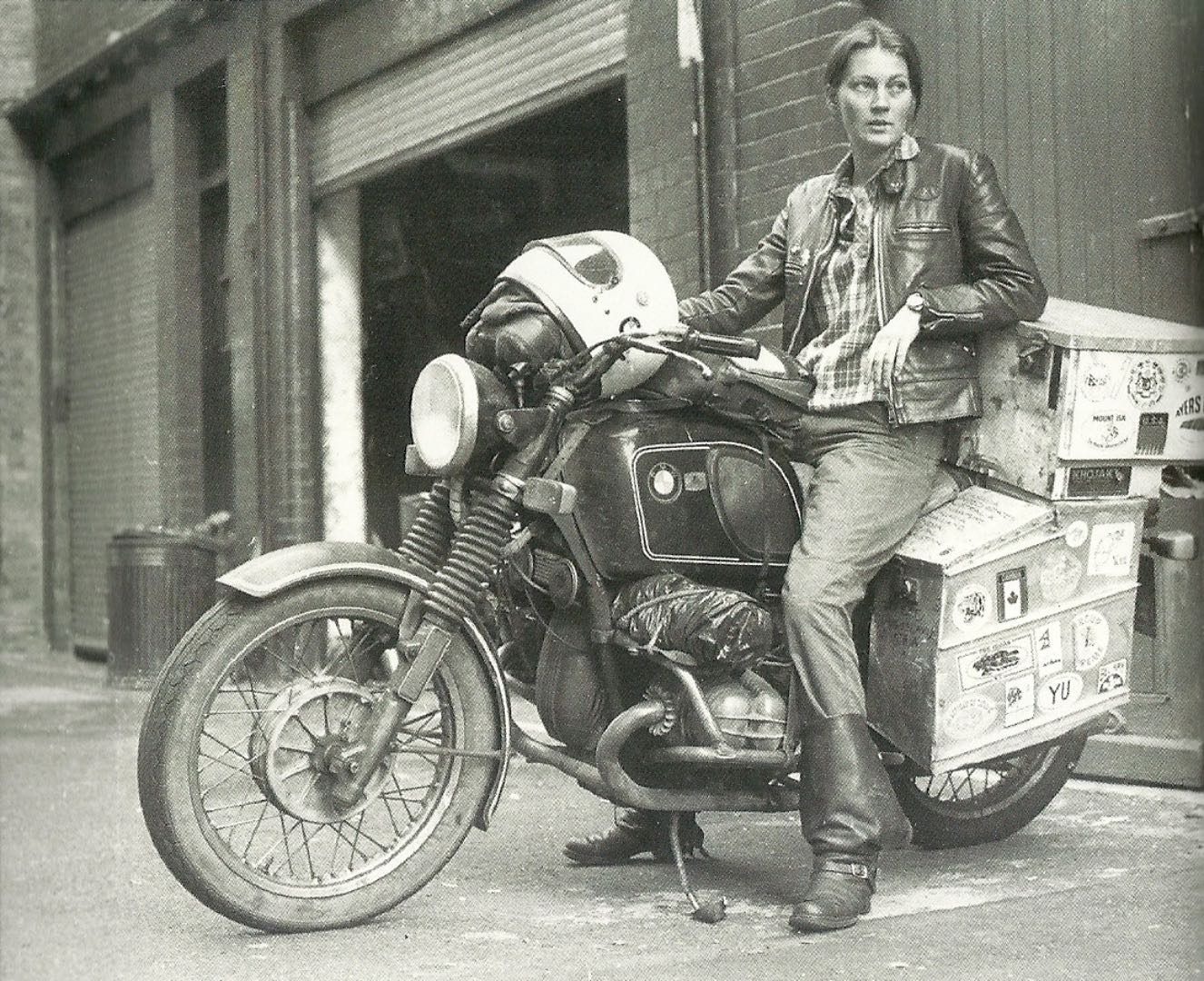 At age 16, it was finally discovered that she was dyslexic. Overcoming that and other obstacles would imbue her with a mental toughness and agility in problem-solving that would serve her well in odyssey that lay ahead.By 1979, she had her first motorcycle—a second-hand Yamaha YB100. Soon, the Yamaha was sold and she moved up to a 250cc Honda. By age 17, she had discovered the range and freedom a motorcycle provides on the open road and she began to think about touring Europe, and eventually, the world. When she mentioned the idea to her friends, it was met with disbelief—then laughter.Eventually, the Honda was sold off and replaced by what would become a very important part of Beard’s life: a 1974 BMW R60/6. Before long, she was touring Europe on the BMW and visions of the world tour began to take shape. Longer and longer tours on limited funds built her confidence in her BMW and in her open-road survival skills.The spring and summer of 1982 proved a turning point. An important relationship ended, a key step in her professional education in architecture was completed and she had prepared her BMW for long miles.Though she was by that time a very experienced motorcyclist, a competent mechanic and had worked tirelessly to save enough money to make an around-the-world journey, even up to the day she left England in October 1982, she harbored thoughts of calling it off. Happily, she didn’t. Had she done so, she—and we—would have missed out on the adventure of a lifetime.From her journal of the trip, her photo archive and long-held memories, Elspeth Beard has recreated that incredible journey in her new book now featured in our Rider’s Library, Lone Rider the First British Woman to Motorcycle Around the World.Her narrative is moving, concise and engaging as she takes the reader along on the entire 35,000-mile journey. Fact is, there is a lot more to the story than one might expect. While the detail and clarity of her descriptions of the people, places, hazards, problems and solutions would do any journalist proud, it is as much about her personal journey and struggles as it is about exotic locales, treacherous roads and hostile conditions.Things happen on this world tour that even experienced world travelers would not expect and some of them could only happen to a young woman traveling alone. Her grit, wit and determination keep her from quitting the trip when most probably would. Then, just when she seems to be in a jam that would stop her cold, she seems to have that intangible factor of luck; some might call it having an Angel on her shoulder.For example, on her tour south of Perth, Australia, miles from nowhere, the wiring loom on her BMW suddenly shorted out on the frame under the gas tank, lit up and melted into a tangled mass. Seemingly beyond repair and hope, she spotted a lone shack about a quarter mile away.Pushing the bike to what she hoped was at least a place to get some help or rescue, she was astounded to see a sign out front that said Auto-electrician! With the help of the wiring diagram from her Haynes manual for the bike, the electrician managed to rewire the BMW.In another episode, her alternator failed in a small town in Thailand. A fellow came along who directed her to a small shop only a short distance away on a side street. Despite the shop’s minimal equipment and not a word of English being spoken, the problem was diagnosed and a failed diode replaced. What’s more, the mechanics declined any payment other than a six pack of beer Beard delivered later.Later, still in Thailand, Beard struck a dog on the highway and the crash left her and her BMW battered. A Thai family took her in, nursed her injuries and helped get her bike back in running order—again all across the language barrier. Further on, in Nepal, she snapped off her ignition key and was without a spare.Finding a blacksmith shop attended by none other than a kid about ten years old, the kid hand-crafted a functional replacement key from a blank piece of flat stock using nothing more than a hacksaw and file! 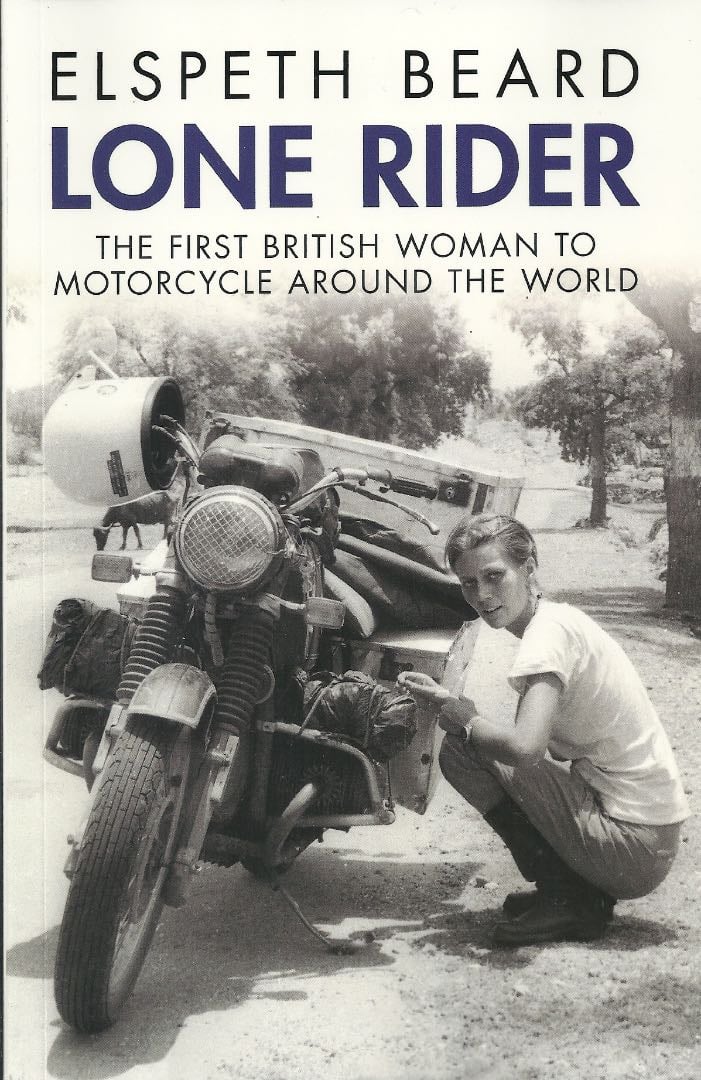 The challenges were as diverse as the terrain as Beard wended her way around the world. From incompetent and greedy border bureaucrats, physically aggressive men trying to take advantage and illness, injury, mechanical problems to flooded roads, intense heat, numbing cold and relationships that pulled her in multiple directions at the same time—even from thousands of miles away. In the end, she came to the realization, “Maybe I needed danger more than I needed security.” That said, she also concluded, “Loneliness was a high price to pay for independence.”Whether you ever contemplated long-distance extreme touring for yourself or not, Lone Rider is an exceptional read. Any motorcyclist could find that aspect of the story fascinating, indeed, but the truth is, anyone interested in an epic story well-told will want to give it a read.Today, Elspeth Beard is an award-winning architect based in the U.K. We had the opportunity to do an e-interview with her, posing a dozen questions in follow-up to her book. Here’s what she had to say:1—Would you do it again (mostly solo)?I would not do it again simply because there is still so much of the world I haven’t seen. I have never stopped traveling since I got back in 1984. I have traveled extensively around Africa, South America and in 2002 I traveled around the world again.  I have flown around Australia [I got my pilots license in 1992], ridden a Royal Enfield from Nepal to Tibet, walked the Atlas Mountains and spent 4 years helping a friend take motorcyclists on tours all over the world. I have revisited some of the places and I wished I hadn’t, I think is better sometimes to remember places as they were.2—Advice for those you may inspire to give round-the-world travel by motorcycle a go:It is a journey that will change you forever, traveling is so important to understand other cultures and this understanding helps make the world a safer place. I discovered strengths I didn’t know I had, taking yourself out of your comfort zone is never easy but very rewarding. The hardest thing is to leave but once you’re on the road you will discover so much about yourself and the world you will never be the same person again.3—Hardest lesson learned: Sorry can’t think of anything!4—Greatest personal reward earned/learned:I learned that I could cope and deal with anything, I was not afraid to take anything on and believe that there is never a problem that I cannot solve. This self-belief gives me the confidence to take on any new challenges and not to be afraid of anything.  It taught me to think out of the box and approach problems in a different way to solve them and I have used this in my life and work ever since.5—Most valued tool in your kit, then and what would it be now:Apart from my tools for my bike which were invaluable it would be my Swiss Army penknife and it would still be the same now!6—Most valued bit of riding gear and advice on what to take these days: The riding gear I had was very basic, Bell helmet, Lewis leather jacket, one pair of gloves and a pair of Lewis leather boots and a pair of jeans. I wore the same every day. I had a plastic over jacket when it rained. Now of course the choice of riding gear is endless and it comes down to personal preference and budget. I would say buy the best you can afford; cheap gear is a false economy.7—The one thing you wish you had along—but didn’t:I honestly can’t think of anything, if I needed anything then I would buy it along the way. I also sent stuff home when I didn’t need it anymore to save carrying it.8—Most important personal preparation (i.e. physical/mental/emotional preparation or adjustment):I was 23 and felt invincible, I didn’t think about personal preparation I just prepared my bike and left.9—That BMW is no doubt the pride of your collection—what other bikes do you own?I have an BMW R80GS Basic, and two off-road bikes, a Beta Alp 350 and a Yamaha 225 Serrow.10—If you could take off for a ride anywhere in the world right now, what would it be? I would love to visit Bhutan.11—In the video on the Octane site, you relate that the journey made you what you are today—what qualities or characteristics come to mind?Perseverance, patience, resilience, never accept ‘no’ for an answer and never give up!12—You mentioned a movie producer contacting you about the rights to the story—is writing a screenplay in your future and a feature-length motion picture in ours?I have numerous producers who want to take out an option and but it’s difficult as once you sign the rights away then you lose control and have to have complete trust in the person/organization. I am in two minds and would rather no film than a rubbish one!Book Data: