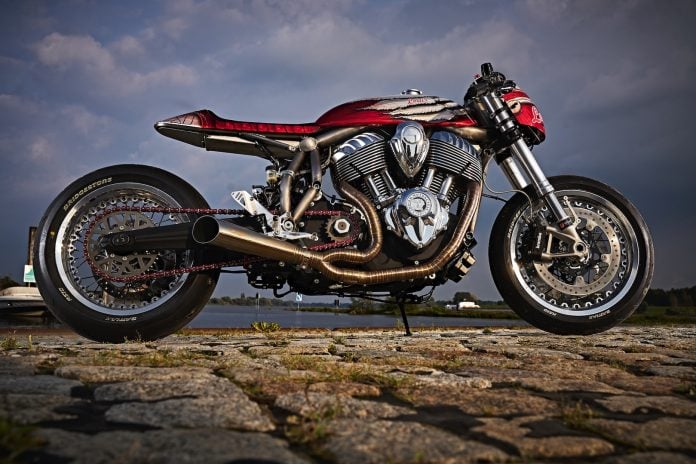 “When we build a new bike,” Hamburg-based Detlev Louis Motorrad’s Kay Blanke explains about the striking motorcycle he designed, “we look for models that nobody else touches.”Thus, the Louis Engina was born, featuring a modified Indian Thunder Stroke 111 motor in a café-inspired minimalist chassis that was designed with more than aesthetics in mind—Engina has also seen the heat of competition.“We have subjected a Honda NX650 Dominator, a Kawasaki ER6, and a Honda VFR1200F to an extreme type of change,” Blanke tells us. “With the exception of Roland Sands’ board tracker, we could not find a radical custom from the Indian Chief, and so we did it. This makes the conversion difficult, but it’s something special and the before-and-after is great.” Without any doubt, the Indian Engina qualifies as “something special.” 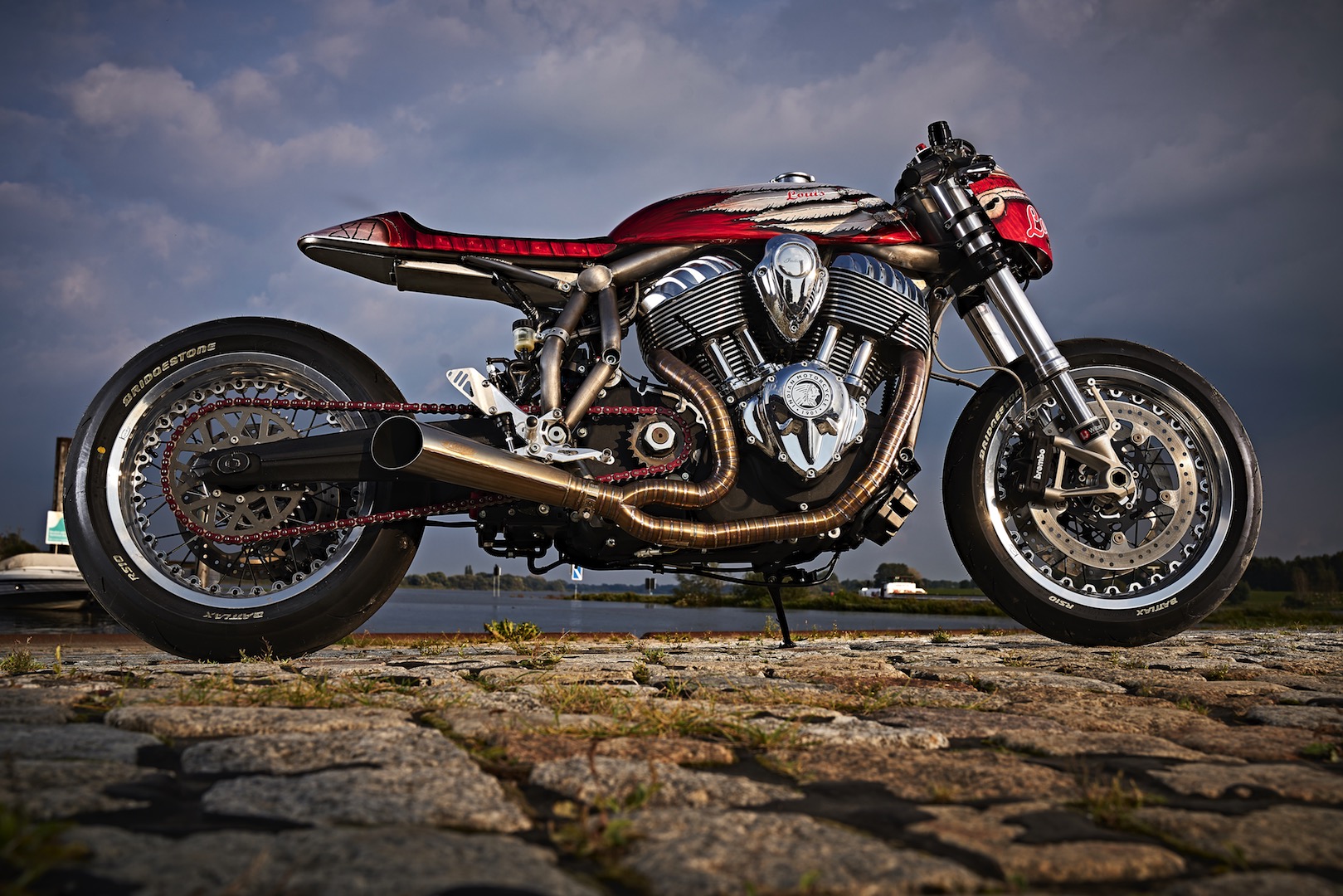 Detlev Louis, a racer, founded the eponymous company in 1938 as a motorcycle garage. That led to importing iconic English brands such as AJS, Matchless, and Royal Enfield, as well as selling Kawasaki motorcycles. Detlev Louis Motorrad evolved into Europe’s largest retailer of motorcycle apparel and parts, with the name shortened to simply Louis.Not content with being a retail giant, Louis maintains its connection with motorcycles, rather than simply accessories. “With custom bikes,” Blanke says, “we keep our roots alive and show that we know more about the business than selling jackets.”“Ten years ago, I suggested to the company that we should show what we really can do,” Blanke says. “Until then, we have made bike conversions that every customer can imitate without any problems. We still do that today, and that’s very important, but when we started the first ‘real’ custom bike, it was awful. ‘That must be black!’ ‘That has to be silver!’ ‘We’ll just leave it!’ Democracy is a great thing, but everyone knows about too many cooks.”“Since then we have decided on a new path,” Blanke continues. “To build a bike, you need specialists as well as a house builder—an architect, bricklayer, roofer, electrician, and so on. If you ask for roles, I’m the architect, designer, and marketer of the Louis bikes. 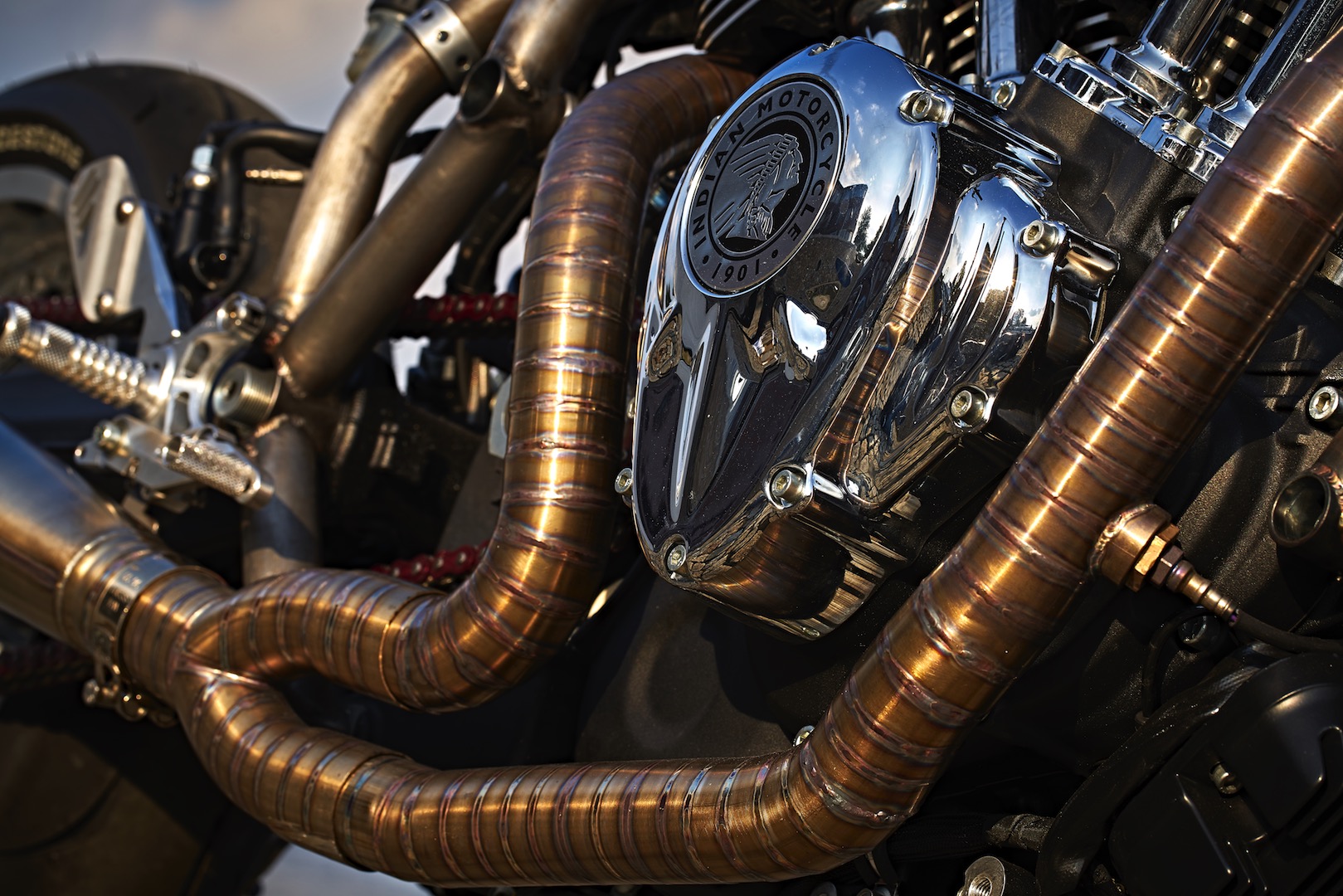 “Martin Struckmann and Detlef Stüdemann disassemble the original bike and put it back together with the new components. The great craftsmen around are Sam Wassermann of Uno for the frame, Michael Naumann of Naumann & Co for the bodywork, tuner Ulf Penner for the engine, and Danny Schramm of Schrammwerk for the paint job. Let’s not to forget companies like Wilbers, Kineo, Shark, or Brembo who support us with their parts.”“Kay Blanke always comes with a master plan around the corner that you cannot refuse,” says Struckmann. “He draws the bike in different variants on the computer, of which we then decide on one. I actually wanted a softer conversion, something like a naked Chief that retains the original frame. But in the end again, his design was so wicked and sexy at the same time that we just had to do it that way.”As one would expect when building something as exotic as Engina, there were a variety of obstacles to conquer. Rather than go the expected route of using a Scout engine, Louis went with the big-inch Indian powerplant. “On the Chief it is part of a complete work of art,” Blanke says. “It deserved to play the starring role on a bike—an engine with very little motorcycle around it, and more power.” 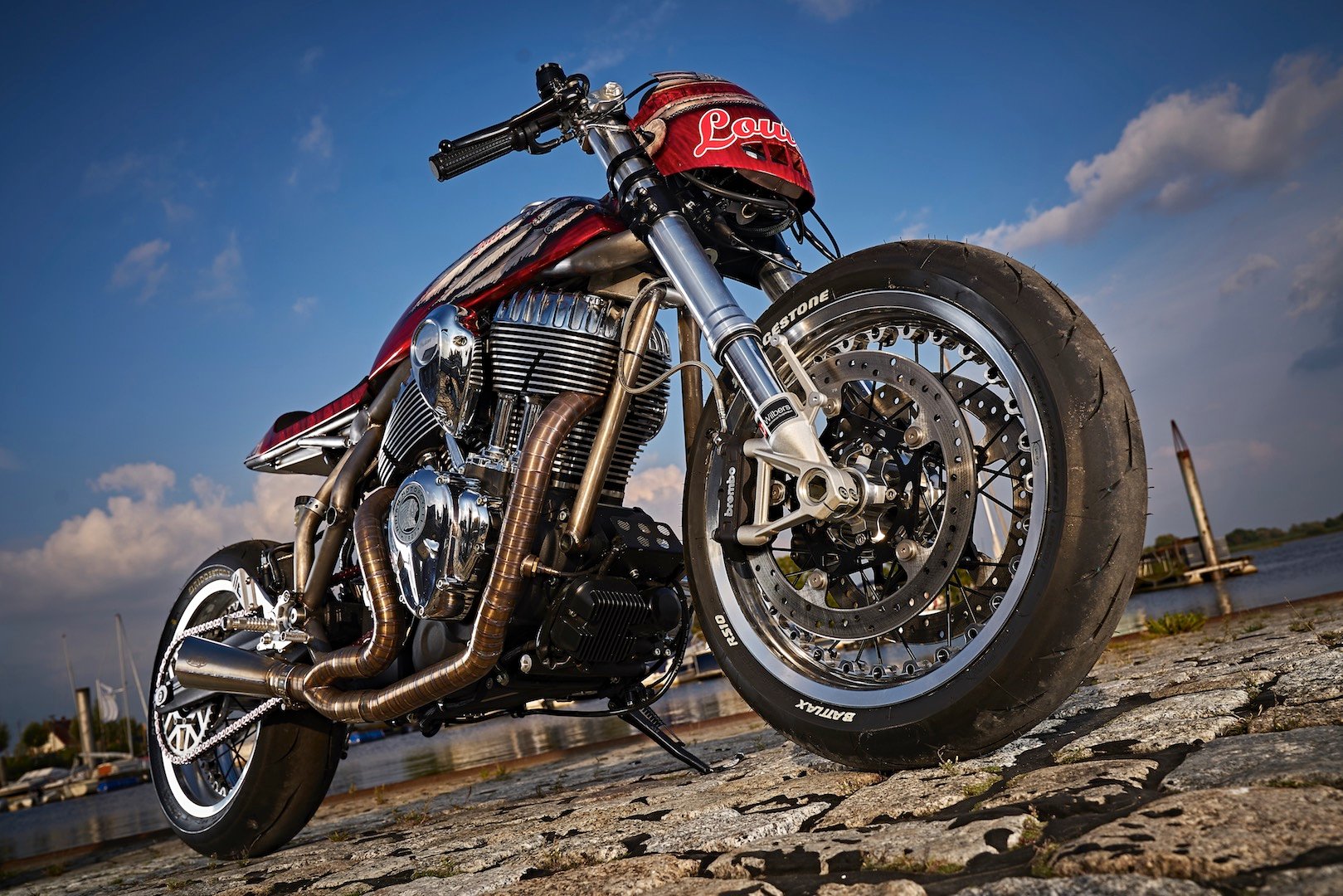 “This engine almost drove me crazy,” reveals Penner. “It is old fashioned like a Chevy V8—only a slice cut off—but the Bosch injection as a basic module allows the manufacturer to add sensors almost at will, and that’s what the designers of the engine did. By the time I had cleared all of the ECU, the engine was running decently with new camshafts, modified cylinder head, and fully open in- and out-take. I took nearly 200 runs on the test bench, but it was nice to see how Engina left the first race.”“My part was mask, tank, and bench, made of aluminum,” Naumann relates. “The only problem was that the fuel pump of the Chief is inserted from the top into the tank and it’s quite huge. I installed one from the Scout. It is much smaller and produces the same pressure.”When building a motorcycle that has to perform as well as look stunning, one might expect significant compromises to be made. Engina almost completely avoided that pitfall. “We could have build a shorter swingarm to get the bike more pretty,” Struckmann admits, “but for drag races the long one is the better solution.” 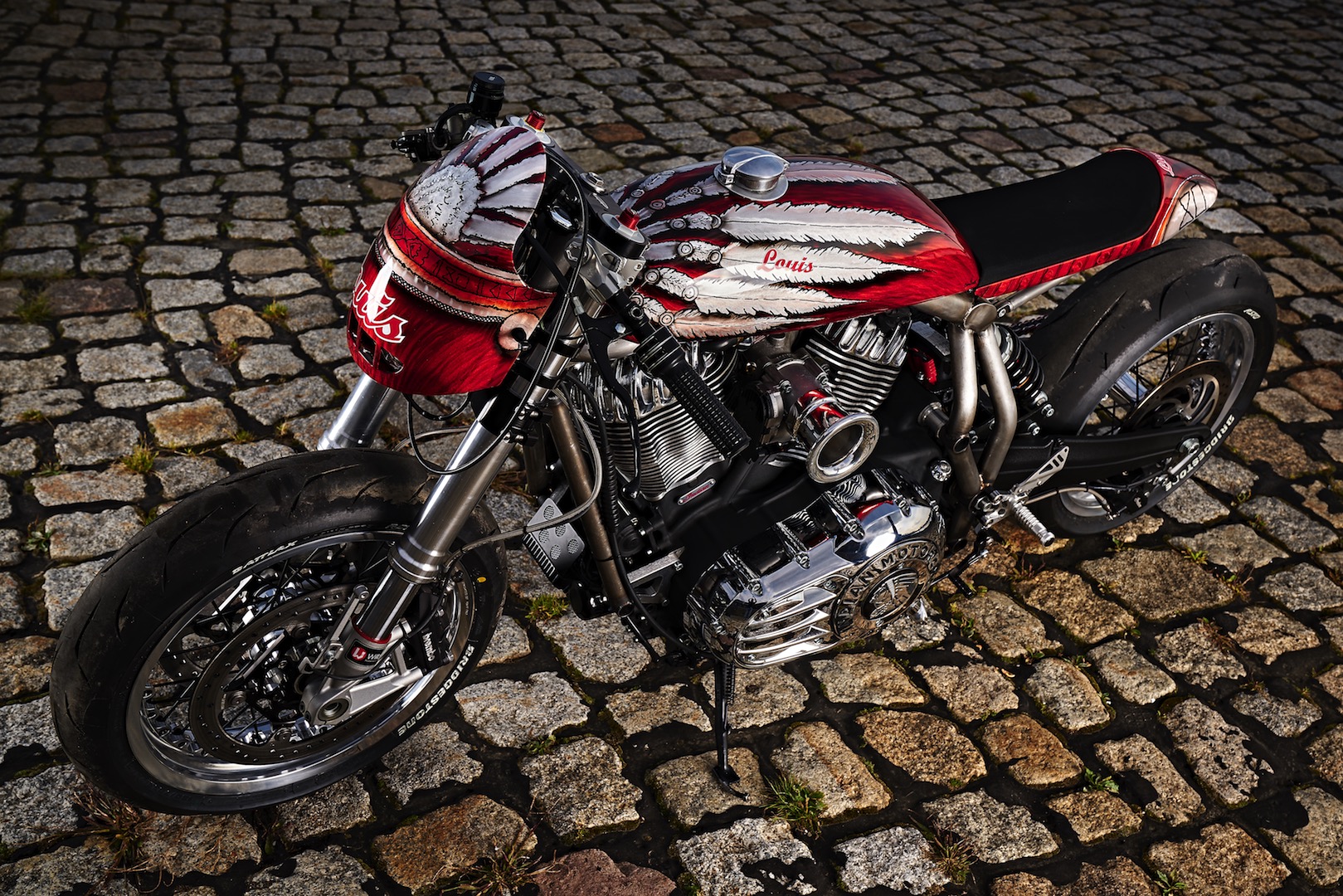 Stunt rider and model Mai-Lin Senf had the honor of riding Engina in anger at the Glemseck 101 Clash of Legends drag race held at the historic Solitudering street circuit outside of Stuttgart in southwest Germany. American Dan Gurney won a Formula 1 race there in a Porsche in 1962. Despite the custom heritage of Engina, Senf lived to tell the tale:“At the very first test ride, I pulled a 20-meter long black line onto the asphalt. Engina has more than enough power from idle. You gotta play carefully with clutch and throttle, otherwise you create burning rear rubber or a front wheel looking for the sun. The torque is almost scary.“The handling is much better than you expect with a look at the long wheelbase. Sam [Wasserman] took that into account when choosing the steering head angle. The bike is amazingly good in the corners and is absolutely stable. Because of the low-mounted engine for drag races, which is wide at the bottom, no extreme inclinations are possible. But for that, Engina was not built.“There’s not much left to say about the front-mounted Brembo radial brakes. They could probably also stop a freight train. In the race at the Glemseck, we even went without a rear brake because the adapter for the Kineo rims did not arrive on time. No problem. 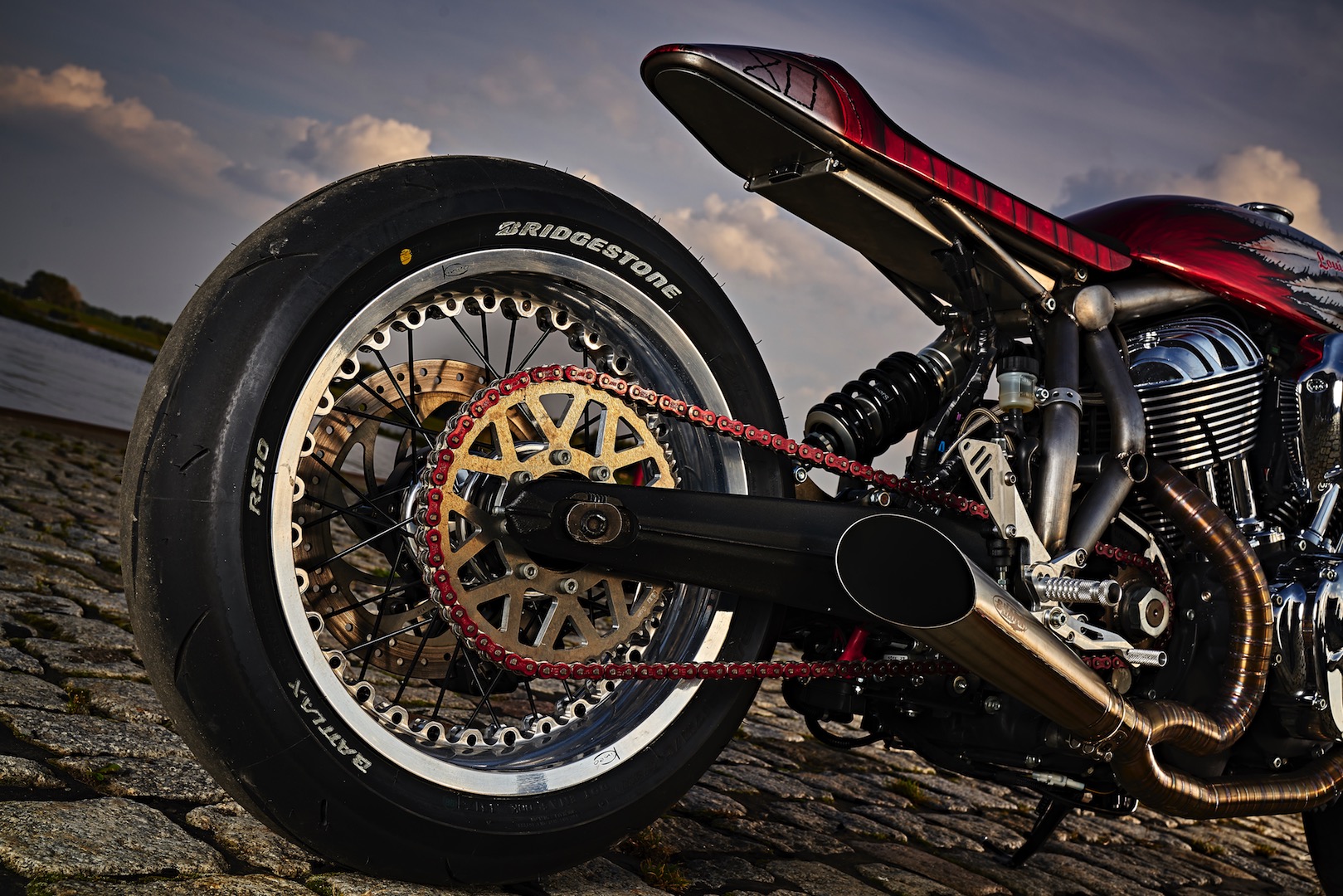 “What I love about the boys is that they always tailor the Louis bikes to me as a woman—not too large distances between the handlebars, footpegs, and seat, and a very narrow bench. The last thing a woman needs is a too-wide seat—then your thighs will not go down, but to the side. Then you have the bike, despite a low seat height, not really under full control—a thing that the manufacturers like to forget.”In addition to satisfying performance issues, there are the inevitable minutiae that must be attended to when creating a masterpiece. “The detailed solutions are the task of Detlef Stüdemann and me,” Struckmann says. “We have to make tens of components ‘invisible’ during the reconstruction. This is a challenge, but also a bit ungrateful. Nobody pays homage to things you do not see.”Future plans for Engina include a possible visit to the United States. “When I read the prompts on the Internet and social media channels,” Blanke says, “we should definitely do that. It would be a great honor to show the bike in the USA.“Meanwhile, we have several bikes that are requested from everywhere—worldwide, and also from the United States. That makes us a little proud and we hope that we will have the opportunity to visit you with the bike.”When we inquired regarding the final destination of the Louis Engina and whether it would be sold, Blanke curtly responded with a question: “Would you sell your children?”Photography by Volker Rost