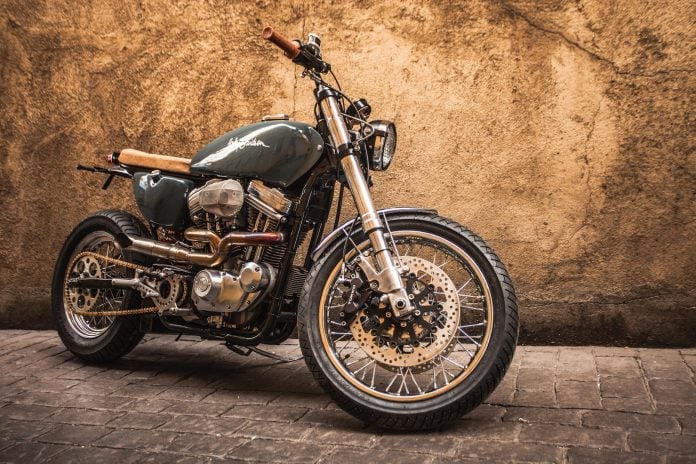 The Harley-Davidson Sportster is one of the most ubiquitous motorcycles in American two-wheeled culture. It has helped start the riding careers of countless motorcyclists, but where it has really taken hold is in the custom scene.Surely, every skilled artisan that has received accolades for bike-building prowess has tried a hand at the H-D’s iconic V-twin platform and cut teeth on the good ol’ Sporty. They are simple machines, plentiful and ripe for the picking; a couple minutes on your local Craigslist will have you shelling out a few hundred dollars for a ready-to-run Sportster and you’ll be well on your way to creating a custom bike of your own.It’s those exact qualities that have propelled the Sportster into the countless American garages, making it an unwavering fixture within the US custom community. 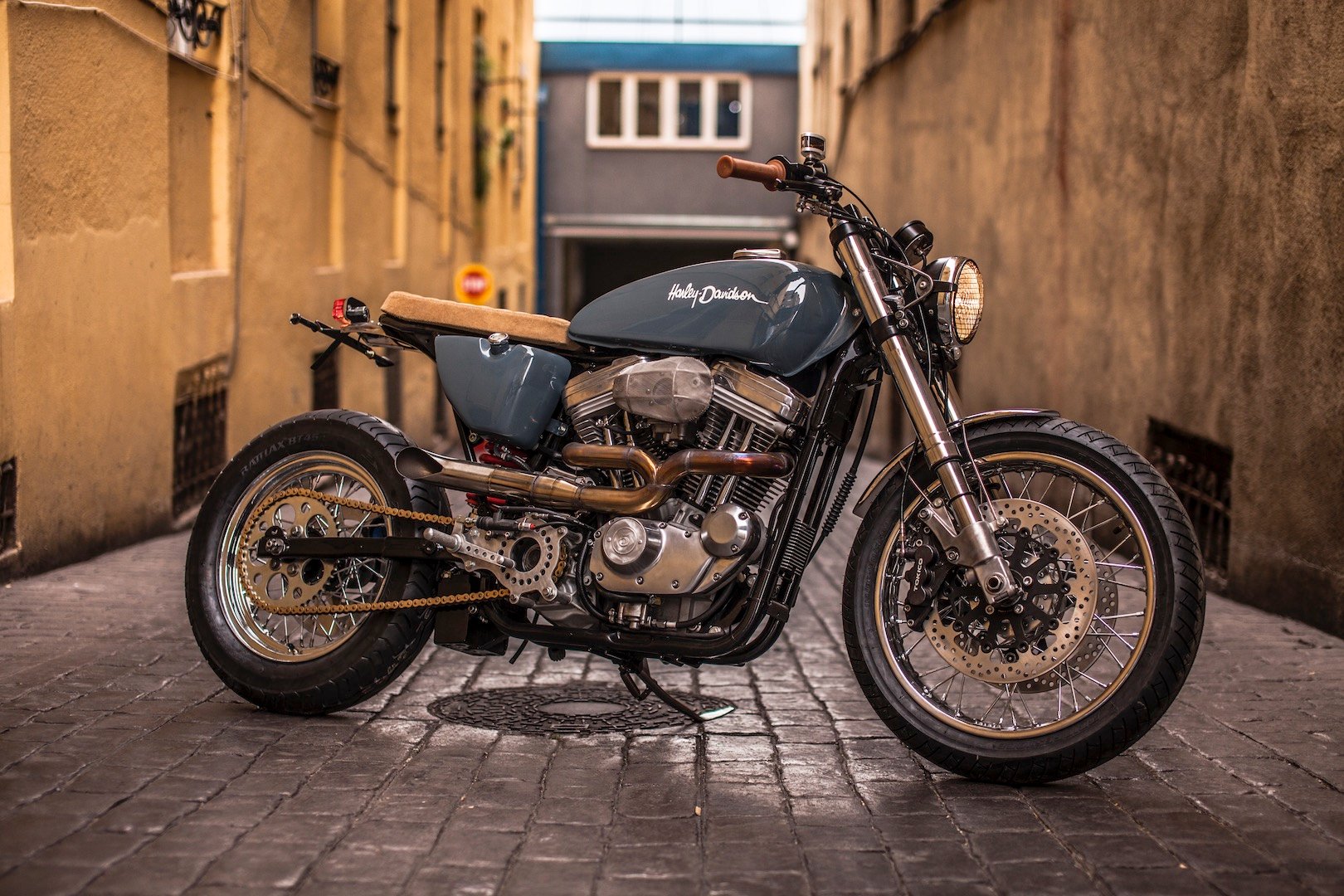 What we may take for granted or see as commonplace, Pepo Rosell of XTR Pepo, does not. The French-born, Madrid-based custom builder has created some of the most stunning bikes that we’ve seen—many of which happen to be of the L-twin variety.Harley-Davidson’s European presence is not as prevalent as it is in the US, in many ways; three, H-D is the exotic manufacturer. Stateside, it’s one of the most entrenched brands, just as apple pie à la mode is synonymous with American culture, so too, is the Sportster in American custom building.It shouldn’t come as a shock then that Rosell wanted to put a new spin on this time-honored piece of Americana. “The idea of the making this bike is to make the Sportster more European,” he explains, “with a real front suspension, with real brakes, and drop the weight to improve the handling.”A donor bike was procured in the form of a 1992 Harley-Davidson Sportster XLH883 in pristine running condition. While this Sporty retains its essence, it has gone through a series of crucial upgrades that certainly prove the versatility of this platform.The work began as it always does—stripping non-essential parts from the motorcycle and making way for the changes that are to be made. Rosell began his work by ditching the non-adjustable fork and opting for an inverted fork acquired from a 1992 Suzuki GSX-R750. 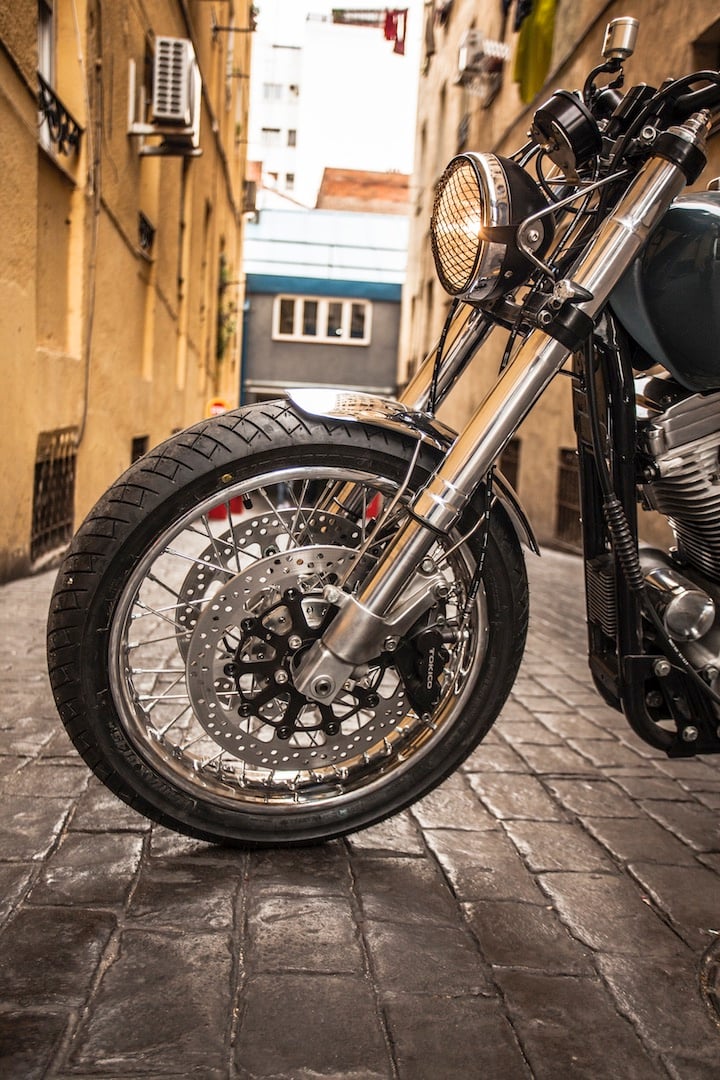 Though the GSX-R’s fork might be an elderly 26-year-old piece of kit, they still provide far more torsional stiffness than a standard Sportster fork of any era. Having gone through a full service, there is no doubt that they would be up to the task.With a big piece of the puzzle beginning to take shape, that sent Rosell down the rabbit hole further. He modified an 18-inch front wheel to accept this new front end that would facilitate a dual rotor set up. To do that, he tapped Barcelona’s NG Brake Disc for a fresh set of rotors that would be clamped down upon by the Suzuki’s Tokiko calipers. He finished it off with a Discacciati master cylinder, which should allow plenty of feel at the lever.From there, Rosell set his sights on something far bolder than what most custom builders will do—converting dual shock suspension design into a monoshock. That would require significant alteration to the frame, of course. Luckily, Pepo is no stranger to the welder.The subframe and swingarm were unceremoniously lopped off, only to make room for his custom rear suspension from Hagon Shocks on the outskirts of London. Rosell fabricated a new subframe and mounting system for the shock, as well as the utilitarian swingarm. Given the numerous positive impacts that a monoshock design has had on the new Harley-Davidson Softails, we can only imagine what these changes would do to a Sportster more than a quarter-century old.

Alas, the men who turn wrenches at XTR Pepo are true enthusiasts, and not ones to simply go in for a few bits of farkle and an eye-catching paintjob. They turned their attention to the 883’s powerplant.In stock form, the 883cc V-twin has plenty of power for new riders, as it has gotten many a newly minted rider into trouble. However, a big part of motorcycling is bragging to your friends about performance. To satiate that undeniable male need, they opted for the traditional 883 to 1200 conversion—quick, dirty and the most economically effective way to blow your hair back on a Sporty.More than that, they opted for high-compression pistons and ported the heads, allowing for even better performance. Coupled with a shiny new Mikuni carburetor and Screamin’ Eagle ECU, Rosell and his trusted crew will be able to eke out every bit of horsepower and torque that this V-twin has to offer, and they’ve done so without breaking the bank. The finishing touch is a custom, stainless steel exhaust, surely emitting a nod-inducing rumble.
When it was time to put some effort into revamping the Sportster’s appearance, they went to an unlikely source. You may notice the long, simple yet pleasing, fuel tank. Of course, that is something that many older riders are quite familiar with, as that fuel tank was sourced from a Yamaha SR500 and modified to fit. Other oddities of procurement come in the form of Triumph Legend TT side panels, which now conceal the Sportster’s oil tank.Sitting behind the long, wide bars of the XTR Pepo Sportster must be something of a revelation for anyone intimate familiar with the model—the seating position has been modified with a long, flat, washboard style seat. Even more dramatic are the rear sets, which have been moved back into a more athletic position. 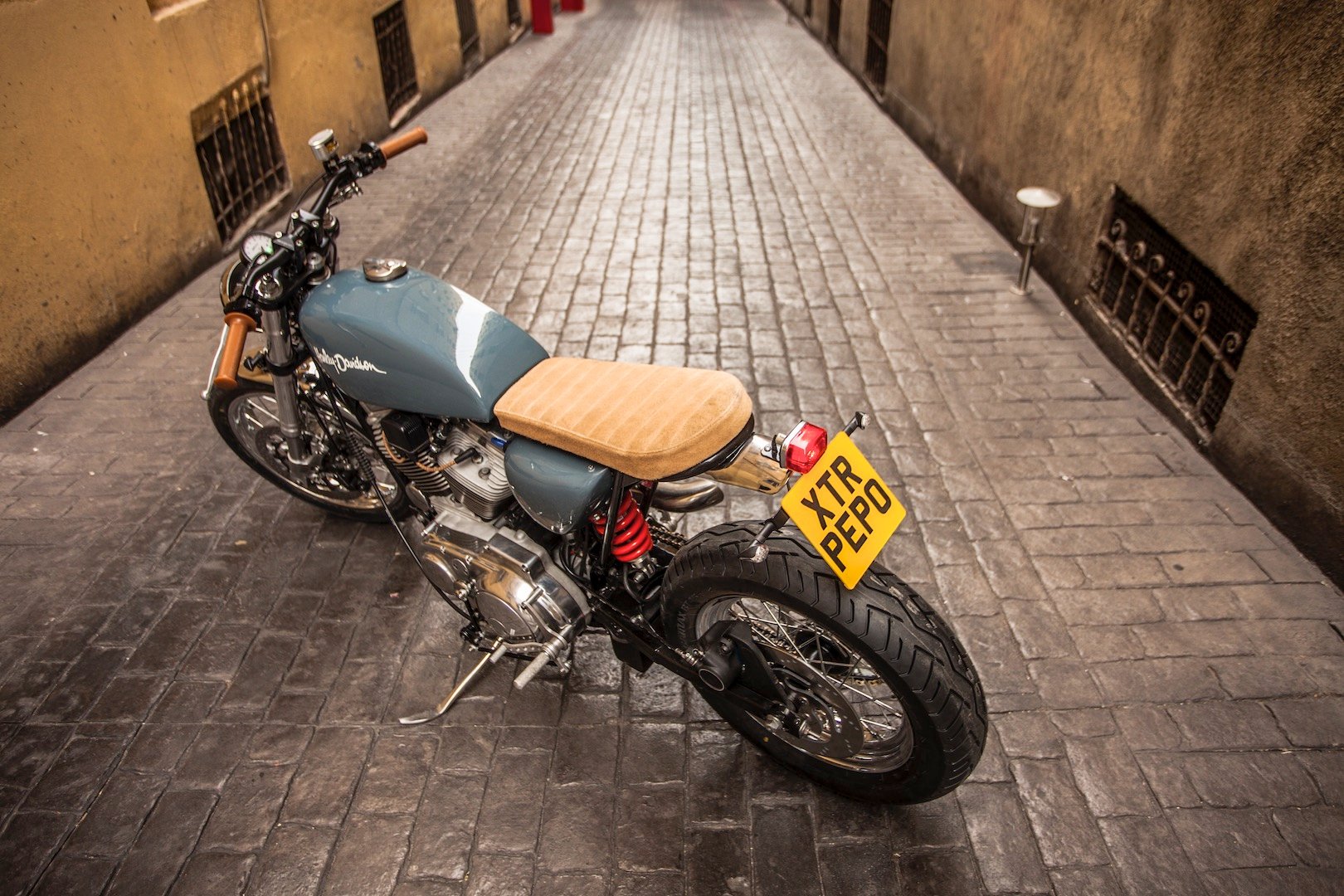 The beautifully subtle blue paint scheme was chosen by the customer, and one of the few aspects of this build that wasn’t handled in-house. For that, he approached local legend Artenruta, a company that has done more than a few stellar paintjobs on motorcycles and bicycles over the years.Pepo Rosell is in a tough spot with this build. Taking a swing at something American motorcyclists have claimed as definitively our own is precarious—you’re going up against decades of established craft. There is always room in the custom world, but we’d gather there won’t be too many noses raised at the XTR Pepo 1992 Harley-Davidson Sportster XLH883, which if anything proved that the Sportster truly is one of the most effective custom platforms around.