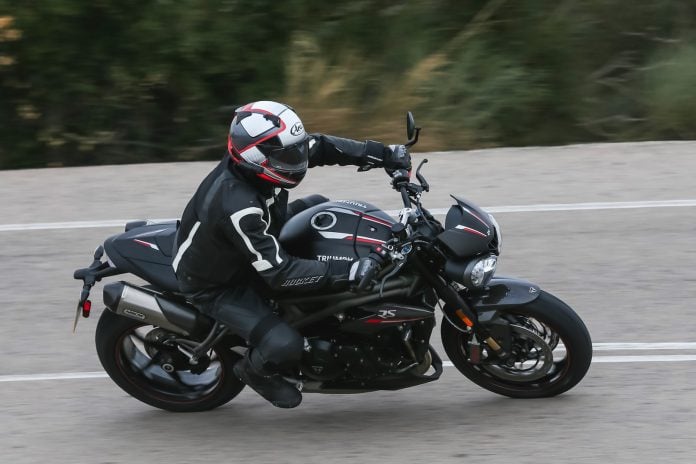 Upon its introduction in 1994, the Triumph Speed Triple defined the hooligan genre with a rambunctious motor and aggressive handling. The Speed Triple has evolved over the years, becoming more of a gentleman’s upright naked sporting motorcycle than a pavement-rippling bruiser.For 2018, Triumph has cleverly boosted both the hooligan cred and gentlemanly stature of the Speed Triple. I took to Circuito de Almería and the incredible nearby Sierra de los Filabres mountain roads to discover what the 2018 Triumph Speed Triple is all about, as the sun, rain, and sleet poured down on me. 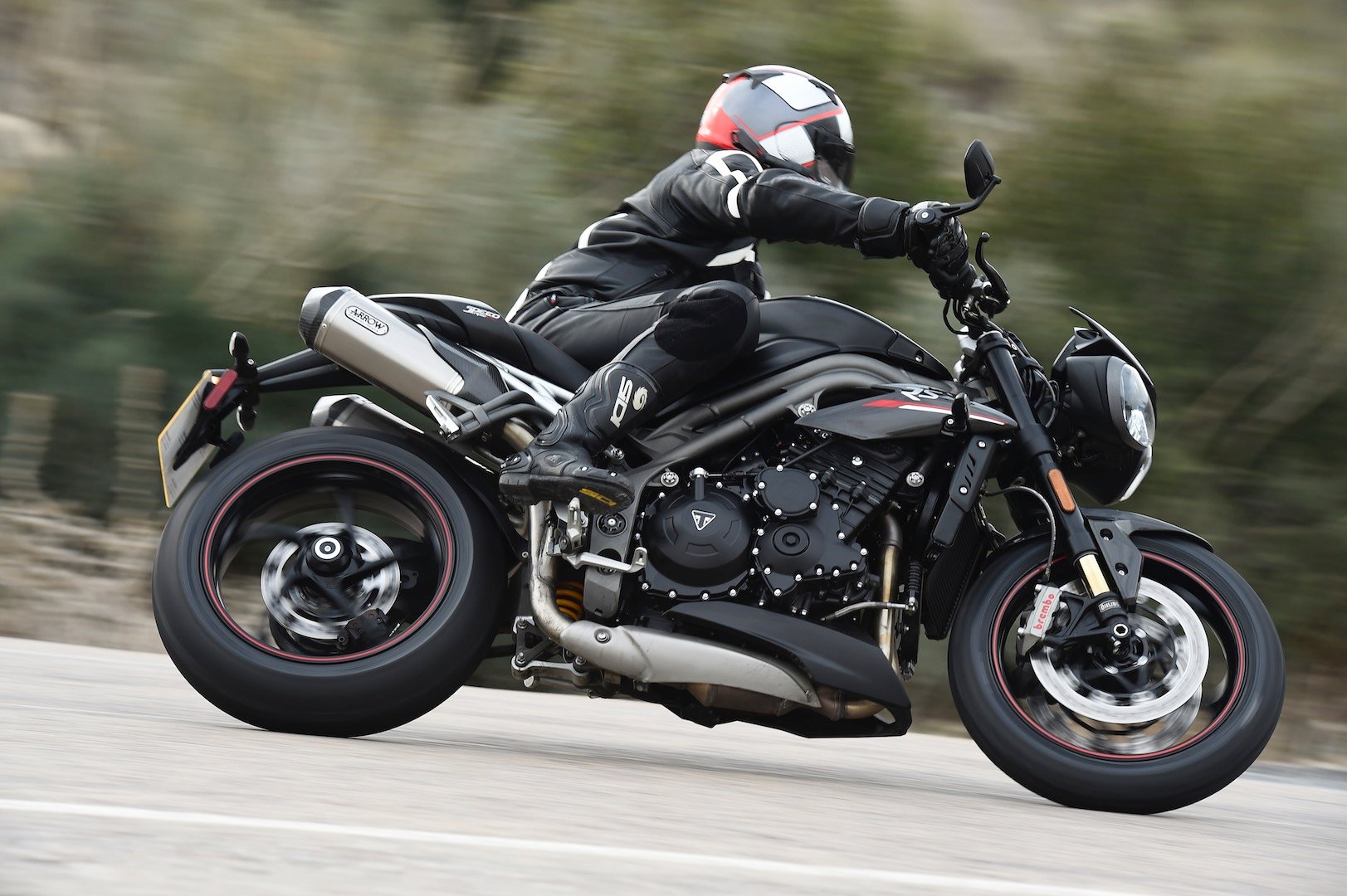 1. There are two flavors of the 2018 Triumph Speed Triple. There is the standard S version with Showa suspension and limited electronics. I tested the Speed Triple RS, which features Öhlins suspension and an inertial measurement unit (IMU) that allows for a higher spec electronics package. We have a full rundown of the Speed Triple RS and S differences here, but the frame, motor, and wheels are common to both motorcycles.2. To please the hooligan crowd, the Speed Triple gets a truly upgraded powerplant. Although not entirely new—the displacement of 1050cc is unchanged—there are over 100 new parts that all incrementally conspire to increase performance. Big changes include a beefed up compression ratio via new pistons, higher lift cams, and a new sump design with less drag.3. Triumph claims an increase in horsepower and torque from 4750 rpm to the new redline at 10,500–a cool thousand higher than last year. Peak horsepower is now at 150, up seven percent, and it comes at the redline. Torque output is improved from 4500 rpm on up, with the peak coming at 7150 rpm. To be sure, when you get on the gas, the 2018 Triumph Speed Triple is the most aggressive motor in the line’s history. 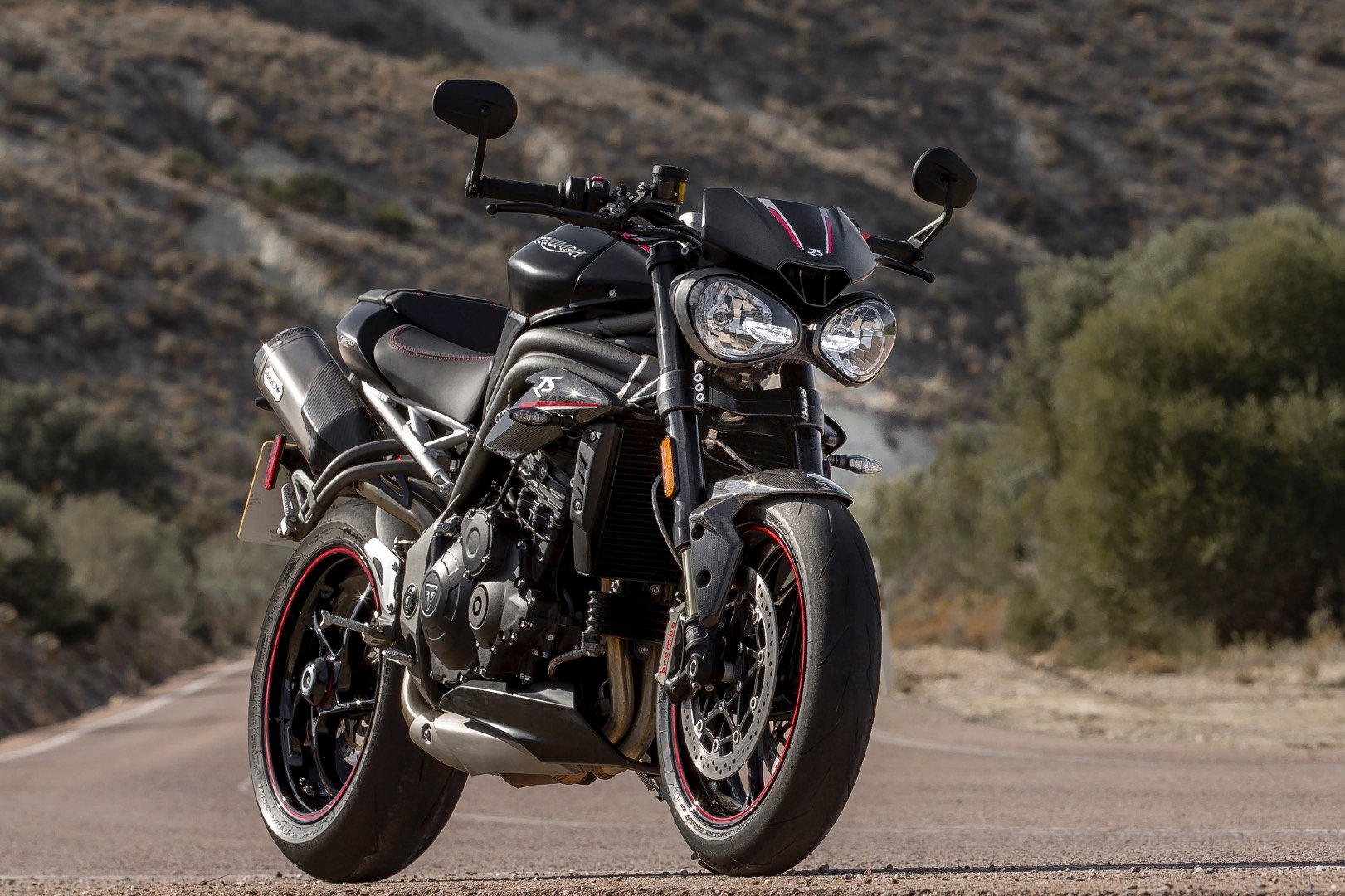 4. The Triumph doesn’t have the blistering horsepower of the Aprilia Tuono 1100’s V-4 or the pounding V-twin torque of the KTM 1290 Super Duke R, yet the unique power delivery of the Triple makes it something special. Plentiful torque makes it easy to loft the front wheel hooligan-style out of almost any corner in virtually any of its six gears. If you decide to let it loose, you’ll find plentiful head room before the rev limiter kicks in softly. The howl of the RS-exclusive Arrow brushed titanium mufflers certainly encourages aggressive throttling.5. The quickshifter is a marvel. Whether up- or down-shifting, the RS quickshifter works transparently. The harder you are riding, the better it performs. Only once did it catch me off-guard—I lazily upshifted early in a roundabout and the motorcycle lurched. I’ll take the blame for that one, as the unit otherwise behaved flawlessly.6. Electronics make it possible to easily personalize the power. Thanks to a beautiful full color TFT, a dedicated mode button (use your left index finger), and a five-way joystick (left thumb), choosing one of four primary modes can be accomplished in seconds. In addition to Rain, Road, and Sport, there is a fully user configurable Rider mode and a special-use RS-only Track mode. Each mode has its own throttle response profile, traction control level, and dash display. It is impressive in concept and flawless in execution. Keep in mind that both the ABS and traction control are corner-aware due to the IMU. 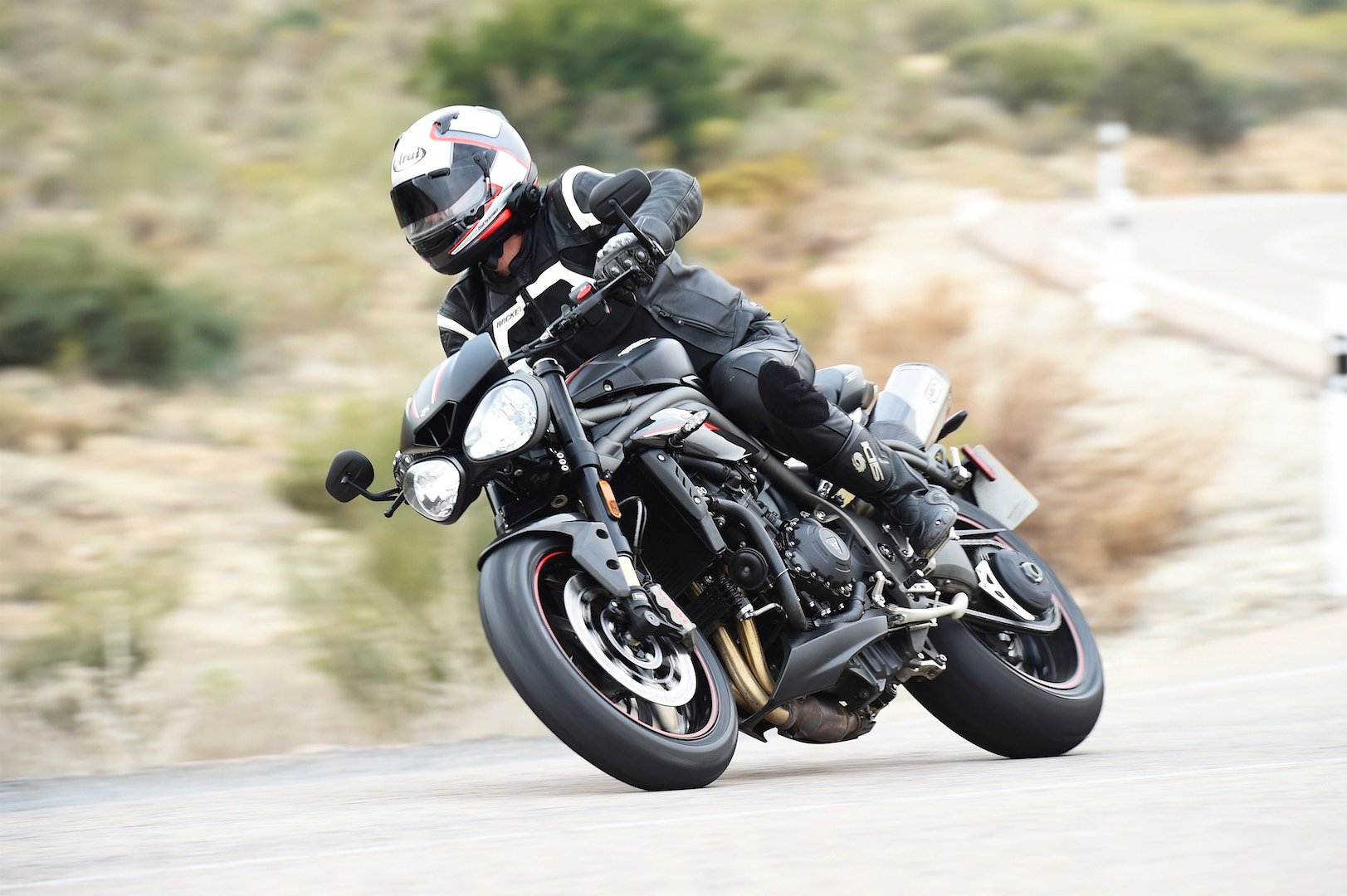 7. The Sport mode makes for a controllable but aggressive ride. When traction is ideal, the Sport mode lets you hang it out with abandon. The throttle has a direct feel without a hint of notchiness—fueling is spot on. You can loft the front end at the twist of the wrist, so it is important to be mindful of the 150 horses. It’s not likely to bite you, but with the top end power, you can overshoot braking points as you ride farther from perfection. On the smoothly paved, lightly trafficked Spanish backroads, it is revelatory.8. For a fast-not-furious ride, the Road mode is the way to go. Full power remains at your disposal, though the power comes on more gently. I like riding at a smooth yet rapid pace, and the Road mode delivers that experience. Road mode is the gentlemanly answer to the hooligan Sport mode. Road is more forgiving, and you might find it faster on unfamiliar roads, as you’ll make fewer mistakes that are more easily corrected.9. Riding in rain and sleet is a great way to test the Rain mode, and I found out just how well it works. With the power tamped down and the traction control at its most intrusive, it was impossible to get the rear wheel to misbehave. Wicking the throttle to its stop resulted in impressive acceleration in the wet, rather than a wandering rear tire—even with the Pirelli Diablo Supercorsa SP tires that come with the Speed Triple (and the Ducati 1299 Panigale). You have to keep tabs on the front wheel—you can still lose it—but on a slick road the electronics are highly effective. 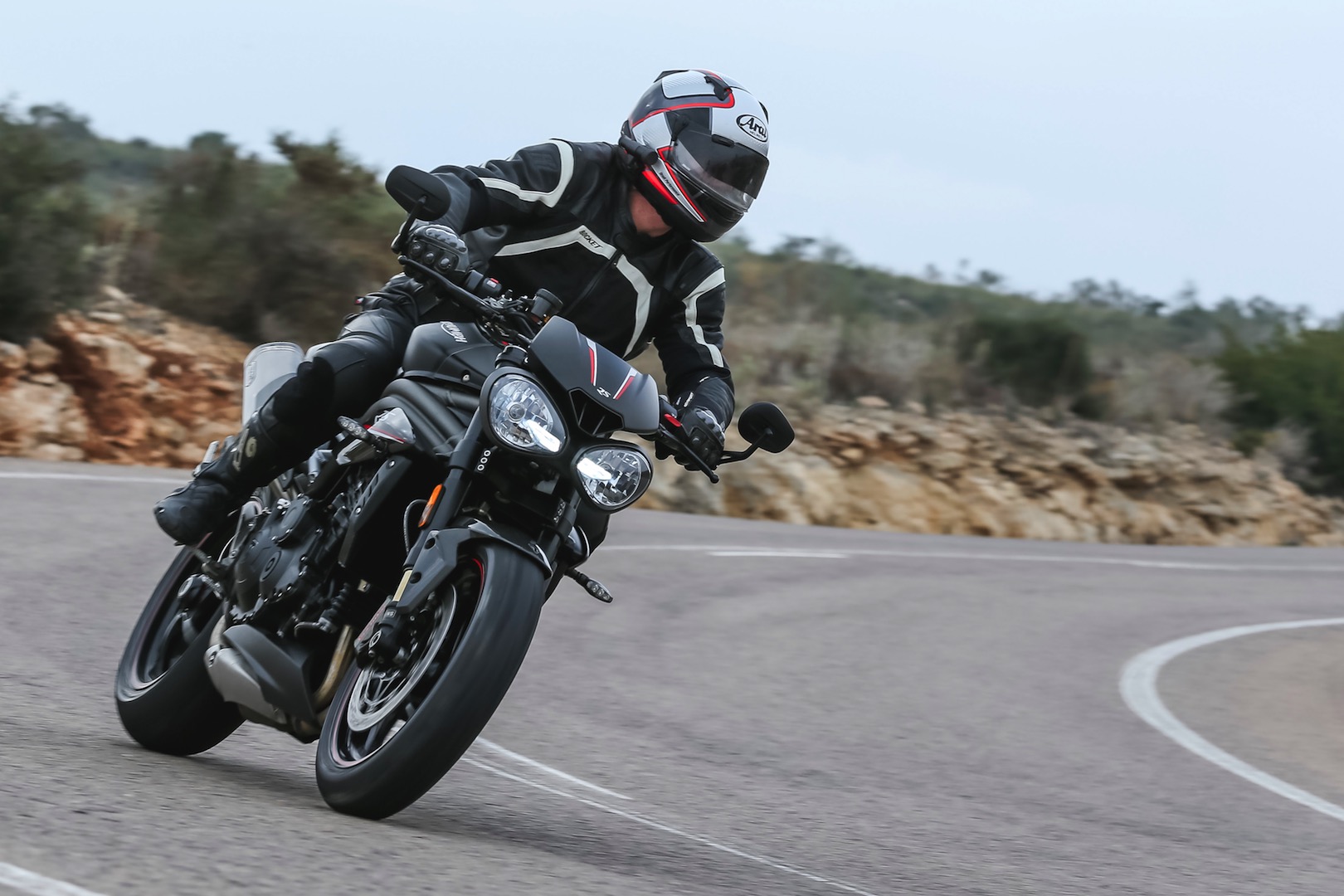 10. There is also a fully user configurable mode and a Track mode. The personalized Rider mode gives you the choices of the setting from each of the other modes, including disabling traction control and ABS for maximum hooliganism. The Track mode uses the Sport power delivery with TC and ABS optimized for a fully dry circuit, which I did not to experience get due to weather.11. During my abbreviated time on the Circuito de Almería, conditions were mixed on the track. A track test rider recommended Road mode, and I took that advice. That didn’t mean the track time wasn’t enjoyably illuminating. I managed to consistently light up the rear tire exiting the chicane, and soon after hit 220 on the main straight—km/h, naturally. All the while the Speed Triple was composed and predictable. The quickshifter improves acceleration, while the Brembos are a joy when slowing down—along with the quickshifter and slipper clutch. Yes, I would have liked to exploit the Track mode on race tires, but the heavens had other plans.12. Almería’s mountain roads can be unforgiving, so it was a great help that the 2018 Speed Triple RS inspires confidence. With fast switchbacks on roads that feature a rock face on one side and a barely protected cliff on the other, you do not want a motorcycle that will spit you off unceremoniously. The Speed Triple has impressive stability matched with a steep rake under 23 degrees. This allows you to pull off premeditated direction changes persuasively. Certainly, the cornering ABS and traction control are nice to have in your back pocket. Owners will be well advised to take maximum advantage of the customizable Rider mode to match local roads and personal riding style. 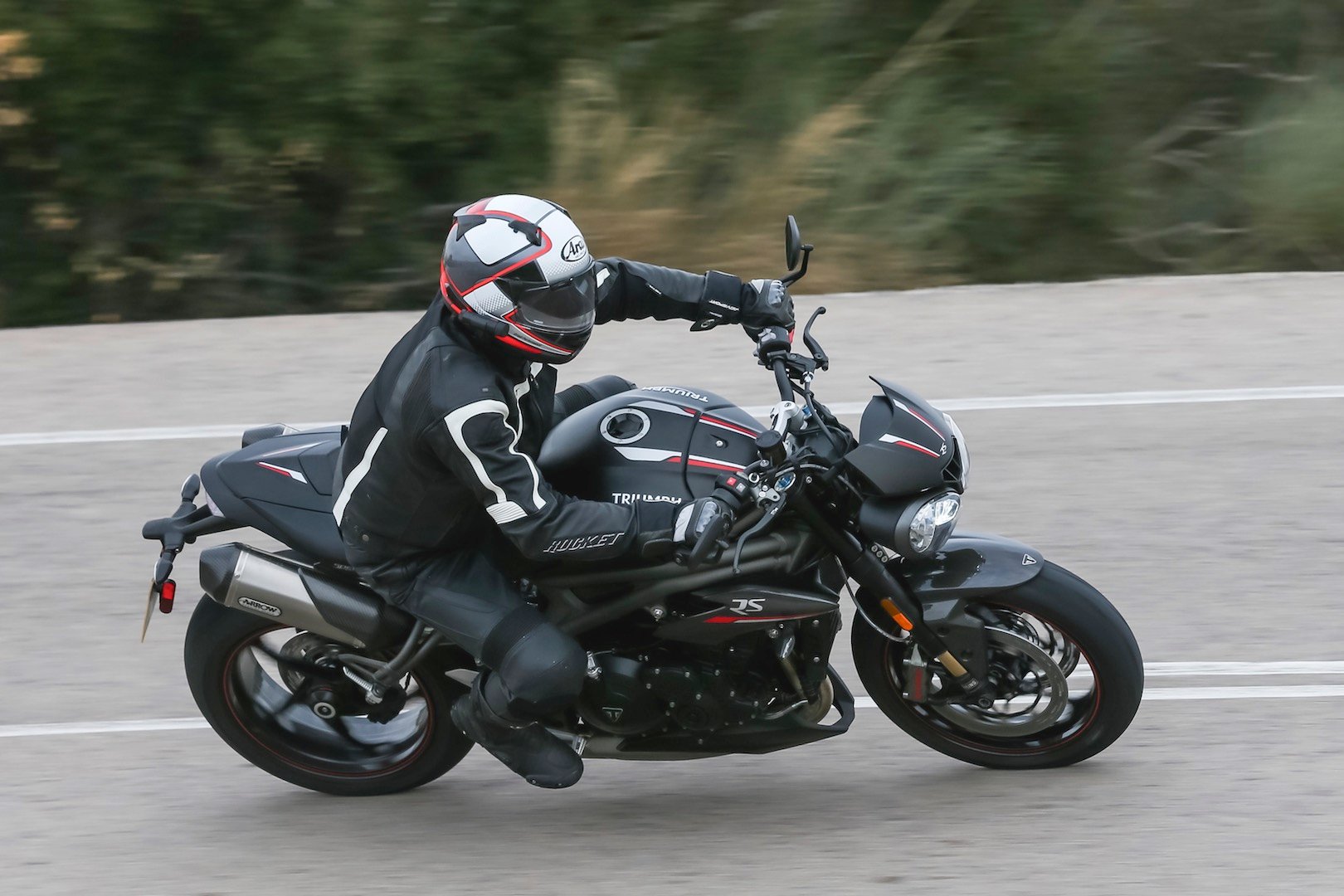 13. The beefy Brembos and 320mm discs, plus an adjustable-ratio lever, make for a formidable braking team. With a welcoming soft initial bite that quickly transforms into a highly progressive actuation, the Speed Triple’s front brakes are the best of both worlds in the standard setting. Adjust the Brembo master cylinder ratio at the lever and increase or decrease that progression to taste—the system mimics the changing of the master cylinder piston diameter. The rear Nissin brake is a disappointment—not much feel or deceleration before the ABS steps in.14. On both the street and track, the chassis is impressively composed. In addition to getting the geometry right, with a great balance between stability and agility, the Öhlins suspension keeps the Speed Triple on a highly predictable even keel. For riders who operate at the edges, the 43mm Öhlins NIX30 inverted fork and TTX36 shock can be fine tuned to a racer’s edge.15. There are creature comforts that will appeal to the gentleman’s side of any hooligan. In addition to a USB charging port, cruise control, a comfort seat (with an optional low seat), and carbon fiber bits on the RS, Triumph has a nice line of new apparel led by new riding jeans and urbane lace-up boots.16. A hooligan with the heart of a gentleman, the 2018 Triumph Speed Triple RS proudly continues a vital family line. In a world of open class V-4s, V-twins, and inline-4s, the three-cylinder Speed Triple RS establishes its territory with a unique performance, a one of a kind sound, and a pedigree of sophisticated pugilism.Photography by Kingdom CreativeRIDING STYLE