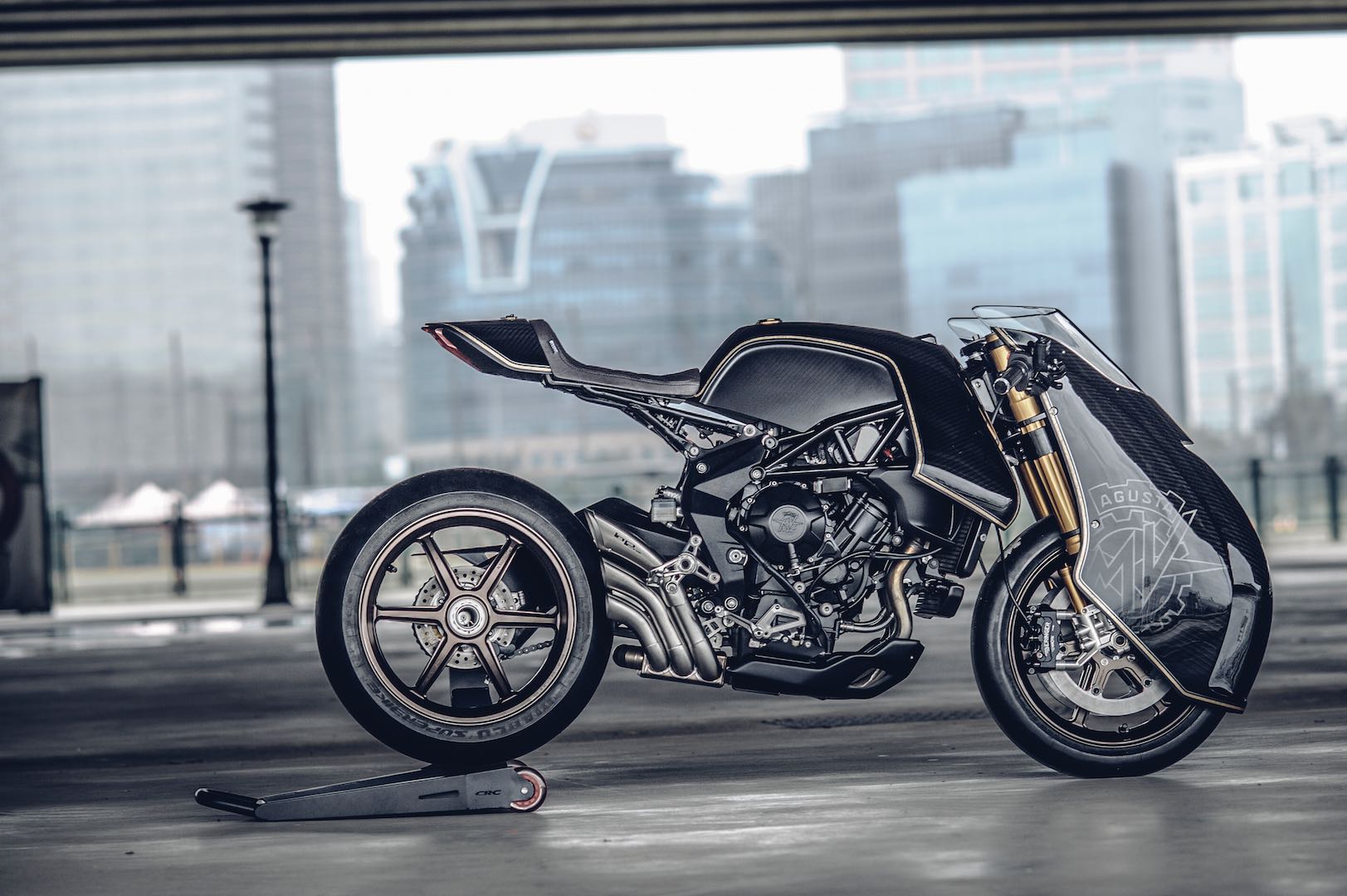 During the Moto Bike Expo in Verona last week, MV Agusta did more than display its factory motorcycles. The Varese-based manufacturer also brought along two custom nakeds built on the Brutale platform: the Brutale 800 RR “Ballistic Trident” and the Dragster Blackout.The unique designs of each model display the best in custom Italian motorcycle culture, bringing additional appeal to already appealing motorcycles.[Visit our Custom Motorcycles Page]“MV Agusta is known world-wide as a manufacturer of motorcycle art,” says Giovanni Castiglioni, CEO of MV Agusta. “It’s very pleasing to me to see that our brand has such a broad appeal that it has been used as a base by such renowned customizers as Walt Siegl, Zagato, Deus Ex Machina and Officine GP Design, just to name a few. I personally really like the Dragster custom designed and built by my friend Valter, it’s a bike that gives me a lot of ideas…”Following is info on both the Brutale 800 RR Ballistic Trident and Dragster Blackout, and a photo gallery.

MV Agusta Dragster Blackout is a collaboration between the Varese factory and Valter Moto Components, a manufacturer of high-end accessories specializing in racing components and official partner to the MV Agusta Reparto Corse racing team, with contributions from Tecnoart Sersan, creator of the graphic design and paintwork.The base of the MV Agusta Brutale Dragster Blackout is a MV Agusta Dragster that Valter Esposito, founder of the company and creator of the concept, wanted to transform into a “techno-café racer” inspired by the world of motorcycle racing and car tuning. With reference to the past, the design is characterized by the new handlebars, and a front LED illumination activated through the side mounted switches arranged in such a way as to create a new design element.The Blackout “wears” Valter Moto Components’ parts (‘clip-on’ racing handlebars, foot- pegs, levers, oil tanks, fuel filler cap, number plate hanger and the indicators); combined with these beautifully crafted components has been added a circular seven inch full led headlight with a new aluminum trim with an integrated, low mounted dashboard. A fork mounted, full-color 4.3-inch HD screen for rear vision, entrusted to an integrated water- proof camera flanked by indicators under the tail, guarantees a wide range of visibility (170 degrees).The detailed craftsmanship such as the milled by hand MV logo on the casings should not go unobserved. The graphics are the work of William Melzi of Tecnoart, further defines the concept of “motion-switch” with a texture from the steampunk style on the tank and a name “Blackout,” which closes the circle on the identity of the project. The exhaust is signed SC-Project: it is the S1, utilized on Leon Camier’s racing F4 in the SBK championship.

The Brutale 800 RR “Ballistic Trident” was presented December at the Hot Rod Custom Show in Yokohama and has achieved International acclaim, thanks to viral success of the public and of the most influential blogs in the industry.The Ballistic Trident project, commissioned by MV Agusta Taiwan to Winston Yeh, founder of Rough Crafts, workshop with headquarters in Taipei, pays tribute to the first supersports of the last century MotoGP, characterized by streamlined ‘dustbin’ fairings, a stylistic feature that the Taiwanese designers wanted to reinterpret on this incredible “canvas.”