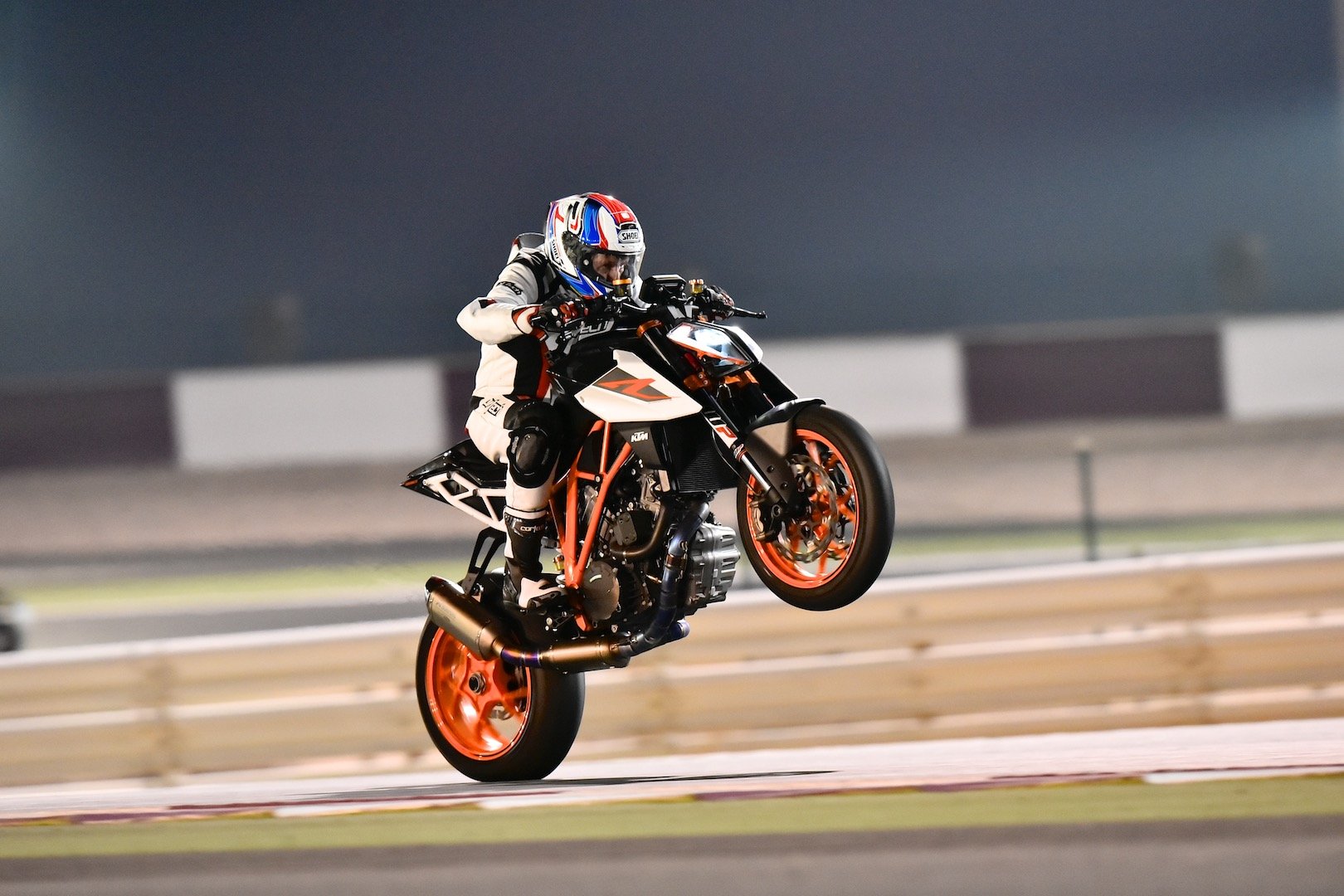 KTM’s tagline of “Ready To Race” is not just PR hype—KTM is the most committed manufacturer to Dorna’s MotoGP series. In 2017, the Austrian manufacturer begins a five-year contract to contest the premier class, and the Red Bull KTM Ajo Motorsport team will compete in Moto2 and Moto3. Also, for years KTM has provided the 250cc bikes for the Red Bull MotoGP Rookies Cup feeder series.An all-new racing department headquarters in Austria is already home to some 400 employees, and it will be complemented by the brand new headquarters in Mattighofen due to open in 2018. KTM is now producing over 200,000 motorcycles a year and they sell all of them, with several models quite difficult to find. To say the company is on a roll would be a bit of an understatement.[2017 Motorcycle First Looks]The very first Super Duke debuted in 2005 with the 990, and since then it has only got better. The current model and benchmark upright/naked 1290 Super Duke R, took the world by storm in 2014 and became an instant icon.Nicknamed “The Beast” by the factory, the prodigiously powerful Super Duke R was paradoxically, also beautifully tame and easy to ride, especially at modest speeds. The new Super Duke R—nicknamed “The Beast 2.0” by KTM—sees several changes that take the machine to the next level.

The now Euro-4 compliant LC8 motor in the SDR is already an awesome piece of engineering. With a slightly higher compression ratio—from 13.2 to 13.6:1—it increases its claimed power output by four horsepower to 177. Its prodigious torque output of 104 ft/lbs explains the 1290’s alacrity coming out of slow corners no matter which gear you’re in.Perhaps more interestingly, the mildly heavier, but more balanced crankshaft, plus 19-grams lighter titanium inlet valves, 10mm shorter inlet funnels, and an exhaust resonator, give an additional 500 revs before redline. These changes effectively broaden and smooth the mid-range power curve.Riding at very modest speeds around The Pearl-Qatar—an artificial island in the Persian Gulf—the motor was smoother and felt as though it spun up a little quicker than previously. Exiting Losail International Circuit’s slower corners in third gear, it was astonishing how quickly the motor picked up, and how smoothly and strongly the low-down power flooded in; it felt like I could leave the bike in one gear the entire lap.Although the Super Duke R’s forte has always been its great handling, the brilliant WP suspension has been revised slightly to broaden the bike’s capability. New fork damping internals and an increased spring rate, as well as a revised rear shock, make the ride more comfortable on the street and more responsive on track.I haven’t ridden the previous model at Losail, but when I explored the handling of the new Super Duke R, I found it felt very neutral on turn-in, mid-corner stability was excellent, and on aggressive corner exits the SDR stayed planted, even with the rear tire sliding out slightly through the long, hard-accelerating Turn 11.Losail’s Turn 11 is fairly unique, and it requires going up through two gears while leaned over, and hard on the throttle well into triple-digit speed. I did have some headshake at each upshift, though once I relaxed a little and put less input into the bars it almost went away. This indicates that it was mostly my fault, and not the bike. Incidentally, the SDR does have a non-adjustable WP steering damper tucked under the lower triple clamp.The six-speed gearbox is still the same exemplary Super Duke R, and goes unchanged. Sixth gear is unnecessary on the street, as the spread of power is so broad and strong low-down that you have to be doing well over 80 mph in top gear in order to avoid lugging the motor. Sport-touring riders will appreciate the new cruise control, tire pressure monitoring system, and Bluetooth connectivity on the bike, as well as the gorgeous new TFT color display instrument pod that is super-easy to read and now position-adjustable.

The most significant change is to the electronics suite. Although the standard bike’s price is unchanged at $17,999, you will probably want to add the two optional software packages—the Performance Pack and the Track Pack. Pricing is to be announced, but expect them to be around $400 each. Both packs supplement the standard rider aids that include the three riding modes—Sport, Street, and Rain. They change the power output and level of traction control, while cornering ABS modulates braking appropriately based on lean angle.The Performance Pack adds a much-needed quickshifter and it includes a flawless blip-downshifter, as well as a back-torque limiter—an additional electronic rear wheel slip control that supplements the mechanical slipper clutch.Also included in this pack is KTM My Ride, which adds Bluetooth connectivity with your smartphone, including the ability to show incoming calls and audio player info, and a handlebar switch to control these functions.The Track Pack is a software upgrade to the ECU that can be done at the dealer. It adds a Track mode to the three standard modes, and it separates out the power and traction control functions.Traction control is broken down into nine levels that can be changed on the fly. They are so transparent and precise, that I spent most of my time at Level 5 riding around the Losail Circuit, as opposed to my more usual Level 2 or 3 on other brand machines.Throttle sensitivity can also be adjusted between three levels of aggression, although I found the fueling so smooth and accurate that I only rode it in the Track setting, which is the most aggressive. Track mode also has Launch mode, which allows for three starts before disengaging. The revs are held at 6500 rpm with a wide-open throttle, so the rider only has to modulate the clutch at take-off. Anti-wheelie can also be turned off, allowing the traction control alone to help mitigate wheelies. I loved that.

Braking is from the ubiquitous Brembo M-50 Monoblock calipers biting down on to 320mm rotors. The brakes were, of course, excellent with tons of feel and the ability to bring the 1290 Super Duke R down from high speed without drama.The excellent Metzeler Sportec M7 RR tires have replaced the previous Dunlop SportSmart 2 rubber. Although both of the Metzeler carcasses can squirm a little at high track speeds, the grip and feedback are excellent. Also, from previous experience with the Metzeler tires I know they last exceptionally well.I had one session on the KTM racebike at Losail, and that was equipped with Dunlop N-Tec racing slicks. The difference was absolutely phenomenal, with the Dunlops giving me incredible grip and ideal feel.The N-Tec tires had complete stability, and that was especially noticeable when hard trail-braking into the final Turn 16. The legendary Dunlop predictability was awesome, and when accelerating out of Turn 10 through the long left sweeper of Turn 11, I could feel the rear pushing out slightly as the SDR gained speed; I never felt out of control or in any danger.

Overall, the ergonomics have been changed a little on the 2017 Super Duke R. The ¾-inch wider handlebar is also 0.2-inches lower and pushed forward nearly three-quarters of an inch; the result is a slightly more aggressive riding stance.It’s the extra handlebar width that is most noticeable, and I had to be careful not to put too much input into the bars and upset the handling. Additionally, the handlebar has lots of adjustment in all directions, so it allows for a wide range of personalization.The riding position is very comfortable, even though it is somewhat aggressive. I was pleased to discover that even at over 160 mph on the straight at Losail, I could tuck in and the windblast was much less than I had expected. Credit that to the large, aggressive-looking LED headlight and the angle-adjustable instrument pod.Both the clutch and brake levers are adjustable, too. Also, the pegs and foot lever placing can be changed via three different step plate positions.The KTM PowerParts catalog rearset footpegs on the racebike were an improvement at Losail, as with the standard setup I was touching hardware and my feet on some corners, although it was never a big problem.The standard positions are ideal for the street, and in reality the footpegs are a terrific compromise between comfort and ground clearance when leaned over.It is impossible to find a downside to the 2017 KTM 1290 Super Duke R. Although enormously powerful, it is also extremely docile and easy to ride around town. The tweaks and changes to the bike have been well thought out. For those who ride track, the electronics and quickshifter—especially the blip-downshifter with the back-torque limiting function—make a major difference to both overall speed and safety.Add in that aggressive looking, super-sexy LED front light coupled with the reduced rear bodywork that exposes the cool trellis subframe, and KTM once again has a winner—and no doubt huge demand for this amazing motorcycle.Riding Style