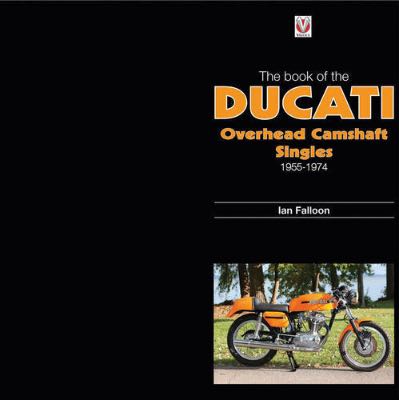 With an MSRP of $100 U.S. ($120 in Canada) you’d be perfectly justified in saying, “That book better be damn good.”Well, it is.The quality of the book itself from binding to hard cover, to design to the glossy heavy stock it’s printed on is top notch, library quality.But, of course, it is the content that the book’s value must be measured on. There, Veloce Publishing, Ltd. went to one of the foremost go-to guys in the industry for authoritative motorcycle history and technical data: Ian Falloon.

Falloon has authored twenty books about motorcycles, 10 of which are on Ducati. You may recall our review of some of his other works, such as The Complete Book of BMW Motorcycles or The Essential Buyer’s Guide Moto Guzzi 2-Valve Big Twins or The Complete Book of Classic and Modern Triumph Motorcycles-1937-Today .In The Book of Ducati Overhead Camshaft Singles 1955-1974, Falloon takes us deep into the history of an historic engine design: Fabio Taglioni’s gear-driven camshaft OHC single, which was developed in 1954. It is important to note, as Falloon points out in his introduction, that the book is not a shop manual, though it is potentially useful to mechanics and restorers as an additional resource due to its technical specifications, illustrations and rich detail.The book traces the impact and evolution of Taglioni’s work that started with the Gran Sport (Marianna) race bike in 1954. Featuring a drive shaft with bevel gear at the top to drive a single overhead camshaft instead of the more common cam chain and sprocket arrangement, Taglioni’s Gran Sport design drew heavily on his experience working at Mondial. Mondial already had success (three consecutive world GP championships) with shaft-driven double overhead cams in its 125cc road racers.The Gran Sport was successful both as a road racer and as a production street bike in 100cc and later in 125cc displacement. By 1956, the DOHC Bialbero race bike was out and Ducati’s success on the track was driving sales, making Ducati one of Italy’s largest motorcycle manufacturers.Falloon has plumbed the depths of factory engineering data to highlight technical details that might be lost on even the best-informed Ducati enthusiasts, from the curved air scoops on the cylinder heads left-side spark plug recess to redirect air laterally across the head and air intake holes to cool the exhaust header insert to the stiffening ribs inside the pistons from the wrist (gudgeon) pin bosses to the piston crown.A chronicle of significant racing achievements is included as Falloon provides in-depth coverage of the development of the singles from 100cc to 450cc engines that powered Ducati’s iconic scramblers in the 1970s.Packed with hundreds of color and black/white images, illustrations, marketing items and technical data tables, The Book of Ducati Overhead Camshaft Singles 1955-1974 is an encyclopedia for any true-blue Ducati fan and an essential for anyone seriously into this line of historic motorcycles for restoring or collecting.Book Fast Facts: