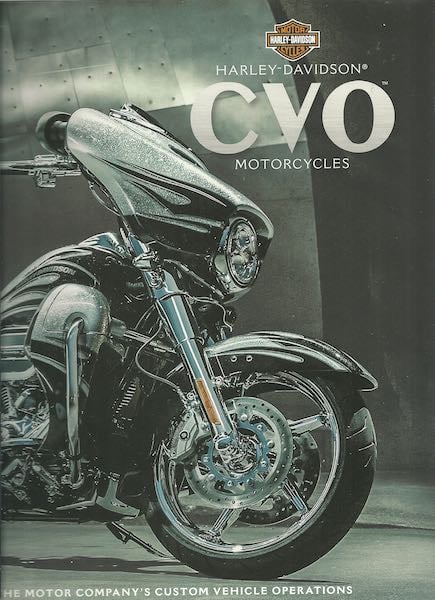 The brand that basically invented the “factory custom” with the Super Glide back in 1971 has since doubled down on the concept with the creation of its Custom Vehicle Operations segment back in 1999.In their definitive work on the history of CVO, veteran motojournalists, Marilyn Stemp and son, Vincent Stemp, document every CVO model offered since the line’s inception.

A convergence of events and opportunity occurred when production of the military-spec MT500 ceased, leaving manufacturing floorspace at Harley’s York, PA plant open for new operations. That coincided with the decision to begin small-volume production of the first CVO bikes, the FXR2 and FXR3 in 1998, with the models released in 1999.By 2000, the FXR4 was in production and Screamin’ Eagle performance parts were added to CVO models to add some punch to go with the glamour.The Stemps document the chronology of CVO from the germination of an idea to growth of demand for the limited production bikes. Addition of the Road Glide and Road King platforms expanded the CVO range into the touring segment. By 2004, the CVO range reached the top of the H-D line with the introduction of the FLHTCSE Screamin’ Eagle Electra Glide.The FLHTCSE was offered in 2004 and 2005, with the FLHTCUSE Screamin’ Eagle Ultra Classic Electra Glide rolling out in 2006 and in the CVO line-up until 2013.The book details the mechanical as well as aesthetic milestones in the CVO product, such as the addition of ABS brakes and “fly-by-wire” throttle in 2008. It includes such fine details important to brand history buffs as when the use of the Screamin’ Eagle name was replaced in model designations by CVO, which happened in 2009. The narrative and images take the reader right up to 2015 when the FLSTNSE CVO Softail Deluxe was in its second year. There is even a section on the not-for-street-use VRXSC Screamin’ Eagle V-Rod Destroyer drag bike.Printed on 9.75” x 12” heavy bond paper, with nearly 250 large format color images—some spanning the entirety of two adjacent pages—the book is not only a history, it is showpiece in itself.Harley-Davidson CVO Motorcycles-the Motor Company’s Custom Vehicle Operations provides an in-depth look at the fully-evolved “factory custom” motorcycle from the company that invented the breed.If Harley-Davidson stirs your soul and knowing all you can about the brand is what you want, this comprehensive look at the most exclusive segment of the Motor Company’s product line will be a worthwhile addition to your rider’s library.Book Data: