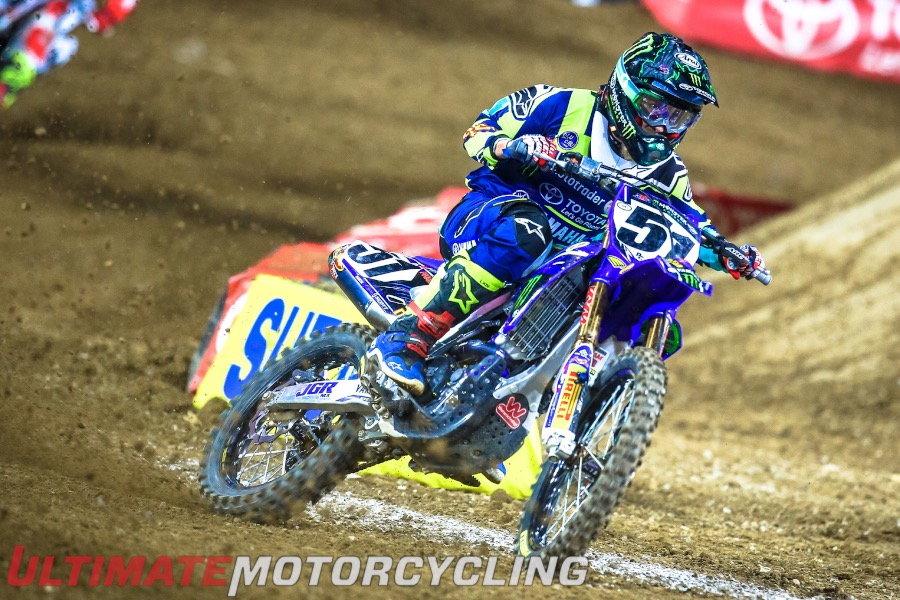 Autotrader/Toyota/Yamaha’s Justin Barcia missed much of the 2016 Monster Energy Supercross season due to a thumb injury that required surgery. Fortunately, the Yamaha YZ450F racer is back in the stadiums, and has finished in the top 20 at both Santa Clara and Indianapolis Supercross 450SX rounds since coming back. Barcia sits just one-point away from the top 20 in the series standings, despite being out most of the season.To celebrate Barcia’s return to Supercross, you can pick up a Rokform Justin Barcia iPhone 6/6S Signature Case (cases for all flavors of Apple iPhone 6 are available) that features an image of Barcia roosting big-time on his JGRMX #51.Given Barcia’s nickname of Bam-Bam nickname, it is no surprise the that the Rokform case is designed to protect your iPhone 6 from abuse. Claiming “military grade protection”, Rokform tells us that the case, which is made of dual-compound plastic and TPU materials, has been successfully drop-tested from six feet. Inside the case, there’s a shock-absorbing inner liner.Rather than using screen printing that can wear quickly, the image of Barcia on the back is made with a UV printing process. For convenience, the iPhone 6 simply snaps into the Rokform case and no complicated installation procedures are necessary.More than just a rough-and-tumble ready case, the Rokform case features the innovative and flexible Rokform Mounting System (RMS), giving you access to mounts for your motorcycle, bicycle, and car, so you can monitor your iPhone apps as you engage in extreme sports, and still protect your iPhone.

“This is the first rider-specific case we’ve produced to sell and we think motocross fans will really enjoy the high-quality photo of such a talented rider like Justin,” Rokform CEO Jeff Whitten says. “Not only does the case do an exceptional job of protecting the device, but we also have an extensive line of accessories that are compatible with the RMS to further customize the user’s experience.”

Barcia himself uses Rokform cases and mounts, though we’re not sure if he uses the model with his own image. “I’ve been using a variety of Rokform cases and accessories for a while now,” said Barcia. “The cases have definitely saved my phone more than a few times, and the bike mount is pretty awesome. Adding a cool riding shot to the case gives it a nice custom look, so I hope the fans like it and are able to see how sweet these cases really are.”The Rokform Justin Barcia iPhone 6 Signature Case case runs $50 for the Apple iPhone 6 and 6S, and $60 for the iPhone 6 Plus and 6S Plus.