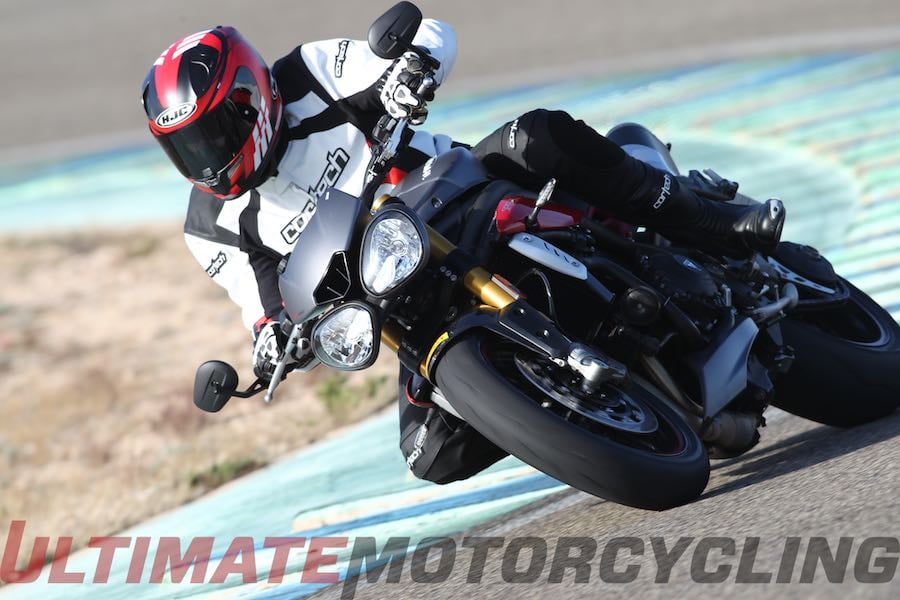 Triumph Speed Triple R Review – Still A Hooligan After All These Years.

Triumph is proud to boast that its 2016 Speed Triple R has undergone 104 developmental changes to refine a proven package as opposed to reinventing the wheel. Those 104 improvements add up to a much more linear and robust power curve mated to a more succinct gearbox and forgiving clutch.Chassis stability and handling sensitivity has been greatly improved, with the overall package complimented by a tasteful evolution to the aesthetics of a now iconic motorcycle. But not to worry; though its table manners may have been improved, make no mistake, the Speed Triple R is still a Hooligan at heart.The powers that be at Triumph understand their naked creation perfectly. In addition to a short road ride in the mountains above the Mediterranean, they put us on track at the Calafat Circuit near Tarragon, Spain, to get a fair shake at what they’ve been laboring over. This is the circuit where the Speed Triple was developed so, naturally, the bike fit the track like a glove in terms of handling and power delivery, which provided the best scenario to fully appreciate how significantly the Triple R’s capabilities have blossomed.First things first. In terms of looks the new Speed Triple represents an evolution of design that retains the soul of the original machine. The 2016 Speed Triple R is enhanced with progressive, sculpted lines that modernize the machine’s longstanding aggressive stance. Most prominent is the appropriately mischievous cat-eye headlights, which are mounted low on the fork to compliment the R’s more compact profile, combined with a small but functional fly screen that doubles as an intake duct.The fuel tank (4.1 gallons) is sleeker, sitting lower on the frame, with the reshaped seat providing a better fit for the pilot in the riding position. The Speed Triple R’s seat also is 20mm narrower at the seat/tank juncture to allow a more confident leg extension when stopped. The sparse bodywork and reshaped tank works with the frame tubes and exhaust as aesthetic elements, augmented by the belly pan, topped off with bar end mirrors (that look as good as they work). The end result is a seamless weld of design cues front to back.The majority of developments for the 2016 Triple are within the “crinkle black” cases and top end of the 1050cc in-line triple plant – from new piston design, crankshaft and combustion chamber, to new ride-by-wire throttle bodies and ECU. These modifications contribute to a stronger, fuller torque delivery with a 5-percent increase in mid-range for a torque rating of 82.6 ft/lbs arriving at a somewhat modest 7850 rpm. The powerband now has a much more linear ascension to a peak output of 140 horsepower at 9500 rpm, and is exceptionally clean and sharp from just off idle all the way to full scream.The new Triple R has five selectable riding modes with variable throttle maps to allow configuring to personal tastes and riding demands. The Rain, Road, Sport, and Track settings present varying degrees of influence (including ABS intervention), with an additional Rider-Configurable mode that allows further customization of throttle feel and response. This adds up to a range of adrenaline rushes. Coupled with the Triumph’s base power means you can choose your poison; lug the Triumph and minimize shifts, or get into the revs and massage the gearbox, the bike rewards the mood of the rider. 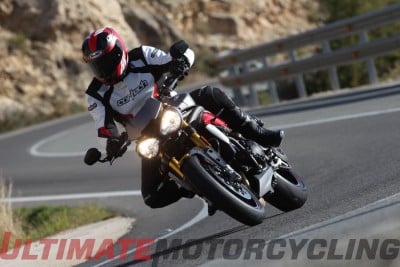 The exhaust gasses being churned out of the reworked combustion process are channeled through re-designed pipes and mufflers that provide a claimed 70-increase increase in flow, helping the engine to breath. The lighter exhaust system has a deep, rich note that enriches the fast-revving Triple, providing the all-important soundtrack to the Hooligan experience.A Slip Assist clutch sits inside the cases and grants smoother clutch feel with reduced effort. The lighter pull rewards with less fatigue on long rides as well as providing a more exacting feel through the entire range of the clutch lever for smoother, more controlled shifts. For aggressive riding, the Slip Assist unit dramatically tames over-eager downshifts, adeptly matching rear wheel speed to engine revs and eliminating virtually any rear wheel hop.When it comes to handling, words such as “intuitive” are used quite prodigiously in the motorcycle vernacular to describe a machine’s temperament. In the case of the Speed Triple R, I went to the thesaurus to see if I could find another descriptor that would do the handling feel justice and was offered: Instinctive—Perceptive—Spontaneous—Innate. All apply.The Triple’s combination of rider comfort, engine response, suspension and handling meld beautifully in a perfectly balanced package, which truly is intuitive. Rider input is rewarded with machine response in exacting feedback and virtually no hint of ambiguity in the front tire. This is at racetrack speeds, with aggressive trail braking, which translates to a very competent motorcycle on the street.The Triple R’s superlative handling is in no small way influenced by top tier suspension, with 43mm Öhlins NIX30 upside down forks handling the front and, suspending the single-sided swingarm on the back, is an Öhlins TTX36 shock. Both units are fully adjustable (preload, compression and rebound damping) and are bolted into the aluminum twin spar frame that,Although the 2016 Triumph Speed Triple R has the same dimensions as the previous incarnation, it increased the weight bias on the front slightly—to 52 percent—courtesy of the lighter exhaust system. The result is a front tire that bites with more assurance and less swimming. The Speed Triple R is shod with 17” Pirelli Diablo Super Corsa SP rubber front and rear, providing tremendous grip at lean and a decent ride when upright and cruising.On track the Speed Triple R shined with unusually stable manners under hard acceleration and equal parts calm demeanor under heavy braking—rare for a quick handling naked machine to possess this duality of responsiveness and stability. Getting the Triple R slowed is a duty thoroughly owned by Brembo four-piston, to-pad calipers in a radial monoblock mount mated to dual 320mm discs on the front end. That’s impressive stopping power for a bike with a claimed dry weight of just 423 lbs., and is managed with a well-shaped lever with consistent feel. A single Nissin two-piston caliper grabs a 255mm disc on the rear. Switchable ABS is standard. The handlebars play into the bike’s responsiveness with a narrow cut, while still offering a generous amount of leverage, which is really what a naked upright bike is all about; performance wrapped around an everyday rider.It’s hard to appreciate the subtleties that Triumph engineers have imbued the Triple, especially when one considers the rawness of the bike that first broke ground some 22 years ago. By comparison the new incarnation is very refined, with sharp response in both chassis and motor. This is especially true of the transmission. The new box provides six evenly spaced gears that complement the power of the Triple. However, the tranny is perhaps my only qualm. On track, under hard acceleration, upshifts had to be carefully massaged otherwise the bike refused to go into the next gear. This was countered by simply making more concentrated, focused shifts. To be fair, this was only experienced on the track. For a more realistic (read; sane) street application the shifts were succinct and smooth.The 2016 Triumph Speed Triple R pays homage to its 22-year lineage, respectfully retaining the naked upright brashness of the original while carefully modernizing with the essential technological advancements that are redefining performance. Keeping it all organic and visceral is what it’s all about and a task that Triumph has executed with aplomb.The new Triple R is accented with tasteful bits, such as the carbon fiber front fender and tank panels, billet aluminum handlebar clamp, riser and swingarm pivot. The belly pan ties the radiator cowls together in a display of sparse bodywork and for a bit of real class the alloy wheels are pinstriped. The Triple R is available in Crystal White or Matt Graphite and can be had for an MSRP of $14,900. Happy Hooliganing!