Heading into round 15 at Twin Ring Motegi, the reigning Moto2 Champion Tito Rabat was the only rider capable of challenging Johann Zarco for the 2015 Moto2 title.But Rabat was unable to start the Japanese Grand Prix, which allowed Zarco to clinch the title ahead of the race. The AJO Motorsports Kalex pilot was officially crowned 2015 Moto2 Champion following the first free practice of Japan Moto2.The title didn’t slow Zarco down, though. After earning pole, the 25-year old rode strong during Sunday’s Moto2 race, taking his seventh win of the season. Joining Zarco on the Japan Moto2 podium were two other Kalex pilots, Jonas Folger and Sandro Cortese, respectively. 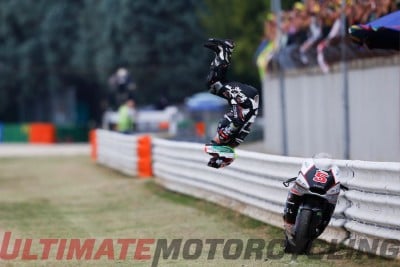 Speaking after the Japan GP, Zarco says “The race went very well. I knew Jonas [Folger] would push very hard from the beginning and I tried to follow him. I saw that gradually the asphalt was drying out and I decided to overtake him and try to escape, because it was the safest strategy.“I felt comfortable and I tried to stay focused and not make any mistakes. The last two laps were not easy, because although I had a good advantage it is easy to make a mistake in the wet. The end of the race was fantastic and I was overwhelmed. I want to thank the team and all the partners who have allowed me to be in the World Championship all these years. I am very happy; thank you.”With two three rounds remaining, Zarco now has 309 points – 97 ahead of Rabat. But from the looks of the season opener at Qatar, it didn’t look as if the Moto2 Championship would end this way.Zarco, the 2007 Red Bull Rookies Cup title winner, experienced technical issues at Qatar, and finished eighth. He followed that up with a second at Circuit of the Americas for round two, and Zarco would earn his first win at round three in Argentina (Termas de Rio Hondo).Zarco earned the points lead, and claimed podiums at Jerez, Le Mans and Mugello. Then the back-to-back wins began, and Zarco was victorious in Barcelona and Assen. He finished second in Germany and and Indianapolis, and followed this up with three-consecutive wins at Brno, Silverstone and Misano.He had an opportunity to clinch the title at Aragon Moto2, but was forced to finish sixth. Zarco’s next chance was at Motegi, and due to his biggest challenger Rabat forced to not start, Zarco was able to clinch the title.Johann Zarco has now become the most successful French motorcycle GP rider in history. 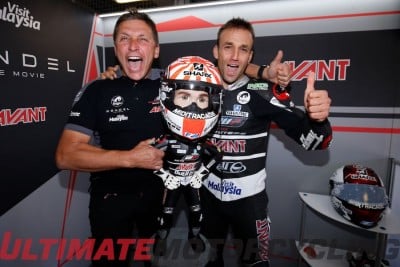