A 3200-mile round trip from my home to the 75th Sturgis Rally was no short-term evaluation on the 2015 Kawasaki Vulcan 1700 Voyager ABS touring cruiser. It was a good wringing out. This doesn’t include the 350-mile trip between Kawasaki Motors’ headquarters in Irvine, Calif., and my Tehachapi, Calif., home, through heavy Los Angeles traffic on Interstate 5.It has been over 30 years since I have owned a cruiser, and I have never travelled that many miles on any motorcycle in a single trip. A close second was 1800 off-road miles in the 1995 Nevada Rally, the Land of Enchantment Endurance Rally (LEER), and another 1000 in the Colorado 500 on a KTM 620 RXC. For many, a touring cruiser is an enjoyable way to see a paved America, and the 2015 Kawasaki Vulcan 1700 Voyager ABS is one of many options.The necessary legal forms were signed, and I was out the big roll-up doors of Kawasaki and straight into commuter hell. I didn’t dare to split lanes on a full dresser loaner, as I knew little of or how I could somehow get it home quickly and safely. Eventually, traffic lightened up halfway towards the infamous Grapevine and the lonelier open route home.It was a warm day to be in a jacket and not realize there are adjustable louvers at the legs I can open to keep cooler. Keeping the bike stable in stop and go traffic sent tension through my shoulders and neck. I started to think I made a mistake. But, once on the open road and off Interstate 5, I stopped, took a photo, and relaxed the rest of the way home.The first thing I noticed on the bike was the size of hand controls and spread of the buttons. It takes big hands to comfortably reach for them and how the bike ergonomics seem to be designed for Hulk Hogan-sized men. Perhaps this is a designers approach to the cruiser market by giving an average-sized rider the feeling of having a big motorcycle.I will eventually get use to them as I have to walk my hands up the grip to reach for my favorite volume button to my Ram-mounted Android cell phone and Spotify playlists I wired through the factory iPod adaptor cable to the OEM sound system by using a 3.5mm connector I stripped and soldered copper strips to shove in the blade connector. 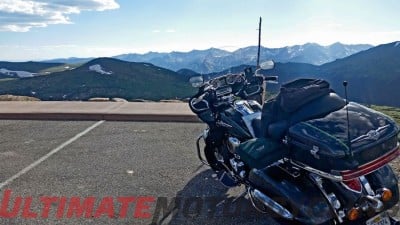 A couple days later, and after some model research, I loaded the Voyager’s saddlebags and the rear seat with gear to rest my back on, remembering my Harley-Davidson days. I loaded the bike on a trailer for my starting point in Las Vegas from a friend’s home where I would pull out before desert heat set in.After passing through 104-degree heat in Mesquite, there is a northern route on Highway 91 at Beaver Dam exit to scenic Gunlock, Utah, cooler temperatures and historic stops. My first night stay was in Cedar City, and a next day ride towards one of the highest rated scenic routes of Highway 12 to Bryce Canyon, Grand Staircase-Escalante Monument, and through scenic Capitol Reef National Park to Interstate 70 and my night’s destination of Grand Junction, Colo.Packing anything on the Vulcan 1700 Voyager’s rear seat proved difficult without anything to hook to. Saddlebag frames were used to hook to but not easy getting to. Bodywork is plastic and not an ideal material to place bungee hooks. Saddlebag space is ample but not enough for cross-country touring. I was stretching a cot, my clothing bag and a small backpack with miscellaneous items for quick access as my backrest. The saddlebags carried my laptop, inclement weather gear, leather jacket, dress jacket, dress shoes, and a fanny pack of tools. Laundry needs were planned at my rendezvous in Colorado with friends, and our house rental in Sturgis.Backtracking west from Grand Junction to Loma is Highway 139 and over scenic Douglas Pass for Rangely, Highway 64, and Meeker. After a fantastic Italian lunch at Ma Famiglia, it was further north up Highway 13 to Craig and Interstate 40 to beautiful Steamboat Springs and a turn on Highway 34 to scenic Grand Lake. From there it was through the busy traffic of the Rocky Mountain National Park, majestic Tombstone Ridge, and down to Estes Park – all gorgeous areas of Colorado.Upon arriving in Estes Park, I called my old friend Allan to meet me at a gas station west of Loveland with his brothers and friends for a ride to Windjammer Roadhouse Bar and Grill for Bike Night and a cold beer with my partial Sturgis family.We rode around Carter Lake Reservoir and to Allan’s home in dark. A day of relaxing and preparing and the next morning we all left for Sturgis through Cheyenne and Highway 85 towards the Black Hills National Forest and our destination.Riding in formation and passing the slower groups of arriving Sturgis participants and vehicles required a hard twist of the throttle. The Kawasaki 1700cc motor lacks faster revving to quickly pass in higher gears, but is strong in the lowers.After 80 mph, you can shift the Kawasaki Voyager into sixth, but any incline or need to again pass, you must shift down to find that narrow sweet spot in even the tall lowering gearing of fifth.On the subject of the transmission, there is that loud but tolerable clunk going to second gear. The rest are smoother and properly spaced, until the overdrive 6th gear. It just didn’t feel needed unless you are riding above our nation’s legal speed limits.Fully loaded and getting momentum seems slow on the Voyager compared to my companions Harleys, but the big Kawasaki feels stable reaching the occasional 100 mph. Curb weight is factory speced at just under 900 pounds with all fluids but no load, with a stout 108 ft/lbs of torque at 2760 rpm on tap. I’d prefer a quicker revving motor for group passing needs, but the Voyager motor worked fine when I was on my own passing individual vehicles. To slow the weight of 900+ pounds of bike takes good brakes and the Kawasaki Vulcan 1700 does fine in that department.I wasn’t always looking at the analog speedometer as much as I did the tach to feel for smoother operation. I prefer a digital readout of my speed. Lugging the motor at lower rpm did not feel right, and preferred the smoother range near 3000 rpm, just above the torque peak. 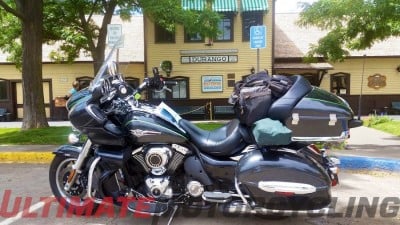 The bike is relatively quiet and just the way I want it. Looking for that low rpm “potato-potato” sound of a Harley isn’t going to happen. Aftermarket pipes can add volume, if desired.Gas stops were planned at shorter distances for the sake of none of us going dry. The Vulcan holds 5.3 gallons and a dashboard provided scattered fuel range estimates, but the range seems short.We arrived in Sturgis to our house rental and meeting three other friends and family of my old friends. Our rides included the Iron Mountain Road, Deadwood, a tour of Buffalo Chip and Full Throttle Saloon, and the downtown crowds of Sturgis. This included lots of awkward moments in the large massing of bikers on heavy cruisers.Balancing bikes in stop and go traffic can turn the cool rider into a dweeb as we paddle and wobble our way out of stops or takeoffs. That is not as apparent when on lighter, taller-in-the-saddle bikes. The more weight mounted high on the bike, the worse it can get.Suspension worked as expected, and absorbed any dips or ledges in pavement encountered. It even felt stable at a good clip on the pea-gravel road to my home. Cornering a full dresser at highway speeds is first intimidating, and it takes time to get courage to lean in angles and scrape the moveable floorboards if pushed, though riding a passenger may challenge your confidence. The tires felt appropriate and handled the weight and upcoming rain confidently. The bike handled steadily throughout my speed ranges and never got out of hand.The best part of my trip was having “My Soundtrack of Life” playing through the fairing mounted speakers of the Vulcan Voyager. The sound system isn’t powerful enough to blast it for the entire interstate or neighborhood, but just enough to enjoy even at 80 mph. I heard and saw many louder systems, but don’t feel that they are appropriate.After our four-night stay in Sturgis, we departed with the three other new friends and the rest of us headed back to Loveland, Colo. A little rain was experienced and I’d get much more on my way towards Flagstaff riding solo. 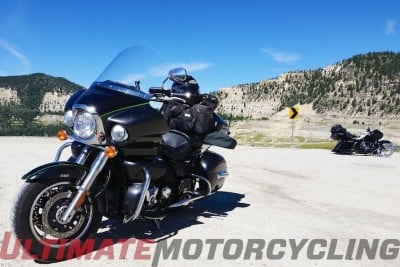 With the full coverage fairing, I kept mostly dry without needing my rain suit. Stopping in rain is a different story. And vision through the large clear windshield is not great in heavy traffic. Other less-protected riders would get soaked. The cooler temps were not bad with the help of 1700cc of engine heat. Returning back to lower desert heat once again brought mild discomfort in the leg areas, but is tolerable if you’re used to it.What I liked about the 2015 Kawasaki Vulcan 1700 Voyager ABS is its relative quietness, radio, comfortable seat, and protective full fairing. With a little back support, all-day trips are a breeze. Frequent fuel stops provide the needed stretches and blood back to your tush.What I didn’t like was the “Big Man” layout of the controls. Grip size and hand controls could be a little more realistic and comfortable, and I’m not a small guy. Cargo mounts for my extra gear could be designed in the rear, and I prefer more solid saddlebags to the flimsy plastic. I also wish for the fairing to cover my hands from the occasional pebble or bug.Overall, I liked the 2015 Kawasaki Vulcan 1700 Voyager ABS full dresser touring-cruiser, and I would turn around and do it again. There’s more America to see.Location photography by Damon Powell2015 Kawasaki Vulcan 1700 Voyager ABS Specs: