Back in March, the American motorsports community lost a one of its heroes following a street-bike crash – Dane Westby, nicknamed the “Wolverine” by five-time Daytona 200 Champion Scott Russell.The road-racing community quickly responded, and memorials began around the country for the 28-year-old Tulsa, Okla., native.And on Wednesday, Dane Westby’s father Tryg – owner of Yamalube/Westby Racing – further memorialized his son by donating Dane’s #00 Yamaha YZF-R6 to the Barber Vintage Motorsports Museum in Birmingham, Ala.It’s the same Yamaha that Dane won both AMA Pro Racing Daytona SportBike races at Barber Motorsports Park in 2014.“Dane had loyal fans all over the U.S. and throughout the world,” Tryg said. “Now that his golden #00 R6 is here in its new home at the Barber Vintage Motorsports Museum, his fans will have a chance to visit the Museum, see the bike, and remember my son.“I’m certain that he would be thrilled to know that his racebike is in the Museum and at the track where he won both races last year. Dane loved Barber Motorsports Park. He loved the Museum, the track, and the awesome fans who cheered him on here. I’m proud to donate Dane’s bike in his honor.” 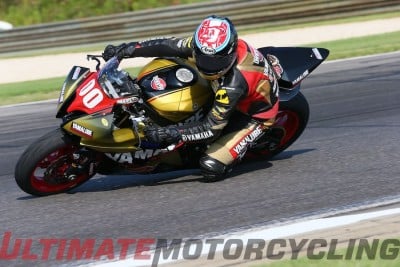 Jeff Ray, Executive Director of the Barber Vintage Motorsports Museum, also commented: “The Barber Museum is honored to become home to the Yamalube/Westby Racing Yamaha YZF-R6 that the late Dane Westby rode to victory in last year’s AMA Pro Daytona SportBike races here in Birmingham.“We appreciate that this bike has a history at the track at Barber Motorsports Park, and with it having been ridden by Dane Westby, it becomes an especially important bike in our collection.”Yamaha reports that the bike joins the Museum’s collection of more than 1,400 pristine motorcycles and automobiles, and it will be displayed alongside the racebikes of world-renowned motorcycle racers like Jarno Saarinen, Yvon DuHamel, Colin Edwards, and many more.About Barber Vintage Motorcycle MuseumGeorge Barber’s zeal for speed ignited his vision for today’s museum. Having raced Porsches in the 1960s, Barber held an impressive record of 63 wins. A thriving business executive, Barber rediscovered his motorsports passion in 1988 and began collecting and restoring classic cars. But, since the world’s best and largest car collections had already been established, Barber heeded some advice from longtime friend Dave Hooper, a motorcycle enthusiast, who suggested Barber shift his focus from cars to motorcycles. Barber seized the opportunity to build the world’s “best and largest” motorcycle collection.The Barber Vintage Motorsports Museum is a 501(c)(3) Not for Profit Foundation located at the 830-acre Barber Motorsports Park, in Birmingham, AL. Over the course of the past decade, the Barber Museum has brought people from around the world to Alabama, and it was named the #1 tourist attraction in Birmingham in 2014.The museum is the home of the world’s largest motorcycle collection. Each year, it hosts vintage motorcycle and racecar events, including the Barber Vintage Festival and Barber Historics.For additional information, visit Barber Vintage Motorsports Museum.