One year on from its public debut in partially completed form, the exotically styled, extravagantly engineered Bienville Legacy motorcycle made a return visit to the City Bike Night street party in Birmingham, Ala., organized by Motus owners Lee Conn and Brian Case — suppliers of the 1645cc V-4 engine that powers the bike.

This time around there wasn’t just a single unfinished prototype on view; there were no less than three completed examples of what, by any standards, is surely the most idiosyncratically conceived motorcycle in the world today — one which entirely reinvents how a motorcycle should be from the ground up.

As much of a two-wheeled work of art as a functioning motorcycle — which it indeed is — the Legacy is the creative masterpiece of Louisiana motorcycle designer J.T. Nesbitt, and has been taking shape in his New Orleans studio for the past two-and-a-half years.

As such, it owes nothing whatsoever in terms of concept or execution to any motorcycle built before, beyond having two wheels and an engine. Oh, and the girder fork from one of his previous creations, the über-minimalist Confederate Wraith – Nesbitt conceived it as a tribute to his design hero, Kiwi visionary John Britten.

Nesbitt, 42, is a fine arts graduate from Freddie Spencer’s hometown of Shreveport. As a student, he assembled a motorcycle in the art faculty of Louisiana Tech, then closely avoided being kicked out of there after he rode it up and down the second floor of the building. “I needed to make sure it’d run OK before I stripped and painted it!” Nesbitt explains.

He later practiced sculpture in between waiting tables and bartending, before moving to designing motorcycles after Confederate Motorcycles owner Matt Chambers recognized a fellow iconoclast who could help him promote Confederate’s Art of Rebellion. 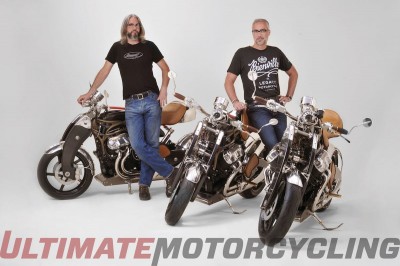 In designing bikes like the Hellcat, with its exhausts exiting via the swingarm tubes, or the Wraith, conceptualized from a blend of vintage board tracker and Italian racing bicycle, Nesbitt set Confederate on track to becoming the boutique brand of choice for America’s rich and famous. Hollywood A-listers Tom Cruise, Brad Pitt, and Nicholas Cage, through to rock icon Bruce Springsteen, head the high-profile roster of Confederate owners; often there is more than one of these exquisitely crafted two-wheeled exotica in their personal garages.

Then came the tragedy that was Hurricane Katrina, which in August 2005 devastated New Orleans, and with it the Confederate factory just as the Wraith was reaching production in the hands of development engineer Brian Case, then working under Nesbitt’s supervision.

Confederate relocated to Birmingham, courtesy of Southern motorcycle patriarch George Barber, but Nesbitt declined to go along with the move, preferring to stay in his adopted city, and help work on its recovery from the onslaught of Nature.

Nesbitt established Bienville Studios — Jean-Baptiste Le Moyne de Bienville was the Quebec-born French governor who founded New Orleans in 1717 — as a freelance design house. There, he has created a wide range of products from ornate knives and guns to the Magnolia Special. Notably, he hand-built a 1930s-styled sports car powered by compressed natural gas, which Nesbitt and driving partner Maxwell Materne drove from New York to Los Angeles in 89 hours to demonstrate its validity, and practicality.

However, Nesbitt’s heart remained in motorcycles. Lacking financing, the design that had been taking shape in his mind since 2005 remained consigned to copious drawings — until Chicago-based entrepreneur Jim Jacoby appeared in his studio in April 2012.

“He was a total stranger, who walked in out of the blue and simply asked me, ‘What would you design if you could design anything at all?’” recalls Nesbitt. “But, because I’d been preparing for the past seven years to have that question asked me, I told him I would design the bike that answered all the questions the Wraith had asked, and I pulled out the sketchbook and showed him what I had.

“So then he said, ‘Right – let’s build it!’ But that only happened because I was ready to answer the question. I’d waited a long time to make a design statement like this, and I’m proud to be doing it in partnership with ADMCi, which made it all possible.”

ADMCi (American Design and Master Craft Initiative) is a body that is seeking craft designers in all forms of industry to undertake projects that celebrate the greatest aspects of their craft. This is a means of informing digital designers how to set a new standard for craftsmanship in the 21st century, and its founder and CEO Jim Jacoby, is similarly recognizant.

“As our first commission, it was crucial that the master- craftsman we engaged hit it out of the park, and scored a home run,” Jacoby said. “There’s no doubt J.T.’s accomplishment will advance our message of universal design principles, and the criti- cal need for master-craftsmanship as a technological, economic, and cultural driver.”

One of the three bikes built will be heading to the Bonneville Salt Flats next August, where Jacoby — a high-mileage BMW R 1200 GS owner — will attempt to set a series of new AMA Land Speed Records aboard it as a demonstration of the functional capabilities of this two-wheeled work of mechanical art.

Once given the go-ahead to translate his concept into metal, Nesbitt needed to source a powerplant for it, and for him there was just one choice — the all-new 1645cc pushrod OHV, eight- valve, 90-degree V-4 developed by the Birmingham-based startup, Motus Motorcycles. Motus, which is building its own sport-touring motorcycle with the powerplant, was founded by Brian Case — Nesbitt’s former collaborator when bringing the Wraith to production — and his partner Lee Conn.

“For a long time I’ve wanted to create a quintessentially American four-cylinder superbike, taking the idea of bikes built in the USA in decades long past, but brought up to the present with concepts and materials only available today,” says Nesbitt. “That being the case, I couldn’t use any other engine than the Motus V-4, which epitomizes American engineering culture.

The two partners in Motus repaid the confidence by releasing three of their new production engines to the Bienville project. This duly formed the basis of the trio of Legacy motorcycles unveiled in public at their City Bike Night street party, just two weeks after the first production Motus MST-R was delivered to its new owner.

Of these, two have normally aspirated Motus V-4 engines, with the third fitted with a Danish-made Rotrex supercharger delivering 10 psi of boost and chain-driven off the left of the bike. Together with titanium valves, a hotter camshaft, and a higher compression ratio, the modifications are expected to boost out put to close to 300 horsepower—the street Motus MST-R already produces a claimed 180 horsepower at 7800 rpm at the crankshaft.

The motor is employed as the principal load bearing structure in creating the Legacy, with a vestigial chromoly tubular space frame locating the steering head, as well as the mounting bracket for the rear aluminum structure comprising the seat. This bracket also doubles as the mount for the single centrally located carbon composite leaf spring, which comprises the mothership for the entire suspension system.

“The leaf spring is a modern day Paleolithic bow,” declares Nesbitt. “Our first experience of springing as a human race was by pulling a bow to shoot an arrow.” An eccentric adjuster on each end of the blade allows the tension of the spring to be altered, to achieve the same preload adjustment benefit as wind- ing the coil springs on a normal fork or shock up or down, while damper struts at each end are fully adjustable for both high- and low-speed damping.

Using the leaf spring allows both sprung and unsprung weight to be reduced compared to a conventional suspension system, as well as significantly reducing the parts count and centralizing mass.

The use of carbon composite material for the spring both further saves weight, and enhances longevity via its longer life cycle compared to steel, in enduring the constant flex endemic in a suspension system, according to Nesbitt. It’s a degree of innovation that is breathtaking in its ability to think outside the box of conventional two-wheeled design; Nesbitt has rationalized the Legacy’s suspension to the ultimate degree.

In addition, employing the single longitudinally mounted leaf spring permits the use of four identical carbon fiber suspension arms front and rear—two to act as Britten-style girder fork struts up front, and two at the rear functioning as the swing- arm to deliver a 62.5-inch wheelbase. Each consists of a carbon fiber structure that is internally braced with a carbon rod and fitted with 7000-series aluminum caps milled from solid billet. These caps are bonded to the carbon composite, as well as mechanically attached.

“Imagine the root of a tooth,” says Nesbitt, “with the carbon fiber acting as the gum; it’s the same format. We have a progressive rate suspension system based on the same pivot front and rear, and there’s a titanium rod that connects the two blades together which pivots on bearings, so that, as the stanchion with the rear ride height adjuster rises, it forces the triangle of the linkage, which holds the leaf spring down.

“The lynchpin of the design is really in the front, however. There’s a rod that runs concentric with the steering axis to a pivot point located beneath the triple clamps. That allows the separation of suspension and steering, which are now completely decoupled, while also centralizing the mass of the resistance force of the spring itself, which is not on either end of the motorcycle anymore. It’s in the middle!”

Nesbitt is especially proud of the fact that with a single hex key he can adjust the trail, rear ride height (and thus effective head angle), chain tension, headlight angle and seat angle. How’s that for accessibility? 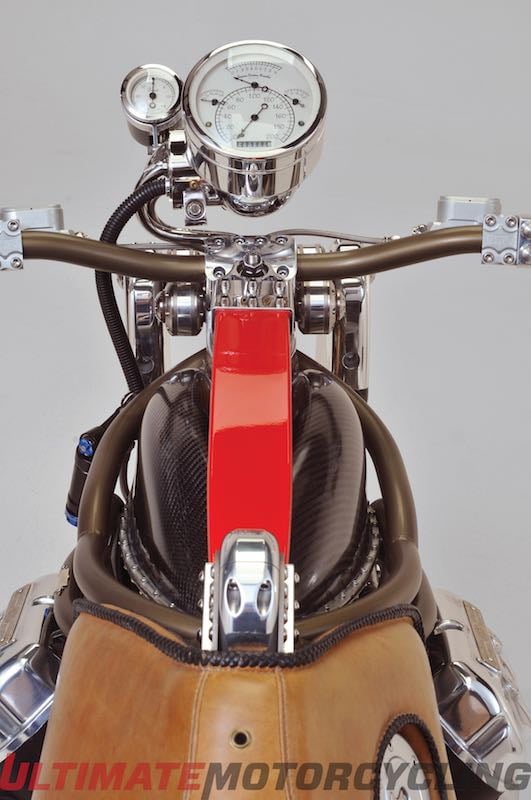 Three identical 250mm brake discs gripped by radially mounted Swedish-made ISR four-piston calipers sit at the opposite extremities of three of the four blades, and there’s a small steering damper mounted at the front of the bike. BST carbon wheels made in Johannesburg by Blackstone Tech are employed, and the South African company manufactured all the carbon fiber components in the Bienville Legacy, including the leaf spring.

“I can’t thank [BST owner] Gary Turner enough,” says Nesbitt. “He made all the carbon fiber components exactly as I had designed them to be, and I know this wasn’t simple. He’s a genius.”

There are two interconnected fuel tanks with a total capacity of four gallons. One is mounted at the rear of the engine, with another positioned low down that contains the high pressure fuel pump that delivers gas to the Magneti Marelli EFI, which lives in a very serviceable place where it can be accessed easily from beneath.

Hand-carved wooden handlebar grips are an idiosyncratic feature, as is the circular white-faced dash instrument integrated with the dual-function halogen headlamp, which shows road speed, engine speed, water temp and oil pressure, as well as a mechanical mileage counter. How quaint.

The Art of Rebellion, which Nesbitt previously practiced during his time at Confederate, has been replaced by Bienville Studios’ Craft of Innovation — a similar ethos, but with a different result, and twice as many cylinders.