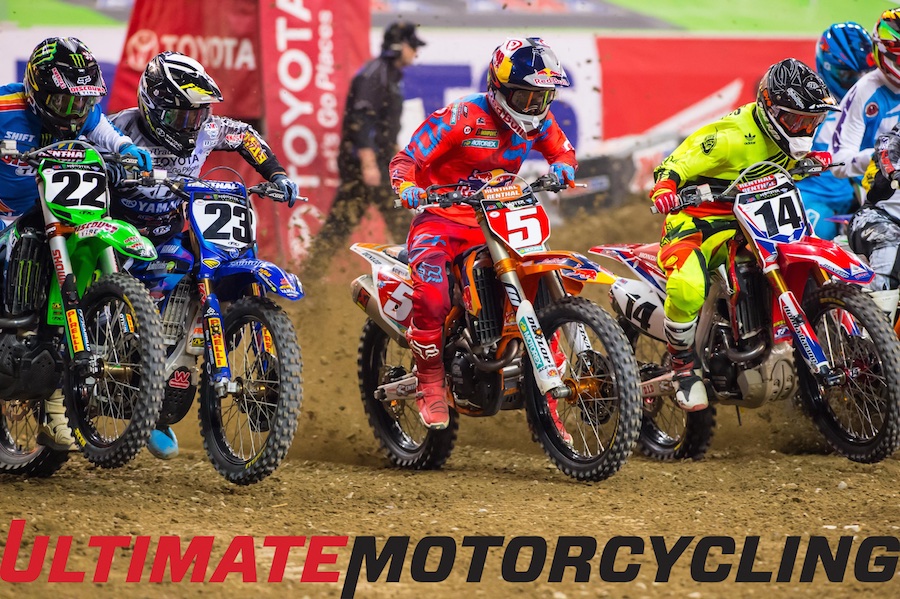 The 12th round of the 2015 Monster Energy AMA Supercross series took place at Ford Field in Detroit. The track featured several technical rhythm sections, a sand section, and a unique, elevated part of the track that led the riders up into the stands.The big news of the night in the 450SX class came before the Main Event even started when Team Honda’s Trey Canard landed on top of Team Tedder/Monster Energy/Kawasaki’s Jake Weimer in Semi #1. Weimer had gotten out of shape and jumped in front of Canard, who had no way to avoid the Kawasaki rider.The incident left both riders sidelined for the rest of the night with word spreading that Canard and Weimer had each broken an arm in the crash.Canard, with his arm in a splint and wrapped up, looked angry as he was driven off the Ford Field floor by the Asterisk Mobile Medical Crew. Weimer’s jersey was ripped from where Canard’s front wheel landed on him. Weimer sat on the landing of the jump where the incident happened for some time before the red flag was thrown by AMA officials, stopping the race to allow the track to be cleared.In the Main Event, GEICO Honda’s Eli Tomac came around the first few corners in third place behind Monster Energy Kawasaki’s Davi Millsaps and Red Bull KTM’s Ryan Dungey. Tomac wasted no time passing Millsaps, which he did at the beginning of lap two.From there, Tomac pursued Dungey and made the pass on lap five to take the lead. Tomac led the remaining laps to take his second victory of the season. “I am just so glad that I was able to put it together that time,” said Tomac of the ride. “I’ve had so many up and down races where the day starts out awesome. I qualify first and have good heat races. Then I just make mistakes in the Main Events. I guess it’s just part of getting older, more experienced, and maybe becoming a little more crafty. I think I was being impatient at times. To take this win is great.”Red Bull KTM’s Ryan Dungey did exactly what he needed to do to extend his massive points lead. The Minnesota native led the race until lap five, before being passed by the hard-charging Tomac. Dungey’s second place performance puts him 67 points ahead of Canard in the point standings with only five rounds remaining, and Canard is likely out for the remainder of the Supercross series. “I got a good start tonight,” said Dungey. “He [Tomac] made a pass to get by me, and it was a solid pass. He is a good, clean racer. Of course, the goal is to win each race that we can, but sometimes it’s important to remember to ride a safe race and maintain the points lead as we near the end of the series. We still have quite a few rounds remaining and it’s important to finish each on the podium.” 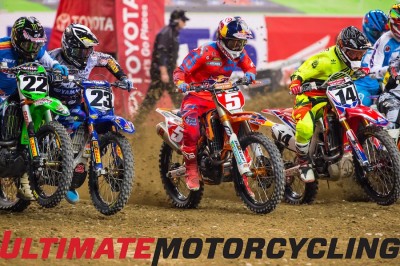 Team Honda rookie Cole Seely grabbed a fourth place start and was shuffled back in the first few corners. However, by the second lap, Seely was back up into fourth place and pursuing Monster Energy Kawasaki’s Davi Millsaps. Seely passed the veteran on lap four to take third place, where he remained for the rest of the race. His podium in Detroit marked Seely’s second podium finish in a row and his third so far this season.“It was another good day overall,” said Seely. “I got a heat race win again and overall, I feel like I’ve been riding really good. The laps are getting easier for me when I’m running with the front pack. The track was really technical and ended up being pretty slick. Not many of us hit that quad before going into the Main Event, so I knew I had to wing it. It was definitely scary, but made for some good racing.”TwoTwo Motorsport Kawasaki’s Chad Reed came around the first few corners in fourth place, but a bobble by the veteran in the second corner put him back a few positions, temporarily. Reed found himself in sixth place on lap four and got around AutoTrader/Toyota/Yamaha’s Weston Peick after the Yamaha rider crashed on lap six. Reed passed Millsaps later on in the race to take fourth place on the night. Reed moves up to fifth in the season standings, 101 points behind Dungey.Millsaps rode the first few laps behind race leader Dungey before getting passed by Tomac, Seely, and Reed. After several up and down finishes this season, Millsaps sits in 11th place in the points standings with 119 points to his credit. 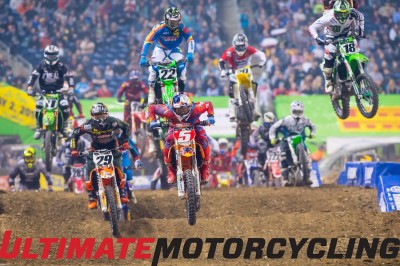