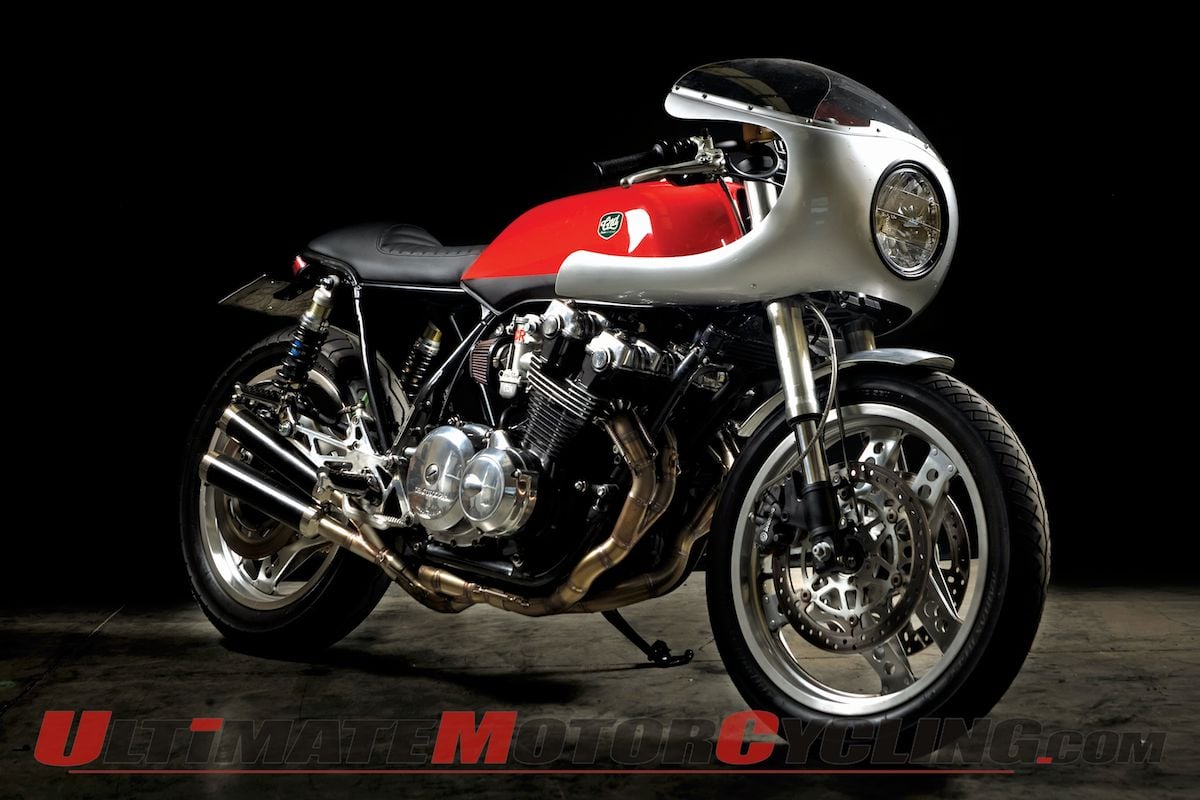 Cafe Racer Dreams #1 EVO Honda CB900 Bol d’OrPedro García’s roots in motorcycles were planted early. His first motorcycle — a Yamaha PW50 — arrived when he was six years old. “I always loved dirt bikes and sport bikes,” García says, and they inspired him as a youth— a calling that continues to this day.García is the founder of Cafe Racer Dreams, a custom shop in Madrid that specializes in the transformation of classic motorcycles from any era into something new and unexpected.“After working in the automotive world, and with motorcycles, and also in the art world, I decided to mix these passions and thus was born CRD.”“My inspiration can come from anywhere,” García says. “I love sports cars—all pre-1980 era seems ideal. I love nature, the arts, and the pretty girls. I think we have it clear that less is more and the bike must have a motor, wheels and little else!”Since the company started in 2010, CRD’s 50-odd builds have included projects ranging from a 1970s Ossa 250 two-stroke turned retro GP racer, to a bobbed-and-knobbed post- apocalyptic BMW R 1200 S.CRD began its journey to prominence with, appropriately, CRD #1 CB900 Bol d’Or. Perhaps telegraphing to the world that CRD was in it for the long haul, the company’s first build was named after a famed endurance race.First run in 1922 on three clay tracks in the Paris area, the Bol d’Or is a 24-hour endurance race with an unmatched history. It has subsequently been run at such renowned circuits as Saint-Germain-en-Laye, Montlhéry, Le Mans, and now, Magny-Cours, where it is part of the FIM Endurance World Championship series.A café racer adaption of the 1983 Honda CB900F, CRD #1 was built for García himself. “The idea was to create a classic racing bike apt for riding on the street,” García tells us. “The challenge was to make it in the best possible way, considering that was the first time and my experience was not what I have today.”Not fully satisfied with CRD #1, García and shop foreman (and CRD partner) Efraon Triana set out to improve on the original bike. “He is a true professional with the bikes we design,” García says of Triana, “and is responsible for making all the ideas a reality.”The original idea was to simply upgrade the performance of CRD #1, but as is so often the case with creative minds, there is a blossoming of ideas.“CRD #1 was my bike and I wanted to improve the suspension,” García recalls. “In this way, I also started thinking that I wanted to make an aesthetic change.”Without any doubt, the CRD #1 Honda CB900 Bol d’Or received a major performance and visual overhaul. CRD repainted the machine, installed competition Keihin carbs (with K&N filtra- tion), tapped Escapes GR to create a handmade 4-into-4 exhaust system, added a Ducati SS fairing, installed Showa and Öhlins suspension, replaced the stock brakes with a modern Brembo system (yet still mounted on stock CB900F wheels), installed a simplified Motogadget electrical system, and minimized the seat. At the end, CRD #1 EVO was the stunning result.Grafting on the Ducati-sourced Showa forks and keeping the bike in balance was the most difficult part of the conversion process, according to García. Still, he says the build was “perhaps the easiest of all, but it has taken the most time, effort, and money invested.”The appeal of the air-cooled Honda inline-4 powerplant is immutable. To be sure, its adherents prefer different eras, ranging from the original CB750K0 in the 1960s to the current CB1100. The mixture of performance, complexity, and reliability is surely intoxicating for many.García has ridden the stock 1983 CB900F, along with Honda’s current CB1100, a bike that is clearly inspired by the CB900F.“In the original, you have a lack of brakes and suspension,” García ruefully acknowledges. “The new Honda has everything, but you also have a smoothness I do not like that is not found in the EVO. In the CRD #1 EVO, you find good feelings, coupled with soul, character, and a classic sense. It’s hard to compare—three totally different bikes.”Fulfilling the promise of a name born of competitive racing, García has raced CRD #1 and EVO on Circuito del Jarama in Madrid and Circuito de Velocidad Kotarr in Burgos, Spain. Wistfully, García also admits, “and the streets were a circuit for me—ahhhh.” His time with CRD #1 is over, however. “I sold it a few months ago, and I miss it!”As CRD has grown, so have García’s responsibilities changed. “After creating the brand and working on the bikes, I knew my time became more profitable on the business side — in part with the client to design the bike of their dreams,” he says. “For the workshop, I have the best partner. Efraon does everything and I want the client to enjoy the highest standards.”García never expected such success so quickly. “It started as a game, making a bike for me. But my passion and desire to give people what I did not find in the market resulted in what we have today,” he says.The future is varied for CRD. An order for a CRD Porsche 911 has been made, with other automobiles to follow. An electric CRD motorcycle is planned, but still “just a dream” according to García, which is to be expected of a man who named his company Cafe Racer Dreams.CRD #1 EVO Honda CB900 Bol d’Or Specs:Photography by Alberto LessmannStory from Alchemy section of Ultimate MotorCycling magazine. For subscription services, click here.