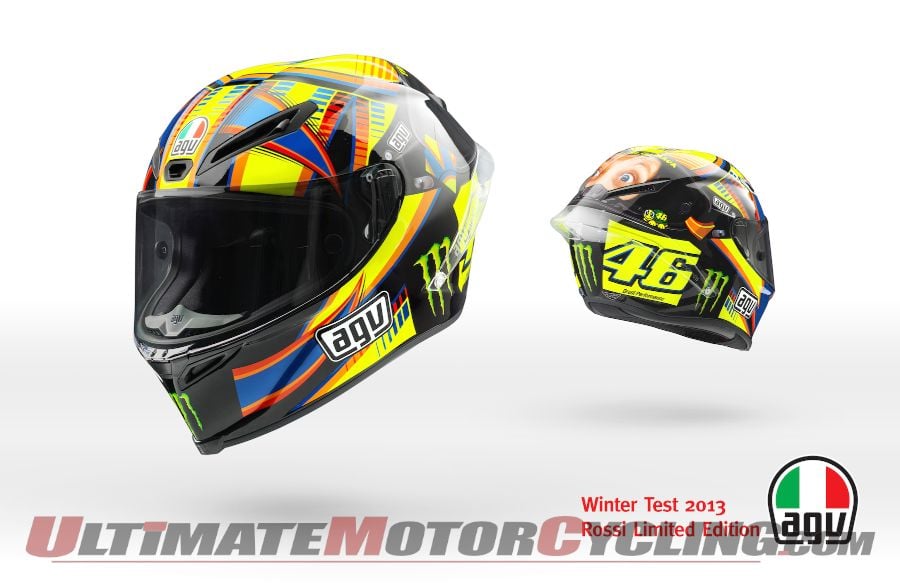 AGV Rossi Replica HelmetAt the official test in Sepang last winter, Valentino Rossi amazed everyone with a brand new helmet for the first laps of 2014. As usual, “The Doctor” showed no lack of originality, never ceasing to surprise us with his ideas.After the more conservative yellow and gray AGV Pista GP, which he wore during the last year’s Winter Test to match the color scheme of his bike, the new helmet, which was exclusively created for the Malaysia track, is simply spectacular.The designer, Aldo Drudi, included the famous Sun and Moon symbol Valentino carried during the 2013 World Championship Series. This time, however, he inverted things by 180°, with the front and rear apparently the same. From behind it looks as if Valentino’s face is peering out from behind the visor, almost as if to taunt his rivals. By means of the message “I have my eyes on you,” the Italian appeared to be clearly stating his intention to get back in the game.For the first time, we’ll also see the logo of the world’s biggest energy drink on the chin guard and sides of a Rossi replica helmet. The unique and captivating M of Monster Energy is shown in lime-green stylized flames, with white shading around the edges. Vale has been sponsored by Monster Energy since 2009, when he was one of the company’s first European motorsports stars. At that time, the president of Monster Energy said, “‘Striving for greatness’ has always been our motto and we share this belief with a true champion—Rossi.”The Corsa is a supersport helmet that combines the performance of the Pista GP with street-riding characteristics such as adjustable ventilation and improved comfort without having to forgo the performance standards of the GP version. Both Pista GP and Corsa are AGV Extreme Standards Helmets. This innovative process revolutionizes helmet design with the simple aim of demonstrably improving protection, ergonomics, comfort, reliability and environmental impact.Made in Italy and protection of the environment: the Pista GP and Corsa are both designed and made in Italy by highly qualified craftsmen using state-of-the-art technology. Furthermore, both helmets are manufactured using the most efficient technologies developed, with great effort in protecting the environment. Waterjet technology is used to cut the carbon fiber shells, the painting system uses eco-compatible water-based paints, and a dust-suppression/residue-treatment system is in operation throughout the entire factory.A Corsa limited edition replica is now available for $999.95. To order, visit your usual AGV retailer. Distributed in North America through Dainese USA and Parts Unlimited.• Shell: SSL (Super Super Light) in fiberglass, aramid and Carbon fiber
• Shell sizes: 4
• Fabric: Breathable Lycra® and Shalimar with sanitizing treatment
• Liners: Fully removable and washable
• Ventilation system: IVS (Integrated Ventilation System) ventilation with large air ducts on the shell
• Air vents: With open/close mechanism
• Visor mechanism: XQRS (Extra Quick Release System) in metal with swivel opening. Microlock front locking and visor micro-opening system. Quick release system for tool-free removal and replacement of the visor in seconds.
• Visor: Flat RACE, Class 1 optical standard, non-scratch, anti-fog visor (4 layers) with wide field of vision and tear-off strips
• Retention system: Double D
• Removable nose guard
• Removable windproof chin strap protection
• Sizes: XS – S – MS – ML – L – XL – XXL
• Price: $999.95
• InformationAbout AGV
AGV is a premium race and sport helmet manufacturer that researches, projects and commercializes innovative systems for the protection of motorbike riders’ heads. The company that produced the world’s first fiberglass helmet in 1954 now produces helmets following AGV Extreme Standards, a process that has revolutionized helmet design in a way that is demonstrable and measureable in terms of protection, ergonomics and comfort. In 2007, AGV was taken over by Dainese and company president Lino Dainese, whose two companies manufacture protective products that showcase some of the most innovative technologies in action sports and are used by the world’s top riders. AGV is distributed in North America by Dainese USA and Parts Unlimited.