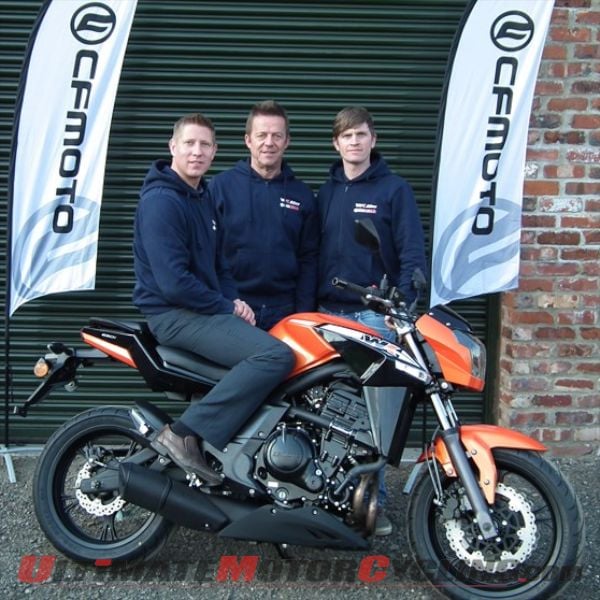 2014 Isle of Man TTWK Bikes is heading to this year’s Isle of Man TT Races fueled by Monster Energy on a positive note with factory support from leading Chinese manufacturer CF Moto.TT frontrunner Gary Johnson will pilot the 650i in the 2014 Lightweight category.The Lincolnshire-based distributor enjoyed maximum exposure at the 2013 edition of the high-profile road race event where its development 650cc machine put in a plus-109mph practice lap in the hands of 33-year-old Johnson.Since that eyebrow-raising outing, the machine has been taken to a new level in terms of race-specific technical development, and will this year be branded as the CF Moto 650i, run by WK Bikes. Such support is not only testament to the strong relationship between manufacturer and distributor, but also underlines international commitment to the prestigious TT.Johnson is no stranger to TT success as, since his debut in 2007, he has enjoyed multi race podiums and a race victory that have seen him earn his place as one of the leading competitors on the Mountain Course.“After getting the chance to ride the CF Moto 650i for a few laps in 2013 on the mountain course circuit, I was pleasantly surprised with its potential,” said Johnson. “As a teams we embarked on a massive development programme over the winter which has seen the race bike move to a far more competitive level. Come race day in June, I hope I can pay everyone back for all their hard work with a result the new bike and team deserve.”WK Bikes’ sales manager Henry Maplethorpe added; “although we didn’t come away with any silverware at our first foray last year, we certainly put WK and CF Moto on the TT map. With that first outing under our corporate belt, we now have the full factory support from CF Moto and so we’re going to the Island with high expectations. Local dyno specialist Chris Gunster has really racked up the hours during the off season, working closely with the team on the bike’s development and we are confident that both bike and rider will be competitive in the 2014 Lightweight class.“Pitting a Chinese manufactured machine against Japanese and European giants has certainly caused a stir and it shows the strength of conviction we have in its reliability, and performance capabilities. This in turn provides confidence to WK dealers and end-user customers.”The 2014 Isle of Man TT runs from Saturday 24th May through to Friday the 6th June, when the Bike Nation Lightweight TT will take place prior to the PokerStars Senior race.Consumer – For further information on WK Bikes call the UK distributor on 01507 522900 or visit www.wkbikes.com