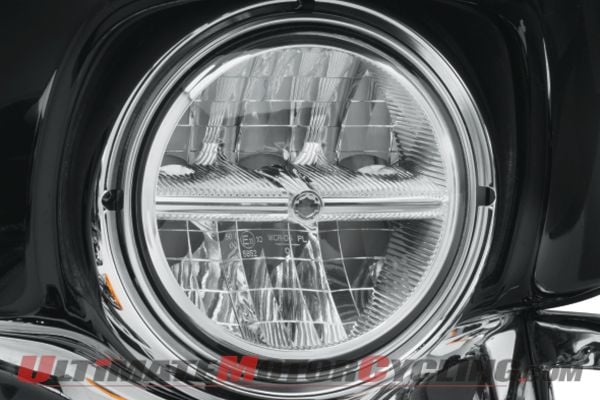 Harley-Davidson LED HeadlampGet the appearance of a halogen filament headlamp with the brilliant performance of LED technology with the new Daymaker Reflector LED Headlamp (P/N 67700173, $424.95) from Harley-Davidson Genuine Motor Parts and Accessories.This headlamp utilizes a mirrored reflector element that looks similar to an incandescent headlamp making the style a nice fit for Harley-Davidson models when the lamp is illuminated or when parked. A powerful low beam illuminates the top half of the lamp to produce a wide pool of general lighting, while the high beam adds focused light from the lower section to punch down the middle of the lane.Being able to see what lies ahead is essential, especially when riding in areas with a large wildlife population. An LED headlamp from Harley-Davidson burns brighter and whiter, projecting daylight brilliance curb to curb and farther down the road than many filament headlamps.The natural “daylight” lamp color is easy on the eyes and amplifies reflective highway signs and lane markers. The long-life, solid-state LED lamps are housed in a sealed, shock- and vibration-resistant assembly that mounts into the existing housing. Installation is simple, and the plug-in lamps require no external ballast or complicated rewiring.The seven-inch Daymaker Reflector LED Headlamp fits 2012-later Switchback, 1992-2013 Touring and Trike models (except Road Glide), and 1994-later FL Softailmodels equipped with the Headlamp Nacelle Kit. A similar Daymaker Reflector LED Headlamp is available for 2014 Touring and Trike models, and some 1991-later Softail models. Daymaker Reflector LED four-inch auxiliary lamps are also available. See an authorized Harley-Davidson dealer for fitment details.