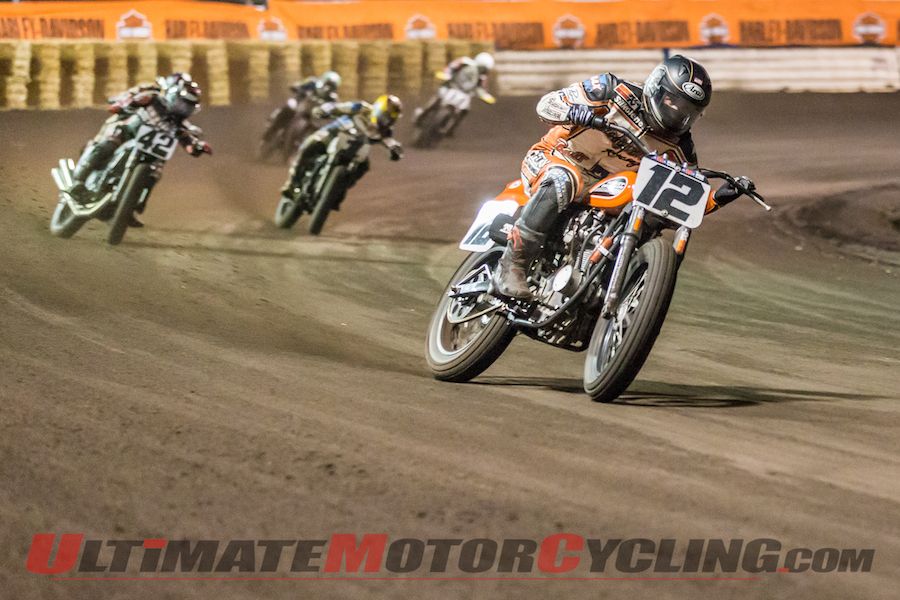 2013 Law Tigers AMA Pro Flat Track FinalsBrad Baker (Dodge Bros Racing/Harley-Davidson) capped off his most remarkable AMA Pro Flat Track presented by J&P Cycles season to date Saturday night.Under the lights at the LA County Fairplex in Pomona, Calif., the Eatonville, Wash., product earned a hard-fought victory in the night’s main event to bring the Law Tigers AMA Pro Flat Track Finals to a close, capturing the coveted No. 1 plate and overall Grand National Championship in the process.Brad Baker says: “That was probably the best race of the entire season right there. Bryan (Smith) and I were going at it the whole time and I couldn’t have asked for a better competitor.  There’s no better way to finish off the championship than with a big win. I really have to thank my team, Dodge Bros Racing, for everything they’ve done for me this season and making all of this possible.”Baker began his dominant march towards sealing the title early. He earned the top spot in afternoon qualifying, won his heat race and then the Dash for Cash before eventually topping archrival Bryan Smith (Crosley Radio/Kawasaki) by .706 seconds at the end of the 25-lap main event.Baker, who for the most part ran a very smooth and impressive race, had one notable mishap that could have very easily cost himself the title on lap five as he went into Turn 2 a little too aggressive.Not only did the bobble force him to sacrifice the lead to Smith for the first time, but the 20-year-old came extremely close to losing control of his motorcycle and going over his handlebars; a wreck that would have surely cost him the championship. Fortunately for Baker, he was able to recover from his mistake and the hard charger fought his way back to the top spot — despite two red flag situations that bunched the field – officially reclaiming the lead from Smith for the final time on lap 13.Baker and Smith’s game plans for the season’s final race couldn’t have been more opposite as the two rode completely different lines going into the turns on nearly every lap. Baker always stayed high while Smith would stay low, trying to get any sort of advantage on the soon-to-be champion.In the end, Smith’s efforts weren’t enough as Baker proved to be too strong of an opponent. Smith’s second-place finish tonight earned him 202 points in the overall standings, enough for him to claim second in the overall Grand National Championship just 17 points back from Baker. Though Smith wasn’t able to overtake Baker in the overall standings, he did manage to obtain the 2013 AMA Pro Expert Twins Championship for the second year in a row. Smith’s two huge wins on mile-long circuits and multiple podium appearances on the back of his powerful Kawasaki EX650 earned him 161 points in the AMA Pro Expert Twins standings.No one conquered more feats this year in AMA Pro Flat Track presented by J&P Cycles than the 2013 AMA Pro Grand National Champion Brad Baker. The 2011 Saddlemen Rookie of the Year earned his first ever win at the GNC Expert level at Hagerstown Speedway after having finished in second-place three consecutive times to begin the season. At 20 years, seven months, and 23 days old, Baker is the fourth-youngest Grand National Champion in the history of the sport.AMA Pro J&P Cycles Pro SinglesJ.R. Addison (Parkinson Bros Racing/Honda) blew away the competition in the final AMA Pro J&P Cycles Pro Singles main event of the 2013 season Saturday night. The Bucyrus, Ohio native won by a convincing 7.236 seconds over second-place finisher and Albion, N.Y. product Ryan Wells (Waters Auto Body/Honda).J.R. Addison says: “This is great to come here and get the win in the last race of the year. It’s definitely a confidence boost going into next year. I got a really strong start and just tried to build on the lead after that. I really took a liking to the track and I have to give a huge thanks to Parkinson Brothers Racing for putting me on a rocket ship tonight.”Aside from Addison’s complete domination over the field, Wells and Mead, Wash.’s Wyatt Maguire (Kirkland Racing/Yamaha) garnered most of the attention as the two entered the final race just five points apart atop the J&P Cycles Pro Singles point standings.In the end, it was Maguire whose fourth-place effort was barely enough to hold off Wells’ second-place finish for the 2013 J&P Cycles Pro Singles title. The final point standings showed Maguire edging out Wells by a single point, 137-136, to win his first professional title in his burgeoning career.Photos by Ara Ashjian