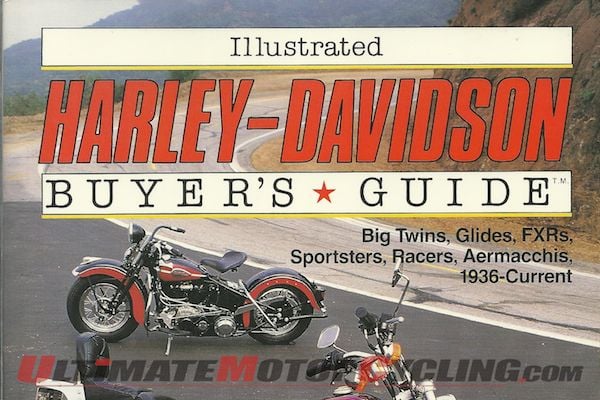 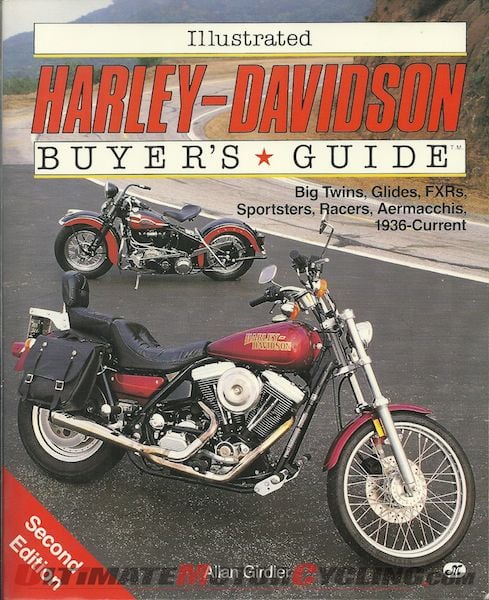 Motorcycle Library Retro ReviewSuppose you get a chance to buy a vintage Harley-Davidson — let’s say a 1967 FLH in “fair” condition. There are questions about the buy, and you are no expert in Harley-Davidson products of that age. You don’t want to walk away from what could be a chance to own a great old bike, but you don’t want to end up owning a money pit with pistons, either. Or maybe you just want to know as much as you can about the breed, including the details most average riders don’t know. You need in-depth resources, and they available in the form of Allan Girdler’s no-nonsense Illustrated Buyer’s Guides for Harley-Davidson.If you’ve looked around lately for books about Harley-Davidson products, you probably have noticed there is no real shortage of titles. But most of those books come at the brand from a historical perspective.This is not the case for Girdler’s Illustrated Buyer’s Guide for Harley-Davidson. Girdler’s books (two editions of Buyer’s Guider) are practical guides on what a prospective used Harley-Davidson buyer or hard-core fan needs to know. You will learn a great deal about the history of the development of The Motor Company’s products, but the approach of both books is to deliver uncommon insight and information. Indeed, in “Illustrated Harley-Davidson Buyer’s Guide, Big Twins, Glides, FXRs, Sportsters, Racers, Aermacchis, 1936-Current (2nd Edition),” Girdler dispatches the notion of that book explaining how to buy ultra-rare, astronomically expensive antique Harleys in its introduction. The subject, as Girdler describes it is, “…Harleys that meet the definition of that lamentably useful word, affordable. We’ll be looking at the new and used models in stores and through your neighborhood shopper or in the classified ads.”Of course, 21 years have elapsed since that book hit the market, which makes the kind of information Girdler provides even more valuable. Information that was relatively current insight then has since aged into uncommon vintage intelligence. Information about some of the bikes considered vintage in 1992 is even rarer now. For example, in Chapter 4 devoted to “Sports and Sportsters,” Girdler relates the potentially problematic quirks of the 1972 to 1974 XLH models. They were equipped with an oil tank that tended to allow oil to slop out if the oil level was checked when hot. Worse, the tank was so close to the chain that there was the potential for the chain to contact the tank under the right circumstances. That kind of information just isn’t in common circulation these days.In 1998, Girdler followed up with his Illustrated Buyer’s Guide Harley-Davidson Since 1965. In that book, Girdler does spend some time on the history of The Motor Company in the book’s introduction, but it’s brief and Girdler quickly gets down to the business of hard facts in the rest of the book.In this edition, contents are organized by year groupings and model; Sportsters 1957-85, FLH, FLT, FLHT 1966-84, Superglides 1971-81, FXR series/Superglide II 1982-83, and then racing bikes 1958-71 in the first half of the book. The second half of the book treats roughly the same topics plus Softails, Dynas, Buell and Twin Cam topics from about 1985 (or the years the series began) through 1998.Contrary to what you might expect, the later book is not just a reshuffled version of the earlier one. There is a lot of information that carries over, and some of the images are the same with new captions of course, but Girdler manages to bring out enough new information to make the two books distinct from each other. And, the 1998 book includes information on models introduced after the 1992 book went to print.In a perfect world, you’d be able to get a copy of both books, but depending on which era and model suits your taste, either may be a great addition to your library.Book Data:Title: Illustrated Buyer’s Guide Harley-Davidson Since 1965
Author: Allan Girdler
Published: 1998
Publisher: MBI Publishing Company, 729 Prospect Ave., PO Box 1, Osceola, WI, 54020-0001, USA
ISBN: 0-7603-0383-5Title: Illustrated Harley-Davidson Buyer’s Guide, Big Twins, Glides, FXRs, Sportsters, Racers, Aermacchis, 1936-Current (2nd Edition)
Author: Allan Girdler
Published: 1992
Publisher: MBI Publishing Company, 729 Prospect Ave., PO Box 1, Osceola, WI, 54020-0001, USA
ISBN: 0-87938-634-7

Note to readers: many of the books that we’ll feature in Rider’s Library may be out of print and some may be difficult to find. That could be half the fun. The Internet should make the search relatively easy but ironically, none of the books currently scheduled for eventual retro-review for the Rider’s Library section were found with the help of the Internet. They all were found at book stores, used book stores, antique shops, motorcycle shops, yard sales and so on.