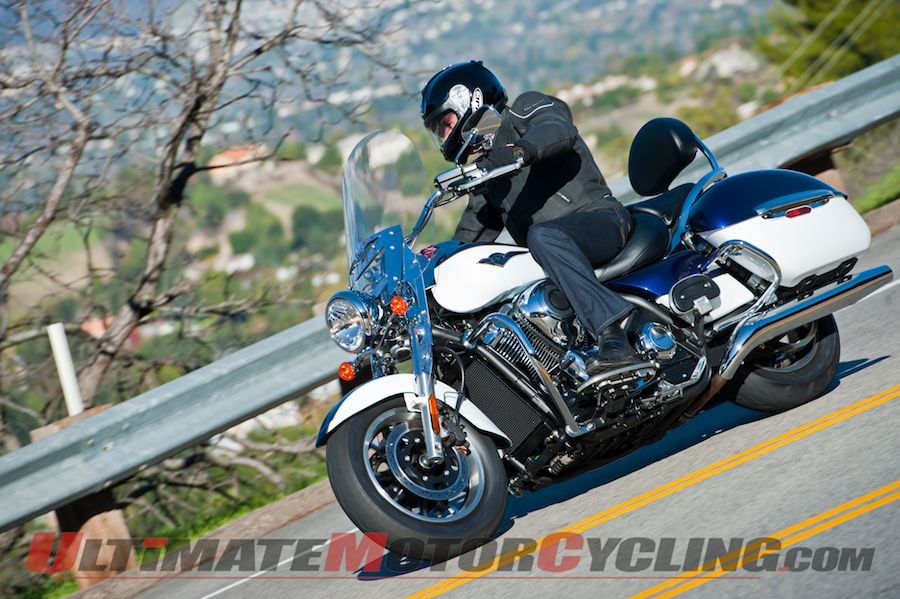 2013 Kawasaki Vulcan 1700 Nomad TestAfter years of effort to break through into the elite of metric cruisers, Kawasaki established itself as a major player with the Vulcan 1700 series.With models that range from the naked fat-tired street-pounding Classic to the elegantly luxurious Voyager tourer, the Vulcan 1700 platform has proven to be versatile and successful.The Nomad takes to the open road with a lighter touch than the faired Vaquero and Voyager, relying on a large two-position windshield to keep the elements at bay, while keeping the flowing lines of the Vulcan 1700 unobscured.The curvaceous appeal of the Nomad starts with the deep front fender and domineering headlight, and ends at the color-matched two-tone hard bags and chrome-accented rear fender and dual exhausts.Much of the Nomad’s success can be attributed to the powerful liquid-cooled, SOHC, 4vpc motor. It’s smooth, as you expect from the metric folks, and it establishes itself as a sporty powerhouse, thanks in part to its nearly square configuration. Revs come easy to the Nomad, and working your way through traffic, over mountain ranges, or through the canyons can be accomplished aggressively.Even with its revability, the Nomad is strong off the bottom. It cranks out a massive 108 ft/lbs of torque at 2750 rpm, and that means you don’t have to shift the six-speed transmission out of overdrive to pass, even when fully loaded and two-up.Coming from a sport-oriented company, the Nomad is a competent handler on twisting roads. It is happy to adjust in corners, despite its kicked out 30-degrees of rake and mid-size 65.6-inch wheelbase. The perfect ergonomics help here, giving the rider the confidence needed to put the Nomad where he wants it to be. Get yourself into a spot of trouble, and the triple 300mm discs will slow things down promptly.Little creature comforts, such as a clever neutral-finder at stops, floorboards and a backrest for the passenger, plus electronic cruise control, add to the superb package that makes the Kawasaki Vulcan 1700 Nomad the great bagger you might not have considered.