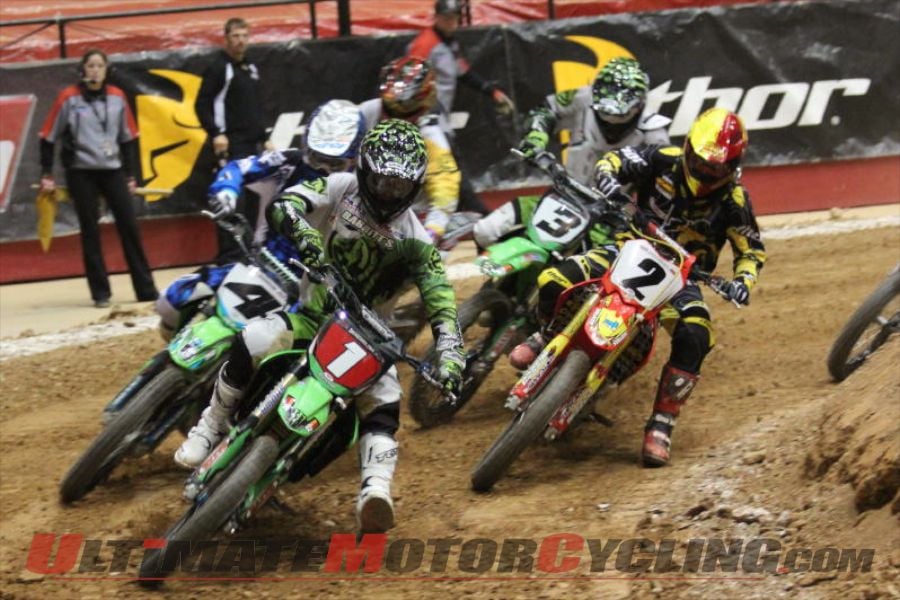 AMA Arenacross In just a matter of hours, the third round of the 2012 AMA Arenacross Series season will commence from the Alliant Energy Center in Madison, Wis.Friday night marks the first of back-to-back evenings of competition for the talented pros in the Arenacross and Arenacross Lites classes, while also signifying the pending conclusion of the first quarter of the 2012 championship.The revamped 12-race season will take a month long break from racing before taking back to the track on the second weekend in December from Wilkes Barre, Pa.Through two rounds of action and three races, the competition within the series has been exceptional. Practice times are closer than the series has ever seen, with less than a second regularly separating the top-20 riders in the field.Additionally, the elimination heats and main events have produced the trademark excitement and fireworks that the AMA Arenacross Series is known for, resulting in a handful of different riders running at the front of the field and a pair of winners in those three races.Currently, Babbitt’s Monster Energy/AMSOIL Kawasaki presented by Maxxis’ Tyler Bowers leads the way with two wins and three podium results. He holds a nine-point advantage over FMF Power/Poynt TUF Honda’s Jeff Gibson in the standings, with Gibson coming off his first win of the year last Saturday night. Bowers’ Babbitt’s Monster Energy/AMSOIL Kawasaki teammate of Josh Demuth sits third, just one additional point back.While it remains to be seen what kind of drama will be produced this weekend, beginning with tonight’s main event, the looming break from competition will be a welcome sight for riders still looking to dial in their efforts this season.With such a strong start to their championship campaigns, one would think that Bowers, Gibson and Demuth would love to continue racing. With such a strong wave of momentum working in their favor and confidence at its peak, stopping the forward progress is less than ideal. It has been said that you need to strike when the iron is hot, and for these three riders, that is exactly the case.On the flip side, for riders like Chad Johnson, Kelly Smith, Zach Ames and Cole Siebler, the early break is a great opportunity to reset and come into the fourth round of the season fresh and raring to go. Each of these four riders has experienced his own adversity already in this young season, and the chance to clear their mind of it all will bode well in their continued effort to fight their way back into the championship picture.Moreover, for the fans, the pending break presents a great opportunity to see the riders start fresh and rejuvenated in December. While what’s done is done, the season is still a long way from being over and including the pair of races slated for this weekend, there are still 16 main events ahead that could alter the championship landscape in any number of ways.Bottom line, the on-track action in this young 2012 AMA Arenacross Series season has been exceptional, and with the chance for each and every rider in the field to continue to dial in his program and reach his true pinnacle of performance between rounds, it will only get better. The stage has been set for an epic season of competition, and in time, it will all begin to unfold.This weekend, the AMA Arenacross Series returns to the bustling city of Madison, Wis., for the first time in almost a decade. Known for its love for sports and the University of Wisconsin, the “Badger State” and this high-energy city serve as an ideal setting for the high-octane excitement of arenacross.Veterans Memorial Coliseum, on the campus of the Alliant Energy Center, will host the world’s most intimate form of racing over the course of two nights. The venue has been a staple of various sporting events throughout the years, including Wisconsin Badgers Hockey, state basketball and hockey tournaments, as well as arena football. Over 10,000 fans can fill the arena for any given event, and the venue is sure to be rocking this weekend once the thunder of motorcycles makes its anticipated return to Madison.The third round of the 2012 AMA Arenacross Series kicks off tonight, with an action-packed evening of competition, and concludes Saturday, November 12, with yet another night of action. The show, for both Friday and Saturday, begins at 7 p.m. EDT.Live timing and scoring from each round of the AMA Arenacross Series returns for the 2012 season! To follow the intense racing action live, log onto Arenacross.com.