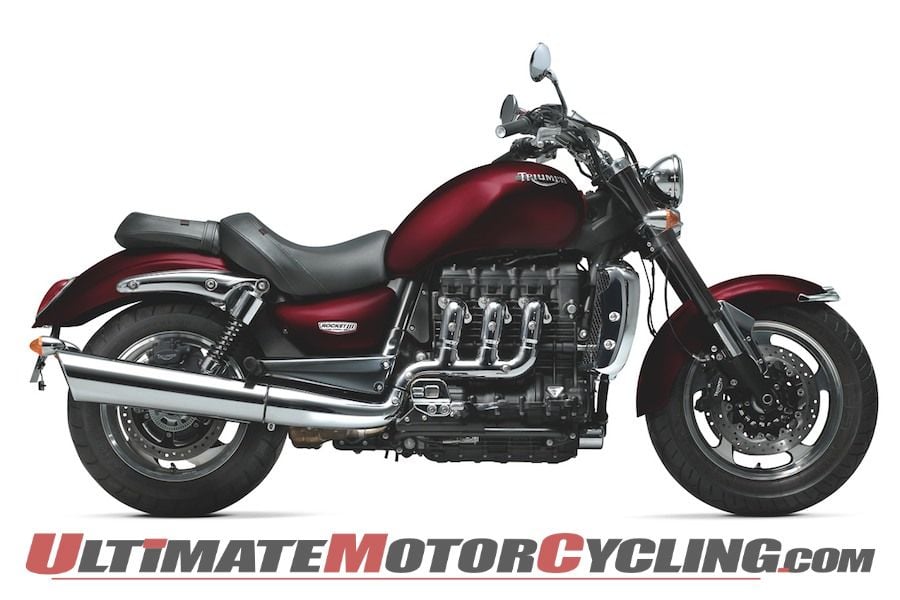 The Triumph Rocket III Roadster is a big machine and, although the weight is carried low, at a claimed 807 pounds wet, it is also heavy. However, the long pullback handlebars make for comfortable, upright ergonomics.The low slung seat and huge gas tank rising up in front give the rider a solid, seated-in impression, and that’s just as well, because you will need to be securely attached if you plan on opening the throttle.Folding footpegs mounted amidships allow the Rocket Roadster more-than-adequate ground clearance in the turns; it is possible to scrape them, but you have to be trying fairly hard to do so. 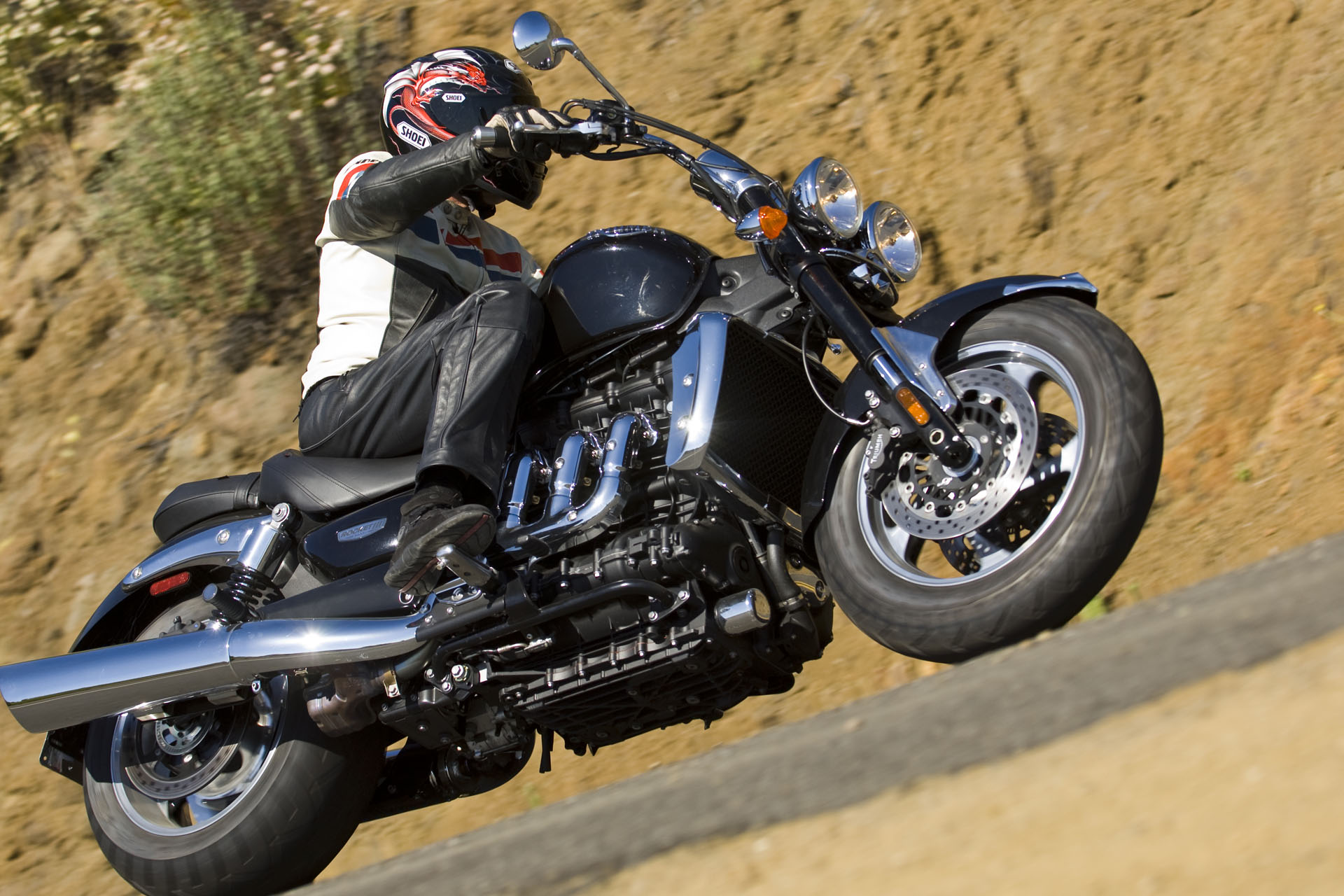 While the 43mm male-slider forks and twin Kayaba shocks offer no damping adjustability, the Roadster’s overall handling is a revelation. A porcine motorcycle with a 240mm rear tire and shaft drive would not normally make for an agile performer.Fortunately, the Roadster’s low-slung weight and wide bars means the machine responds enthusiastically and predictably through corners. The big front 150mm footprint increased confidence and I found myself pushing the Roadster more than it was probably designed for. The Roaster handled abuse on twisty canyon roads far better than I expected; this is an enjoyable motorcycle to ride hard. The Nissin four-pot brakes are non-radial, so the twin drilled-rotors require a decent squeeze to slow everything down from high-speed.However, they do have plenty of feel and work well enough, and the standard ABS is nice insurance to carry when trying to slow down a behemoth like the Roadster.Still, the Triumph’s raison d’être is, of course, the motor. At 2294cc, it is the largest displacement production motorcycle engine available and, although the longitudinally mounted triple looks suspiciously like a refugee from the John Deere catalog, Triumph has succeeded to some degree in making it look good. But, ultimately, that’s not the point.Claiming a 15-percent power increase over the Classic (now discontinued) and Touring Rocket III models, and despite a relatively modest 122 peak horsepower compared to the VMax, the Roadster’s incredible 147 ft/lbs of rear wheel torque gives this “cruiser” its staggering level of thrust.Considering Harley’s Twin Cam 96 motor-itself a strong, torquey performer-churns out a healthy 85 ft/lbs of torque at the rear wheel, it rather puts the Triumph’s astonishing motor in perspective. Even more remarkable still, the Rocket III Roadster cranks out some 130 ft/lbs of torque just off idle at a mere 1500 rpm!By 2000 rpm, the torque has moved to 142 ft/lbs, and then peaks only 500 rpm later, staying strong through to the modest redline.With its jaw-dropping acceleration my Roadster rides became a series of freeway on-ramp experiments that were purely self-indulgent fun. The big triple’s flywheel inertia means that it revs more deliberately than the VMax, but the motor builds momentum rapidly irrespective of which gear you are in; it is intoxicating and highly addictive.Paradoxically, despite all this amazing power, the throttle connection is smooth and intuitive, and the Roadster is docile enough that it is easy to ride.The motor’s vibes are well contained and the fuel injection is precisely mapped so that lurching is kept to a minimum; I am impressed at how smoothly the Roadster attacks tight and twisty canyon roads almost as capably as it blasts along arrow-straight highways.2011 Triumph Rocket III Roadster | Motorcycle Specs