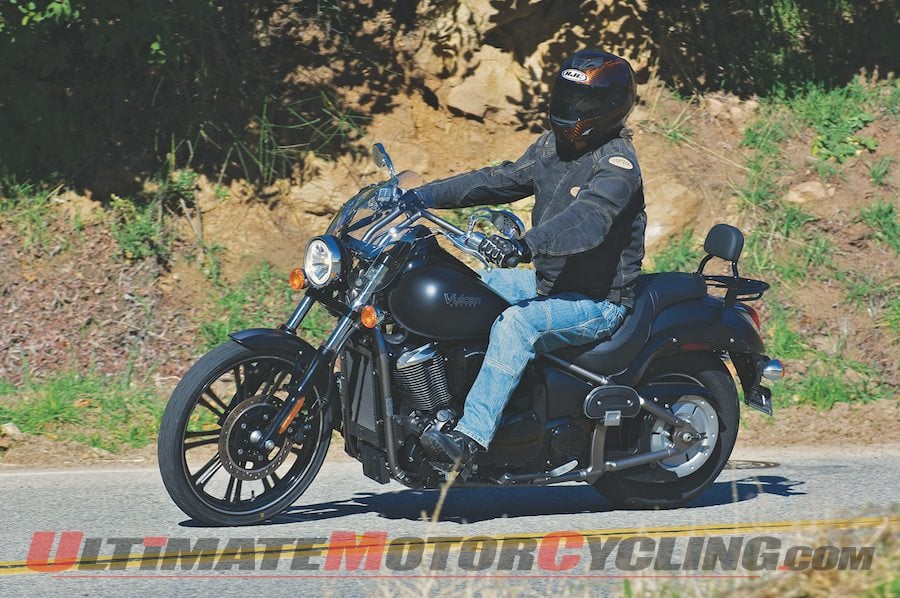 One can easily dismiss mid-size cruisers such as the 2010 Kawasaki Vulcan 900 Custom Special Edition. They point to the liquid-cooled 903cc V-twin motor and scoff at its “diminutive” size, as if 96 cubic inches is the minimum required for a “real” cruiser. Fortunately, Kawasaki has done quite a bit with “only” 55 cubic inches, putting together a stylish cruiser with performance that belies its displacement. The Special Edition of the 2010 Kawasaki Vulcan 900 Custom goes black, with a blacked-out motor (with glistening highlights), wheels, tank, forks, and paint–the only major parts that remain chromed are the dual exhausts. It is a grown-up, bad-boy look that establishes some decent street cred for the 900. You don’t see the engine size brightly displayed, so most onlookers will have no idea that you are not on a more “serious” cruiser.Other riders will definitely think you’re up to something in the canyons. The Kawasaki liquid-cooled, oversquare, overhead cam, four-valve V-twin is agile, revving quickly in response to rider input. The twin-body Keihin fuel injection system works perfectly, and maximum torque (claimed 58 ft/lbs) is doled out early–at 3500 rpm. Feel free to rev right past that for satisfying acceleration in-town or out.A chassis that is ready and willing to slice through the corners matches the Vulcan 900’s lively motor, and its claimed curb weight of 611 pounds doesn’t hurt, either. The 21-inch front wheel keeps the steering light, and the 180 rear tire (on a short 15-inch rim) does not hinder direction changes. Sure, the motorcycle will drag, but it has a decent lean angle and the Dunlop tires take it to the limit without drama.At 33 degrees of rake–just a degree less than a Harley-Davidson Dyna Wide Glide–there is plenty of attitude. Yet, steering is far more accurate than you would expect. Thank the short wheelbase (3.5 inches shorter than the aforementioned Wide Glide), the motorcycle’s relatively lightweight, and the reduced gyroscopic effect of the smaller motor. Big is great–especially when riding two-up and/or long distances–but smaller has its advantages.Being a Japanese motorcycle, you know there was no skimping on the Kawasaki Vulcan 900 Custom’s suspension. The 41mm forks have almost six inches of travel, and the hidden-shock rear suspension moves the wheel over four inches. The suspension action is well behaved. A belt drive is quiet and requires virtually no maintenance.The brakes are adequate and predictable, but nothing to write home about. There’s a 300mm single disc in the front and 270 in the stern. The geometry of the 900 Custom allows use of the front disc, so you slow down predictably, though you have to give it a decent squeeze.Ergonomically, the 2010 Vulcan 900 Custom has the feet-forward positioning you would expect, and the bars pull back comfortably (they have odd, build-in risers and no traditional handlebar clamp). The seat has a wide dish and tail support, so you don’t have to hang on for dear life when hitting the throttle hard. The engine is balanced; hard-core riders would certainly complain that it is too balanced, and the sound emitted from the dual slash-cut mufflers is not going to turn any heads. All-day rides on this motorcycle are no problem, whether in-town (thanks to the low seat height) or on the open road.We hit the Kawasaki Accessories catalog and added a custom stitched seat cover, blacked-out backrest/luggage rack combo, billet mirrors, mini tachometer, passenger floorboards, and a café windshield.Now, many cruiser accessories are more show than go, but that is not always the case here. With the peppy Vulcan 900 motor, a backrest for the passenger is not a bad idea, especially considering the abbreviated perch. And, of course, if you need to carry something and don’t want a backpack, the small rack is useful and fairly subtle in black. The café windshield is functional on the freeway, though I am not sold on how it fits in visually with the rest of the motorcycle. If I wanted to tour with the Kawasaki Vulcan 900, I would get the LT rather than the custom.The mini tachometer mounts right in front of your face, but I never needed it. Even though the Kawasaki 900 is quick-revving, I rarely hit the limiter. And, if you do, it’s a soft hit–simply upshift the slick five-speed transmission to solve the problem. I suppose it could be useful to a new rider, but he should be looking at the road rather than the dials. The Vulcan passenger floorboards are a very nice touch, adding a bit of security and comfort to the rider in the back. I like the shape of the Vulcan billet mirrors more than the standard round stockers, so I think they are a nice addition, both visually and from a practical standpoint. Of course, the seat cover looks great, though only when parked, for obvious reasons.When considering the 2010 Kawasaki Vulcan 900 Custom Special Edition, it’s all about evaluating your needs. If big is required to satisfy your soul, there are plenty of motorcycles out there. Kawasaki makes a Vulcan 2000 for the displacement-obsessed. While the Special Edition is a good-looking motorcycle, it is not going to garner attention like a Harley or Victory. However, if riding is your #1 priority on a cruiser, you may be surprised at just how satisfying 903cc can be.Action photography by Kelly CallanRiding Style
Helmet: HJC FS-15 Carbon
Jacket: Cortech DSX Denim
Gloves: Cortech Accelerator
Pants: Cortech Mod Denim
Boots: Tourmaster Nomad