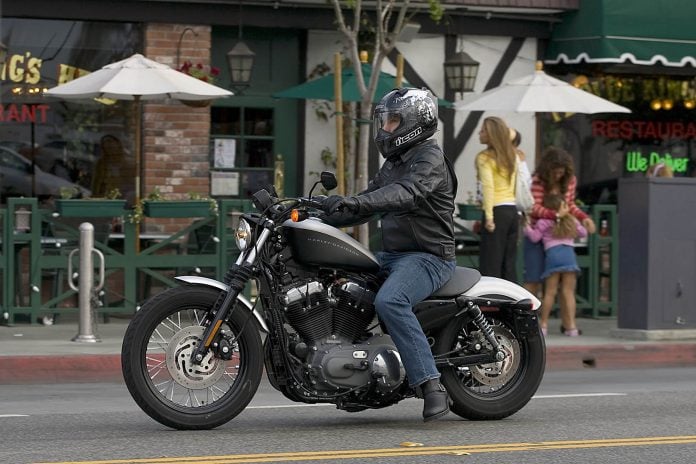 Bobbed and SlammedThe Harley-Davidson Sportster hit the Big Five-O this year, and the senior-most Harley nameplate is showing its age. Graying and sedate compared to the big Twin-Cam 96 powered studs roaring out of Milwaukee these days, the middle-aged Sporty has been in need of a wardrobe consultant and a handful of Viagra for some time. Fortunately, the brooding, black-clad Nightster has swaggered into the Sportster’s Golden Jubilee, fashionably late and looking for trouble.

The bobbed, slammed, and nearly chrome-less Nightster looks to be a smart play for Harley-Davidson, whose average rider is just four years younger than the Sportster itself. An atavistic nod to the post-World War II G.I. bobber tradition, the Nightster seethes with stripped-down attitude aimed at young riders who are looking for a bike that is more bar-hopping badass than flashy, rolling FICO score. Fitting then, that Willie G. Davidson would pluck 27-year-old Rich Christoph from H-D’s design ranks to give the Sporty a rebel transfusion. The kid has certainly delivered the goods. The villainous-looking Nightster could be booked on “Disorderly Conduct” without getting off its kickstand.The theme of questionable legality begins with the Nightster’s clean, bobbed tail section. The side-mounted, fold-away license plate and apparent “missing taillight” would be enough to keep a cop flipping through the vehicle code for an hour. Of course, rebellion begins at home. Many within the conservative Motor Company were jittery about a configuration that, in lieu of the traditional center-mount taillight, combines the stoplight function with the turn signal lamps. Eventually, with Willie G’s support, the illicit-looking rear end that is key to the Nightster’s shady character was given the green light. Score one for the bad boys.

Hoodlum vibe is scrawled all over the bike’s mug shot. From the bullet-hole riddled belt guard and front fender clamps to the blacked-out and gaitered front forks, every detail on the Nightster is designed to arouse suspicion. Except for the slash-cut dual shorties, the Nightster has been almost completely de-chromed and oozes matted-out Rat Rod character. Black, laced wheels and black low-rise handlebars with aftermarket-looking mirrors are among the numerous gleam-averse touches. Even the gas cap and dipstick cover are polish-resistant satin silver.A nice contrast to the hard-boiled aesthetic is the gas tank’s subtle orange pinstripe, which blends into the solo seat’s stitch pattern, giving the Nightster a handmade look. The 1200 Evolution motor powering the Sportster line has been powder-coated industrial gray with black treatments. The transmission and airbox have also been given the leaden, no-frills treatment.For those accustomed to bigger-boned Harleys, dropping into the Nightster’s low-slung 25.3-inch low seat and lifting your boots onto the mid-mount controls is a little like returning to your sixth-grade classroom and squeezing into your old desk. But, the compact riding position does begin to feel natural once you pull away from the curb and roll on the rubber-mounted Evolution’s plentiful low-end torque. The dropped center of gravity allows you to toss the 565-pound Nightster around like Robert Mitchum working over a mouthy punk.2007 is the first year that fuel injection has trickled down to the entry-level Sportster line, and the update has reinvigorated the air-cooled V-Twin mill. The signature arrhythmic idle is still there, but the Evo is now enviro-friendly as well as being quicker off the line and more aggressive throughout the throttle range. High-flow cylinder heads allow a 9.7:1 compression ratio and increased power, even in higher gears. While the Nightster is no V-Rod, the combination of punching power and nimble footwork make the Nightster an exceptionally capable street scrapper.That said, the Nightster’s flinty good looks come at a price. The ultra-low seat height and slammed rear end cut suspension travel to just 2.4 inches, resulting in frequent pothole-related ass-kickings. Coupled with the minimally padded roost, the jarring effect will have riders on their pegs when traversing some of the Metropolitan area’s more neglected roadways. Larger riders will be looking to Progressive Suspension for a shock upgrade. Quickly.Slicing canyon roads on the Nightster, however, is an unexpected joy. The bike’s power and agility encourage aggressive throttling through turns, although the front end occasionally seems unsure when pushed through uphill twists. Brakes are what you would expect on a stripped-to-the-waist thug. The dual-piston front and single-piston rear receive no complaints, but you will be leaning on your foot more often than expected during quick stops.For the generation now entering the cruiser market, the pendulum appears to be swinging away from baroque chrome gorillas to stripped, noir workhorses that evoke an era when fighter pilots returning home from the war wanted to go fast, stop fast and not much else—witness the success of Harley’s earlier take on the genre, the fundamentalist matte black Street Bob. The Harley-Davidson Nightster effectively refines that disobedient philosophy. Blunt, aggressive, and offering an unembellished motorcycle experience, the Nightster brings in the New Dark Age—and this time, it comes in two-tone.RIDING STYLE
Helmet: Icon Decay Domain
Jacket: Spidi City Survivor
Gloves: Tourmaster Summer Elite
Jeans: Lucky Brand 181 Bootleg
Boots: Harley-Davidson Phantom