Surely, every ride on a motorcycle is an adventure. It is a rediscovery of the temperature of the atmosphere, the intensity of the breeze, the angle of the sun and the texture of the highway. How, then, is it possible that some motorcycles have the title “Adventure Bike” conferred upon them, as if they provide an exclusive insight into an excursion?Perhaps it is an adventure bike’s ability to perform a wide variety of duties, something that escapes many of the narrowly focused motorcycles offered to the riding public. Certainly, it is the ability to not only tackle the tarmac, but also to answer the beckoning question: What is down that dirt road?Some adventure bikes are more adventurous than others, always struggling to find that critical balance between road-going comfort and dirt-worthiness. The Aprilia ETV 1000 Caponord earns its street-going credibility thanks to a Mille-based 60-degree V-twin motor and generous fairing, while it primes itself for rougher roads with about seven inches of suspension travel, wide handlebars, and a full-coverage plastic rock guard for the engine’s soft white underbelly. 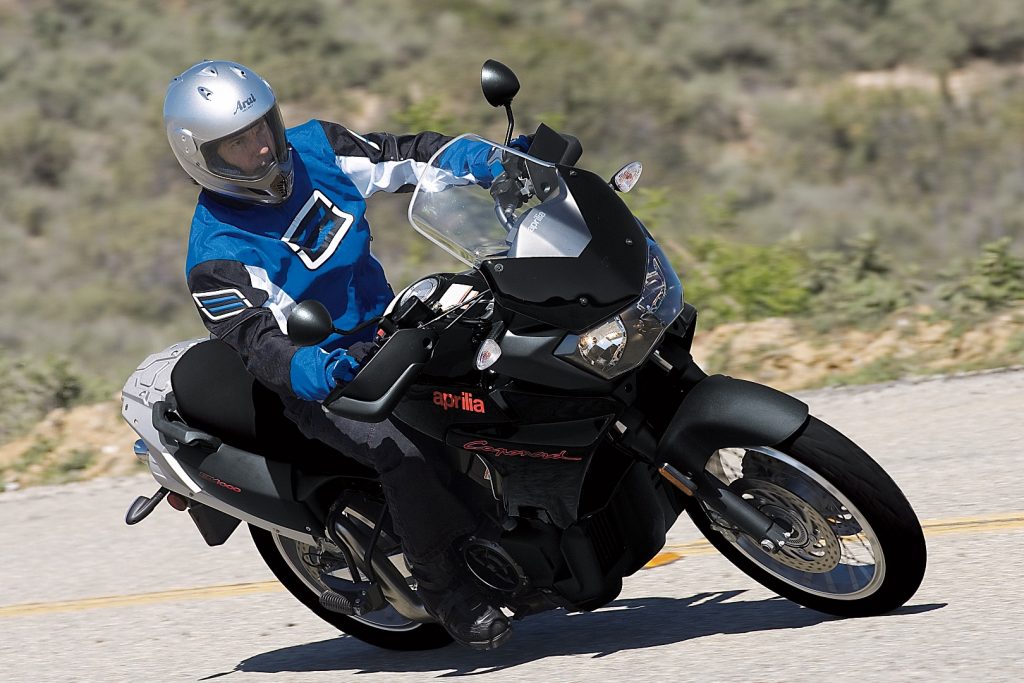 As a liter-bike tipping the scales on the high side of 500 pounds, the Aprilia Caponord has no choice but to orient itself toward street riding. It is the nature of the beast, but this does not mean that intriguing unpaved roads are forbidden fruit, as they are for a pure sport, touring, or cruising bike. Rather, the combination of street tires with the motorcycle’s considerable heft and breadth demands that the terrain be given due respect.Unlike a dirt bike, a tip-over on an adventure bike is not an inconsequential occurrence—damage will be inflicted, and then there is the non-trivial issue of bringing the bike back upright. In spite of that, the Caponord confidently positions itself as a motorcycle that is pleasurable on every type of road, from ruler-straight interstates to that dashed line on a map that indicates unknown conditions.A relatively low seat height and high-rise bars give the Aprilia Caponord a unique “adventure cruising” seating position. Initially, the tallish bars felt alien; our natural desire was to lean a bit farther forward and our inclination was that our hands should be in closer proximity to each other. That feeling vanished before the first consumption of the generous 6.6-gallon fuel tank had been accomplished. Though the riding position concocted by Aprilia may seem graceless for any single type of riding, it has a collective feel that enhances the Caponord’s versatility.Clearly, the natural habitat of this machine is a poorly maintained paved road that rewards a seamlessly adapting motorcycle. This is where the long travel suspension—Marzocchi front, Sachs rear—earns its keep. Potholes are unsuccessful in deterring the 19-inch front Bridgestone Trail Wing tire, and the nearly six-inch wide rear tire supplies a reliable contact patch. The tubeless tires make it possible to reduce tire pressure for dirt excursions, increasing traction without any tube-destroying side effects. Interestingly, the tires are mounted on patented spoked rims that are hollow, which reduces unwanted unsprung weight.Few 2006 Aprilia Caponord riders will complain when road conditions improve. One could reasonably expect that a motorcycle with long, plush travel would wallow when pushed into turns, but that is simply not the case. Adequate damping (adjustable in the rear) allows the Aprilia to maintain its composure during fast cruising on canyon roads.The Caponord will never disguise itself as a pure sportbike, but it handles well enough to keep up with more reasonably aggressive riders. The box-section, twin-spar aluminum frame is mated to an aluminum/magnesium alloy swingarm for a focus on both light weight and torsional rigidity.Sub-triple-digit sprints on your least favorite interstate are of no concern for the Caponord. A relatively tall windshield does an admirable job of protecting the rider from the incoming blast, as do the plastic hand guards that are, technically, brush guards. On the open road, the Caponord can be confidently clicked into sixth gear for a fast-yet-smooth cruising speed. An elegantly lit blue-and-red instrument panel is easy to decipher, either before or after dark.In traffic, a different story emerges. Despite its displacement of 499cc per cylinder, the Aprilia motor is no torquer. For passing, the motor insists that it be kept above 4000 rpm; below that engine speed, roll-on acceleration is lackluster at best, as Aprilia claims maximum torque at 6500 rpm. Once spun up though, the Caponord has nearly 98 horsepower to play with, so you can assertively watch the traffic disappear quite clearly in the well-placed, vibration-free mirrors.Also worthy of note is the lack of engine braking when rolling off the throttle. The motor boasts a 10.4:1 compression ratio, necessitating premium fuel, so the responsibility can be placed on a light flywheel and a peculiarity in the fuel injection system. Fortunately, the Brembo brakes and Freudenberg brake lines are up to the task of retarding the Aprilia Caponord’s progress, though braking is always a more challenging proposition when not fully assisted by the engine.Living successfully with the 2006 Aprilia Caponord is a matter of recognizing just what kind of adventure it likes to embark upon. Those plans for long off-road excursions will probably get saved for another bike, while some of the paved roads less traveled will move up to “must-ride” status on what may become a frequently chosen bike in your stable.Photography by Kevin WingRIDING STYLE
Helmet: Arai XD (DC)
Jacket: Shift M1 Ballistic
Gloves: Shift Hybrid X
Pants: Shift Denim Kevlar Street
Boots: Icon Field Armor