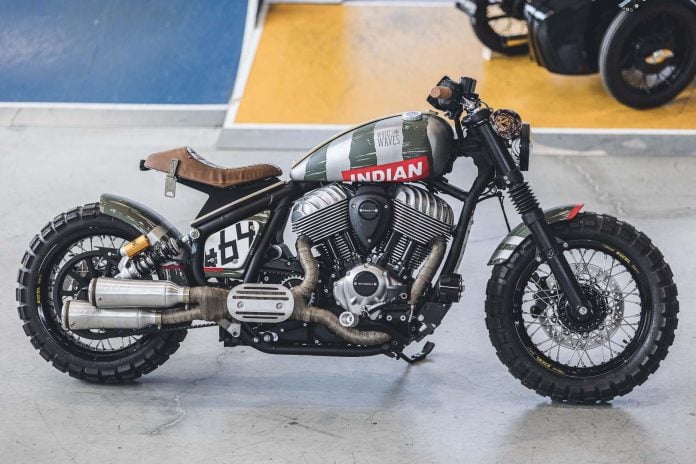 Indian Motorcycle has an impressively aggressive initiative to promote custom builds of its various V-twins. The Tank Machine x Rise Designs Grind Machine is the result of Indian working with Wheels and Waves, a moto festival originating in Biarritz, on the Bay of Biscay coast in French Basque country.Tank Machine, based in Paris and owned by Clément Molina, produces kits and individual parts for BMW, Suzuki, and Indian owners to simplify customizing their rides. Although Tank Machine has kits for FTR and Scouts, you have to go it alone with Tank Machine’s custom parts for Chiefs. 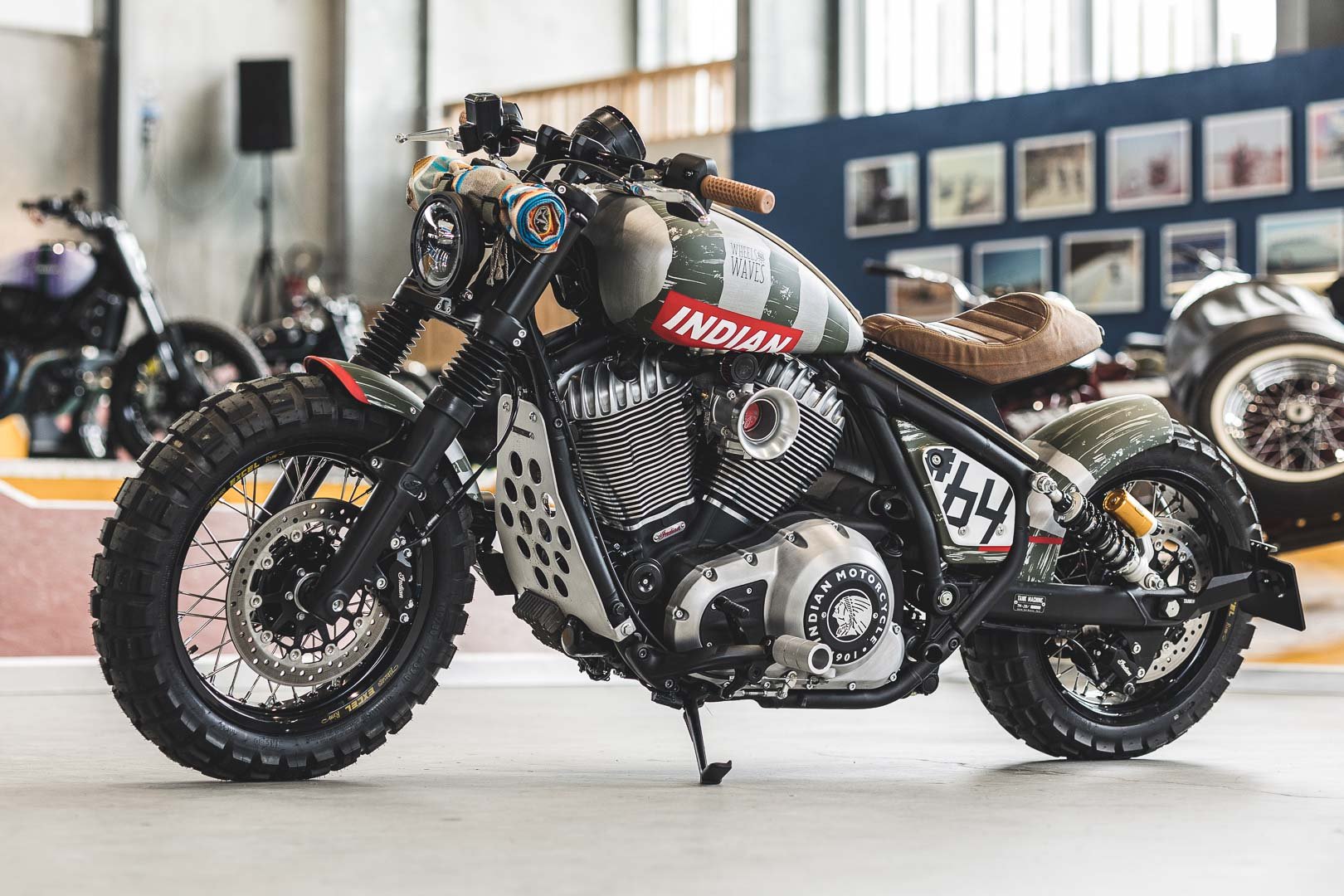 “There are so many nice pieces of the stock bike, especially the central and most beautiful piece—the engine,” Molina explains. “The Indian Chief is really easy to strip back to a great base, and the idea was to remove a lot of things, keep only the essentials, and then build back up with a different balance, adding details that really change up the look of the final machine.”The other half of the “x” equation is Rise Designs, a French design company based in Boron, near the Swiss border. Ride Designs’ Antonin Bazin brought a skateboarder sensibility to the liaison. Bazin’s influence can be seen in both sublime and subtle ways. 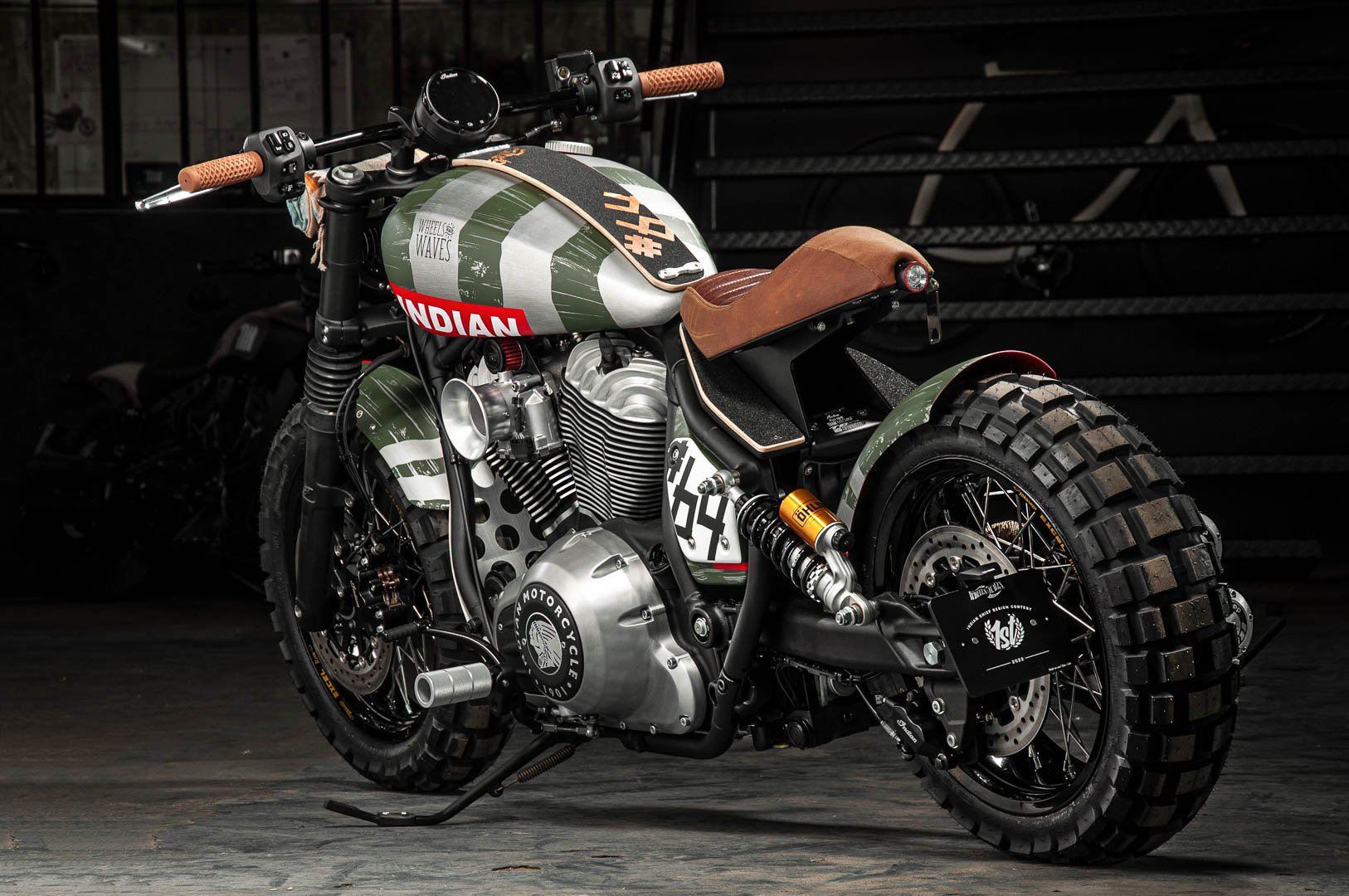 Grind Machine has a familiar post-apocalyptic sensibility, with Continental Twinduro TKC 80 tires—140 front, 180 rear—mounted on 17-inch Excel wire-spoked rims. Wider handlebars with Vans BMX waffle grips and footpegs inspired by BMX grind pegs are brought to the build by Bazin. The waxed brown leather seat is a custom design by Tank Machine, adding bobber flavor to the recipe.The drilled-out aluminum engine guard gets a brushed finish, matching the exhaust heat shield—two touches by Bazin. The stock exhaust system is wrapped until it reaches the race-ready SuperTrapp mufflers. Öhlins piggyback-reservoir shocks show that Grind Machine is more than just a looker. Grind Machine is ready for an era when roads may no longer exist as we know them, with PIAA lighting the way. 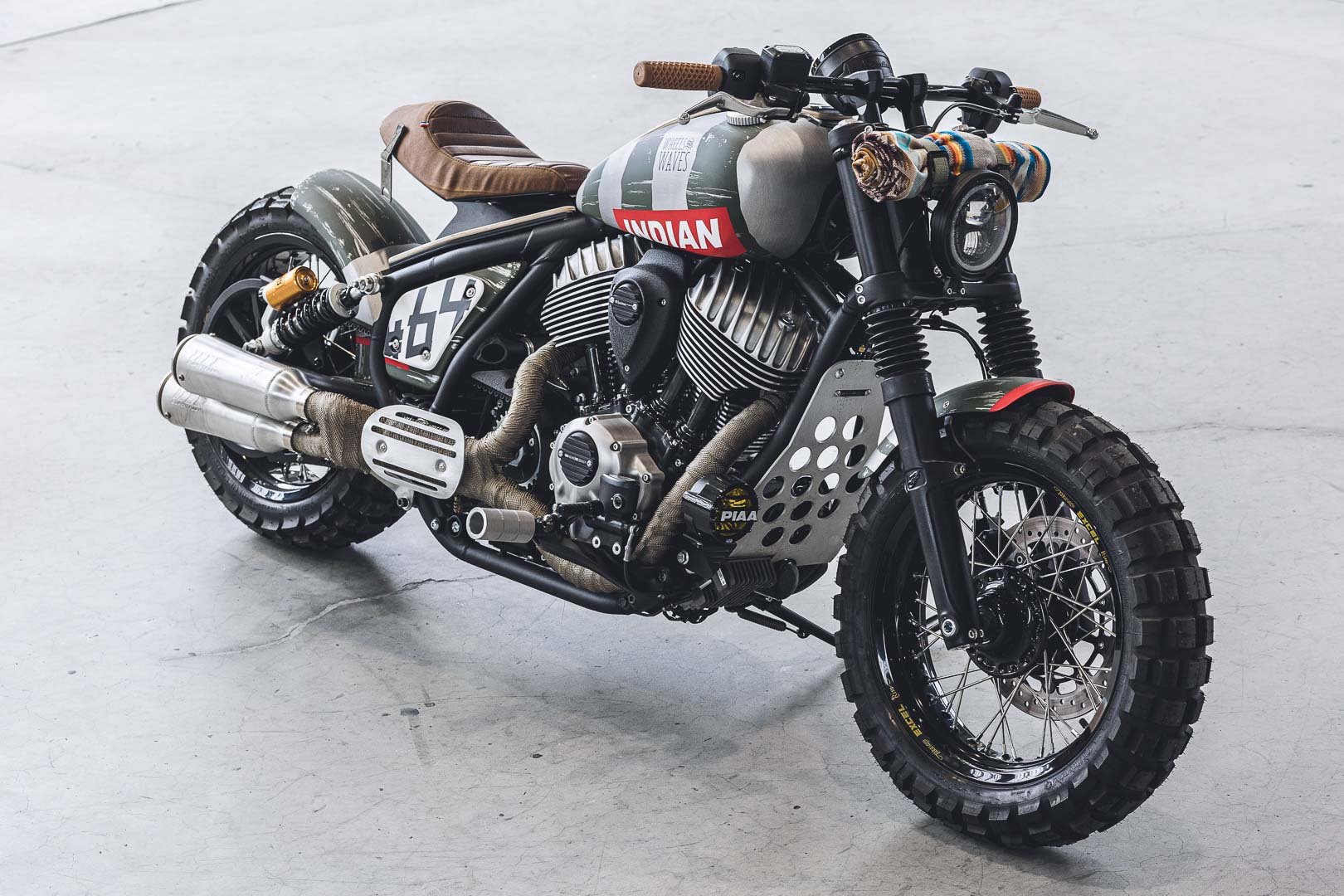 Grind Machine’s fuel tank is a story of its own, with Rise Designs playing an essential part. Weathered green stripes sporting red accents were applied over a brushed metal base. The custom fuel cap is CNC-machined. Wood skateboard decks get a novel use—the wood was bent to form a top-center guard for the generous Indian fuel tank.Deck wood is also used as a base for the seat unit, with mounting brackets that offer a tip o’ the cap to skateboard trucks. Grip tape on the skateboard decks adds texture to the look—literally and figuratively. 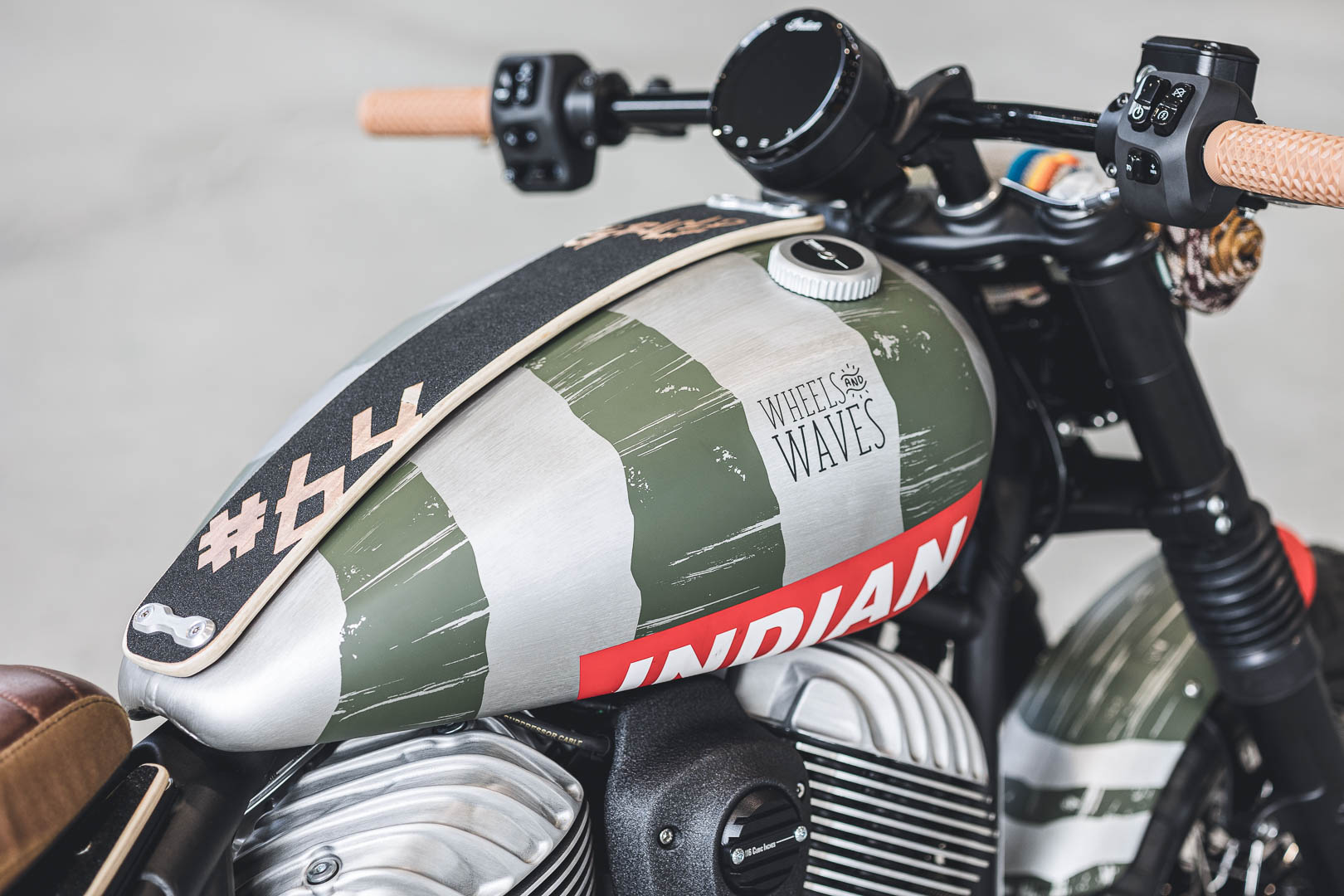 Details can make or break a custom build, and Grind Machine acquits itself nicely. We would like to direct you to the bottle-opener on the back right quadrant of the seat, the custom bell housing with a graphically enhanced red throttle valve, sliced primary drive cover, various inscribed covers from the engine to the pulley belt guard, and appropriately bobbed fenders.Grind Machine was built in just three months, yet no corners were cut. “The process was so enjoyable—thinking about the bike, the details, working with different materials like skateboard decks, fabricating new parts, and then fine-tuning everything,” Molina recalls. “As a specialist that loves working on bikes from Indian Motorcycle, I was really enthusiastic about the opportunity, only heightened by the partnership with Wheels and Waves, an event that I enjoy so much.”We are certainly enthralled with the results, as it enhances the Indian Chief’s natural muscularity, while the Tank Machine x Rise Designs Grind Machine remains enticingly rideable.