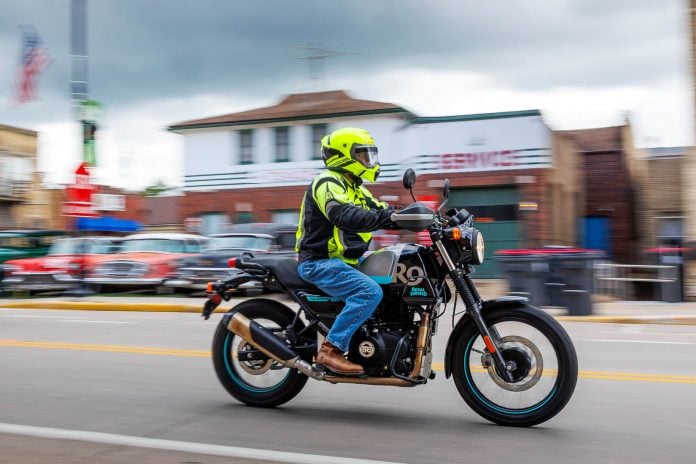 Over the years, there has been the philosophy in the motorcycle industry that “more is better.” The proof of that has been particularly noticeable in the upward trends toward ever-greater horsepower, and more technical complexity in terms of electronics—ride modes, wheelie control, traction control, you name it. In the design of the new 2023 Royal Enfield Scram 411, the script has been flipped to read, “Less is more.” That makes sense, given the target market and purpose the Scram is designed for. 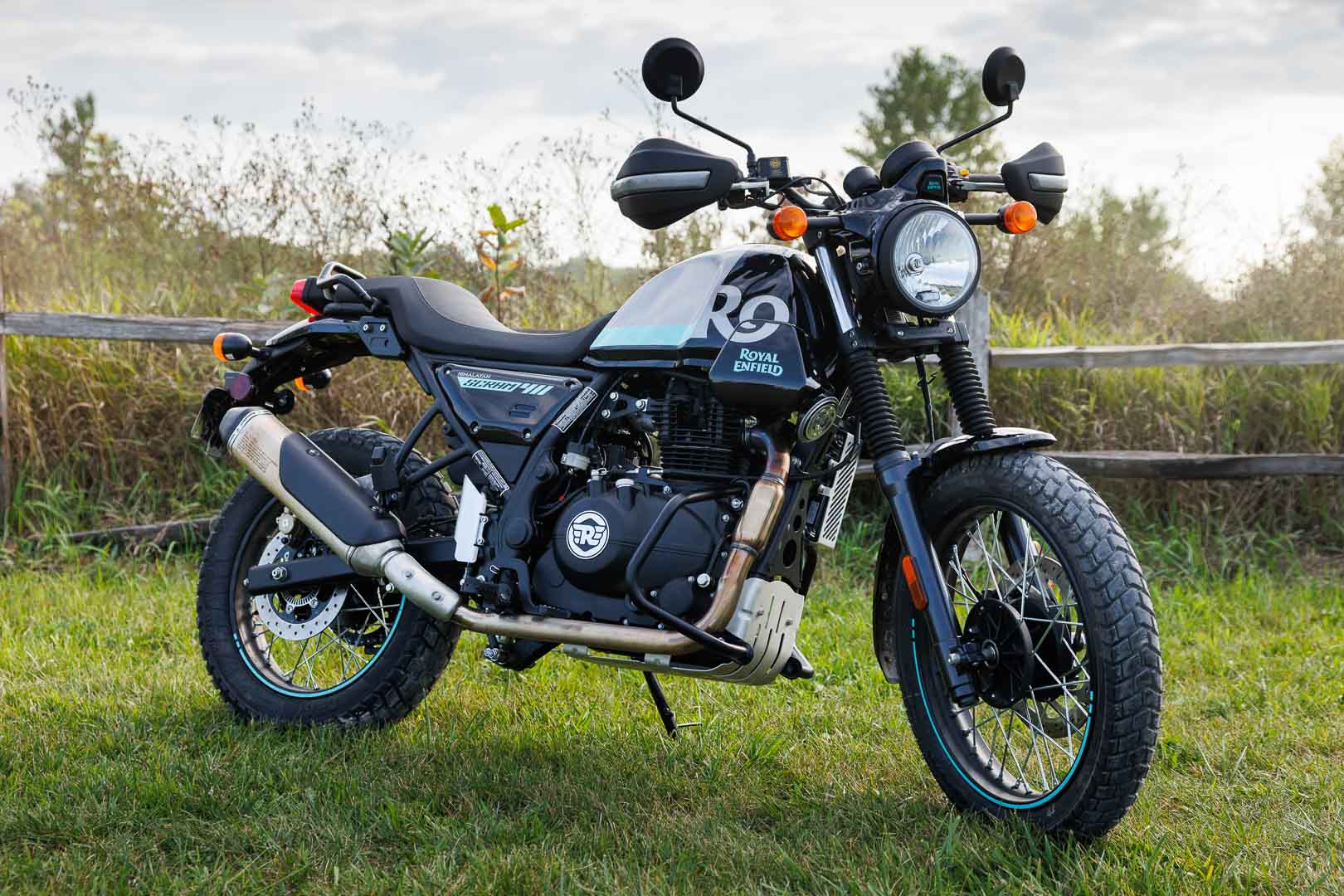 Perhaps Royal Enfield Americas Region President and Business Head Krishnan Ramaswamy summed it up best when he said, “We focused on building a motorcycle that gives you everything you need and nothing you don’t. We wanted to make the Scram accessible in terms of light weight, usable power, reliability, ease of operation, and affordable purchase price.”At the launch event for the 2023 Royal Scram 411, I put that philosophy and the resulting product to the test. The event started at the Royal Enfield North America headquarters in Milwaukee and included two days of riding into Wisconsin’s stunning Driftless Area—clear across the state from Milwaukee! In all, I rode the Scram over 400 miles in urban and rural riding conditions, on pavement and gravel, in wet and dry weather—quite a menu to offer, when you think about it.On Milwaukee’s downtown and suburban streets, which still had wet pavement from morning rains and intermittent showers, the Scram was agile and just plain fun to ride. 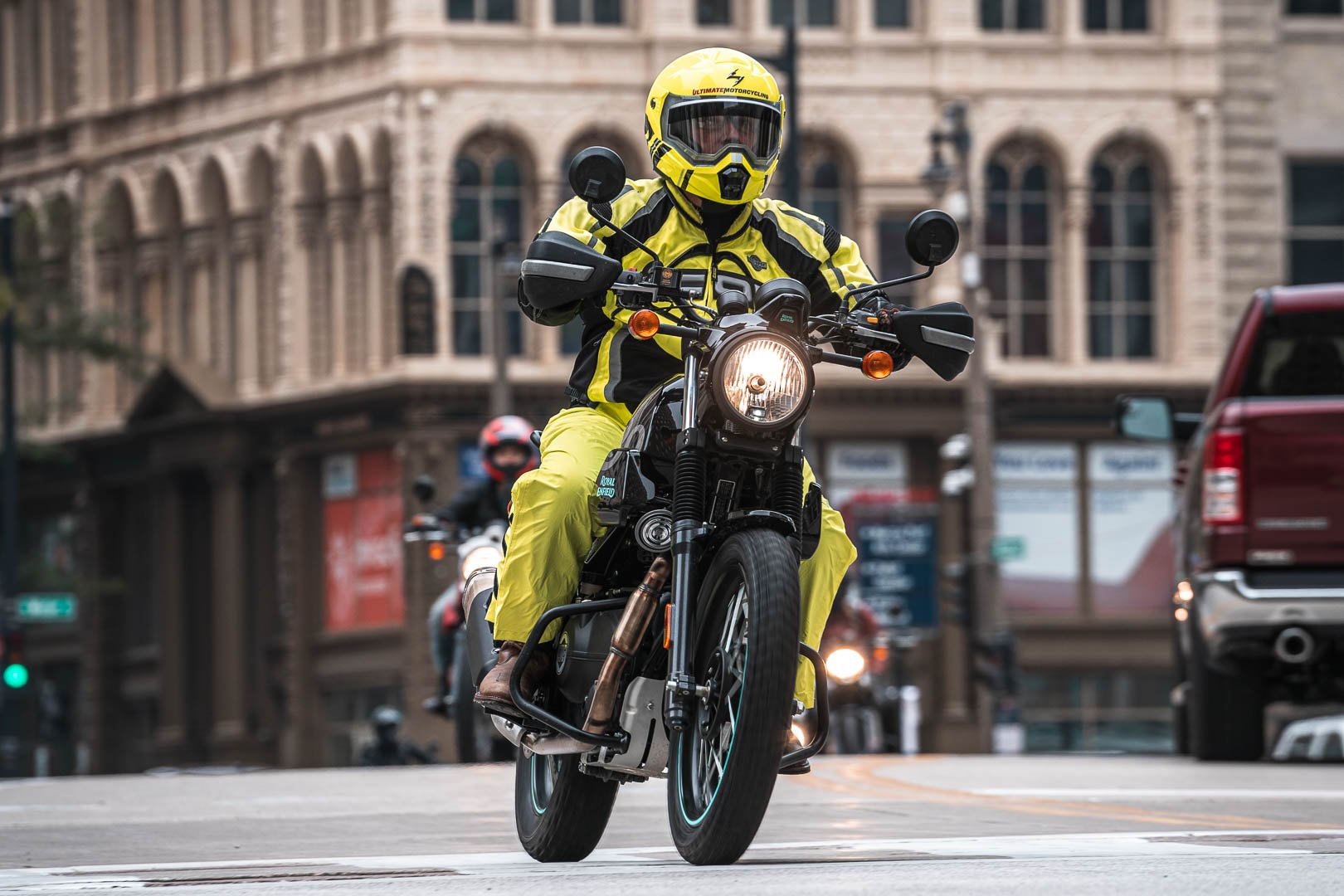 Hard braking in city traffic on a couple of occasions created no problems and no skids. Braking is from ByBre—a subsidiary of Brembo—and features dual-channel ABS and steel-braided lines. The braking system teams up with the Ceat dual-purpose tread tires to provide straight, stable, swift stops every time. Cornering and braking are equally predictable, even on wet pavement. Unlike the Himalayan it is based on, the ABS on the Scram is always on.From Milwaukee, the route took us northwest out of the city into the scenic farmland of the Kettle Moraine region. Plenty of hills and corners afford occasions to twist the throttle and see what the Scram’s 411cc four-stroke SOHC motor has on tap.The two-valve, long-stroke, air-oil/cooled, fuel-injected engine is counterbalanced to minimize vibration. Claimed crankshaft output is 24.3 horsepower at 6500 rpm, with maximum torque cited as 23.6 ft-lbs at 4250 rpm. The upswept exhaust produces a mellow tone at idle, and has a pleasing throb at highway speed. 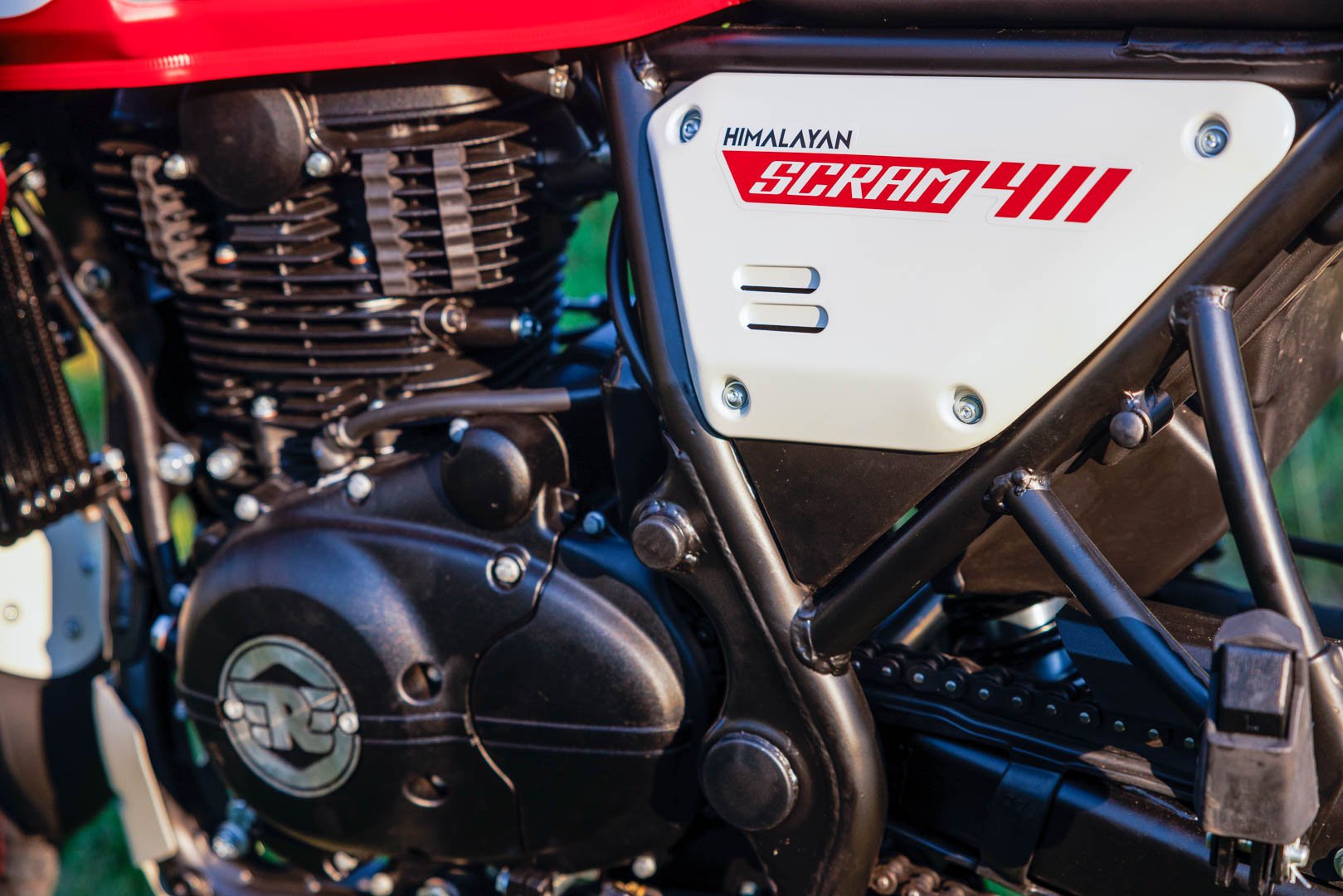 The chassis is a half-duplex, split cradle unit designed by Harris Performance, based in Hereford, England, near the Welsh border. Harris Performance was acquired by Eicher Motors, the parent company of Royal Enfield, in 2015. Although much of Harris’ work focuses on the Royal Enfield product line, Harris also supports work with other brands.Out on the open, rural two-lane road, the newly developed one-piece stepped seat delivers a comfy all-day ride. At five-foot-six, the 31-inch seat height works well for me in stop-and-go traffic, and the ergonomics are just about perfect. Riders over six-foot will likely feel cramped.For a daily commute, the suspension provides an excellent ride. The 41mm fork has a 7.5-inch stroke, and the linkage-assisted shock modulates seven inches of rear wheel travel. The 2023 Royal Enfield Scram 411’s suspension handles the washboard surface caused by frost heaves that never seem to go away from some Wisconsin highways. 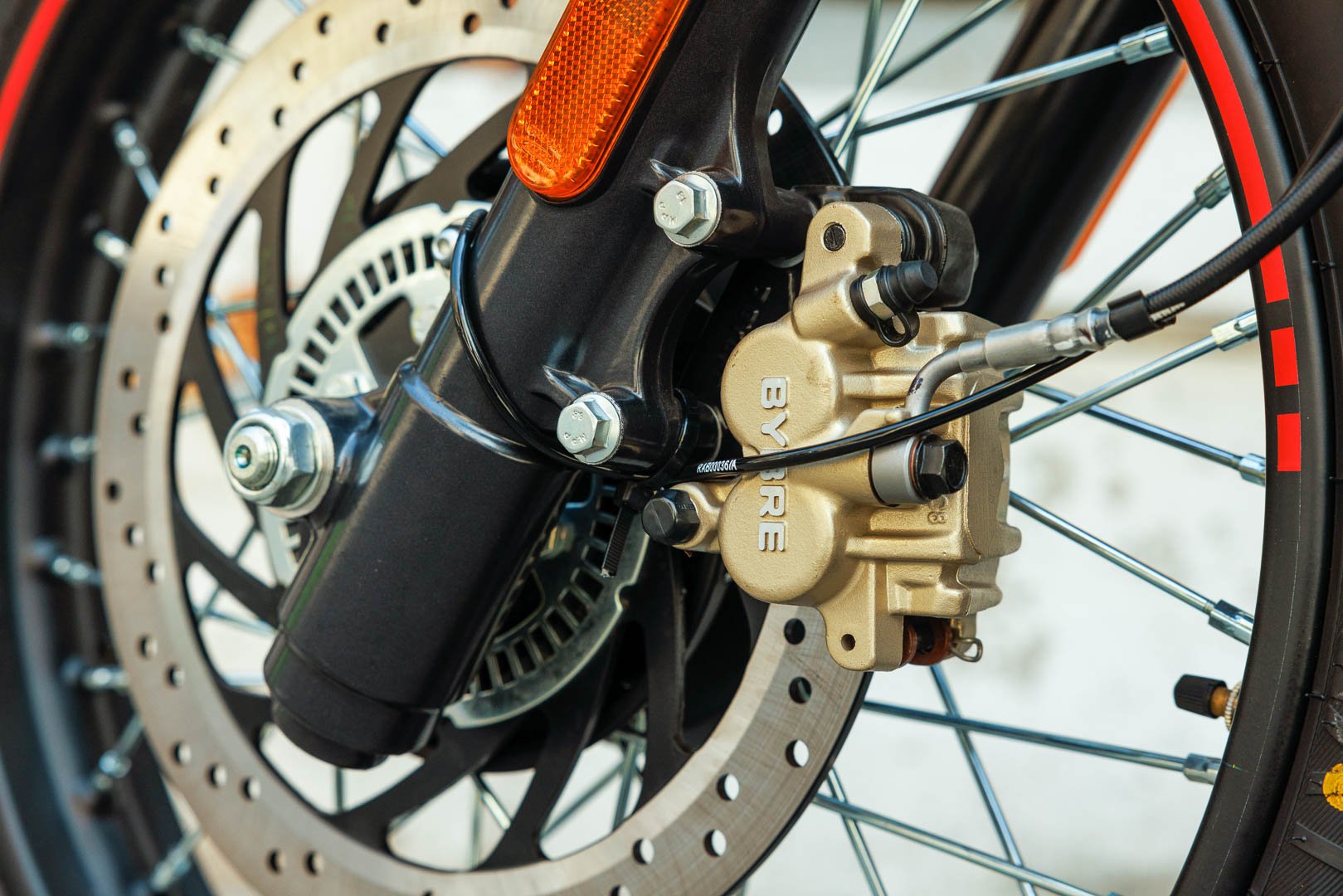 The suspension shows weakness in high-speed cornering, even when the pavement is smooth. At highway speeds and above in long sweepers, a mild oscillation of the bike begins and becomes more pronounced as the speed increases or the turn gets tighter. The first time it happens, it is a little disconcerting, making you wonder if it portends a full-on tank-slapper. It never did, but it’s a good thing to be aware of. As speed decreased, the oscillation resolved itself.Instrumentation is clear and simple, much to my taste. There aren’t multiple ride modes and other settings to adjust or be aware of. An analog speedometer, framing an LCD panel for the fuel gauge, odometer, and gear position. The digital display readouts are somewhat small, but that is a minor issue, and there is no tachometer.The switchgear is also simple and traditional, though the operation isn’t perfect. The turn signal switch can feel like it clicked the signal off but didn’t. I found myself double-checking the instrument display after each use of the turn signal to make sure it canceled. If the switch is not exactly in the mid-position, pushing it in to cancel the signal gives a mild click, but doesn’t cancel it. Sometimes it took three cracks at it to make it work, though I had better success after some practice. 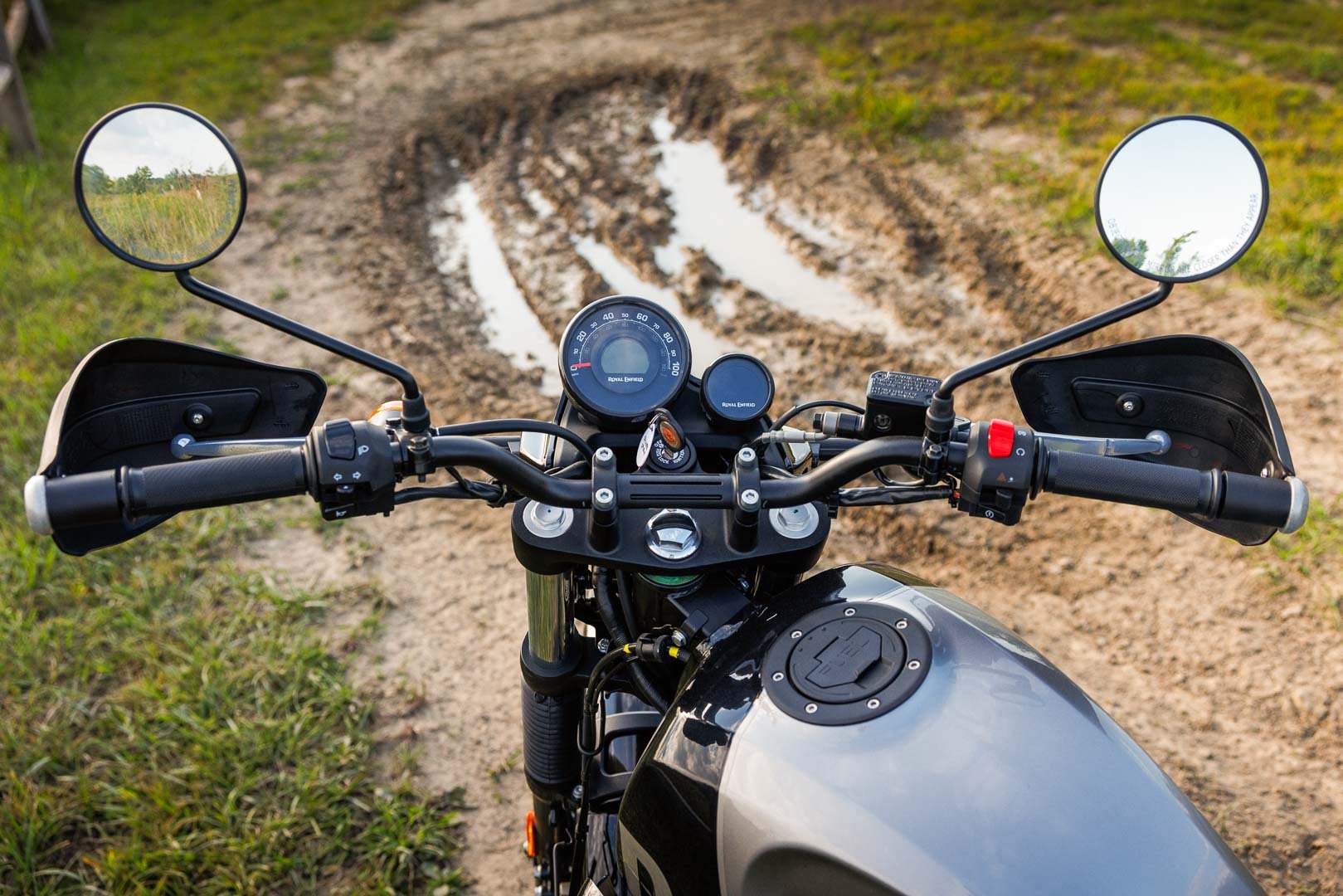 Once I got across Wisconsin and into the spectacular Driftless Area, I spent more time on lane-and-a-half wide blacktop township roads and into some gravel. Meandering at moderate speeds on those road surfaces is where the 2023 Royal Enfield Scram 411 shines. It feels planted and predictable, even on roads with recently applied gnarly class II crushed gravel, making the surface akin to riding through a road covered with ball bearings. It got me wondering; who ever thought crushed gravel was a good thing to make a road surface out of, anyway?The brakes created no unpleasant surprises, even when having to scrub off speed going into a 90-degree left-hander at the bottom of a steep hill with the aforementioned gravel present. Handling on clay/dirt/gravel roads is excellent when traversing the serene Amish farm country.After a relaxing overnight stay in the Hickory Hill Motel in Viroqua, my ride included more backroads on varied road surfaces, plus a stop at S&S Cycle in Viola. The R&D/manufacturing facility is tucked away in the verdant valleys of the Kickapoo River. It houses a remarkable company museum and some advanced manufacturing and design operations that reach product lines for Harley-Davidson, Indian, and Royal Enfield, among others. The S&S Slip-On Mufflers in the Royal Enfield accessories catalog for the 650 twins look great.

With about 200 miles of riding experience behind me, I felt more confident about pushing the Scram a little harder. That meant accelerating more aggressively, running through the five-speed a little faster, exploring the speed range a little more, and pushing the handling and braking envelope.Under wide open throttle, there was not a hint of hesitation when changing gears, and the Royal Enfield transmission never a missed shift. The clutch is light, and engagement is progressive.The only transmission flaw occurred once. The neutral light came on at a stop, as expected when I wanted neutral. However, as I let the clutch out, the transmission was still in gear. 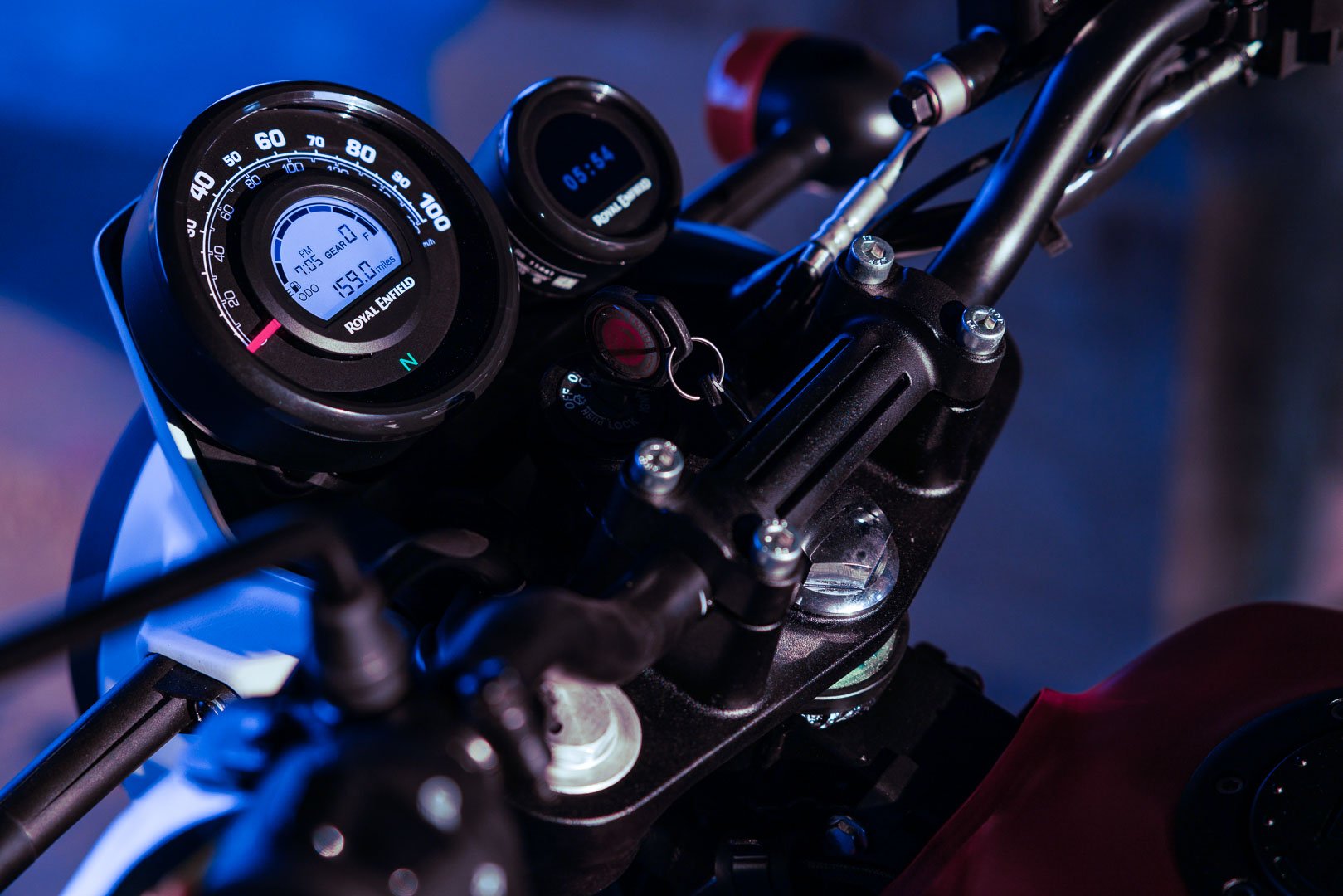 During this phase of the ride, I swung south to head back to Milwaukee on a stretch of what is termed “rural interstate” highway—that is, four-lane. The 2023 Royal Enfield Scram 411 is out of its element on interstate highways, where speeds are sustained 70+ mph. That is within the Scram’s top speed capability on level terrain, but just barely, and is not ideal for sustained ride time.Similarly, high-speed passing maneuvers require planning ahead. Downshifting from fifth gear all the way to third pops the revs up but doesn’t deliver the instant, hard acceleration you might want.Freeway riding would be fine for short distances as part of a daily commute, but the Scram is much happier in the 45 to 60 mph range. The engine doesn’t have to be wound up too tightly, vibration is not a factor, and the upright seating position works fine when not fighting the wind. 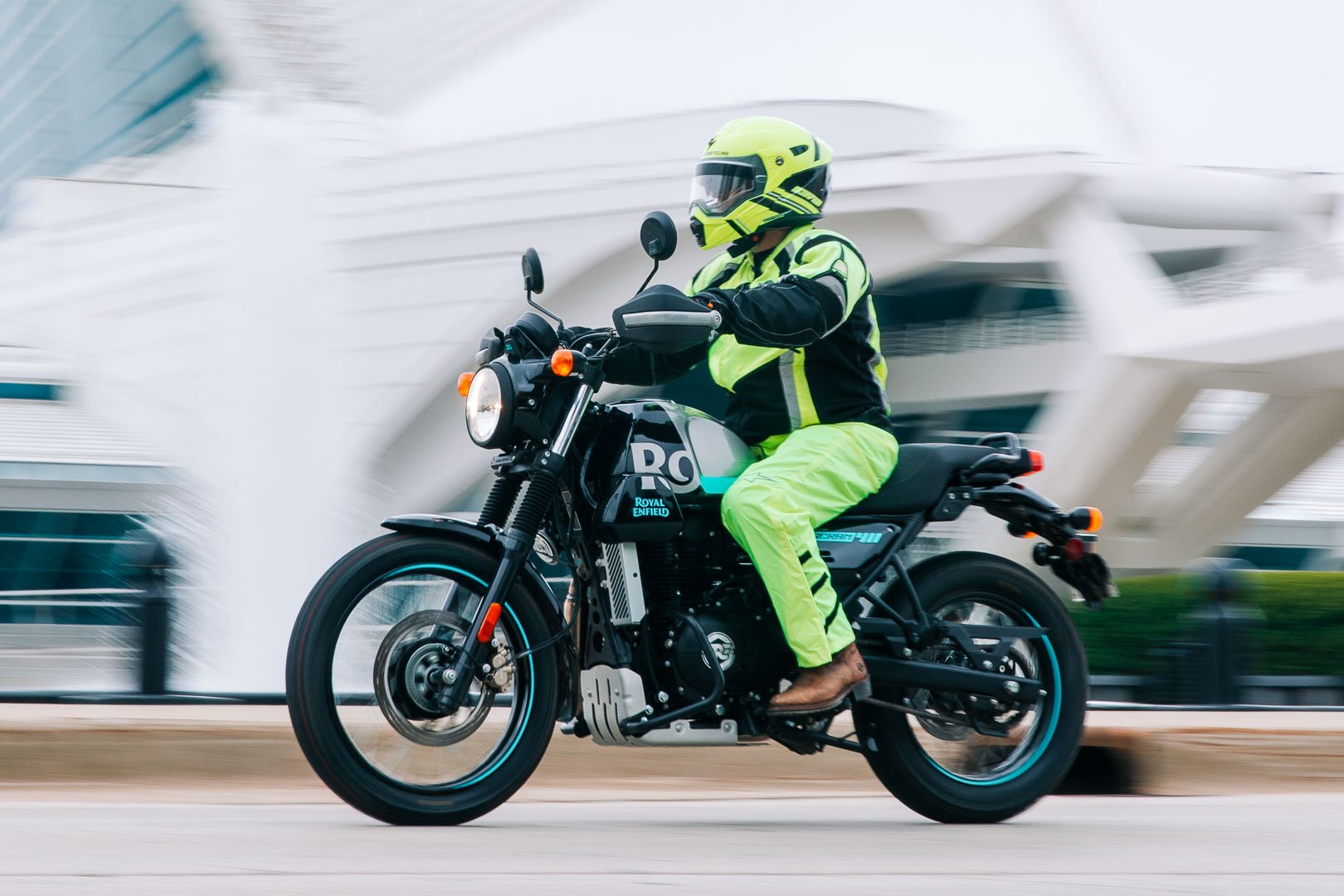 I couldn’t assess the 2023 Royal Enfield Scram 411’s fuel consumption on the ride. However, the motor seems to be very miserly with gasoline. With a four-gallon tank, if ridden in its intended element, a tank of fuel should go a long way.The appearance of the Scram 411 is clean and lean, with seven color/graphic combination options put together by Creative Lead and Group Manager Darlene Vogel. The only thing that got me wondering about the visuals was the small plate near the front of the fuel tank. In the product literature, it is termed an “urban badge plate.” At some level, it works as an extended tank badge, and may even offer some degree of damage protection for the fuel tank in the event of a drop.Royal Enfield Chief of Design Mark Wells explained that it is a design element to give the Scram a singular appearance and that hearkens to the mounting of a number plate in competition. He also indicated the plates utilize the mount points used for the tank guards on the Himalayan. All that said, I couldn’t help but wonder if the cost of that particular design element might well have been spared and nobody would miss it. Regardless, the quality of the bike’s fit and finish is excellent overall. 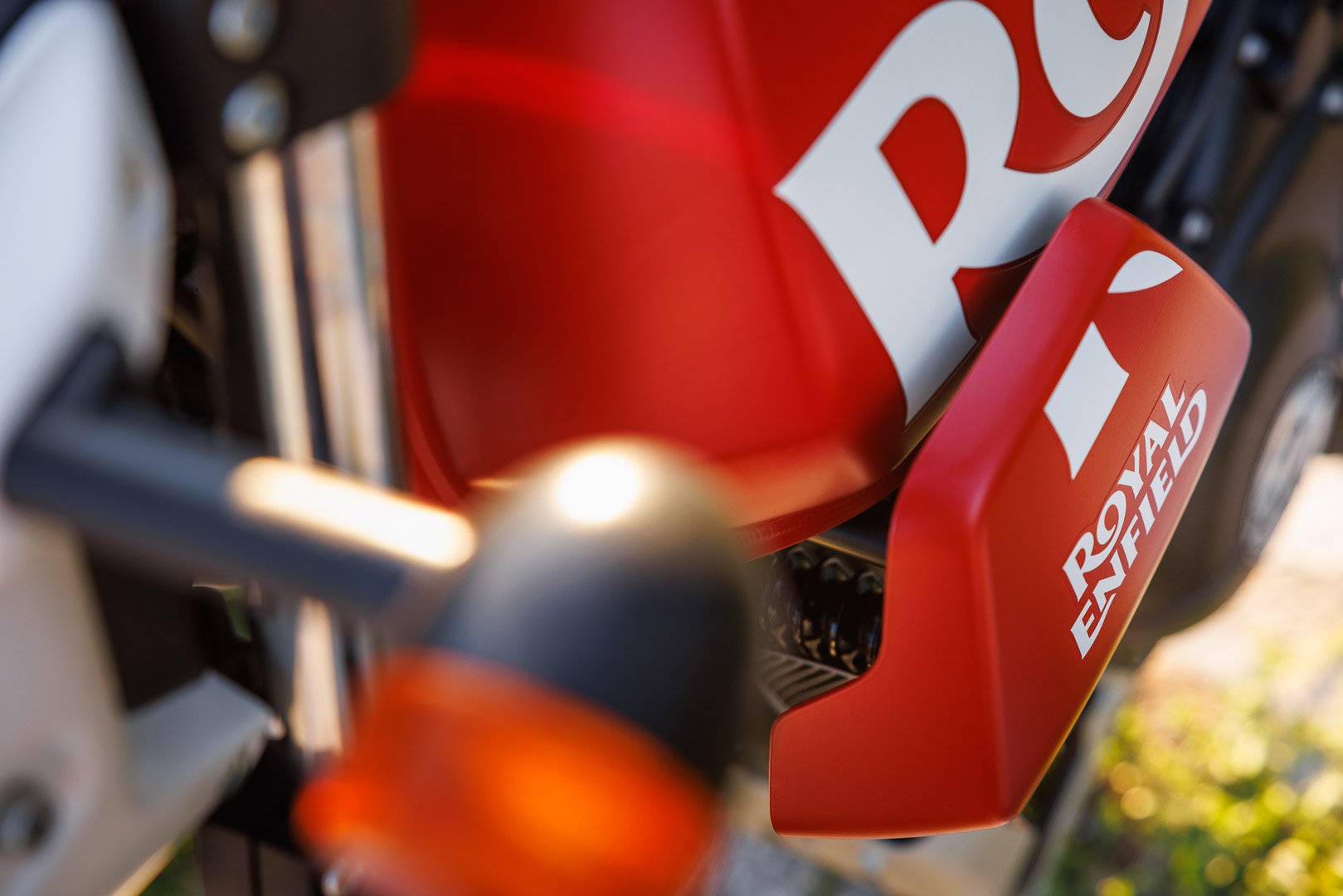 Optional equipment is already available, including the Black Airfly Evo engine guard ($136) and hand guards ($120) on my test Scram. A centerstand can also be added.Some may characterize the 2023 Royal Enfield Scram 411 as an excellent entry-level motorcycle, and it is all of that. However, I have been a motorcyclist for 48 years, have two liter-plus V4-powered motorcycles in my shed, and thoroughly enjoyed the Scram 411. Some may characterize the Scram as “underpowered,” which is true in the sense that it would be out of place at the Great Lakes Dragaway at Union Grove. 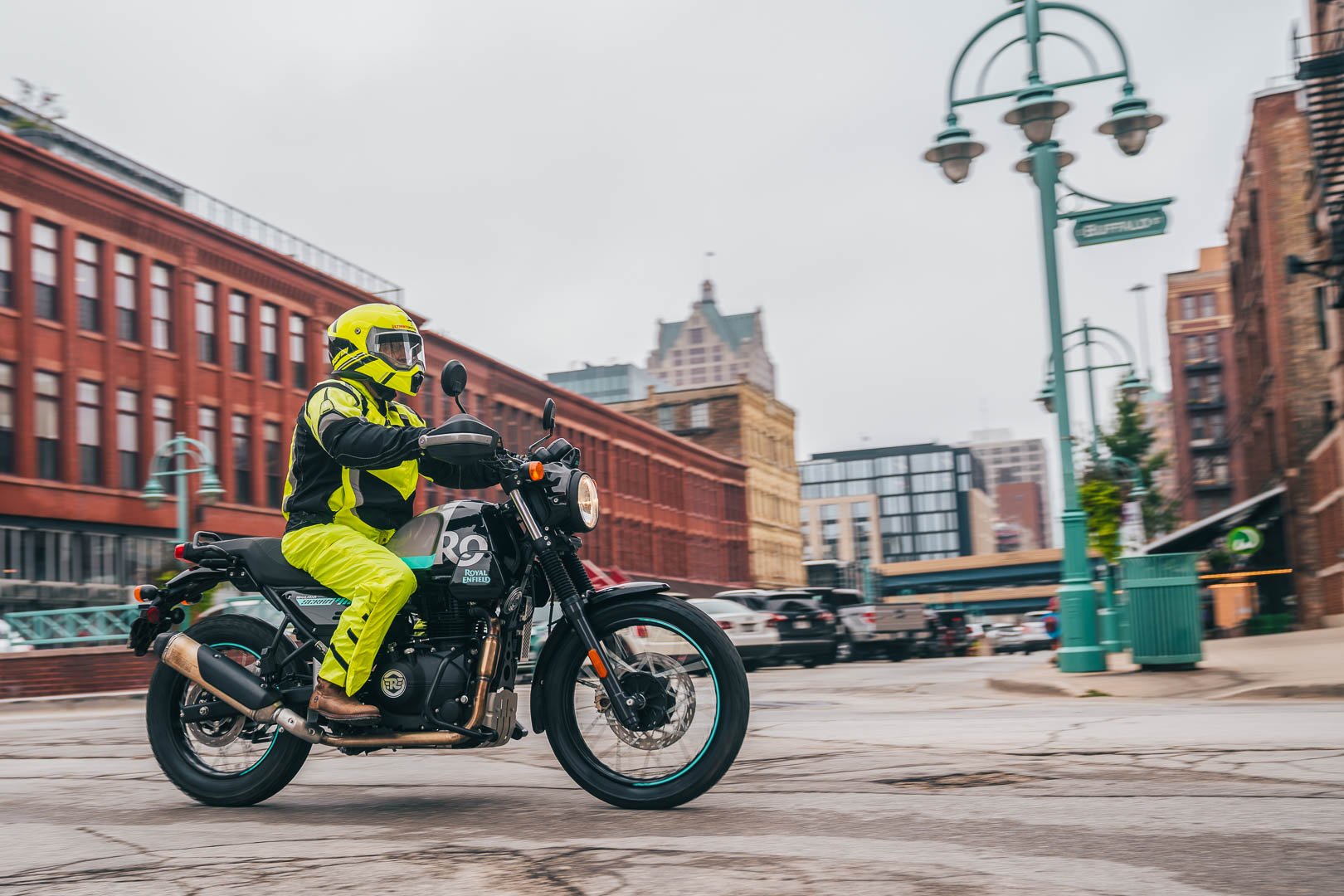 The Scram 411 is not designed for throttle-jockey, hot-rod riding. Instead, it is right-powered for the intended riding environment. If you want pavement-wrinkling horsepower at the rear wheel, keep looking. However, if smooth, predictable power that is available on demand and can match varied, less-than-perfect road conditions is what you’re looking for, then the Scram 411 is worth a look.It is clear that a lot of thought and experience have gone into creating the 2023 Roya Enfield Scram 411, including the aesthetics, ergonomics, a proven engine, drivetrain, chassis, and suspension. Given that it’s all backed up by a three-year, unlimited mileage warranty that includes roadside assistance, the Scram is quite a value at $5099. As Mr. Ramaswamy said, “Everything you need and nothing you don’t,” except maybe those little urban badge plates.Action photography by Brandon Brunch, Billy Klingsporn, and Joshua Shipps RIDING STYLE2023 Royal Enfield Scram 411 SpecsENGINECHASSISDIMENSIONS and CAPACITIESCOLORS 2023 Royal Enfield Scram 411 Price: $5099 MSRP ($5355, as tested)